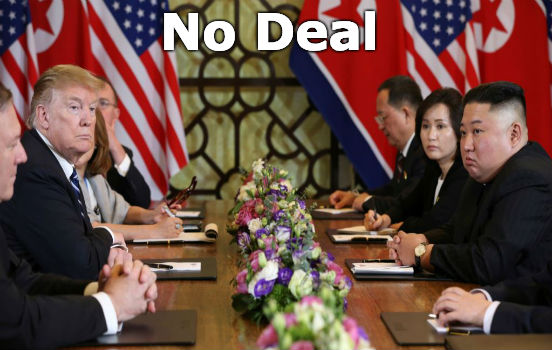 U. S. President Donald Trump flew all the way to Communist Vietnam this week to offer his friend Chairman Kim, the Communist dictator of North Korea, a TREMENDOUS DEAL: If Kim would forsake his nuclear weapons, the USA would not only drop its stifling economic sanctions but also help Communist North Korea become the financial success that Communist Vietnam has become since that now-thriving nation became united after defeating the USA in the bloody Vietnam War that usurped USA blood and treasure from the 1960s into the 1970s. WONDERFUL!!! But Kim turned Trump's sweet offer down, so it was "No Deal." That journey to Hanoi was 12,000 miles. But 100 miles off the eastern coast of the USA no Republican president is allowed to talk with the island of Cuba while ALWAYS...since January of 1959...trying to starve, terrify, attack, etc., Cuba for the purpose of returning control of the island back over to the current capital of the BATISTA-MAFIA DICTATORSHIP, which now happens to be Little Havana in Miami, Florida. Since 1959 Americans have been propagandized not to consider such basic facts but we are daily proselytized to pretend there is no sub-government, or transplanted dictatorship, within the bowels of the USA democracy. But, truth be told, that's where we are today -- in the first week of March, 2019. 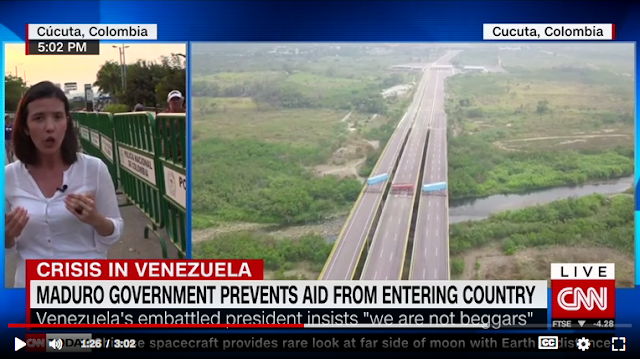 The "Crisis in Venezuela" portrays Venezuela's embattled President Nicolas Maduro as heartless {and desperate} for refusing badly needed food, medicine, and other necessities from reaching destitute citizens in that oil-rich Latin American nation. And that perception is correct. 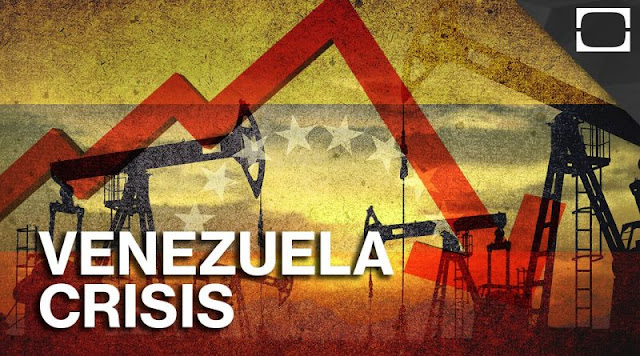 But there is another perception that is also correct: The history of the USA's imperial and even genocidal lust to dominate Latin America should rule out another Republican administration in Washington, TRUMP'S, from influencing any potential solution to the Venezuela Crisis. There is a MYRIAD of less-biased negotiators. 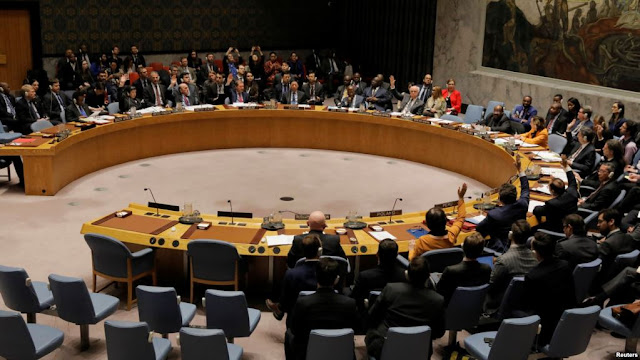 This session at the United Nations on Thursday -- Feb. 28, 2019 -- addressed the Venezuelan Crisis. The 15-nation Security Council, led by the U. S., voted 13-to-2 to end the Maduro government and replace it, supposedly, with a U.S.-friendly government. But the two dissenting votes -- from Russia and China -- were enough to block/veto that ruling. While the UN is the logical body to broker international disputes, the fact that a handful of powerful nations have veto power negates the UN's effectiveness. For example, also Thursday the supreme U. S. ally, Israel, was widely condemned by the UN for "crimes against humanity" in a ruling that said Israel fatally shot innocent Palestinians including "children." Like Thursday's Russia and China veto regarding Venezuela, the U. S. routinely vetoes/blocks any such UN condemnation of Israel, for example. Superpower veto power hurts the UN. 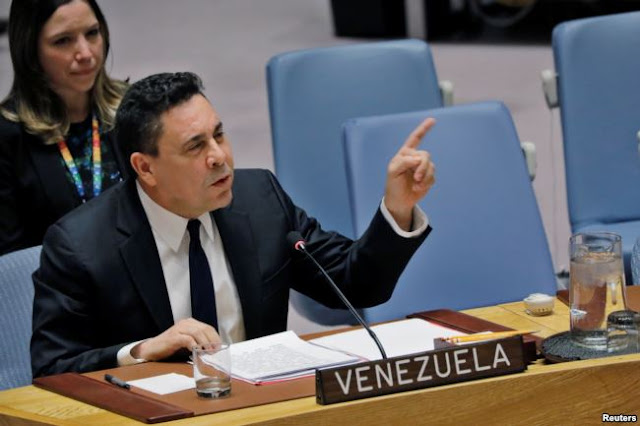 At yesterday's UN session, this is Venezuela's and Maduro's Ambassador to the UN, Samuel Moncada, vividly pointing a finger at the United States for instigating "another genocidal coup in our region." He also said, "The threats against peace in Venezuela come from abroad, meaning Miami and Washington, and it is the U. S. sanctions and the coup-meddling USAID, posing as a sanctimonious humanitarian organization, that is harming and trying to starve the Venezuelan people." Yesterday's image of Maduro's man, Samuel Moncada, speaking so forcefully at the United Nations is interesting...because most people expected both Maduro and Moncada to have been eliminated BY NOW. 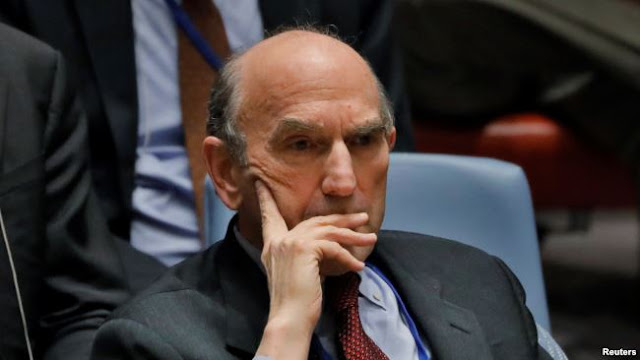 But this image at the United Nations explains why the U. S. being perceived as orchestrating the solution of the Venezuelan Crisis is not likely to be either bloodless or short-lived -- or minus continuing revolts or revolutions. This is Elliott Abrams who has INCREDIBLY been named by President Trump as "America's Special Envoy to Venezuela." While Americans are not supposed to know why President George H. W. Bush pardoned Abrams, Latin Americans believe that Abrams was tightly tied to some of the most genocidal atrocities in Latin America's history, including one of the region's all-time most egregious massacres of men, women, children, and babies. American citizens and even the left-wing mainstream U. S. media may be too afraid to question Trump's "Special Envoy to Venezuela" but, believe me, even U.S.-friendly Latin American nations cringe just to think about it. Also, Abrams is a vivid reminder that perhaps the ten still-living most anti-Cuban zealots from the Bush dynasty...such as Abrams, John Bolton, Otto Reich, Mauricio Claver-Carone, Jason Poblete, Jose Cardenas, etc., etc...have been maneuvered into a cabal by unchecked anti-Cuban zealot Marco Rubio to dictate the Trump administration's policies regarding Latin America and, especially, regarding CUBA, which is Rubio's obsession. Heading into this weekend, for example, it appears that Poblete and Cardenas are doing handstands about Trump putting Cuba on the Sponsors of Terrorism list and activating Title Three of the Batistiano-driven {Havana-born Jorge Mas Canosa and Havana-born Lincoln Diaz-Balart} and infamous Helms-Burton Bill. Not even the Little Havana-aligned Bush presidencies went that far but now that Trump has resurrected long-ago extremists such as Elliott Abrams, Poblete, Cardenas, and their ilk, THEY have reason to be doing handstands heading into the first weekend in March-2019. 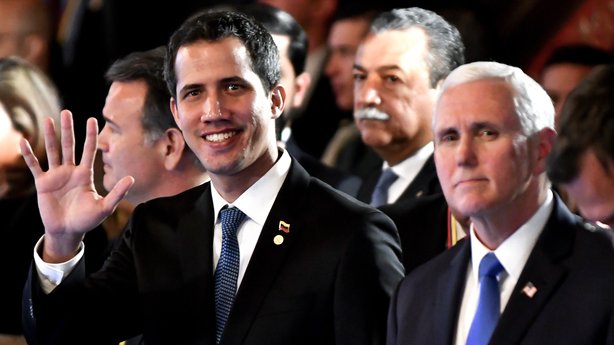 This photo of Juan Guaido, the self-ordained and U.S.-backed President of Venezuela, shown with U. S. Vice President Mike Pence also sends some shivers down the spines of some Latin Americans. History registers the fact that Republican administrations since the 1950s have all proclaimed the USA's dire need to force DEMOCRACY on Latin American nations WHILE all the while supporting and in some cases installing murderous U.S.-friendly dictators such as...Batista in Cuba, Trujillo in the Dominican Republic, Somoza in Nicaragua, Videla in Argentina, Pinochet in Chile, etc., etc. As a democracy-loving American, I wish that was not so, but it is. 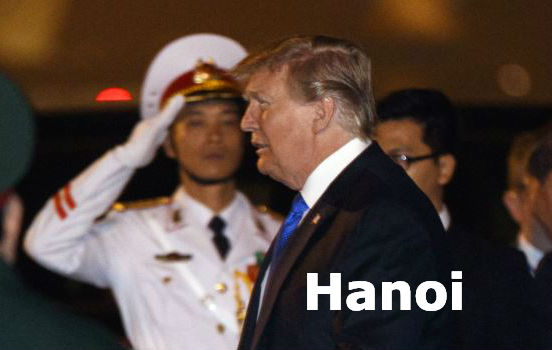 Meanwhile, President Trump has just returned from Communist Vietnam where he met again with his beloved Communist dictator Chairman Kim, promising Kim as the world watched that the U. S. would help Communist North Korea become the "fantastic economic success" that Communist Vietnam has become since winning the Vietnam War. Well, folks, that also reminds the world that in the 1950s the U. S. didn't win the bloody Korean War AND in the 1960s and 1970s the U. S. didn't win the bloody Vietnam War...despite vast costs to the U. S. in both blood, treasure, and reputation. Also, in support of Batista and the Mafia, the U. S. didn't win the Cuban Revolutionary War that ended way back on January 1, 1959. So...you might ask...what is the difference from the U. S. perspective today between KOREA, VIETNAM, and CUBA? Well, the short and accurate answer is this: No overthrown dictatorship in Korea or Vietnam or anywhere else ever fled to U. S. soil and...quickly and permanently...reestablished itself within the bowels of the U. S. democracy. Of course, if that is not so, go back and explain the Trump-Hanoi photo above or any of the other photos directly before it.