IT IS NOT WHAT AMERICANS ARE TOLD!! 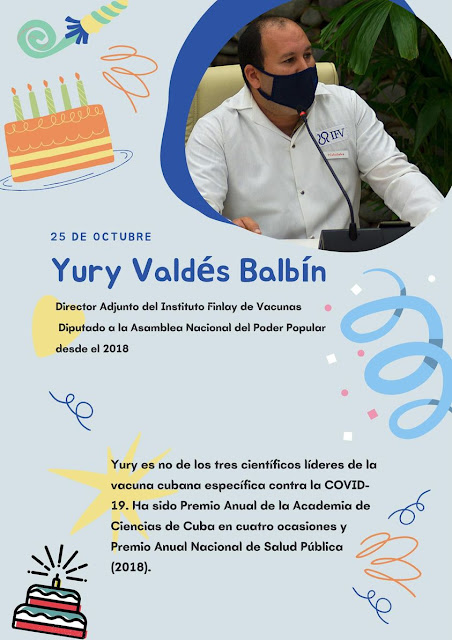 Today -- October 25th-2021 -- the graphic above depicts what Cubans on the island are concerned about, which entails healthcare and education and the Pandemic and the Blockade and other current Perils & JOYs that affect their lives. Cubans on the island today -- October 25th-2021 -- are, for example, lavishly celebrating the birthday of Yury Valdes Balbin because he is the Director of the renowned Finlay Institute that leads the island's fight against COVID-19...and that happens to be a fight that Cuba is finally winning thanks to vaccines produced by the Finlay Institute. 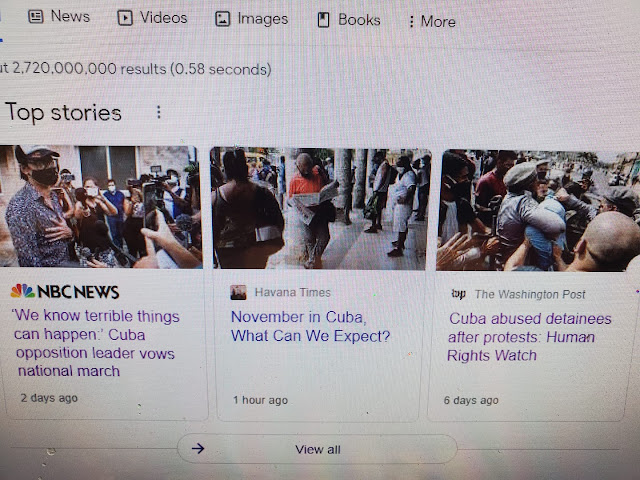 Of Course, today -- October 25th-2021 -- Americans are only saturated, as usual, with doomsday reports about Revolutionary Cuba's imminent demise, as shown above. And, of course, since 1959...a rather long time ago...Americans are never told what everyday Cubans on the island actually are feeling, JUST WHAT extreme Counter Revolutionary Cubans in Cuba, Miami, Newark, and Washington are feeling!!! As a Democracy-loving American, I believe that says a heck lot more about the United States than it says about Cuba. For example, instead of promoting and justifying the upcoming Coup in Cuba on November 25th-2021 that will finally overthrow Revolutionary Cuba, perhaps the U. S. media and the well-funded U.S.-based & Cuba-based anti-Cuba digital blogs should explain to the American citizens and tax-payers why thousands of other well-funded coup-attempts since 1959 have been unsuccessful. Could that possibly be because that, since 1959, there have always been enough everyday Cubans on the island who actually don't want the return of foreign dominance such as the U.S.-backed & Mafia-backed Batista dictators who ruled the island PRIOR TO 1959???? I'm Just asking, of course, because I believe sometimes the U. S. media might one day permit an opinion of an everyday Cuban on the island that HAPPENS TO not to be AN EXTREME COUNTER REVOLTUIONARY CUBAN THAT IS PROFITING FROM ALL THE ATTEMPTS OF OVERTHROWING THE...uh...Revolution!!! 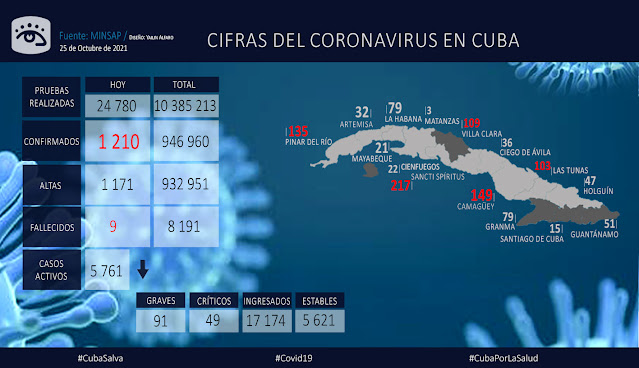 Earlier this month the daily COVID-19 statistics were devastating for the Cuban people who also believed that the pandemic raging in Cuba was encouraging fresh Miami-inspired attempts to overthrow their government. But today -- October 25-2021 -- the COVID-19 statistics are making Cubans on the island rejoice about new COVID numbers and about the positive results being reaped from the Finlay Institute's Cuba-produced vaccines. As shown above, in the past 24 hours Cuba has had just 9 COVID deaths and that single digit number is startling compared to the devastation of previous months. So just 9 deaths along with the other details and numbers shown above today are rejoicing for Cubans in Cuba. 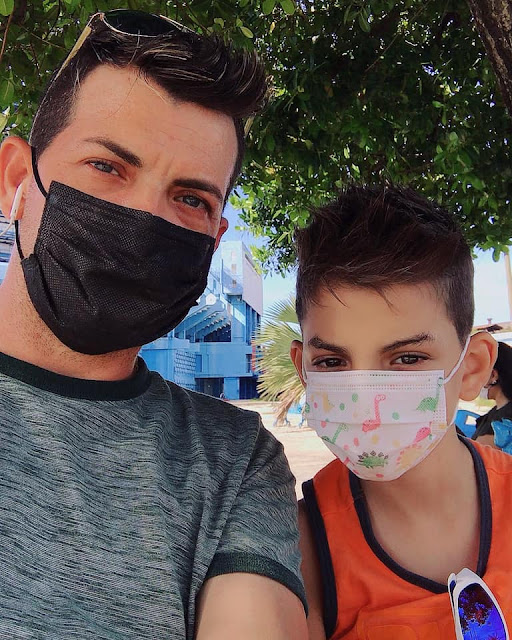 Like other young fathers {and mothers} on the island of Cuba today -- October 25th-2021 -- this young father has positive opinions about the Finlay Institute and about the effort that the Revolutionary government is trying to do to combat the twin perils of the Pandemic and the Blockade. Yet, as far as Americans are told, this young father is not permitted to express his opinions about anything happening day-by-day on the island of Cuba...and that it is where he chooses to live and raise his son!!! 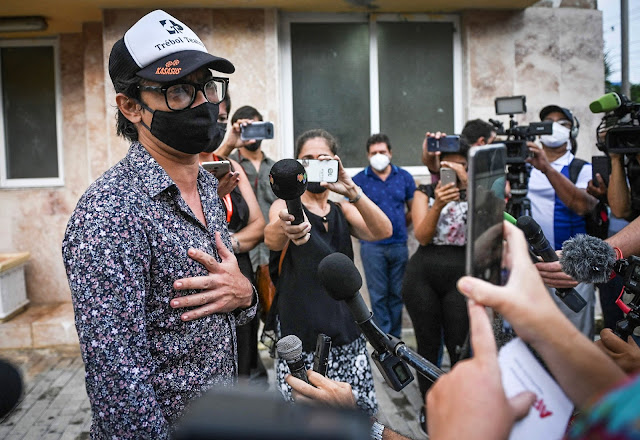 On the other hand, if you are a Cuban on the island named Junior Garcia and you plan to lead an anti-Cuban insurrection on the island planned for November 15th-2021, the U. S. media will saturate their pages and airways with propaganda that says this coup will likely succeed because just about EVERYONE of the 13 million Cubans on the island will SUPPORT Junior Garcia, not the Revolutionary government. Of course, if such propaganda was true the Cuban Revolution would have been overthrown many decades ago, starting in January of 1959. 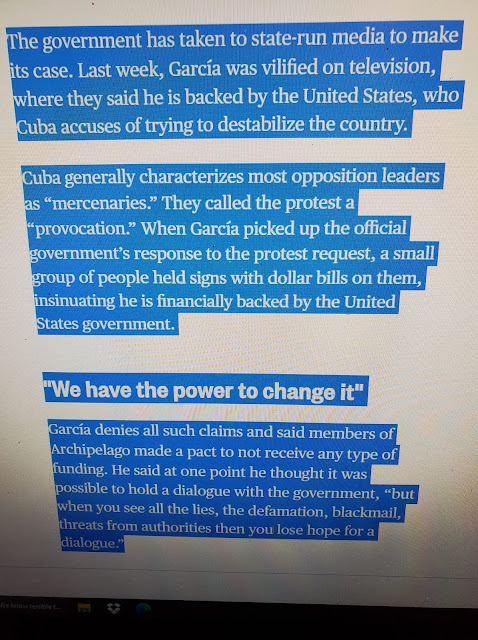 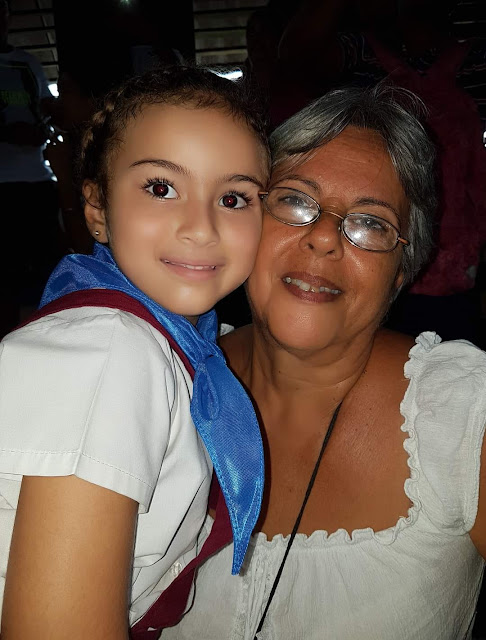 As far as the U. S. media is concerned, the only people who have opinions about Cuba are extreme Counter Revolutionary Cubans in Cuba, Miami, Washington, etc. The Grandmother shown above who is direly concerned about her Grand-daughter remembers Batista's Cuba and she has lived all these decades in Revolutionary Cuba. And, yes, she has opinions about the island. I believe it is an injustice to the Americans in the USA for neither the U. S. media nor the U. S. government to pretend that this Grandmother on the island doesn't have opinions on...the Blockade or the Pandemic or anything else regarding Cuba and its Superpower neighbor that is just a hundred miles away. 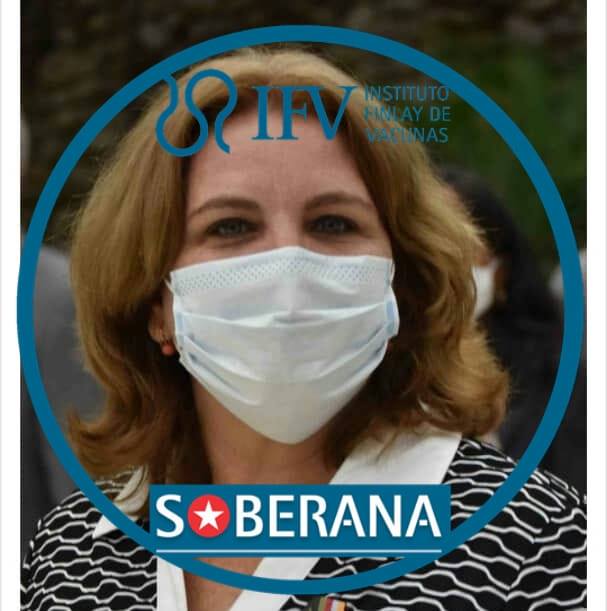 This mother in Cuba posted this photo on Social Media because she believes a Cuban-produced COVID-19 vaccine will help protect her family. So, she has opinions on the island that don't concern taking part in the overthrow of her government on November 25th-2021. And, I think, it is America's shame, not Cuba's, that neither the U. S. media nor the U. S. government believes that this Cuban mother on the island doesn't have opinions about such things as...the Pandemic, the Blockade, President Diaz-Canel, President Biden, etc., etc. And the fact is...she does have opinions too, just like Junior Garcia.