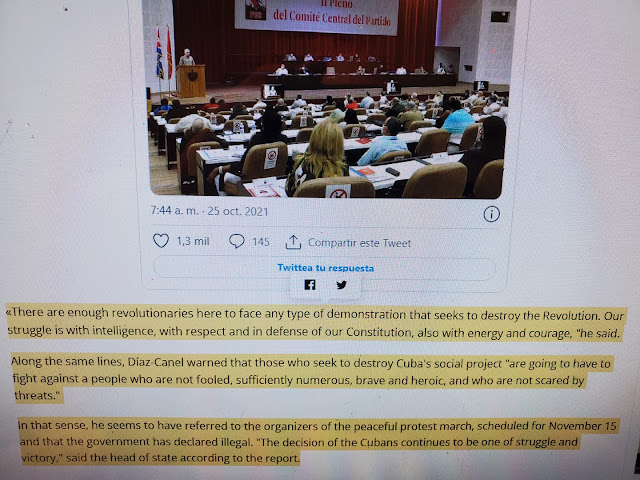 Today -- on October 26th-2021 -- the top leaders of Cuba made major and very topical speeches before an important session of the Cuban Parliament in Havana. The island's top leader -- Miguel Diaz-Canel -- reported that, "Thanks to our own scientists and vaccines we are winning our battles against the Covid-19 pandemic. And because of our own revolutionary citizens, we will win our battles against the herculean and well-funded efforts of the leaders in Miami and Washington to destroy our sovereign nation and our Revolution that, in 1959, was able to defeat a ruthless dictator, the Mafia, and the United States. We must now be as heroic as were our revolutionaries from 1953 till 1959."
Then...in the three sentences shown above...President Miguel Diaz-Canel spoke directly about the next highly publicized "Protests" set for November 15th-2021 that he believes will "again" be organized and conducted by well-paid U. S. mercenaries. President Diaz-Canel told the Parliamentary members that they and the citizens must be prepared to stay peaceful "because" the mercenaries will try to provoke incidents in which they can video or photograph supposed police brutality "as always."
As you can see in the first sentence, President Diaz-Canel also said: "There are enough revolutionaries here to face any type of demonstration that attempts to destroy the revolution. Our struggle is with intelligence, with respect and in defense of our Constitution, also with energy and courage." 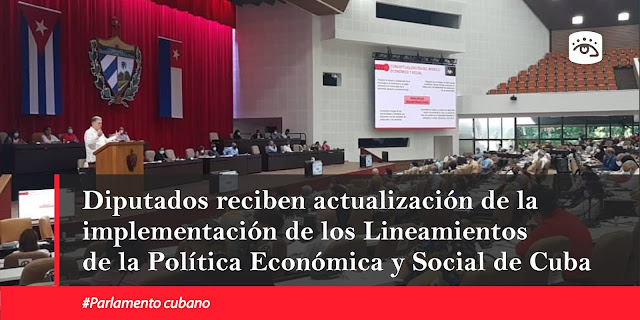 The very important Cuban Parliament {"Parlamento cubano"} session held today -- October 26-2021 -- in Havana focused on Cuba's two current prime perils -- the U. S. Blockade and the COVID-19 Pandemic. And clearly the Blockade and what it portends on November 15th-2021 garnered the most concern. 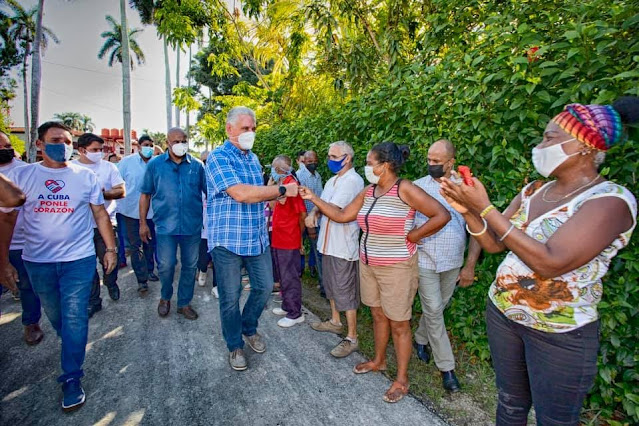 President Miguel Diaz-Canel believes that he is strongly supported by most of the 13 million everyday Cubans on the island. But, as he acknowledged today -- October 26-2021 -- during his speech to Parliament, that support will be tested again by the powerful Counter Revolutionary protests set for November 15th-2021. 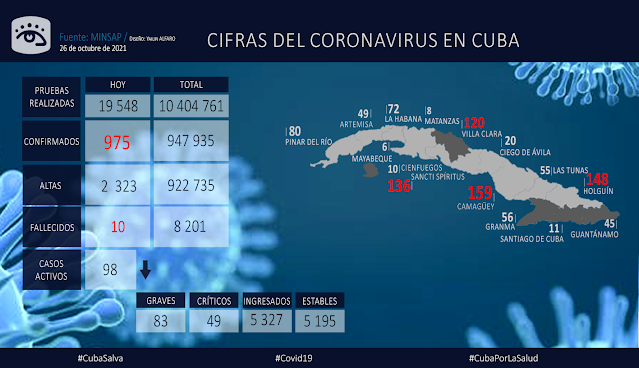 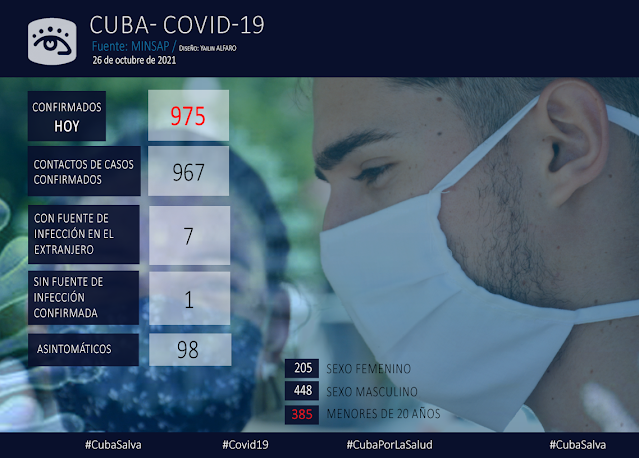 Meanwhile on October 26-2021, today the COVID-19 statistics as shown above continued to prove that Cuba's vaccination program is producing extremely encouraging dividends. In the past 24 hours the number of COVID deaths numbered 10 and the new cases were 975. Just a few weeks ago these numbers were vastly higher each day.

The renowned journalist for CBS News -- Portia Siegelbaum -- has lived in Havana for many years, and she is very impressed with the results Cuba is now getting from its own home-produced vaccines, which are sharply reducing the effects from COVID-19. Today Portia Siegelbaum proudly Tweeted: "Domestic created vaccines have positive impact." 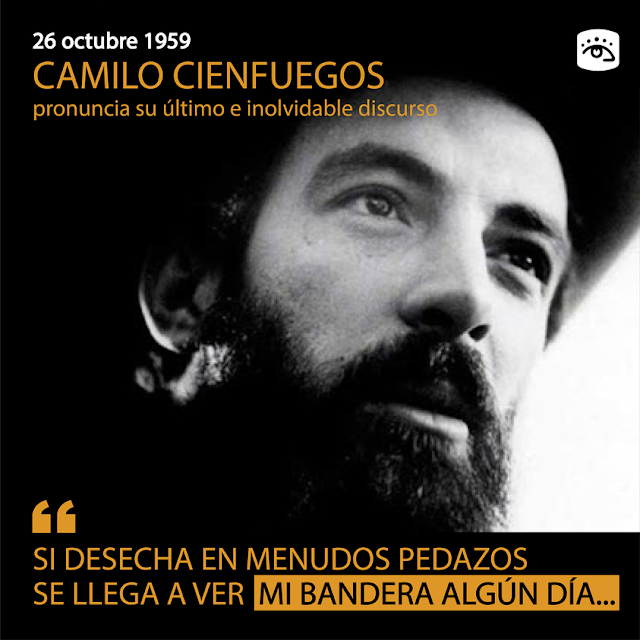 Also, across the entire island today Cubans are sadly remembering the 62nd anniversary of one of their most beloved revolutionary heroes -- CAMILO CIENFUEGOS!! In 1953 while in his early 20s, Camilo was planning on opening a clothing store in Havana. But instead he joined the Cuban Revolution and became one of the most important Commanders, famed for such things as his leadership in the Battle of Santa Clara, the rebel victory in the closing hours of 1958 that convinced Dictator Batista to flee Havana for safer havens before daylight on January 1, 1959. But then...at age 27 and wildly popular as a prime Revolutionary hero, Camilo died in the crash of a small airplane during a coastal storm on October 26th-1959, exactly 62 years ago today.