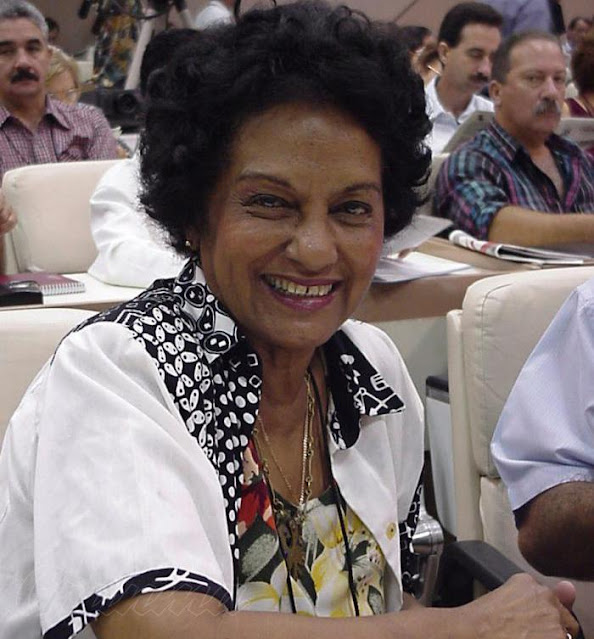 May 17, 1928: Santiago de Cuba.
October 4th, 2021: In Havana.
In 2004 the George W. Bush administration -- although a part of the vast Bush dynasty that was/is an important part of the Little Havana/Miami Counter Revolutionary U. S. assualts against Cuba -- allowed me to visit Cuba for the purpose of researching the incomparable revolutionary heroine Celia Sanchez...apparently because the Bush dynasty wanted to know why there were so many statues of Celia in Cuba but none of Fidel Castro.
Once in Havana the first person I asked to meet was Marta Rojas because I knew that Marta -- as a legendary revolutionary, journalist, author, and historian -- knew more about Celia Sanchez, Fidel Castro, and the Cuban Revolution than anyone on the planet. From the moment I met Marta she became a lifelong friend that I have treasured. Yes, tirelessly Marta spoke to me about Celia Sanchez, Fidel Castro, and the Revolution. Then when I returned to my home in Wyoming, Marta and I exchanged many emails between Havana and Laramie pertaining to my biography of Celia Sanchez that was published in 2005. Among other things, Marta emailed me a copy of the obituary that she had written and was published on the Front Page of Cuba's main newspaper, Granma, when Celia Sanchez died of cancer on January 11, 1980.
Needless to say, for the decades since 2004 I stayed in touch with MARTA ROJAS as best I could, especially on her birthdays. So, this has been a sad week for me since last Monday -- October 4th-2021 -- when she died at age 93 in Havana. Three years ago on Marta's 90th BIRTHDAY I wrote the following tribute to MARTA ROJAS in which I tried to explain what she meant to me and to the world. That tribute is re-posted here today:
cubaninsider: A 90th Birthday for Marta Rojas:     A great Cuban has celebrated a great birthday on the island.  Marta Rojas turned 90-years-old a few days ago. She was born on Ma...
Thanks for CARING about her
- October 08, 2021