U.S. Gets Closer to Cuba

Even Geographically, It Seems!! 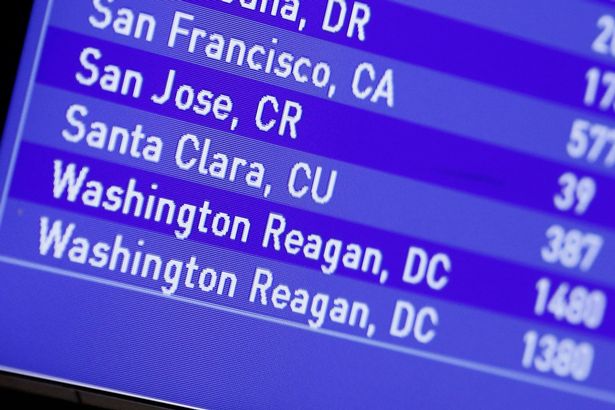 The photo above depicts an electronic sign yesterday -- August 31st -- at the airport in Fort Lauderdale, Florida. It's an historic photo for Cuba, America and sanity. Notice the "Santa Clara, CU 387" reminder for passengers preparing to board JetBlue Flight 387 bound from Fort Lauderdale to Santa Clara in central Cuba. It marks the first time since 1961 that a U. S. commercial airplane has been permitted to fly to Cuba. MOREOVER, it reflects the monumental bravery of U. S. President Barack Obama in challenging a Cuban policy dictated for over a half-century by the remnants of the Batista-Mafia dictatorship in Cuba that fled the victorious Cuban Revolution and quickly resettled on U. S. soil, primarily Miami, in the first week of January, 1959. So, indeed, study that historic sign heralding yesterday's departure of Flight 387 from Fort Lauderdale, Miami's sister city, to Santa Clara -- the Cuban city most associated with Che Guevara because that's where he led the last decisive battle of the Cuban Revolution, the Revolutionary battle that convinced the Batista & Mafia leaders in Havana to dash for their getaway planes and ships. Unfortunately, most of those planes and ships ended up in the perpetually friendly confines of Florida. 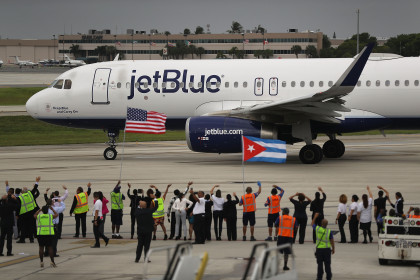 This photo shows airline workers in Fort Lauderdale yesterday joyously waving American and Cuban flags as they watch Flight 387 taxi down the runway prior to its very historic flight to Santa Clara, Cuba. 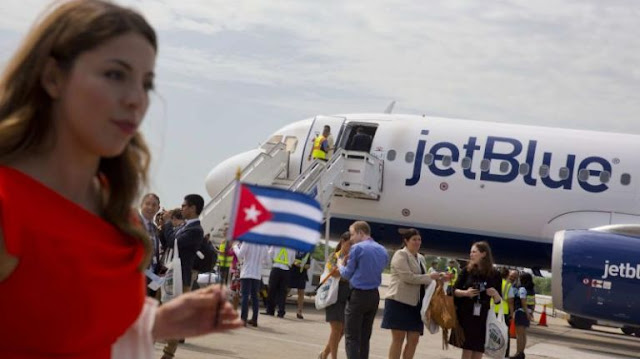 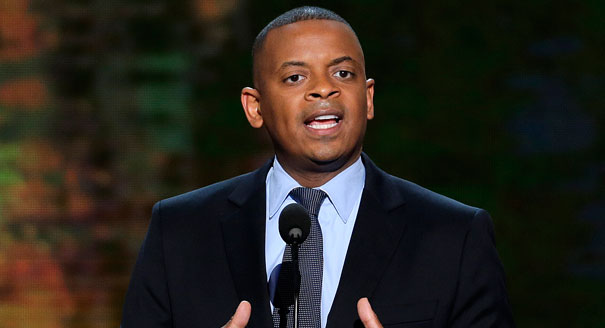 America's excited Secretary of Transportation, Anthony Foxx, was aboard Flight 387. On behalf of the U. S., he made this official statement: "Today's actions are the result of months of work by airlines, cities, the U. S. government, and many others toward delivering on President Obama's promise to reengage with Cuba." Mr. Foxx confirmed that following the historic Flight 387, other major U. S. airlines -- American, Alaska, Delta, Frontier, Southwest, Spirit, United, etc. -- will soon begin making regular flights to ten Cuban cities from U. S. cities such as New York, Los Angeles, Atlanta, Charlotte, Fort Lauderdale, Miami, Orlando, Tampa, Houston, etc. Asked about the fact that "the U. S. Congress and Miami politicians are not about to let go of the U. S. embargo against Cuba," Mr Foxx said, "President Obama's ongoing re-engagement with Cuba has opened up 12 legal and authorized categories for Americans, and not just Cuban-Americans, to travel to Cuba." 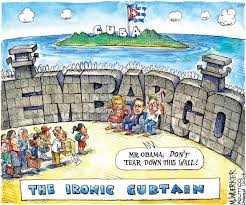 As this pertinent Editorial Cartoon points out, a mere handful of anti-Castro hardliners have fiercely braced & dictated the embargo against Cuba for over half-a-century -- hurting America far more than it has ever hurt the now 90-year-old Fidel Castro. And the title -- "The Ironic Curtain" -- for this appropriate statement graphically illustrates that, IRONICALLY in the world's most famed democracy, America's Cuban policy for over half-a-century has done more harm to the worldwide image of America and democracy than any other continuous topic in history. Americans who deny that basic fact will have trouble disputing it. 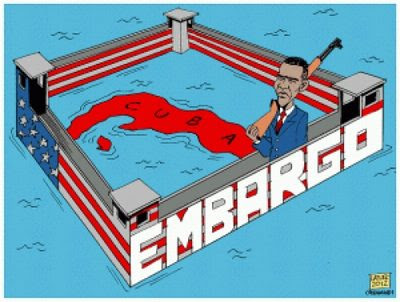 Almost 8 years ago when he began his transformative two-term presidency replacing the Bush dynasty, Mr. Obama was shamefully forced, in the early going, to march to the congressionally mandated dictates of an American Cuban policy that he well knew hurt and grossly shamed the world's greatest democracy. 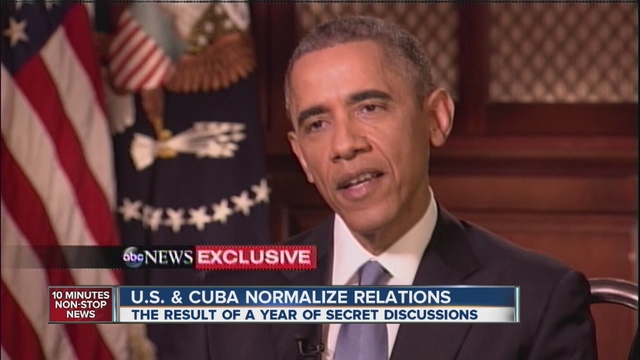 But President Obama threw off those Batistiano shackles and in doing so has displayed far more courage, astuteness, dexterity, and patriotism than any American president since 1952 when the American people sat back and allowed some right-wingers to align the U. S. with the Mafia to support the vile Batista dictatorship in Cuba. That undemocratic debacle was exacerbated in 1959 when the overthrown Batista regime was immediately allowed to resettle on nearby U. S. soil and, incredibly, hide behind the skirts of the world superpower in its decades-old efforts to regain control of Cuba. Those sheer facts, as politically incorrect as they are, illuminate Mr. Obama's momentous initiatives on behalf of Cubans, Americans, Cuban-Americans and democracy. One of those ongoing initiatives was Flight 387 yesterday being added to the tempestuous history of U.S.-Cuban relations, a nexus that for far too long -- dating back to 1952 -- has catered to the greed and whims of an unsavory few to the detriment of the vastly more decent majority. 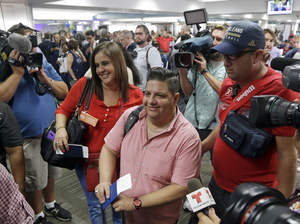 These are happy passengers in Fort Lauderdale yesterday getting ready to board Flight 387 for the ground-breaking trip to Santa Clara, Cuba. Because of draconian Batistiano-style U. S. laws, everyone of these Americans was forced to sign an affidavit swearing their travel falls within the permitted categories that allow Americans to visit Cuba -- such as educational or research trips, etc. Tourism is not permitted {uh, supposedly or, uh, legally}. Such discriminatory, anti-democratic laws have for decades made everyday Americans the only people in the world without the freedom to fly to Cuba while, at the same time, discriminating grossly in favor of Cuban-Americans via travel, immigration, economic and political matters. Despite President Obama bravely slicing into key aspects of the still "legal" Congress-mandated embargo, such affronts as the affidavit swear-ins were meticulously adhered to yesterday in Fort Lauderdale. 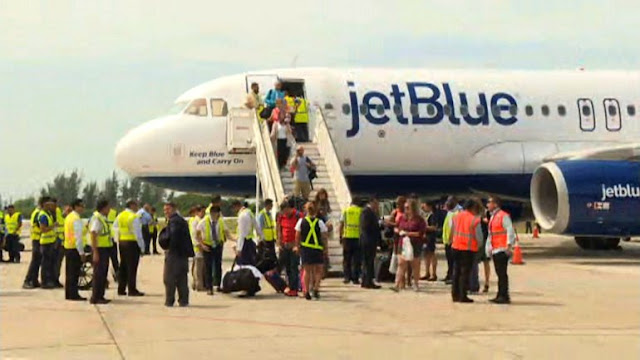 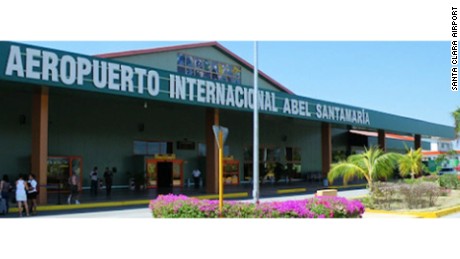 The airport in Santa Clara, Cuba. 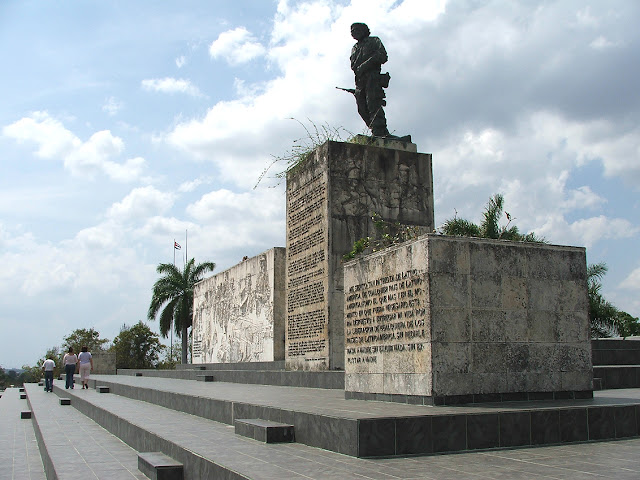 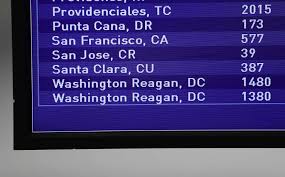