"Let Us Live In Peace" 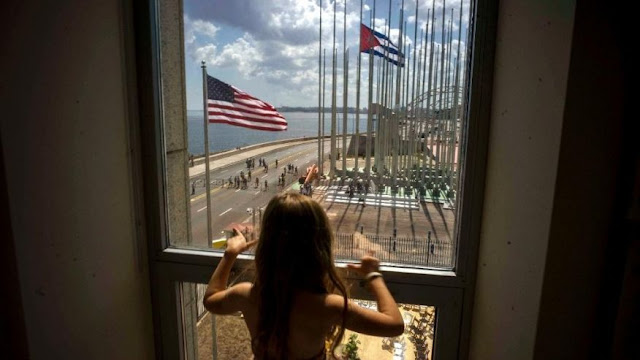 Ponder for a moment this now historic AP/Ramon Espinosa photo. It was taken on August 14th, 2015 and it shows a young American girl looking out the window of the newly opened U. S. Embassy in Havana as the U. S. flag was raised to reopen the embassy for the first time since 1961. It officially heralded the restoration of America's diplomatic relations with Cuba, a herculean and brave accomplishment for President Barack Obama. And now I ask you to ponder this plaintive, pitiful plea: "All we want is to be left in peace." That searing comment...that plea...was made to the Associated Press this week in Havana by an everyday Cuban woman, not by a Syrian woman in war-ravaged Aleppo or an American woman living in crime-infested Chicago. That Cuban woman has a name: Heidi Picot. And she, like all those women in war-torn, crime-infested regions, has ample reason to make her plea from Havana, a plea begging the Batistiano-directed U. S. Cuban policy to finally let her live in peace, a peace that neither she nor her mother has been allowed to have since the 1950s.  Yes, her name is Heidi Picot. Her plea was to the United States. 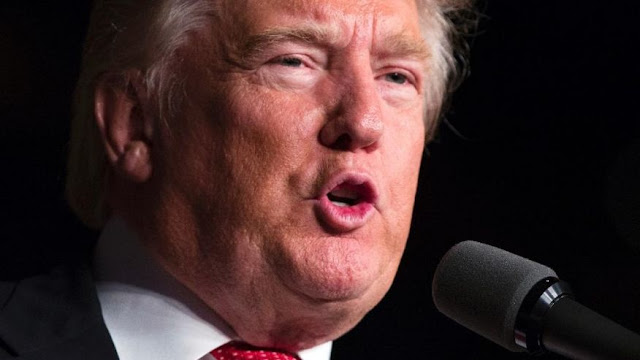 The photo of the little American girl watching the flag-raising and this image of Donald Trump were used to illustrate a major Associated Press article Wednesday, the one that quoted Heidi Picot. This Trump photo was taken by Evan Vucci of the AP and it shows the Republican presidential contender the moment in South Florida he made that gutless promise to anti-Castro zealots that he would change President Obama's peaceful overtures to Cuba...and Heidi Picot. Prior to that not-surprising capitulation in front of anti-Castro extremists, Trump had said he was "fine" with Obama trying to normalize relations with Cuba. Trump had said, "Fifty years of a failed policy is enough." Indeed, 50 years of punishing innocent Cubans like Heidi Picot in Cuba are far MORE than enough, for Heidi and for the U. S. democracy. Yet if the U. S. democracy, at its highest level, can only produce leaders such as the gutless turncoat Trump or bought-and-paid-for Trump opponents, than U. S. democracy and Heidi Picot in Cuba are both in deep trouble. 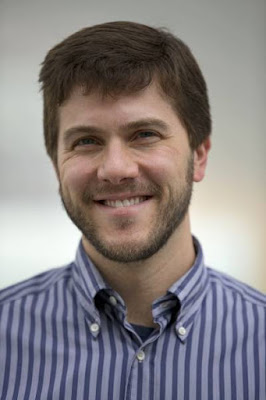 Michael Weissenstein is the chief AP reporter in Cuba. 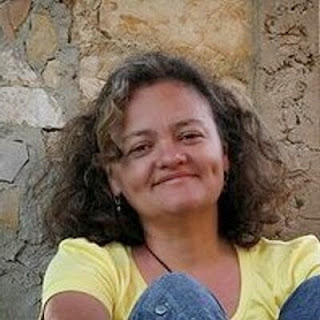 Andrea Rodriguez is an excellent AP reporter in Cuba.

This week -- Wednesday, Sept. 21-2016 -- Weissenstein and Rodriguez teamed to write a major AP article entitled: "Trump's New Cuba Position Provokes Anxiety on the Island." Back on Saturday in my Cubaninsider essay I assailed Trump as a coward for his "new Cuba position designed to appease a handful of powerful anti-Castro zealots in Miami. It represents Trump following in the wake of what other U. S. politicians have been doing for five decades. Meanwhile, such cruelty and cowardice hasn't hurt the now 90-year-old Fidel Castro...who, in fact, looked healthy as he hosted the President of Iran in his Havana home this week. But in the gutless guise of hurting, assassinating, or overthrowing Fidel Castro, America's Cuban policy -- dictated since 1959 by remnants of the ousted Batista dictatorship -- has ruled supreme in its nefarious and asinine assaults on millions of innocent Cubans and on the U. S. democracy. In the meantime, the utter stupidity and ineffectiveness of the U. S. policy relating to Cuba has given Fidel Castro a 191-to-2 favorable vote in the United Nations each October and will make sure that his legacy as revolutionary icon will live far beyond his mortal passing. So, read the aforementioned AP article and take note of the plea by a decent, everyday Cuban named Heidi Picot: "All we want is to be left in peace." She remembers when the U. S. and the Mafia backed the malicious Batista dictatorship, the transfer of the fleeing Batistianos to U. S. soil, the assassination attempts against Castro, the military attack at the Bay of Pigs, the strafing of coastal fishing cabins by speedboats and airplanes, the fatal terrorist bombing of a Havana hotel, the fatal terrorist bombing of a child-laden Cuban civilian airplane, and every single day of her life Heidi Picot has been harmed by the longest and cruelest embargo ever imposed by a strong country against a weak one. And Wednesday Heidi Picot told the AP in Havana: "All we want is to be left in peace." The fact that not enough Americans care about Heidi Picot or about the American democracy probably means that Heidi and the generation that follows her generation will not be "left in peace." 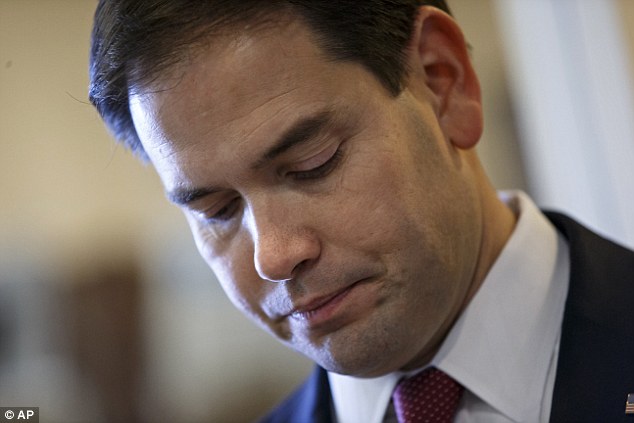 The U. S. Senator from Miami, Marco Rubio, created sycophantic headlines this week by calling Obama administration officials "liars" for implementing aspects...namely the historic commercial flights to Cuba...of the President's bold and decent Cuban policy that is trying real hard to help Cubans like Heidi Picot while also trying to repair the damage the Batistiano tar-baby problems continue to do to America's and democracy's image. According to Rubio and his normally unchallenged ilk, anyone who doesn't meekly capitulate to a few self-serving hardliners' self-imposed right to dictate America's Cuban policy is "a liar" or...worse. "Liar?" Did he say that? Rubio of all people calling other people "Liars?" Yes, he did. HE DID!! 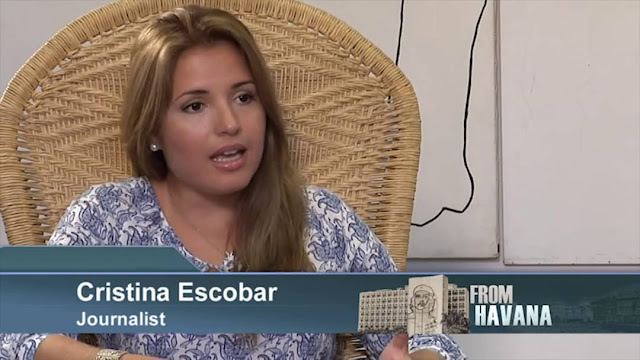 A decent Cuban on the island, Cristina Escobar, has spent her entire adult life identifying with everyday Cubans like Heidi Picot. At the age of 28, Cristina is the best news anchor in Cuba and the region. Well educated, furiously Cuban, and fluent in Spanish and English, Cristina has studied broadcast journalism and U. S. culture in California and she brilliantly covered the last Vidal-Jacobson diplomatic session in Washington. On YouTube and other online venues you can study and critique her journalistic expertise and hear such statements, in either English or Spanish, as: "Cuba's fate is up to Cubans on the island, not Cubans in Miami and Washington;" "Yes, we are underdogs; that's part of being Cubans on an island so close to defectors hiding behind the imperial power of a superpower;" "Before and after the victory of the 1959 Revolution, Cubans put their lives on the line for sovereignty; as tenuous as it may be considering our enemies, it is still worth fighting for and dying for;" "We Cubans on the island want peace first, prosperity later; that means we want normal relations and normal trade with the U. S.;" "I know so many decent Americans who don't want to hurt us; I only wish they had a say regarding how the U. S. government treats us;" etc., etc. 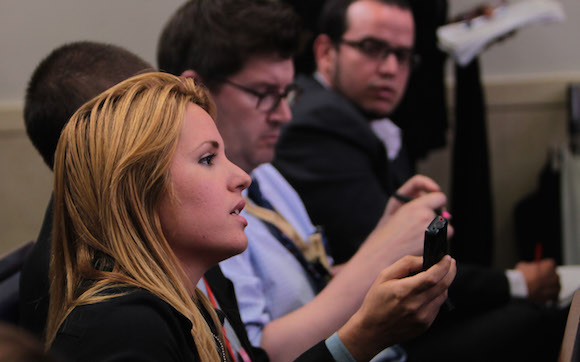 This image of Cristina Escobar came during the historic moment she was asking Press Secretary Josh Earnest a question at a White House news conference, the first Cuban journalist ever afforded that honor. She didn't disappoint. She asked six pertinent questions, one of which produced headline-grabbing confirmation from Josh Earnest that President Obama was planning to visit Cuba. But perhaps her most pertinent question was when she asked Earnest if the United States, despite the peaceful overtures from Mr. Obama, would continue "its regime-change programs?" That was the toughest one for Josh Earnest, but he tried. The answer, of course, is...yes, the regime-change programs have continued unabated and will likely continue forever because a handful of hardliners in Congress and a handful of important benefactors in Miami, generation-to-generation -- can easily dictate both their lavish funding and their startling legality. A 14-minute YouTube video, by the way, captures Cristina Escobar's key questioning of Josh Earnest. 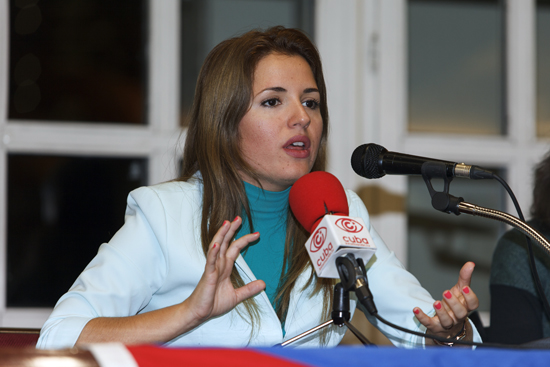 Informed sources in Miami and Havana are well aware that Cristina Escobar has lush offers...reportedly $3 million in cash plus a paid-for mansion from just one source...when and if she defects from Cuba; such a high-profile defection, even without denouncing Fidel, would presumably be worth such enticement to some well-heeled hardliners. Also, either in English or Spanish, she could instantly be a first-tier, highly paid broadcaster on U. S. soil. The problem with that scenario is...neither defecting nor selling-her-soul seems to be a part of Cristina's DNA. She's a Cuban-Cuban, not a defecting Cuban. And...she wants Cubans like Heidi Picot to be "left in peace." In other words, Cristina Escobar disagrees with Marco Rubio.
&*************************&