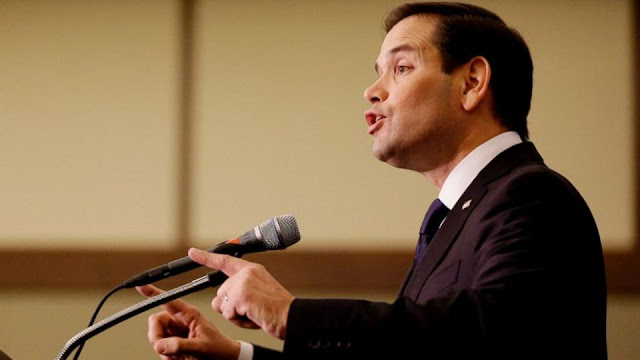 The image above shows Senator Marco Rubio ranting and raving on the Senate floor this week -- on Sept. 15, 2016 -- in a puerile, revengeful and stupidly misguided tirade against President Obama and, of course, Cuba. This photo was used in a report by J. J. Gallagher that was aired on ABC's Good Morning America and its sister tie-in Yahoo News. Mr. Gallagher began his report with these words: "Sen. Marco Rubio of Florida excoriated the TSA and the Obama administration on the Senate floor yesterday." BEAUTIFUL! Rubio's excoriation was because he blames the Transportation Security Administration and President Obama for the fact that, for the first time since 1961, commercial airplane flights from the U. S. to Cuba resumed on August 31st, 2016. The commercial flight by jetBlue represented one more slice that the brave and decent President Obama has taken out of a devastating {for innocent Cubans and innocent Americans} U. S. Cuban policy dictated by remnants of the Batista-Mafia dictatorship that was overthrown on Jan. 1-1959 with much of that leadership quickly and, it seems, permanently regrouping on U. S. soil, mainly Rubio's Miami environs. For over half-a-century -- during unending but unsuccessful efforts to regain control of Cuba -- Rubio and his ilk are not accustomed to being challenged by the American people, the media or surely not a President with the skill, decency and bravery of Mr. Obama. 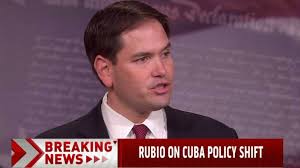 Marco Rubio is finishing his first 6-year term in the U. S. Senate. Being an anti-Castro Cuban-American zealot from Miami -- along with the obligatory connections with the Bush dynasty and the Tea Party -- constituted his prime credentials. He hit the Senate floor running for President and had the worst voting record among all the Senators because of his torrid presidential ambitions and fund-raising. Asked about his uniquely infrequent votes, he slammed Congress for not getting anything done. Rubio's one signature bill, related to immigration, was a laughable joke. His other headlines, apart from his presidential aspirations, concerned his rants and raves about shutting down the government and, the day he became President, to begin turning back all of President Obama's positive overtures to Cuba. The fact that polls show that most Cuban-Americans, even in Miami, favor Obama's Cuban policy over his was/is, of course, inconsequential. Since when do everyday Americans or everyday Cuban-Americans have a voice in politics? In the Republican presidential primary Rubio was flush with money and backed by a fawning media but got wiped out by Chris Christie in the debates and by Donald Trump in his own home-state primary in Florida, after which Rubio quit the presidential race. He announced to the world that he would then not seek reelection to the Senate. That soon turned into another Rubio distortion because, apparently, he belatedly realized he needed the Senate exposure to seek the 2020 Republican presidential nomination. 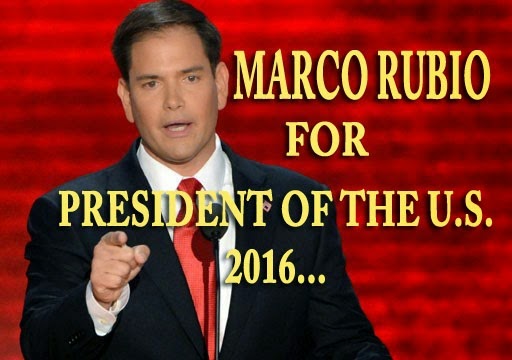 While Rubio's lavishly funded and media-propelled presidential bid unceremoniously petered out in 2016, there is no doubt he will have plenty of money and ample fawning media exposure to make another White House bid in 2020 and certainly more-than-enough money to retain his Florida Senate seat. 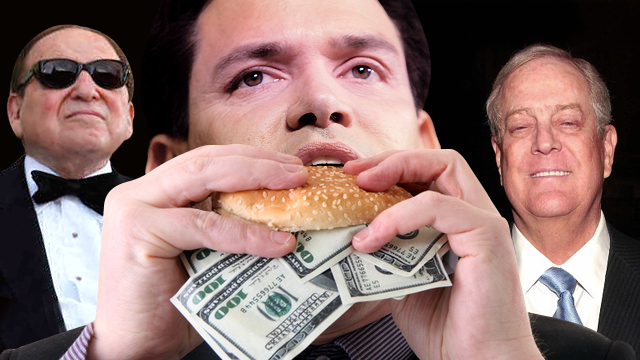 Rubio's taste for money-burgers is legendary among America's most famed conservative and right-wing multi-multi-multi billionaires who, to the chagrin of most democracy-loving Americans, appear to have an easy path to purchasing the basic fabrics of the U. S. government, especially since an incredible 2010 Supreme Court ruling that permits unlimited political donations. Uniquely in America, presidential and even key Senatorial races become billion-dollar money-grabs, with the whims of a few billionaires seeming to circumvent and take precedence over the collective votes of millions of not-so-rich individuals. The multi-multi-multi billionaire on the right in the above montage, Mr. Koch, has made sure that one of his political PAC machines has sent tens of millions of dollars to Florida to back Rubio's reelection to the Senate. So really, who do you think is going to win that money-crazed Senate race in Florida? 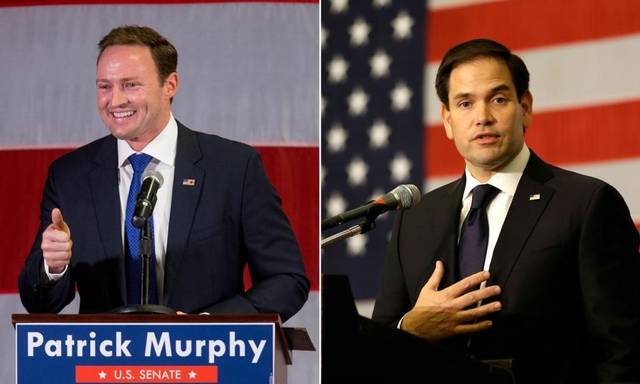 Patrick Murphy is the Democrat running a losing campaign against incumbent Republican Marco Rubio in the current race to represent Florida in the U. S. Senate. Murphy was a Republican himself till he felt it was taken over by the Tea Party, then he became a Democrat. Murphy's family is very, very, very rich but he's a pauper compared to Rubio's prime financial supporters. 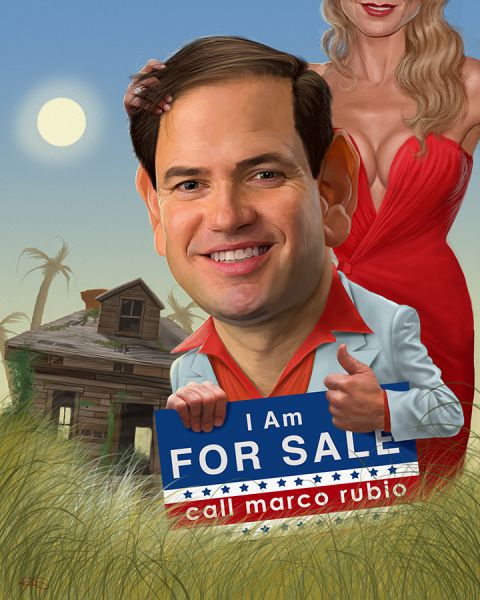 A major article available online and written by notable investigative journalist Ken Silverstein is entitled: "I Am For Sale******Call Marco Rubio." In the long essay Silverstein uses well-known names, places, and little-known Rubio associations that are chilling and, it would seem, devastating to a political career.  But we have entered into a period in American history in which most Americans agree that money talks...and votes! If that were not so, America's two-party political system would not presently have a presidential race in which both candidates have extremely high unfavorable ratings and a Senate race in Florida wouldn't have millions of dollars flooding in from out-of-state billionaires. So...let's see?..."who do we vote for, Martha? The lesser of two evils...or not at all...or...why don't we just go on a long cruise. Martha, uh, you always wanted to take a cruise..." 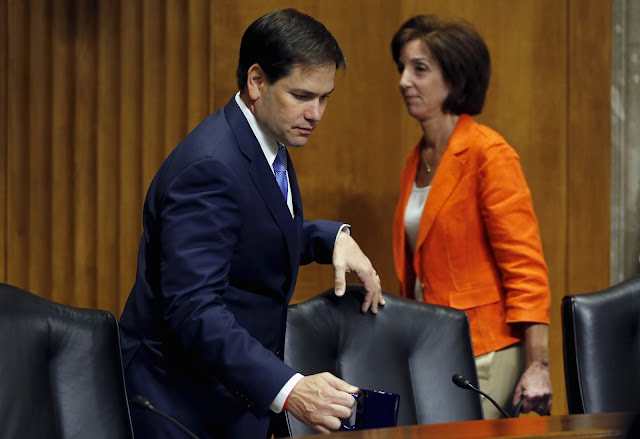 This photo is a personification of Marco Rubio's first six years in the Senate and, most likely, is a harbinger of his next six-year term...uh, 4 years because of the 2020 presidential race, which also probably means he'll set another record for not even being on hand in the Senate to vote but often on hand to "excoriate" anyone who tries to challenge his dire plans for Cuba. The lady in the orange jacket casting an evil eye and sarcastic grin at Rubio as she judiciously walks by is Roberta Jacobson. She is an absolutely brilliant U. S. diplomat. She represented President Obama and the U. S. in all four of the diplomatic sessions with her Cuban counterpart Josefina Vidal. When she skillfully finished that task, Mr. Obama nominated her to the vital post as U. S. Ambassador to Mexico, a vacant and badly needed position that everyone it seems felt she was the most qualified to fill. Everyone except Rubio and a few other anti-Castro zealots who sought revenge against Ms. Jacobson and the U. S. for her diplomatic achievements related to Cuba. Week-after-week-after-week Rubio used his Senatorial power and his petty whims to block Ms. Jacobson's badly needed Ambassadorship to Mexico. If Rubio has a single political achievement {other than being a mega-fundraiser} to balance out his self-serving pettiness, I'm trying to find out what that achievement might be.
And by the way: 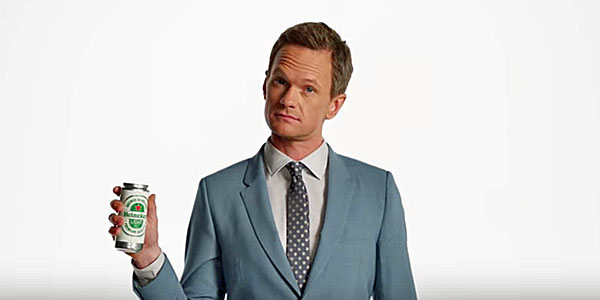 Just in the last few days I have read four major articles, including two in USA Today, about the U. S. television networks massively fighting the surge of Ad Blockers. Then the Associated Press had a major article entitled: "Facebook Blocks Users From Blocking Ads." Those four articles resonated with me because of another article about a caring mother in Minnesota who didn't use an Ad Blocker on her television but, because she had two sub-teen daughters, she always made sure she kept the remote handy so she could instantly hit the mute button or change channels when the commercials came on. But one night when the two girls were in the living room watching television...they weren't allowed to have televisions in their rooms...the mother had misplaced the remote. Thus the commercial depicted above popped on the screen...the commercial she had come to fear the most. The mother scrambled frantically to find the remote...in the couch, on the floor...but to no avail. The entire 30-second commercial screamed across the room. It salaciously highlighted celebrity-comedian Neil Patrick Harris repetitiously shouting the phase "flipping another man's meat" in the ad for Heineken beer. The frantic mother heard the audio as, on her hands and knees, she finally found the remote...but too late. As she cut off the television entirely, she stared in horror at her 11-year-old daughter whose facial expression and gestures revealed she was stunned by the ad, which the mother correctly labeled "pornographic filth." She chastised herself for not being able, that one time, to protect her pre-teen daughter...in her own home...from that assault from pornographic filth being the prime feature of a primetime ad that eluded the mother's defenses. 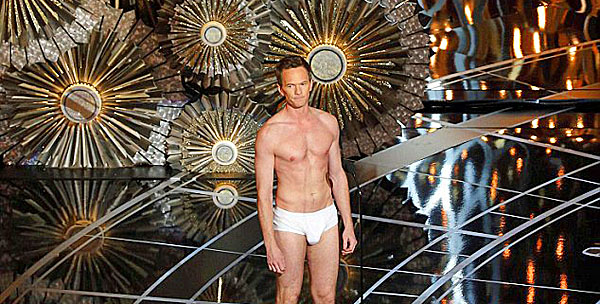 The gripping article about the Minnesota mother who tried so hard to protect her daughters from the Heineken beer ad, also referenced the same celebrity-comedian salesman being almost naked while hosting the prime-time 2015 Academy Awards. I believe that Minnesota mother, and millions of others, would also call this "pornographic filth." MY POINT IS THIS...and I am not a prude: If the television networks and online billionaire profiteers want to scream about doing away with Ad Blockers, I believe they should first do away with the pornographic filth they insist on saturating American homes with, such as that mother's living room in Minnesota. Billions of dollars, political power and monopolistic privileges do not make unwanted assaults from pornographic filth right. That mother in Minnesota, and millions like her, are right. They need and deserve Ad Blockers in case their remotes are not always at their fingertips. 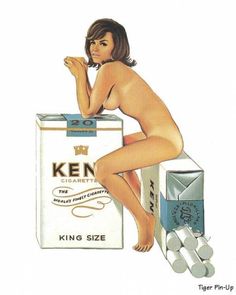 In past decades in America, pornographic ads like this one sold a passel of Kent Cigarettes and other harmful products, not so unlike the Neil Patrick Harris ad sells Heineken beer now. 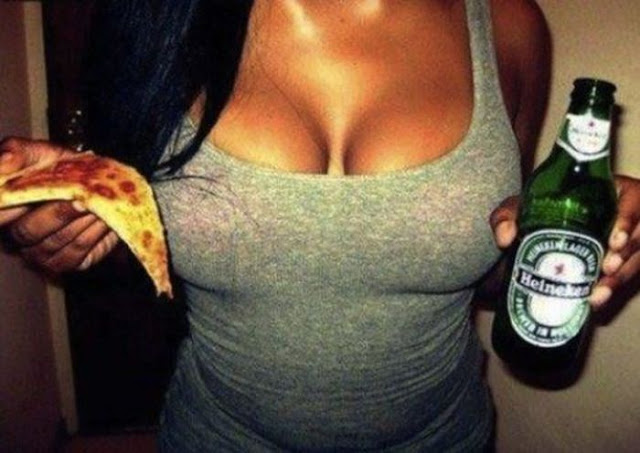 This ad seems to be selling pizza, pornography and Heineken beer. The pornographic cigarette ads ended, I assume, because of the proven health risks from smoking cigarettes, not from the fact that the tobacco companies ran out of money or the ad agencies or celebrity endorsers suddenly developed a flair for decency or respect for others. There are, for sure, a plethora of readily available pornographic avenues but that unfortunate fact-of-life should not include direct paths right into the unsuspecting or helpless living rooms of decent, innocent people like that mother in Minnesota who deserves the right to protect her pre-teen daughters as she sees fit and also to partake of primetime entertainment if she so chooses. In other words, that mother in Minnesota deserves an Ad Blocker to assist her remote control even if the billionaires who own the networks, the online behemoths, and the politicians want to assault her.