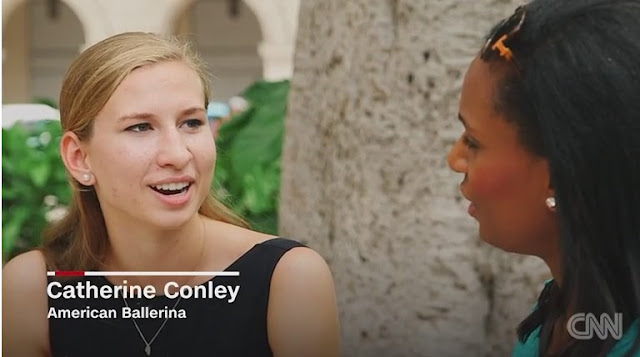 This weekend CNN has an excellent report on 18-year-old American Catherine Conley spending a year in Cuba to train at the island's famed School of Ballet. She arrived the day after the U. S. last month resumed commercial airplane traffic to Cuba for the first time since 1961. If you missed the report on CNN you can dial it up on the network's website. It has splendid video of Ms. Conley practicing her ballet moves on a crowded street in Havana. She says, "I feel incredibly honored to be the first American ballerina to come here and symbolize the two countries coming together. I love the culture here and the Cuban School of Ballet is one of the best in the world." The report points out that the revolutionary Cuban government since 1959 has steadfastly funded its national ballet program that has produced many of the world's most famed ballet stars as well as many of the world's leading heads of ballet programs, such as the Washington School of Ballet whose Cuban leader is featured in the CNN report. Ms. Conley said she knew "very little" about Cuba, other than its fame for turning out ballet stars, before her arrival on the island that she now "loves."