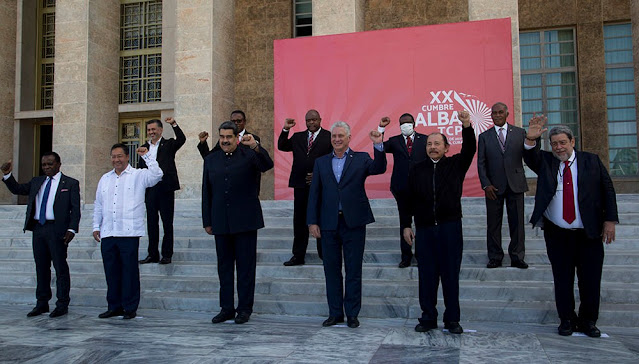 The two interesting, and perhaps newsworthy, photos above were taken today in Havana by Ismael Francisco for the Associated Press. The top photo shows the two leaders of Venezuela and Cuba laughing happily and spontaneously. The bottom photo shows the current 11 leaders of the Bolivarian Alliance nations in Havana today at the ALBA Summit. The two leaders of Venezuela and Cuba are actually happy because the U. S. effort that was supposed to have dethroned them by now has failed...and because they, along with some of their friends, are celebrating the fact that it appears that neither the U. S. Blockade nor COVID-19 with overthrow Revolutionary Cuba in the, uh, foreseeable future. 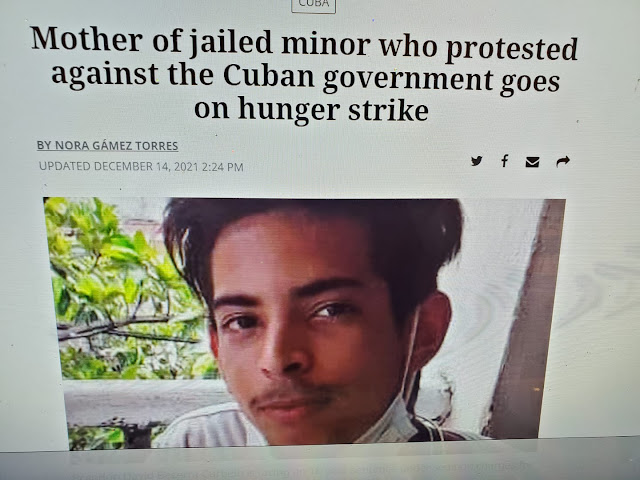 Of course, today -- on Dec. 14-2021 -- while leaders in Cuba seem happy as reported above by the AP, the usual extreme Counter Revolutionary extremist "journalists" in the mainstream media -- such as Nora Gamez Torres of the Little Havana/Miami Herald, as shown above -- only report on why it is vital for Cuba to be overthrown before Christmas-1921. So, if you want to read all about that Prediction, read the latest vitriol today, or any day, from Little Havana by Nora Gamez Torres. 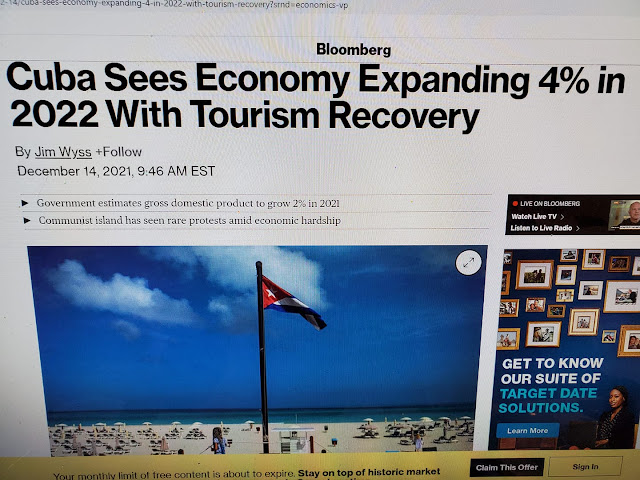 But today -- Dec. 14-2021 -- real journalists such as Jim Wyss of Bloomberg News writes a newsworthy article about Cuba...as shown above. 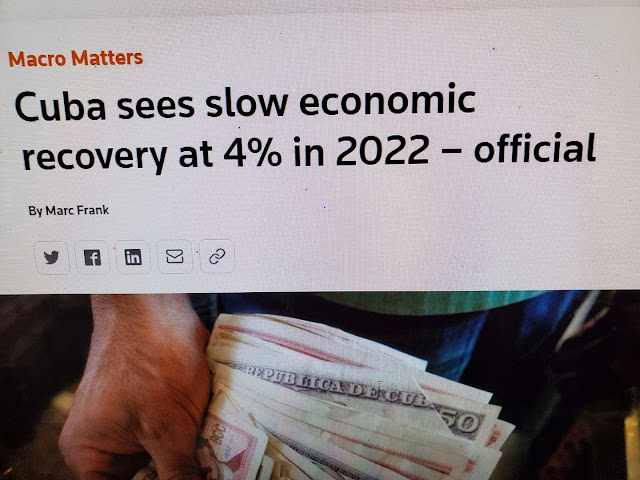 And today -- Dec. 14-2021 -- the real and great journalist Marc Frank for the London-based Reuters News source also writes a newsworthy article about Cuba. Both Jim Wyss and Marc Frank will tell you about things that are negative about Cuba but, unlike the U. S. media, they also will let you know about positive revelations about Cuba. The two articles today by real journalists report on the fact that Cuba appears to be recovering from the twin devastations of the ever-tightening/6-decade-old U. S. Blockade and the now curtailed two-year-old COVID-19 pandemic that is no longer ravishing the Caribbean's largest island nation. 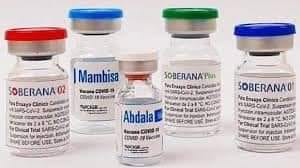 Cubans on the island are happy that home-grown vaccines have drastically reduced the devastations of the COVID-19 pandemic. 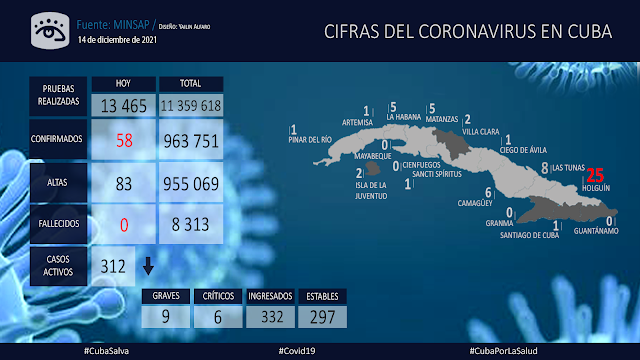 Just a few weeks ago Cuba was reporting to its people that there were many thousands of new positive COVID-19 cases and each day Cuba's TV programs listed the names of a 100-or-so people each day that had died from the pandemic. But now the drastic vaccine programs across the island have produced new statistics like those today -- December 14-2021. In the past 24 hours, as is the typical case now, there were 0 deaths/fallecidos and just 58 new positive cases. As the map above shows, 25 of the 58 new cases today were in the southeastern city of Holguin, and a special medical squad has gone there to help out. 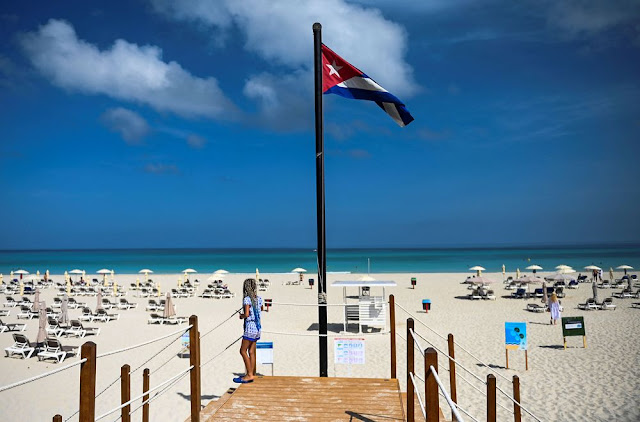 This photo today was taken by the great Yamil Lage for the superb Paris-based AFP News Agency. It shows Cuba's famed Varadero Beach and it was used to illustrate a newsworthy AFP article today that the island's vital tourist industry is beginning to revive for the first time since the Trump-Biden administrations strongly tightened the Blockade and since the island's efficacious vaccine program has gotten a handle on COVID-19. In other words, while "journalists" like Nora Gamez Torres today predicted the imminent demise of Cuba on behalf of Little Havana, real journalists such as Jim Wyss and Marc Frank actually today reports actual newsworthy happenings in Cuba. 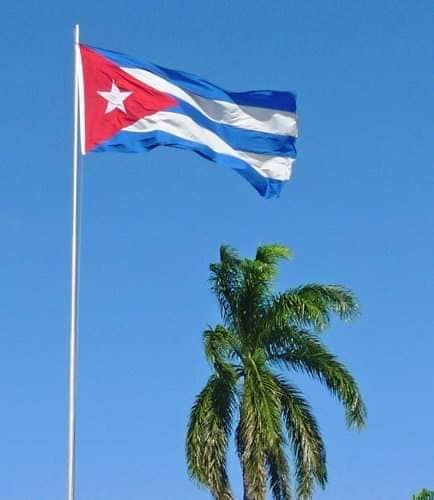 This photo was taken today -- Dec. 14-2021 -- and actually shows the Cuban flag still flying over Revolutionary Cuba. And regardless of what Nora Gamez Torres tells you each day, it might still be flying over the island on Christmas-2021, or even a few days longer!!! 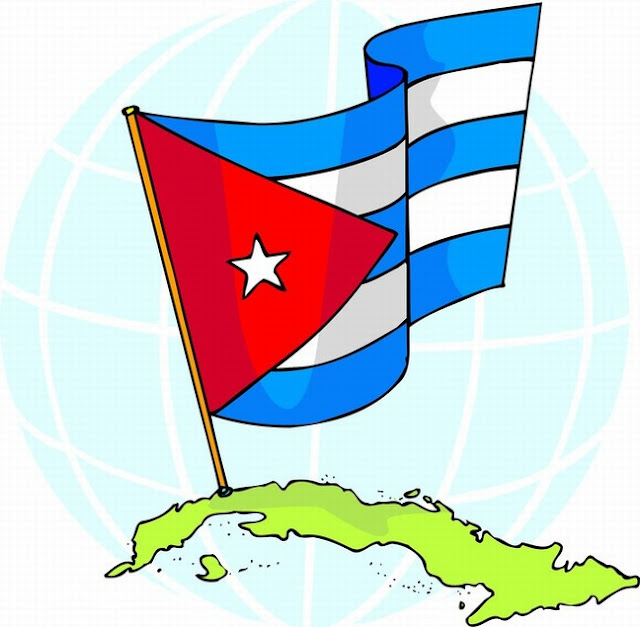