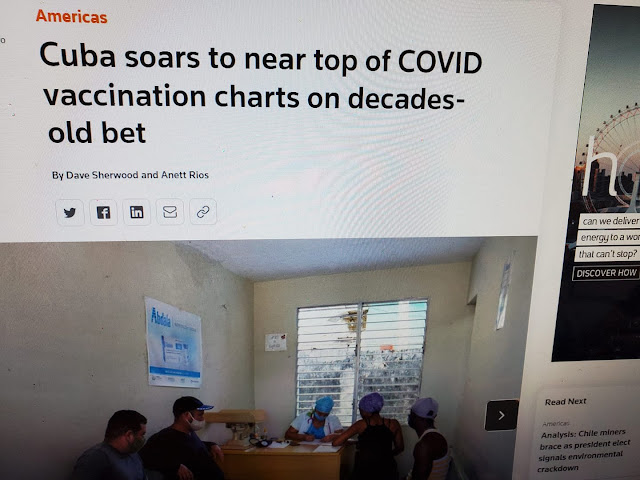 In the United States the Media as well as the  Ultra-Lucrative Anti-Cuba Cabal that formed in 1959 in Miami remains obsessed with damning Revolutionary Cuba while implying, of course, that the Batista-Mafia regime that preceded it was one of the world's greatest and sweetest Democracies. So...in December-2021...Americans are deprived from such Headlines as the one depicted above. It shows the world's top News Agency -- London-based Reuters -- informing the world that Little Cuba, despite the genocidal U. S. Blockade of the island, has managed to take a leading role in the World's Battle to Combat  the COVID-19 Virus. 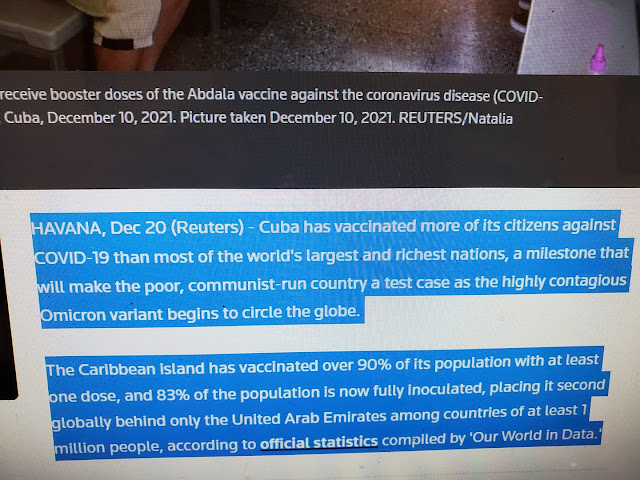 If there happens to big, important, and positive news from Cuba, the U. S. media and the Counter Revolutionary Cubans in Miami and in Congress make sure it is ignored as much as possible by Americans who are programmed to financially and politically support Miami Cubans who are already wealthy and to support the Trump & Biden administrations as they continue to tighten the USA's genocidal Embargo/Blockade against Cuba that began in 1962 for the purpose of starving Cubans in Cuba to induce them to rise up and overthrow their Revolutionary government...supposedly to return the U.S.-backed Batistianos & Mafiosi to the island. Above, the London-based Reuters, as an unbiased News Agency, is able to report to the world this week that Little Blockaded Cuba is remarkably a leader in fighting the deadly Pandemic..."...according to official statistics compiled by 'Our World in Data.'" 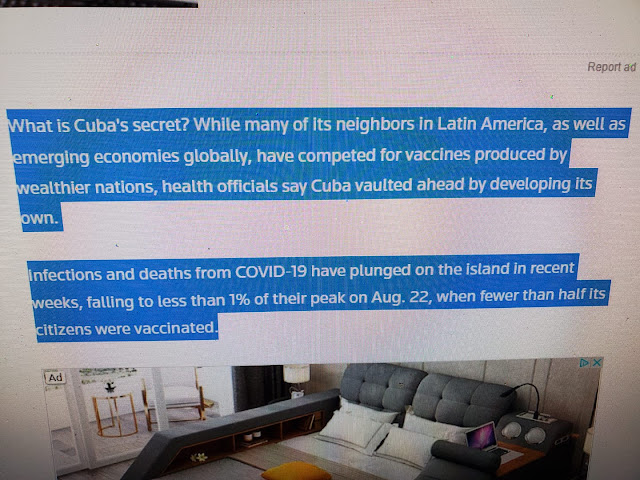 Not dictated to by Cubans in Miami and in Congress, Reuters is able to report to the world what it calls "Cuba's Secret" regarding the island's renowned success in the fight against COVID-19. {See the two sentences above}. 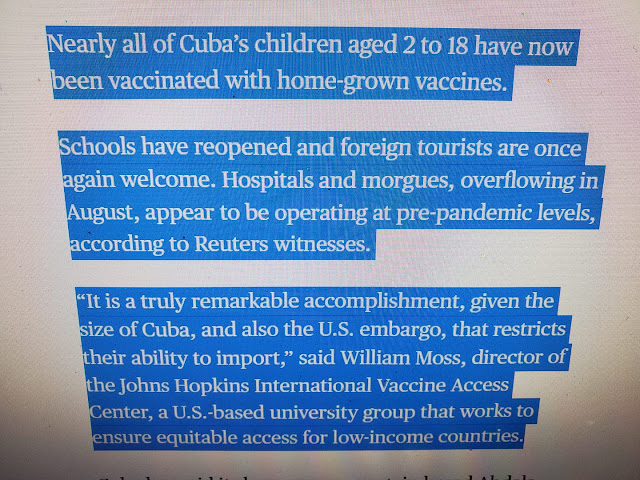 While the U. S. Media seems able to only quote extreme anti-Cuban counter revolutionary benefactors in the USA, please read what Reuters this week reported to the world from London: "It is a truly remarkable accomplishment, given the size of Cuba, and also the U. S. embargo, that restricts their ability to import." That unbiased sentence described what Cuba has accomplished against COVID-19 with its own homegrown vaccines "despite its size and the U. S. Embargo." And the Quotation was told to Reuters by one of America's greatest experts. 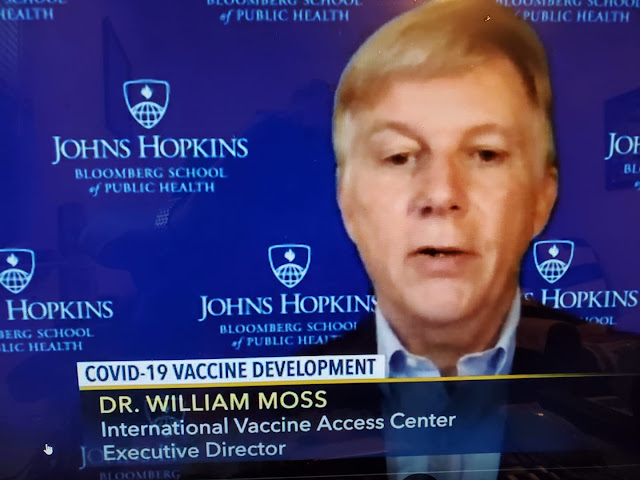 One day, I hope, the U. S. media will be able to quote a great American Professor and Expert -- such as Dr. William Moss of Johns Hopkins University -- even if he says something positive about Cuba. And YES, Dr. Moss loudly praised and lauded little Cuba for its wildly successful homegrown COVID-19 vaccines that the island has developed what Dr. William Moss explained was accomplished "DESPITE the United States EMBARGO." When and if anyone in the mainstream U. S. media would publish such a comment from a notable American about Cuba, the United States Democracy would, I believe, regain some of its legitimacy since it supported the Batista-Mafia regime in Cuba back in the 1950s.