Cuba Soldiers On vs. Blockade 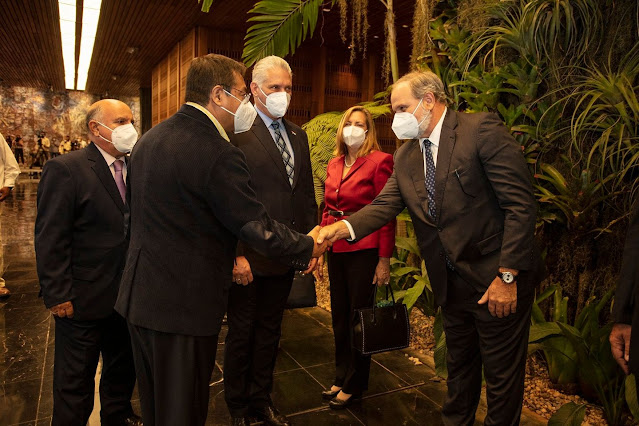 This week in mid-December of 2021 Cuba hosted the 11 nations of the Bolivarian Alliance/ALBA and the session included the three Presidents -- Diaz-Canel of Cuba, Ortega of Nicaragua, and Madura of Venezuela -- that Little Havana/Miami/USA, three formidable foes, have been determined to eliminate during the Trump-Biden administrations. Interestingly enough, but the most celebrated visitor this week in Havana was the President of Bolivia, Luis Arce. The photo above shows Diaz-Canel introducing Arce to one of the celebrity lines. 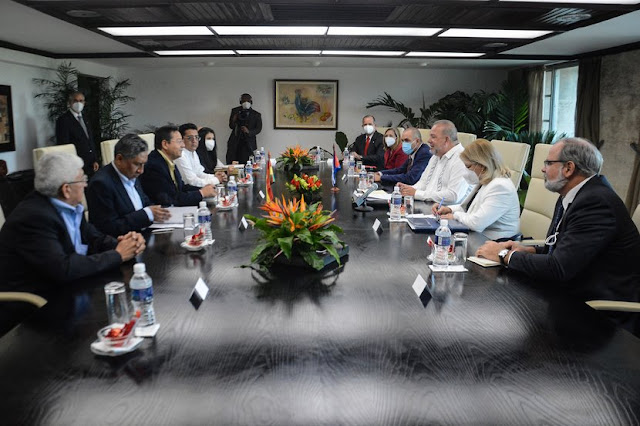 After long meetings with Cuba's undisputed leader, Miguel Diaz-Canel... President Arce held many meetings with other top Cubans. Above that is Arce in the middle on the left facing Cuba's Prime Minister Marrero. 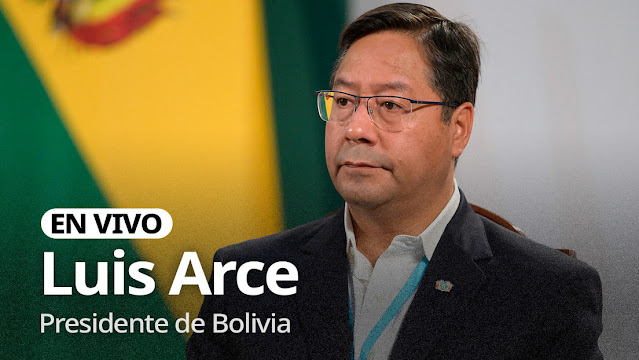 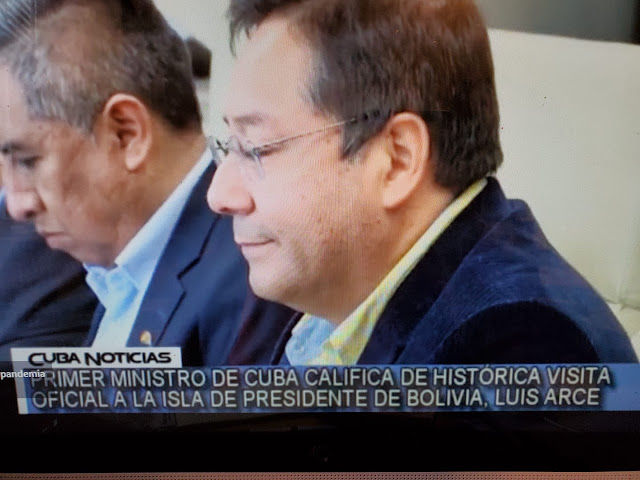 There are reasons that, among all the key visitors to Cuba this week, that Luis Arce, the President of Bolivia, was spotlighted. 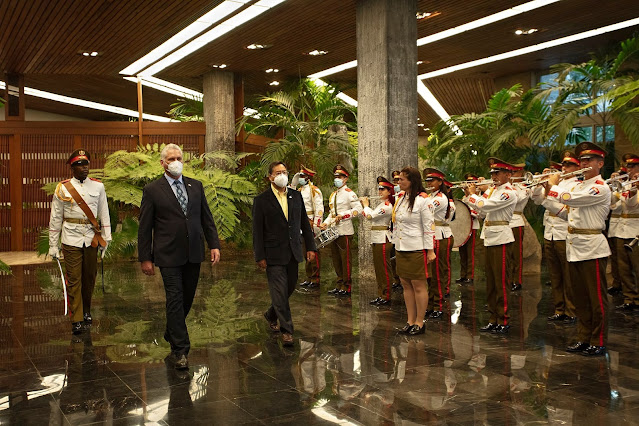 Of Course, it was President Arce that President Diaz-Canel marched most ceremoniously down the elaborately rehearsed military/band line. 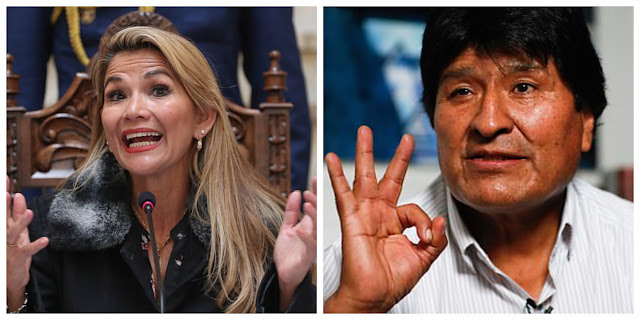 The two photos above explain why Cuba puts so much of an emphasis on the Presidency of Luis Arce in Bolivia. During the Trump presidency the U. S., more severely than ever, tried to eliminate four regional governments in particular, in this order: Cuba, Venezuela, Nicaragua, and Bolivia. Briefly...what many considered a bloody coup replaced Bolivia's President, Evo Morales -- Cuba's longtime dear friend -- with Jeanine Anez, a dear friend of the U. S. and Miami. 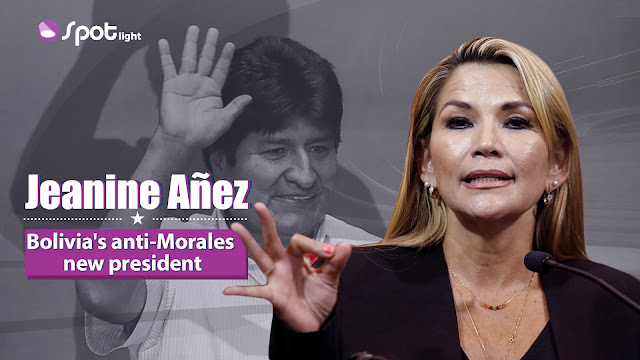 And so...Jeanine Anez became Bolivia's anti-Morales new president from November 12-2019 until November 8-2020. That was when an election in Bolivia replaced her with President Luis Arce. 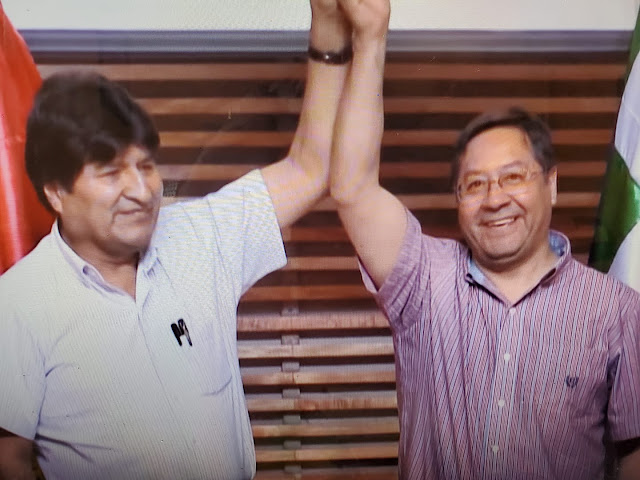 Although the coup had chased Cuba's dear friend Evo Morales out of the country, he did get to raise the hand of Luis Acre as the new President of Bolivia. Luis Acre is Evo Morales's man and Acre had been Evo's longtime Finance Minister. 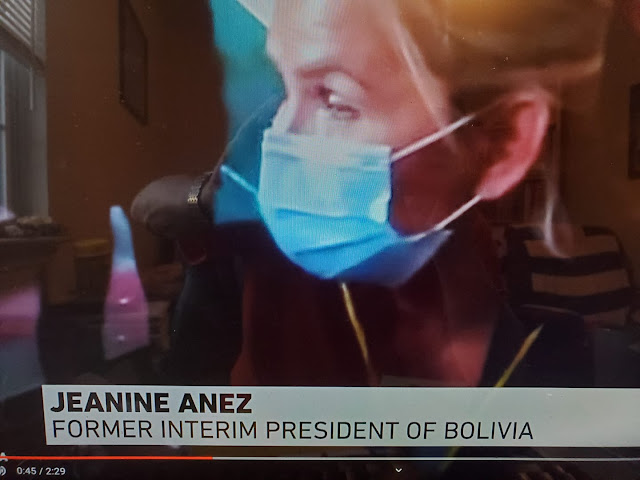 The Morales-Arce forces in Bolivia believe that  54 Morales followers had been killed/murdered during the coup that briefly put Jeanine Anez in power. 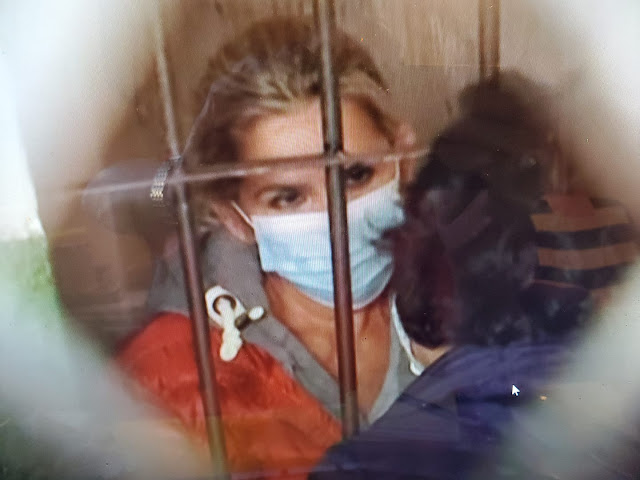 And, as shown above, Jeanine Anez was arrested for her part in the coup and put in prison. 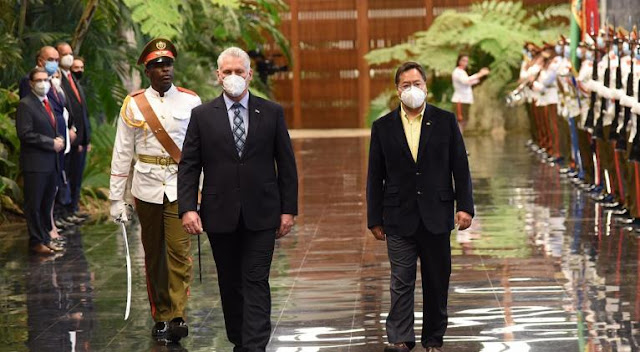 The photo above shows Cuba's President Miguel Diaz-Canel spotlighting Bolivia's President Luis Arce in Havana this week although 10 other important and Cuba-friendly Presidents were also on the island. The significance pertains to several factors, one is the coup that briefly put the U.S.-friendly Jeanine Anez as the leader of Bolivia before the Bolivian people installed the Cuba-friendly Luis Arce as the new President of Bolivia. In Havana this week, President Arce said, "The continuing effort of Miami and Washington to undermine and overthrow the governments of Cuba, Venezuela, Nicaragua, and Bolivia mainly exposes the U. S. belligerence and mainly harms the everyday people of these four proud nations that want to decide their fates."

Indeed, Bolivia is a very important nation in Latin America. The BBC News map above clarifies that fact. Bolivia is bordered by Brazil, Paraguay, Argentina, Chile, and Peru. That location makes Bolivia very special. Bolivia also has almost 12 million people, slightly more than Cuba has. For sure...Cuba, the United States, and Miami would love to have a government they like in Bolivia. After surviving a coup in Bolivia, at least at the moment Cuba has a dear FRIEND back in charge of Bolivia.