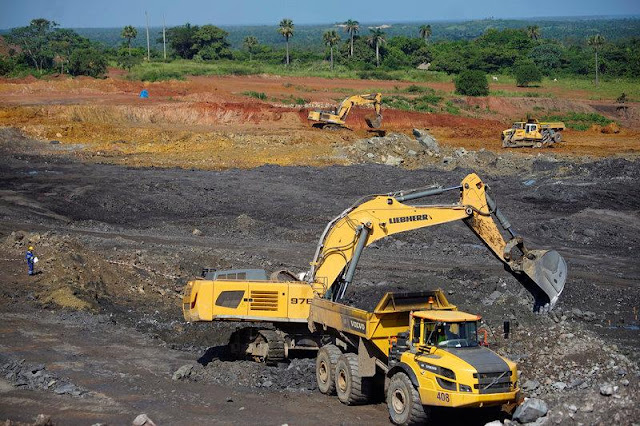 The major project shown above by this Alexandre Meneghini photo and the next two reveals Cuba's plans to engage new foreign partners in an effort to boost its economy as some traditional partners, namely Venezuela, are facing their own cataclysmic economic and political problems. Major state-aligned companies in Cuba and Singapore have signed a 51-49 percent deal to open a $300 million mine in Pinar del Rio province just southwest of Havana. As you can see via this photo, work is already well underway on the mine that is expected to produce 100,000 tons of Zinc and 50,000 tons of lead concentrate annually. 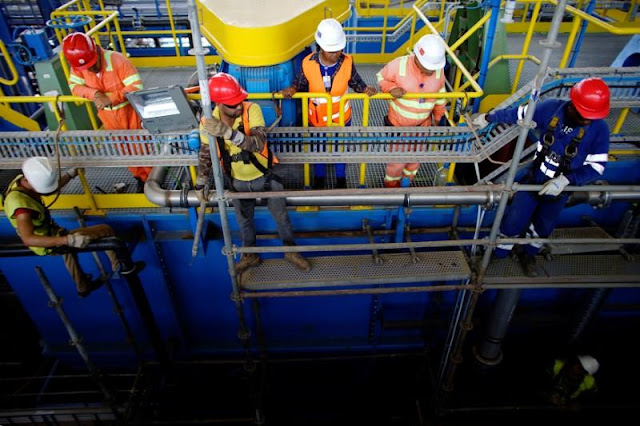 The Pinar del Rio Zinc and Lead mine is already employing many Cubans such as those above and Reuters reports that at full capacity more than 500 Cubans will be hired to work the ultra-modern mine. 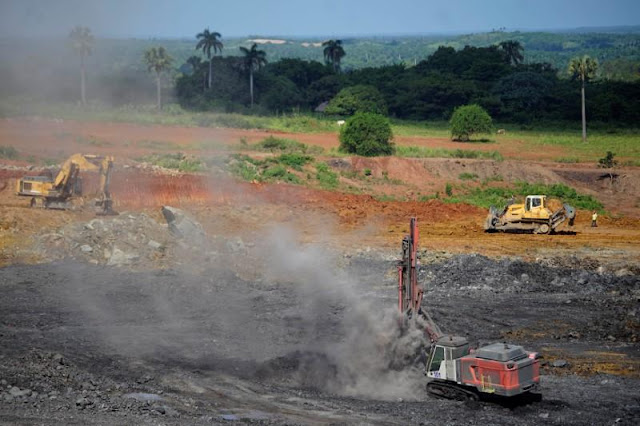 This Zinc and Lead mine that Cuba and Singapore is constructing in Pinar del Rio province was encouraged, at least partially, by a conclusion rendered by the U. S. Geological Survey, which confirmed that Cuba has "untapped potential in minerals other than nickel." For years nickel has been one of Cuba's prime exports but the decline in recent years in global prices for that mineral has hurt the island's economy. Cuba in 2017 is still on pace to produce 54,500 tons of nickel and cobalt but now it is forging ahead, along with Singapore, on two minerals -- Zinc and Lead -- Cuba has never produced before.

This map shows the location of Pinar del Rio province on the very northwestern tip of Cuba just southwest of Havana. The uniquely beautiful Vinales Valley in Pinar del Rio has long been famed for its tobacco production and now the Pinar del Rio minerals might soon be even more profitable than cigars. 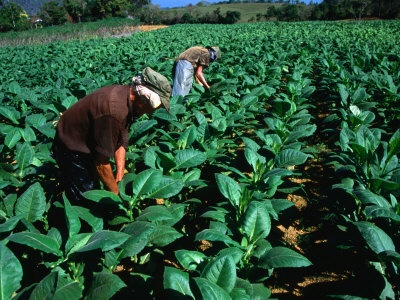 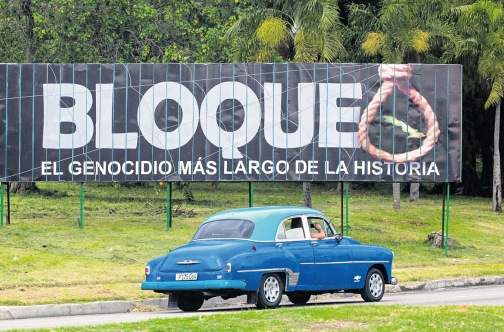 On the short drive from Havana to Pinar del Rio, Cubans, tourists, and foreign business partners such as the Singaporeans will see billboards reminding everyone of the "genocidal" blockade-embargo imposed on Cuba by America from 1962 till today...and beyond. Somehow, the island has survived such long-standing impediments and has remained fiercely and pugnaciously independent since the triumph of the Cuban Revolution over the U.S.-backed Batista-Mafia dictatorship in 1959. The $300 million mine now being constructed in Pinar del Rio with the cooperation of Singapore is just one of many projects with foreign, non-U. S. entities that Cuba hopes will not only sustain but very sharply boost its struggling economy. 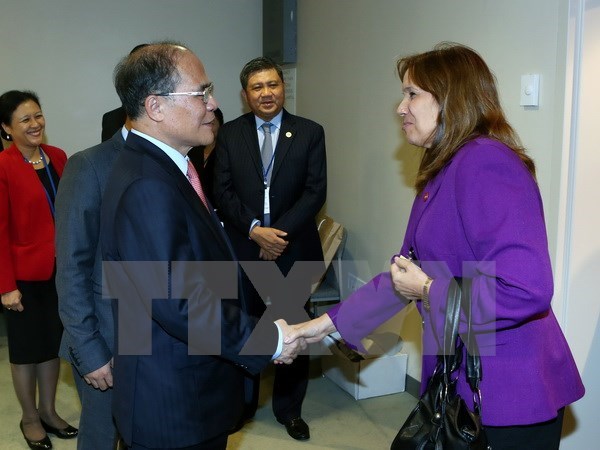 The Cuban dynamo largely responsible for driving and reviving the island's economy with fresh foreign friends is Ana Maria Machado. She is shown above making inroads with a top Vietnamese official. 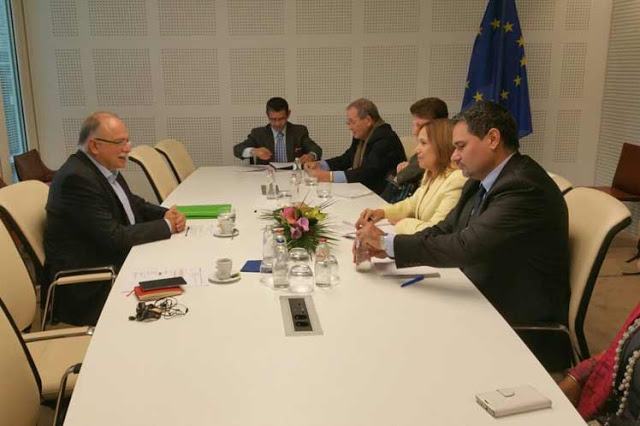 As the above photo illustrates, if you are a big-time foreign business-person wanting to invest in Cuba, you need to talk to Ana Maria Machado. She has superb ideas and the power to finalize deals. 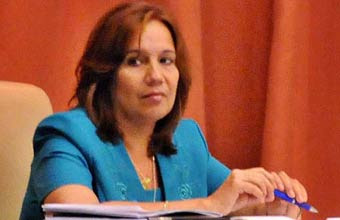 The 86-year-old Cuban President Raul Castro will step down on or before February 24, 2018, and there are many on the island who would like to see Ana Maria Machado as Revolutionary Cuba's first non-Castro leader. She is one of Cuba's Big Five Ministers right behind President Raul Castro but not as well known as First Minister Miguel Diaz-Canel and Second Minister Jose Ramon Machado Ventura {the last of the rebel icons who fought with the Castros in the war}. President Ana Maria Machado might be a long-shot but she has huge support among everyday Cubans and, reportedly, is being championed by TWO of Raul Castro's very influential daughters -- the social-minded Mariela and the business-minded Deborah. With the support of most Cubans as well as Mariela and Deborah, Ana is a force on the island -- a force for good!! 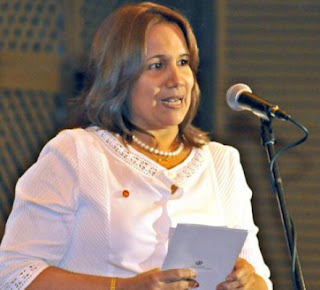 President Ana Maria Machado?
It sure has a nice ring to it!! 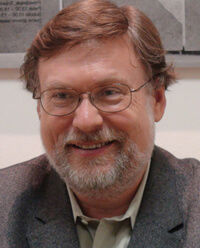 Meanwhile, in the USA the politics in Washington are unceasingly chaotic and the mainstream U. S. media has primarily turned into anti-Trump political propaganda machines advocating a coup-like overthrow of the controversial Trump presidency. SO, super-great Editorial Cartoonists like Daryl Cagle are just about the only U. S. sources providing fair and unbiased news in America these days. For example, Cagle's brilliant pen this week, with a remarkable economy of words, fully updated America on the latest monumental crisis in Washington, the one that indeed could end Mr. Trump's presidency. 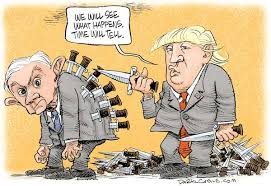 This is the graphic Daryl Cagle masterpiece that eerily updates the current most sensational Trump-related dilemma in Washington. It shows President Trump about to stick a 10th dagger into the back of his own Attorney General, Jeff Sessions. 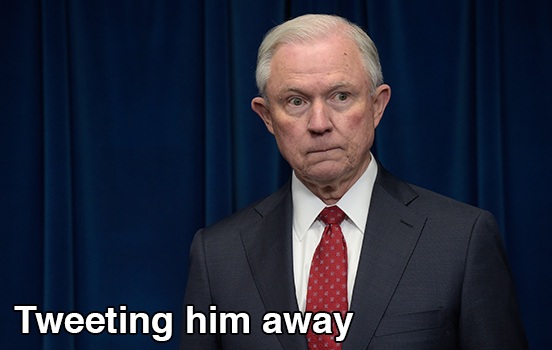 Stupidly, cruelly and famously, Trump began attacking Jeff Sessions first with his primary tool -- Tweets. But he continued the insanity in front of microphones and cameras. Despite a myriad of problems, Trump still has a solid core of about 35% of Americans that support him, warding off his legions of political and media opponents. But that 35% supports Sessions even more than Trump and if Trump fires or forces Sessions to quit as Attorney General, Trump's White House days will probably be numbered. Not only is Sessions, by all accounts, doing a good job as AG, but as a highly respected long-time U. S. Senator, Sessions was the first major American to bravely support Trump's candidacy at a time almost no one gave the billionaire non-politician a chance to be President, and without that backing from Sessions it would not have happened. So, with that backdrop, revisit Daryl Cagle's cartoon of Trump stabbing Sessions in the back repeatedly with dagger-like Tweets and even vocal comments. And then you'll know how tenuous Trump's hold on the presidency is.