How They Unite in America! 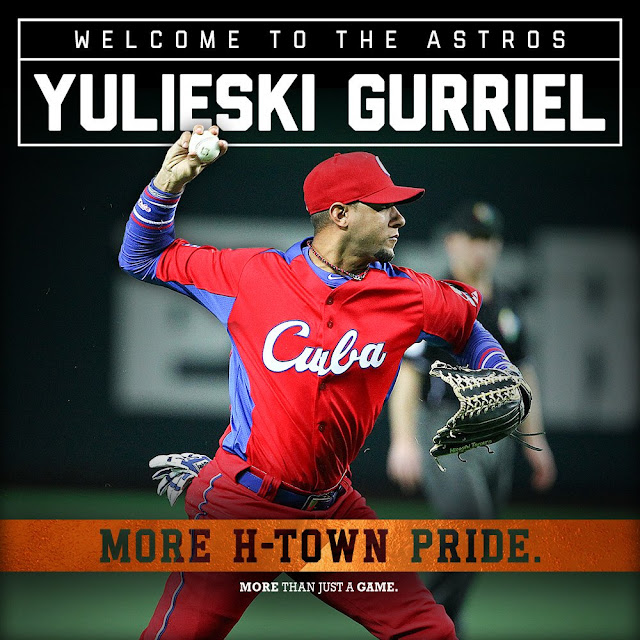 In these hot days of July-2017, millions of Americans and millions of Cubans in the two neighboring countries share a passion for baseball. That makes the graphic depicted above all the more bittersweet and heartbreaking for the vast majority of Americans, Cubans and Cuban-Americans. That includes the Cubans in Cuba who closely follow their beloved players in the American Major Leagues and it includes the strong majority of Cuban-Americans EVEN IN MIAMI who strongly oppose a U.S. Cuban policy dictated for decades by a handful of revengeful and self-serving Cuban hardliners in Miami and in the U. S. Congress. That cruel and basic fact is also a bittersweet heartbreak for America's best friends all around the world, as evidenced by the current 191-to-0 condemnation of America's Cuban policy in the United Nations. Yet that anti-democratic Cuban policy has persisted in the U. S. since January 1, 1959 -- or since the Cuban Revolution overthrew the very vile U.S.-backed Batista-Mafia dictatorship, chasing its leaders to South Florida where, for over half-a-century and through two generations, U.S. taxpayers and the U. S. democracy have paid astronomical prices for the failed but all-out and ongoing attempts by the Batistiano-Mafiosi remnants to re-capture the island. The extreme insanity, cruelty, and cowardice of the majority of Americans and Cuban-Americans to allow that unholy process to continue decade-after-decade is reflected daily in many facets, including by the prominent graphic shown above. NOW PERMIT ME TO EXPLAIN. 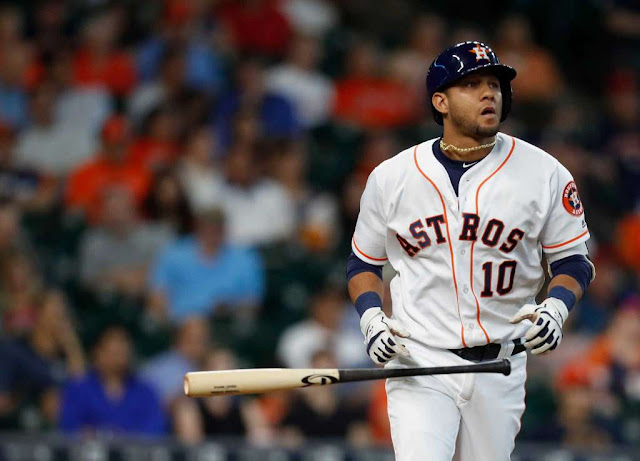 The U. S. Major Leagues have 30 teams and even the poorest among them lavish huge, multi-year and multi-million-dollar contracts on even moderately talented prospects. Cuba, a baseball gold-mine, has an abundance of such multi-millionaires in America, including Yuli Gurriel, the starting first baseman for America's best Major League team, the Houston Astros. Two days ago -- on July 1, 2017 -- Yuli belted a two-run homer and then a two-run double to give the Astros a 7-6 win over the New York Yankees. The double came against the great Yankee closer -- the Cuban Aroldis Chapman who the Yankees are paying $20 million a year on a long-term deal. And yesterday -- July 2, 2017 -- Yuli belted two home-runs to lead the Astros to an 8-to-1 win over the saintly New York Yankees. BUT EVEN MORE THAN THE SUCCESS YULI IS NOW HAVING WITH AMERICA'S BEST TEAM is the story of how Cuba's all-time greatest baseball family finally decided to defect to America to partake of the extremely easy pickings -- the multi-million-dollar deals. 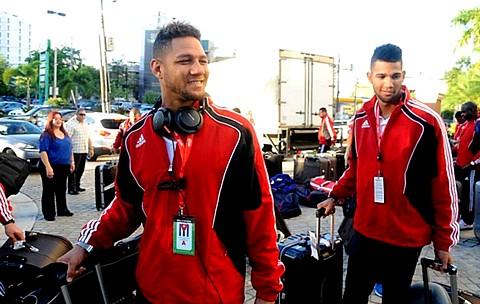 For well over a decade, Yuli Gurriel was the most beloved baseball player in Cuba. His father Lourdes Sr. was Cuba's and Fidel Castro's all-time favorite player; Lourdes Sr. began winning batting titles, MVP awards and Olympic Gold Medals for his beloved Cuba before Yuri was born in Sancti Spiritus, Cuba on June 9th, 1984. In his youth, at ages 18 and again at age 21, Yuri got word that the New York Yankees would give him a guaranteed $100 million contract if he would defect. Out of loyalty to his father and Cuba, he refused and for another decade continued to star in Cuba and on international Cuban teams...even as dozens of other Cubans defected to the U. S. for the guaranteed upfront millions-of-dollars. But a few years ago Yuli's father Lourdes Sr. became sick and it resulted in a drastic change of heart, AS REFLECTED BY THE PHOTO ABOVE. In 2016 Yuli and his brother Lourdes Jr., who is a decade younger than Yuli, defected. The photo above shows Lourdes Jr. on the left and Yuli at an airport the day of their defection. In July of 2016 Yuli, who is now 33-years-old, signed a guaranteed $47.5 million-dollar, 5-year contract with the Houston Astros. Shortly thereafter the now 23-year-old Lourdes Jr. signed a guaranteed $22 million-dollar contract with the Toronto Blue Jays and he is now a top Minor League prospect for Toronto. 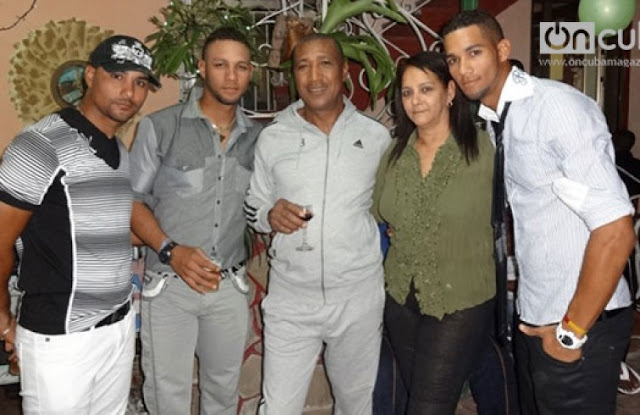 The OnCuba photo above shows Lourdes Gurriel Sr. {in the center} with his wife and their three baseball-playing sons. The guaranteed multi-million-dollar contracts Yuli and Lourdes Jr. have signed with Houston and Toronto in the American Major Leagues guarantee the financial well-being of this generation of the Gurriel family as well as the future generations of the Gurriel families. No one can blame the family decision they very reluctantly made. In this photo that's Yuli on the far left next to his brother Lourdes Jr. who is next to their ill father Lourdes Sr. Yuli, now the 33-year-old multi-millionaire and star first baseman for America's best team, the Houston Astros, has said, "I waited for well over a decade without any thoughts to defect out of loyalty to my country and to my father. But in my 30s, with my father sick, I along with my brother made the bittersweet decision to defect. I have no regrets, except one: I always dreamed of playing Major League baseball without having to defect. Politics loaded with revenge did not permit that. But I am at peace with my belated decision, and so is my father. Also, of course, I hope my supporters in Cuba are too." 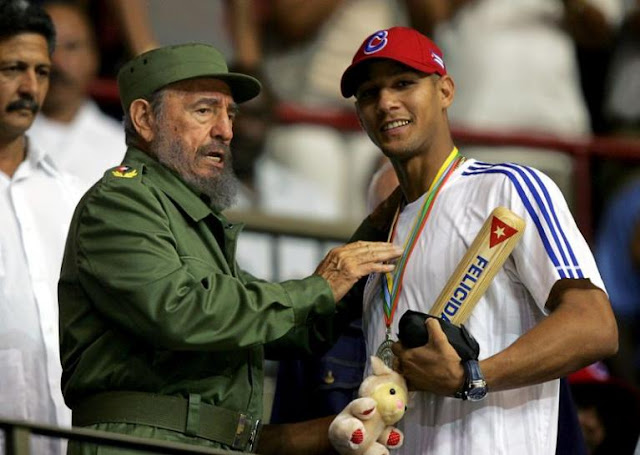 The iconic Fidel Castro was very close to the entire Gurriel Family. Fidel himself was a former Athlete of the Year in Cuba and, before deciding to become a revolutionary, he was offered pro contracts as a pitcher by both the Philadelphia Athletics and the Washington Senators. As Cuba's revolutionary leader before he died at age 90 on Nov. 25-2016, Fidel remained a huge baseball fan and his all-time favorite players were Lourdes Gurriel Sr. and Lourdes' son Yuli. The photo above shows Fidel with Yuli at a baseball game in Cuba. It is a photo that Yuli has reportedly proudly shown to his Houston Astros teammates. 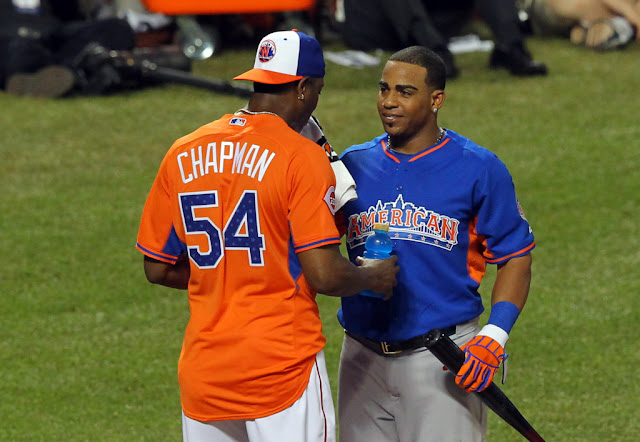 White-skinned Cubans starred in the U. S. Major Leagues beginning in the 1920s before 1947's break-through by Jackie Robinson for black players. But only in recent years have the floodgates and spigots opened wide with both white and black Cubans defecting to the United States lured by multi-million-dollar bonuses that have also attracted many unscrupulous agents and human-traffickers taking advantage of the unique U.S. embargo against Cuba that has been in effect since 1962, spawning criminal traffickers. In recent years the flood of Cuban baseball players defecting to the Majors have included a vast array of superstars like the two shown above -- Aroldis Chapman and Yoenis Cespedes. Both are now millionaires many times over and they both have long-term guaranteed contracts paying them in excess of $25 million a year -- Chapman with the New York Yankees and Cespedes with the New York Mets, and both are making millions-of-dollars more in endorsement deals from salivating corporate sponsors. 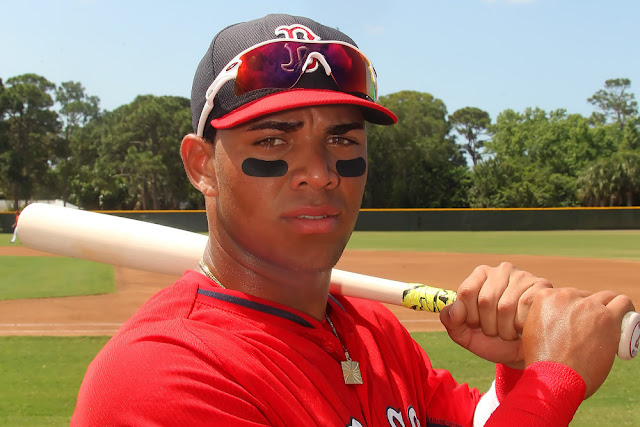 But Cuba's massive pipeline of baseball superstars is unending, as every Major League scout and every trafficker near the Caribbean knows. Take, for example, the physical specimen shown above. His name is Yoan Moncada. He was born on May 27, 1995 in Abreus, Cuba. He is now 6-foot-2, 205 pounds of pure muscle. As a speedy 17-and-18-year-old he starred for Cienfuegos in Cuba's top pro league. On February 23, 2015 -- after defecting from Cuba -- the Boston Red Sox signed Yoan to a guaranteed $31.5 million-dollar bonus contract. Then Boston, to get ace pitcher Chris Sale, traded him to the Chicago White Sox. Today Yoan is rated the #1 baseball prospect on the planet and he is about to be called up from the Minor Leagues by the White Sox. But remember, that original $31.5 million in 2015 was all guaranteed whether or not Yoan ever got a Major League base-hit. It is expected, in baseball-and-money-mad America, he will get a few thousand Major League hits and soon be getting in excess of $30 million-A-YEAR. 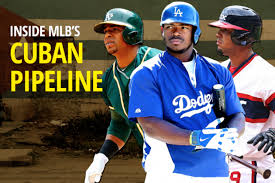 The ongoing CUBAN PIPELINE of baseball defections to the U. S. is one aspect of the unique U.S.-Cuban phenomenon that has existed since the Little Havana counter-revolutionary bastion was created in Miami following the victory of the Cuban Revolution on January 1, 1959. Since that day, the plethora of attempts to recapture Cuba have been unceasing from U. S. soil  -- including everything from numerous assassination attempts, the Bay of Pigs military attack, repetitive and very vile terrorist action, the longest {SINCE 1962} economic embargo ever imposed by a powerful nation against a small nation, etc., etc., etc. But the efforts have also included massively successful schemes to induce Cuban defections to the U. S. designed to weaken and destroy its sovereign revolutionary rule. Those defections include special discriminatory enticements for any and all Cubans, not just baseball players. But, when many millions of easy and guaranteed upfront dollars are readily available, baseball stars in Cuba are particularly vulnerable, as are peripheral elements such as human traffickers seeking their shares of the huge payoffs. And, as documented here, such enticements EVEN ENTICED -- with some lingering bittersweet regrets -- the Lourdes Gurriel family, THE RICH FAMILY THAT STILL HAS THOSE BITTERSWEET MEMORIES.