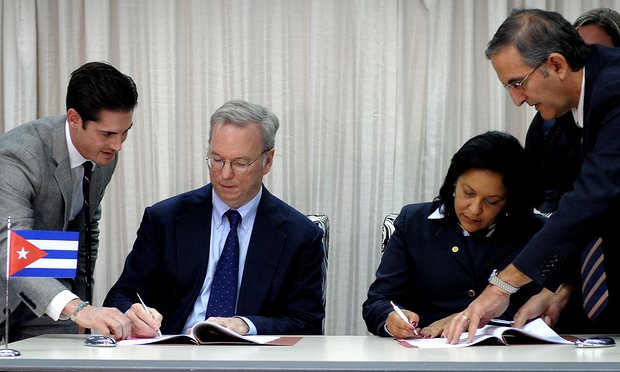 This photo, a significant one for Cuba, is courtesy of Yamil Lage/AFP/Getty Images. It shows Google Chairman Eric Schmidt in Havana yesterday -- December 12, 2016 -- signing a major telecommunications deal with Cuba. Signing for Cuba is Mayra Arevich, the President of Cuba's national telecom provider. Because of the U. S. embargo...the one stringently opposed by a 191-to-0 vote in the UN...the U. S. has not allowed a direct data line to the embargoed island, which has tried, with limited success, to make do with one that is routed from Venezuela. This important deal with Google -- the world's internet giant -- clears one of those obstacles thanks to President Obama's ongoing efforts to normalize relations with Cuba. Every positive step forward that Cuba and the U. S. have taken with Mr. Obama's astute, pro-democracy cooperation meets massive resistance from a few hardline Cuban-Americans who dictate Cuban policy in Congress. Obama has circumvented Congress by bravely and skillfully using Executive Orders to open embassies in Havana and Washington for the first time since 1961, created commercial air and cruise traffic from the U. S. to Cuba for the first time since 1961, and otherwise sliced majestically into the U. S. embargo that has been in effect since 1962, the one every nation in the United Nations considers the longest and cruelest economic embargo ever imposed by a strong nation against a weak one. The Google deal reflects Cuba's effort to accelerate contracts with U. S. companies in the remaining weeks that Obama is President and before Trump takes over on January 20th, 2017. Trump has promised the Cuban-American hardliners, which Cuba and the bravest of U. S. journalists call Batistianos, that he will quickly use his Executive Powers to erase all of the Obama-orchestrated advances, but that will take some doing and would further add to worldwide condemnation of America's Batistiano-driven Cuban policy, a denunciation of America that doesn't concern the Batistianos at all and doesn't concern Americans nearly enough. 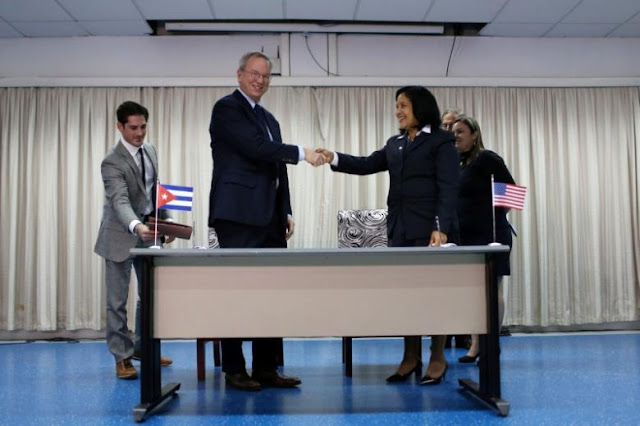 After signing the major deal in Havana today, this is Google Chairman Eric Schmidt shaking hands with Myra Arevich, the President of Cuba's national telecom provider. It's a huge U.S.-Cuba breakthrough. 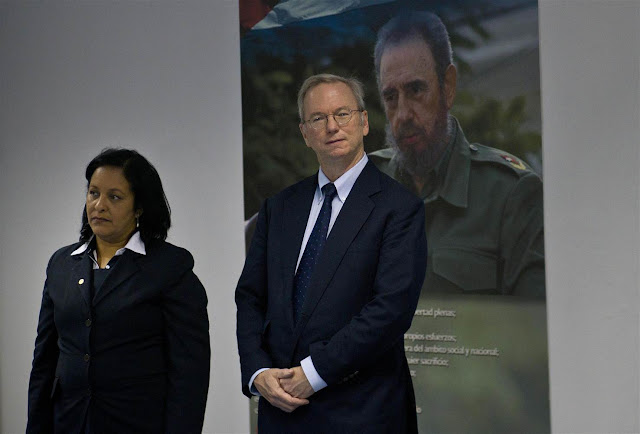 After the signing, Ms. Arevich  and Mr. Schmidt posed in front of a large photo of Fidel Castro, Cuba's revolutionary icon who died at age 90 on November 25th, 2016. A purposeful gesture by Mr. Schmidt? 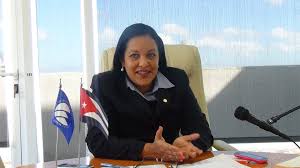 As Cuba tries to chart its post-Fidel and post-Obama course, Mayra Arevich has emerged as one of the most powerful players on the island. After the major deal with Google Monday, she refused a direct answer about whether Cuba is trying to accelerate deals with U. S. companies while President Obama remains in office to help make the threatened reversals by incoming U. S. President Trump "more irreversible." But Ms. Arevich did say, "We will try to do what is best for the Cuban people and I am confident the progress we have made with President Obama's judicious understanding will continue, and I think that would be good for Cuba and America. There is enough turmoil in the world and the Caribbean doesn't need pain and strife." 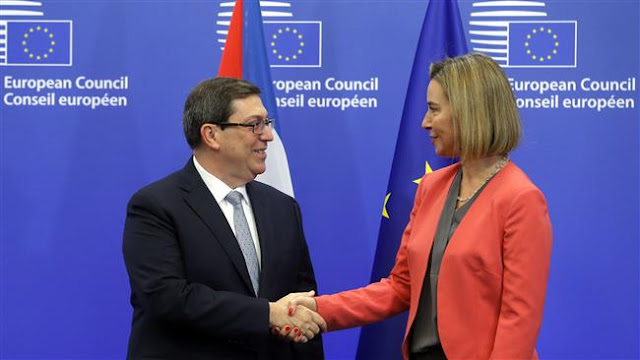 This AFP photo also reflects a major deal for Cuba signed yesterday -- December 12, 2016. This one was in Brussels, Belgium. That's Cuban Foreign Minister Bruno Rodriguez shaking hands with Federica Mogherini, the European Union High Representative. Influenced by the U. S. embargo of Cuba, the island for years has been the only Latin American nation that had not signed a Dialogue and Cooperative agreement with the EU. That changed yesterday when Cuba and the EU inked a friendly deal to talk and cooperate. Ms. Mogherini said, "Today we recognize that there's been change in Cuba. We are at a real turning point in relations between the EU and Cuba. The EU is showing its willingness to support the process of economic and social modernization in Cuba." It's only coincidental that the new deal with the EU comes so soon after the death of Cuba's legendary Fidel Castro. The process leading to the Dialogue and Cooperative agreement with the EU began in 2014 shortly after U. S. President Barack Obama began his efforts to normalize relations with Cuba. It is also a gesture by the EU to remind incoming U. S. President Trump that the world will not take kindly to his vow to erase "the advances" Mr. Obama has forged with the island. 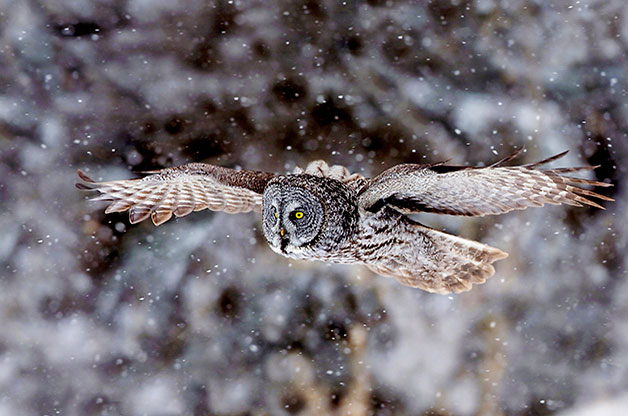 This magnificent photo was taken by Jessica Botzan and is used courtesy of my favorite magazine -- Birds & Blooms. That's a Great Grey Owl flying through a snowstorm as winter hits North America.