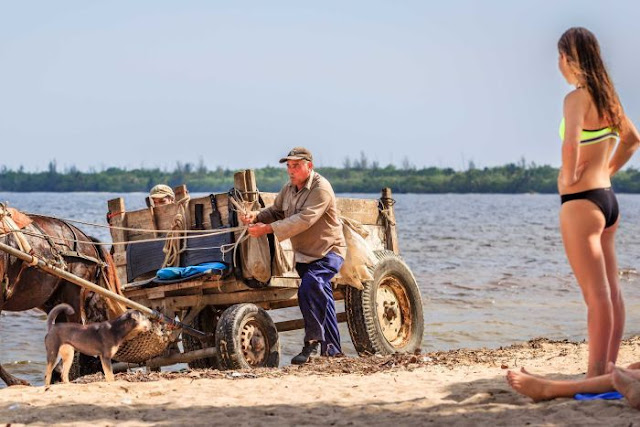 This interesting photo by Matt Rogers fronted a Sunday, Dec. 11, 2016 article that I think is the best Post-Fidel & Pre-Trump update on the vulnerable, ambiguous, always fascinating but fast-changing island of Cuba as it tries to accept the death of Fidel Castro, mourns the near-end of the President Obama kindnesses, and fears the upcoming President Trump threats. The article is written by Deepa Fernandes and you can dial it up via www.abc.net.au. The title is: "Cubans See Opportunities and Risks in Post-Fidel Era." Study the photo, which silently says a thousand words or more. The bikini-clad, beach-loving young woman seems mesmerized by the other side of the bucolic Cuban equation -- an old peasant driving an old, rubber-tired, horse-drawn wagon between the beach and the sea to gather debris washed ashore that he might later barter. The union or nexus of the young lady and the old man creates the perfect epilogue to summarize the fast-fading and memorable year of 2016 for Cuba. Notice that the old man, in his survival mode, totally ignores the young lady that is...at least for that pivotal moment in time...focusing all her attention on him, a typical Cuban less privileged than her. They are so close, just a few feet apart, and yet separated by different, non-converging worlds. 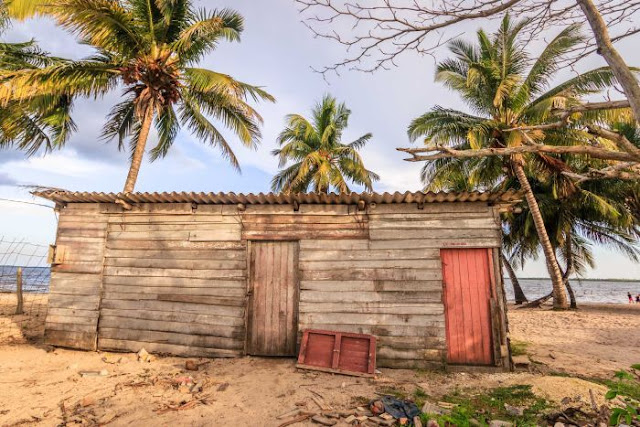 This Matt Rogers photo also featured in the aforementioned Deepa Fernandes article shows an old dilapidated shed on a run-down, neglected Cuban beach. The caption reads: "Oceanfront real estate like this in Boca Camarioca can be..." CAN BE WHAT? Well, the shed could be demolished, the beach cleaned up and...maybe...a 5-star hotel could replace it IF Cuba succeeds in attracting foreign investments that could miraculously alter one of the planet's most beautiful and potentially most promising nations. America's outgoing President, Mr. Obama, would like to see that to enhance his legacy that already encompasses the best and kindest American overtures ever extended to the imperialist coveted but pugnacious, sovereignty-loving island. Perhaps the best line in the insightful Deepa Fernandes update is this one: "Many Cubans see opportunities as the tourism industry grows, but some are worried the island's egalitarian ethos will be effected." In other words, Cubans want to be a part of the modern world where they can embrace capitalism like China or Vietnam so they can aspire to at least a middle class existence, yet they want to chart their own course. They remember the U.S.-backed Batista-Mafia dictatorship in the 1950s that brutally mandated extreme wealth for a few and extreme poverty for the vast majority. From their poor but egalitarian society that the Cuban Revolution ushered in beginning in 1959, many Cubans gaze over at the U. S. now and see things they don't envy -- such as the disparity between the haves and have-nots as well as what they nervously perceive as a tolerance for crime, even police shooting unarmed civilians, that they wouldn't want to be forced once again to tolerate. So, Sunday's Deepa Fernandes article, I believe, best illustrates those aspects and variables into the still vulnerable but extremely promising and fast-changing island of Cuba, an island that unwittingly has played such a mammoth role in reshaping America's image {as reflected by the 191-to-0 UN vote condemning America's cruel, Batistiano-directed Cuban policy} and by the cancerous Batistiano growth within the bowels of the U. S. democracy {as reflected by the fact that the U. S. government, even during the decent and brave two-term Obama administration, can't correct its onerous Cuban blight even as the entire world condemns it}. Deepa Fernandes addresses those nagging issues but so do the superb Matt Rogers photos -- especially the bikini-clad, upscale young lady mesmerized by the old man who is just trying to survive, and by the image of the old shed on a neglected beach that may be soon replaced by a big 5-star hotel...or something akin to it! 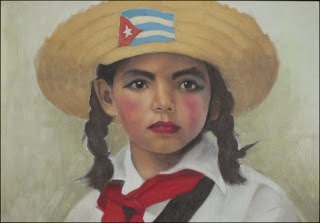 But Cuba's unending melodramatic iterations have yet to decide who will chart the island's future course -- egalitarian Cubans on the island or rich Cubans living on foreign soil!! I bet this rosy-checked little Cuban girl is wondering about that unknown too.