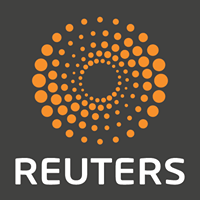 The London-based Reuters news agency consistently provides the best and fairest coverage of news affecting Cuba, which also particularly affects the United States and even has worldwide repercussions. And that reporting is variously provided by superb journalists on the island including Sarah Marsh, Marc Frank, Nelson Acosta and Frank Daniel. Yesterday -- Dec. 6-2016 -- the primary Reuters article from its stellar reporters in Havana and Washington was entitled "Cuba, U. S. to Discuss Detente in Wake of Trump Election." As usual, that Reuters article provided the best up-to-the-minute update on Cuban-U. S. relations at a critical juncture for both countries following the election of Donald Trump as the next President of the United States on November 8th and the death at age 90 of Cuba's revolutionary icon Fidel Castro on November 25th. That team of reporters recognizes that today's U.S.-Cuban session will effectively conclude the Obama administration's historically positive influence on relations between the two nations, which means the next major events will await the incoming presidency of Donald Trump, a transition that presumably goes from the all-time most Cuba-friendly Democratic presidency to what may very well be the all-time most unfriendly Republican presidency.

The above-titled article yesterday was written by Sarah Marsh with input from three other Reuters Cuban experts -- Frank, Daniel and Acosta. It's major points included: "Cuba and the United States will draw up a roadmap for deepening their detente on Wednesday -- Dec. 7th -- in a first meeting since the election of Donald Trump as U. S. president and the death of Cuban revolutionary Fidel Castro;" "The fifth U.S.-Cuba Bilateral Commission comes at a time of increased uncertainty about the future of U.S.-Cuban relations given Trump's promise to end the detente;" "The administration of outgoing U. S. President Barack Obama has pressed American companies to complete cutting business deals in Cuba to help further cement the president's policy by the time Trump takes office on January 20th;" "Several major U. S. companies, such as General Electric, are in the final stages of negotiating deals with Cuba...and more than half a dozen announcements, ranging from cruise ships and travel to manufacturing and telecommunications are believed to be in the works;" "Castro had given Cuba an outsized influence in world affairs during his half-century as president, partly by clashing with the United States;" "Fidel's younger brother Raul, who took over as president in 2008, made history two years ago by agreeing with Obama to end Cold War hostility and start normalizing relations. Since then, the two countries have opened embassies, restored commercial flights, opened travel options and negotiated agreements on issues affecting the environment, law enforcement, the postal service and communications;" "Obama, who visited Cuba earlier this year, has also gradually poked holes in the U. S. embargo against the island through executive actions." Trump's executive actions can close those "holes." 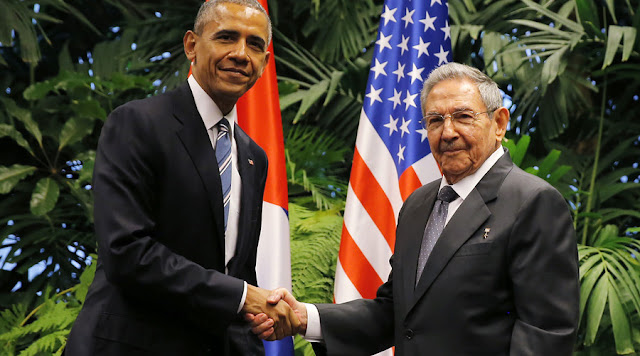 U. S. President Obama made history by merely talking to and shaking hands with Cuban President Raul Castro. But in the last two years of his two-term, 8-year presidency, Mr. Obama didn't stop there. With a combination of courage, astuteness and decency unmatched by any of the nine prior U. S. presidents, Mr. Obama earnestly tried to normalize relations with the nearby island, showing more respect for totally innocent everyday Cubans than his predecessors had ever dared to display. Also, the democracy-loving Mr. Obama, unlike the proponents of America's vile Batistiano-driven Cuban policy, was concerned with the negative image of America and of democracy that the U. S. Cuban policy spread all around the world as the recent 191-to-0 Pro-Cuba-Anti-U. S. vote in the United Nations emphatically and dramatically revealed. 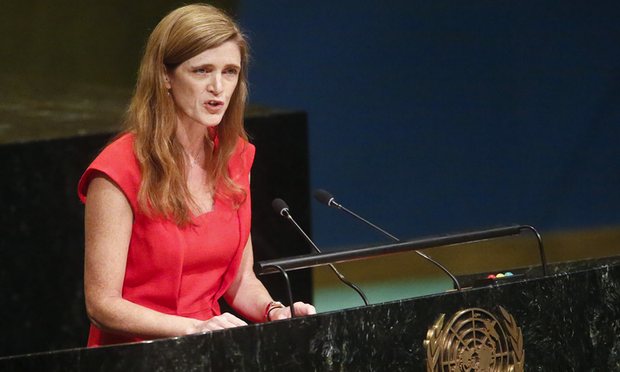 The U. S. Representative to the UN, Samantha Power, shocked many democracy-lovers and angered many Batistiano disciples by amazingly refusing to vote in favor of America's own Cuban policy, a policy dictated for decades by visceral Cuban-Americans in the U. S. Congress aligned with self-serving right-wingers in both Congress and Republican White Houses. The above photo shows the decent and brilliant Ms. Power explaining to the world on Oct. 26-2016 why she could not use her U. S. vote to support a Cuban policy mandated by a dysfunctional 535-member Congress that compliantly capitulates to a few extremists. 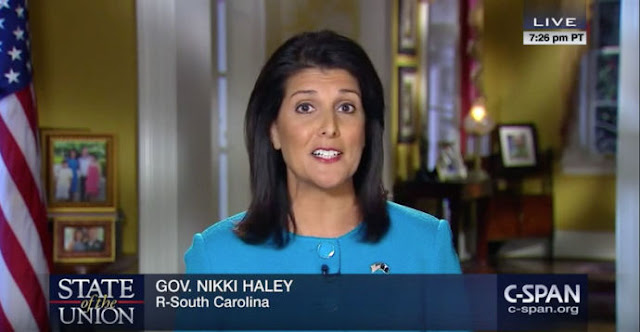 President-elect Donald Trump has already named Nikki Haley as the next U. S. Representative to the United Nations, replacing the superb Samantha Power. That selection by Trump is enough to cause Cuba to prepare for war. Ms. Haley has been the Governor of South Carolina since 2011 because she is a darling of the right-wing Tea Party and the Bush dynasty, two elements that would love to see Cuba on its knees and under the yoke of another U.S.-friendly Batista-type regime. During the Republican primary Ms. Haley said some terrible things about Donald Trump because she campaigned wildly and wickedly for Cuban-American U. S. Senators Marco Rubio and Ted Cruz, two of the most vicious and most powerful anti-Cuba zealots.

Nikki Haley's first choice to be the next President of the United States was/is the Senator from Miami -- Marco Rubio. Rubio has made his fortune and his political hay by securing support from the Bush dynasty, the Tea Party and a plethora of right-wing billionaires who quickly spotted the "For Sale" sign many feel is Rubio's main calling-card, that plus his anti-Cuban diatribes that seem to show zero regard for everyday Cubans on the island but intense regard for his own economic and political prowess. Now entering his second 6-year term in the Senate, Rubio accomplished nothing his first-term except campaigning for money donations while busily seeking the presidency and even avoiding the most Senatorial votes of any Senator. Nikki Haley will soon be using her UN influence to promote Rubio's ongoing second bid for the presidency, meaning the run-up to the 2020 election will again consume Rubio, along with his vicious anti-Cuban rants and anti-Cuban Senatorial maneuvers. When the above photo was taken for ABC-TV news, Governor Haley was on stage with Marco Rubio saying vile things about Donald Trump, who will become her boss in January. After Rubio was roundly defeated by Trump in the Republican primary in Rubio's own state of Florida, Governor Haley's second choice for President was the second most vicious anti-Cuban Cuban-American candidate, and not her still-viable and now new boss -- President-elect Donald Trump. 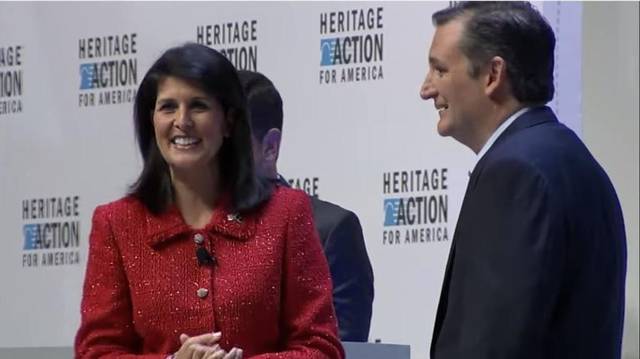 Once Marco Rubio was booted out of the presidential race by Trump, Nikki Haley campaigned wildly for the vicious anti-Cuban Cuban-American Senator from Texas, Ted Cruz. Cruz also is a product of the Bush dynasty and the Tea Party but also, like Rubio, has a powerful stable of right-wing billionaires backing his presidential candidacy. One of the odd things that reflects the Batistiano grip on the U. S. democracy, I think, is that the majority of Cuban-Americans favor Obama's sane and decent approach to Cuba but there seems to be no chance such moderate Cuban-Americans can ever get elected to Congress or be serious candidates to be Presidents. That fact, coupled with the unanimity vote in the UN -- 191-to-0 -- condemning America's Cuban policy, reflects a Batistiano-fueled weakness in the U. S. democracy, one that might result in the Batistianos capturing the U. S. before they re-capture Cuba. Nikki Haley's appointment by Trump is a tip-off that the incoming Republican president will take his Cuban orders from only anti-Cuban zealots, ignoring the wishes of most Americans, most Cuban-Americans and all the nations of the entire world. 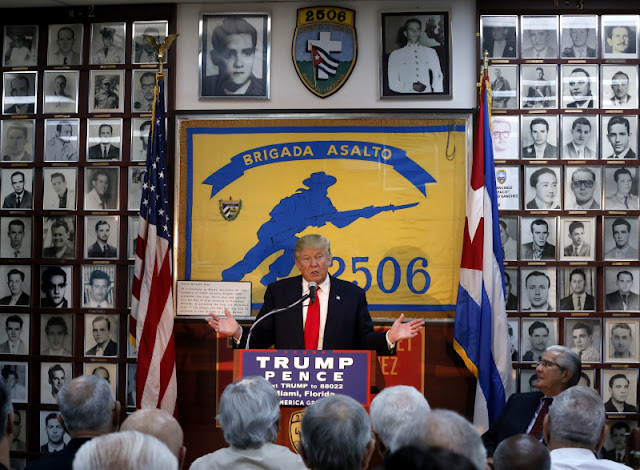 But this photo remains more ominous regarding Cuba's fate than Trump's appointment of Bush-disciple Nikki Haley and his reported consideration of lofty appointments for even more dangerous Bush disciples such as Mauricio Claver-Carone, John Bolton, etc. This photo shows Trump prior to the election in Miami's Little Havana telling the elderly remnants of Brigade 2506 that he would reverse Obama's Cuban sanity and do their bidding, hinting strongly that as Commander-in-Chief he would recapture Cuba for them before the last of them died. Brigade 2506 is the CIA-backed unit that attacked Cuba in April of 1961, a not-so-brilliant historical assault that enabled front-line fighter Fidel Castro to race to the front lines and shock the world anew with his massively successful defense of Cuba and his revolution. It was his colossal defeat of Brigade 2506 that solidified Fidel Castro's international legend from 1961 till his death in 2016, and will further solidify his legacy. As President, Trump can use his Executive Power to reverse Obama's positive Cuban overtures and also use his powers as Commander-to-Chief to keep his promise to the aged survivors of Brigade 2506 to get revenge for their defeat long ago. But in doing so, he would exacerbate a vile Cuban policy and sacrifice even more of America's reputation than the 191-to-0 UN vote indicates has already been expended, starting in 1952 when the U. S. teamed with the Mafia to support the brutal, thieving Batista dictatorship and topping off that calamity with an even bigger one -- allowing the ousted Batistiano leaders to resurrect their lucrative Banana Republic on once-sacred American soil. 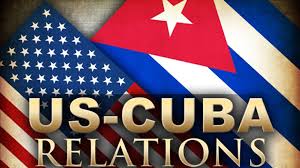 As referenced by the aforementioned Reuters article, today -- Dec. 7-2016 -- the United States and Cuba will hold their first bilateral meeting since the death of Fidel Castro on November 25th and the election of Donald Trump as the next U. S. President on November 8th. It is an important meeting considering that the U. S. transition from an Obama to a Trump presidency also involves such things as a Nikki Haley replacing a Samantha Power at the United Nations, the Batistianos gaining even more power in Congress, and even Brigade 2506 old-timers in Miami soon having a direct hook-up with the Commander-in-Chief himself!!
Ominous? Absolutely! Scary? That too! 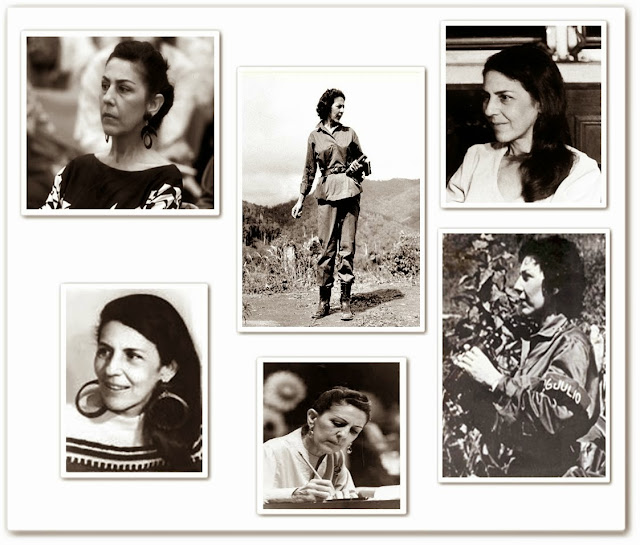 Remember the proclamation Cuba's incomparable revolutionary heroine Celia Sanchez first laid-down in 1959 right after she learned the ousted Batista-Mafia leaders had safely resurfaced in the U. S: "The Batistianos will never regain control of Cuba as long as I live or as long as Fidel lives." Celia died of cancer at age 59 on Jan. 11-1980; Fidel died of old age at 90 on Nov. 25-2016. Beyond that amazing prophecy, Celia made no prediction regarding Cuba's fate. Now in these perilous times, I wish she had.