Cuba vs. Trump and COVID-19

As of today -- Friday, April 17th, 2020 -- the island of Cuba reports 923 confirmed cases of the Coronavirus. More and more, even Americans are being told that the genocidal Trump/Little Havana administrations in Washington and Miami are gradually increasing the death totals in Cuba. For over two decades Anthony DePalma was the top Cuban expert at the New York Times. Today Mr. DePalma returned to write the major Editorial in the NY Times. It is entitled: "TRUMP PANDEMIC TACTICS HURT CUBANS." In assessing how President Trump and the Counter Revolutionary Cuban extremists who dictate America's Cuban policies are taking advantage of the COVID-19 pandemic to further assault everyday Cubans on the island, Mr. DePalma said: "Cuba's fragile economy, already suffering {from Trump's and Little Havana's genocidal blockade}, was dealth a sharper blow when all the tourist hotels were forced to close, putting more than 120,000 people out of work on the island." As one of America's all-time keenest observers of the failure to recapture Cuba for the exiles from the Batista-Mafia dictators who were chased to the U. S. way back in January of 1959, Anthony DePalma's New York Times Editorial today is a keen perspective on how everyday Americans permit self-serving politicians like Trump, controlled by a few Cuban extremists, get away with committing genocide against masses of Cubans who happen to not to be in Miami, Newark, or the U. S. Congress. 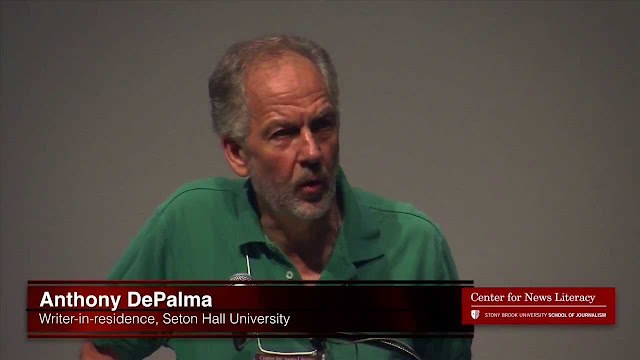 Some of the best books about Cuba and its tumultuous relationship with the United States have been written by Anthony DePalma, and he has a brand new one!! 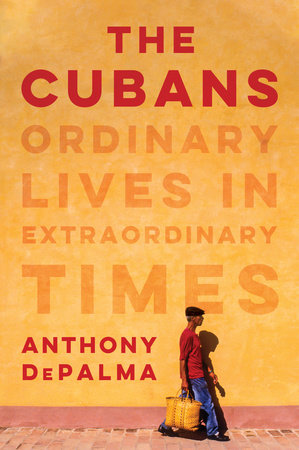 This is Anthony DePalma's next must-read book about the lives of Cubans on the island today after they...and their parents and grandparents...have faced over six decades of being targeted unmercifully by the world's nearby Superpower acting on behalf of two generations of exiles from the brutal Batista regime. This next DePalma book will be published by Penguin in a little more than a month -- on May 26th, 2020. 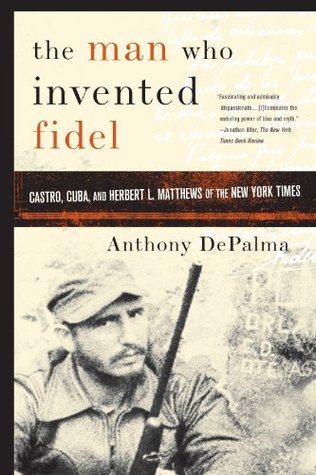 Anthony DePalma, of course, wrote the classic book "THE MAN WHO INVENTED FIDEL." 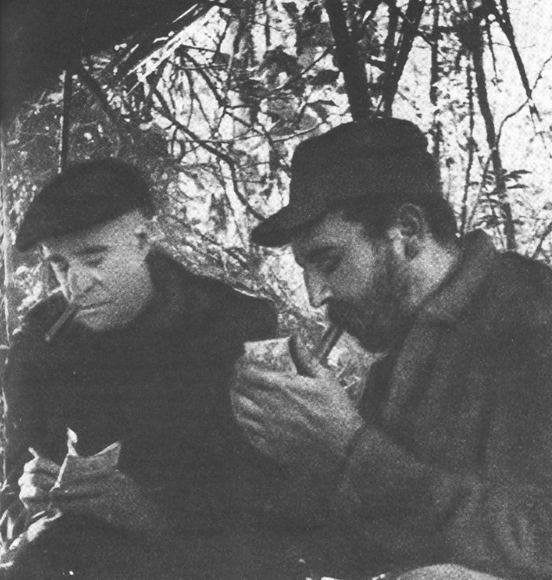 Of course, the legendary NY Times journalist Herbert Matthews was the man who invented Fidel Castro. Appalled by the brutalily that the U.S.-backed Batista-Mafia dictatorship was meting out to everyday Cuba, Matthews wrote front-page stories in the powerful NY Times about what he saw first-hand in Cuba starting in 1952. This historic photo was taken in 1957 when Matthews had his monumental interview with Fidel in the Sierra Mountains of far eastern Cuba. This photo and interview, when they were published in the NY Times, told the world that Fidel was "still alive and still LEADING THE REBEL ARMY." That was important because dictator Batista in Havana and his stooges in Washington were telling the world that Fidel was dead and that the rebel army "fighting weakly" far from Havana would be totally wiped out in a few days. Fidel, as shown above, told Matthews that not only was he still alive but his rebels would soon begin capturing cities on the eastern end of Cuba "and then continue all the way to the west, till we capture Havana." 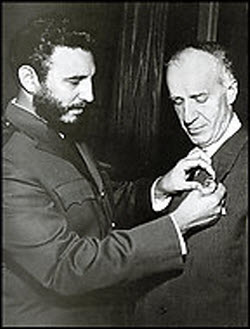 After all of Batista's predictions in 1957 were debunked and all of Fidel's predictions in 1957 came true, the photo above was taken in 1960. That was the second year of Fidel's long reign as the leader of Revolutionary Cuba. In 1960 this photo shows Fidel pinning a medal on the lapel of the appreciative Herbert L. Matthews, the legendary New York Times journalist that Anthony DePalma named "The Man Who Invented Fidel." Mr. Matthews is famed to this day for telling NY Times readers about the Batista-Mafia brutalities in the 1950s prior to Fidel's revolutionary victory. 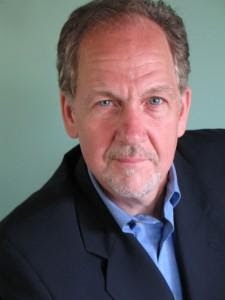 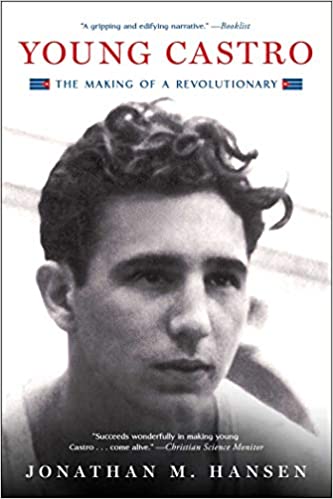 In addition to Anthony DePalma's new book about Cuba that will be published on May 26th, 2020, the book shown above entitled "YOUNG FIDEL" by Harvard historian Jonathan M. Hansen will be published by Simon & Schuster on June 30th, 2020. 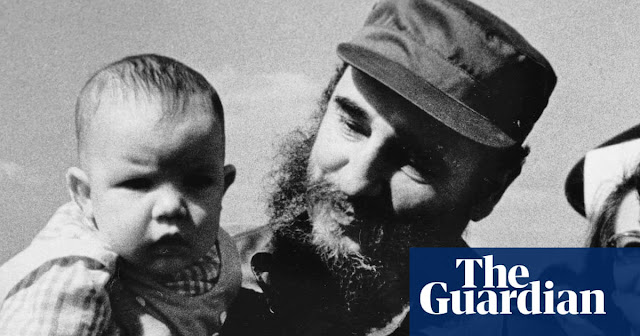 The London-based The Guardian says that both Anthony DePalma's new book and Jonathan Hansen's new book are both important because "Fidel still rules Cuba in 2020 although he died at age 90 in 2016." 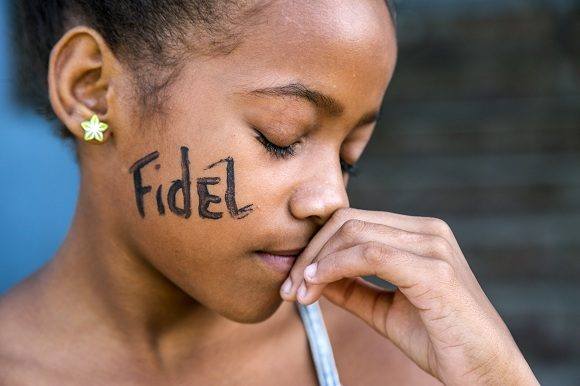 And The Guardian is correct.
AND ALSO...BY THE WAY: 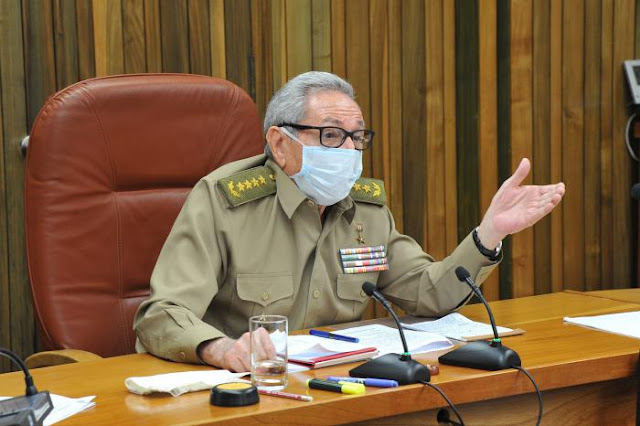 Behind the Coronavirus mask is Raul Castro. He is shown Friday afternoon, April 17-2020 chairing a meeting about the COVID-19 pandemic. Raul Castro turns 89 on June 3rd. He is sitting at the top of the photo shown below. 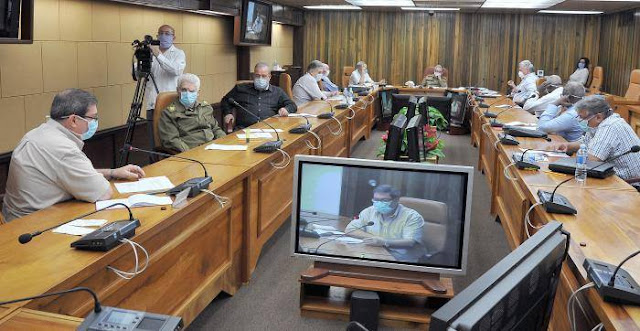