Up to Trump to Revive It!! 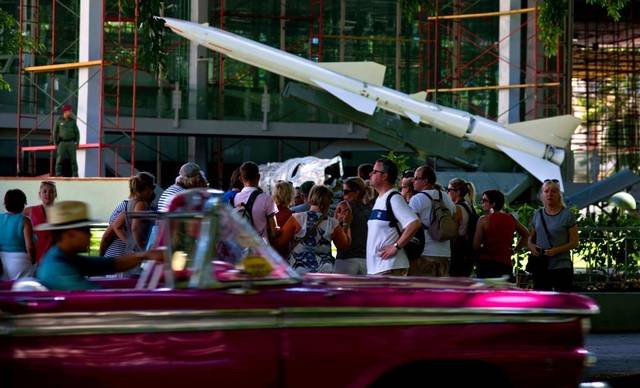 Yesterday -- Nov. 10-2016 -- the Miami Herald used the above photo to highlight a major article heralding the startling election of Donald Trump as the next U. S. President, which Miami stalwarts believe will reverse all of President Obama's rapprochements with Cuba and resurrect the Cold War...or possibly a Hot War. The photo is courtesy of Ramon Espinosa/AP and the article was written by Nora Gamez Torres and fronted by the headline "Cloud of Uncertainty." The photo above, deemed appropriate, shows tourists at Revolutionary Square in Havana listening to a guide as they stand next to a Cold War anti-aircraft missile. 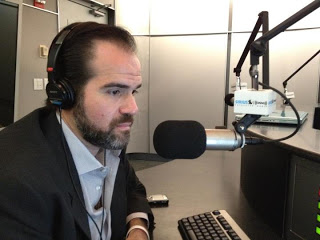 The Miami Herald article stressed the comments of Mauricio Claver-Carone, one of Washington's most powerful and most visceral leaders of America's lucrative Anti-Castro Cottage Industry. Claver-Carone is the Director of the rich "U.S.-Cuba Democracy PAC," has his own visceral anti-Castro nationally broadcast radio show, and his own visceral anti-Castro "Capital Hill Cubans" blog. He told the Miami Herald yesterday, "As for President-elect Trump, his Cuban-American supporters will surely hold him accountable to reverse Obama's executive orders." Claver-Carone used the Herald article and his other venues to celebrate the easy reelections Tuesday of Miami's four visceral anti-Castro members of the U. S. Congress -- Senator Marco Rubio and Representatives Ileana Ros-Lehtinen, Mario Diaz-Balart and Carlos Curbelo. Claver-Carone, of course, never has to explain why Miami's political system only sends visceral anti-revolutionary Cuban-Americans to Congress even though most Cuban-Americans in Miami favor Obama's efforts to normalize relations with Cuba. And Claver-Carone never has to explain why he so viscerally promotes an American Cuban policy that the rest of the world so sanely disagrees with by a 191-to-0 plurality. Of course, as long as the Anti-Castro Cottage Industry remains so immensely lucrative and revengeful for powerful patrons like Claver-Carone, there will always be enough politicians either in Congress and/or the White House to support the dastardly Cuban policy he espouses but the entire world in unanimity opposes.

While the Miami Herald will forever remain an integral part of the Anti-Castro Cottage Industry, the largest and best newspaper in Florida is the Tampa Bay Times. It is not a supporter of the anti-American Cold War attitudes regarding Cuba. A major editorial in the Tampa Bay Times yesterday blared this headline: "EDITORIAL: DON'T REVERSE COURSE ON CUBA." The Editorial cogently suggested: "The incoming Trump administration should send an early sign to Cuba that there is no interest in resurrecting the Cold War." Like the vast majority of democracy-lovers in the U. S. and around the world, the editorial writers at the Tampa Bay Times worry that the Republican President-elect Trump aligned with both chambers of Congress that are dominated by Republicans can...and might...defy the rest of the world and return America's Cuban policy to a Cold War or even a Hot War posture that Cuba would certainly lose but not without a fight. 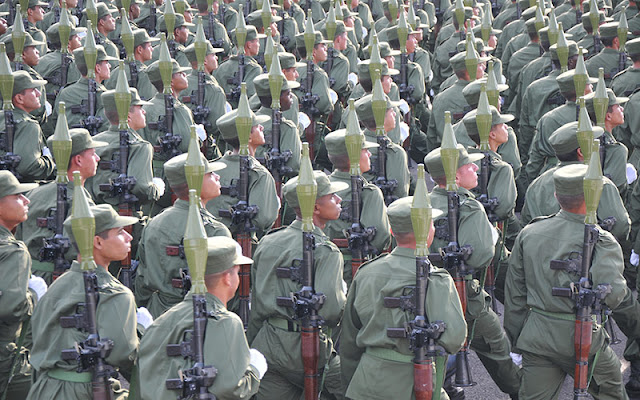 After the election of Donald Trump as the next U. S. President, Cuba's small and lightly armed military forces have been put on alert and are undergoing training exercises across the island. A determined decision by a Republican Commander-in-Chief in the U. S. White House could easily wipe out Cuba's army...but not without a revolutionary or Bay of Pigs-type resistance that would likely have world-wide moral support and likely require provoking Cuba into something that could be deemed a pretext -- such as the USS Maine blowing up in Havana Harbor to provide the pretext for the Spanish-American War in 1898 or the Brothers to the Rescue planes from Miami inducing a Cuban reaction that provided the pretext for the Helms-Burton Act that ended President Clinton's plans to normalize relations with Cuba and forced him to sign the bill that still direly harms Cubans on the island while massively enriching and empowering a special contingent of rich and powerful anti-Castro Cuban-Americans in the United States. 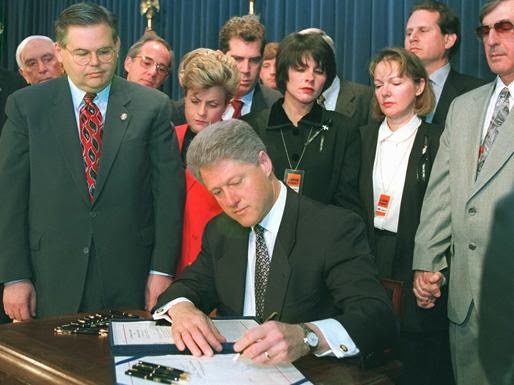 This photo shows President Bill Clinton signing Helms-Burton into law on March 12, 1996, shortly after Cuba shot down two Brothers to the Rescue airplanes out of Miami that it says was taunting Cuba with overflights. Prior to that pretext, Clinton was striving to normalize relations with Cuba but till this day Helms-Burton codifies the most anti-Cuban aspects of America's Cuban policy, the precise policy that the nations of the world strongly oppose by a 191-to-0 vote in the United Nations. At this signing ceremony -- and waiting for their souvenir pens as they look over President Clinton's right shoulder -- are Cuban-American Senator Bob Menendez from New Jersey and Havana-born Congresswoman Ileana Ros-Lehtinen from Miami. Both Menendez and Ros-Lehtinen remain Helms-Burton stalwarts in the U. S. Congress today. 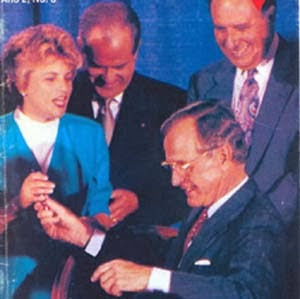 The Bush dynasty, more so than such anti-Cuban measures as President Clinton in 1991 being induced to sign Helms-Burton, is responsible for a handful of anti-Castro zealots being able to dictate America's Cuban policy in the U. S. Congress regardless of whether there is a Republican or Democrat in the White House. The above photo shows President George H. W. Bush handing a souvenir pen to Miami's Havana-born U. S. Congresswoman Ileana Ros-Lehtinen. She has been an unchallenged member of Congress since 1989 when Jeb Bush, on his way to two terms as Florida's governor, was her Campaign Manager. 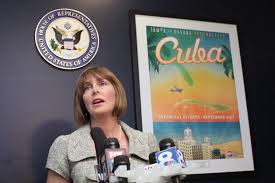 Born in Miami in 1966, Kathy Castor has represented Tampa Bay in the U. S. Congress since 2007. On behalf of democracy, the American people, the citizens and business people of Tampa Bay, and the majority of Cubans and Cuban-Americans, Congresswoman Kathy Castor has bravely and doggedly used her decade in the U. S. Congress trying to promote normal relations between America and the nearby island of Cuba.

But the saneness of Kathy Castor's diligent work in the U. S. Congress to help Americans, Cubans, Cuban-Americans, and her Tampa Bay constituents has mostly been unfruitful. That's because America's Cuban policy, since 1898 and especially since 1952, has primarily been dictated not by democracy but by a few right-wing, self-serving thugs. And that dichotomy should shine even brighter spotlights on the sheer decency of democracy-loving people like Congresswoman Castor AND ON that 191-to-0 vote in the UN.