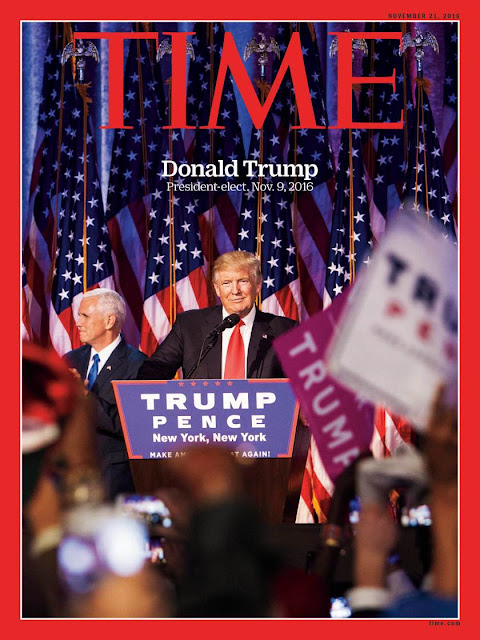 My mailbox on consecutive days this week included not one but two complete editions of Time Magazine. The first arrived on election day -- November 8th -- before the final presidential election results. That one told me what the mainstream media had told me every day for the past year, which was that Hillary Clinton would be the 45th President because the sexiest, misogynist, and totally unqualified Donald Trump, her only opponent, didn't stand a chance to get elected. Then the next day -- November 9th, after the final results were in -- the above issue of Time Magazine arrived in my mailbox. As you can see above, the front-cover title -- amazingly small to be sure -- was: "DONALD TRUMP: President-Elect, Nov. 9, 2016." The mainstream media is now immersed, as it will be for days to come, with all of its star "journalists" trying to explain away how biased, stupid and off-base their reporting has consistently been during the exhaustive two years of the almost interminable billion-dollar-plus election cycle. If nothing else, the result of the Trump triumph -- the most shocking in America's history -- has proved how incredibly biased the propaganda-fueled mainstream media has become. The prime victims of the consequences, unfortunately, are {1} Democracy; and {2} the vast majority of the American people who -- unlike the billionaires who own all of the mainstream U. S. media -- DO NOT have the money to purchase their democracy. Those two reasons explain why Trump and not Clinton is the President-elect of the world's superpower, the deeply divided United States of America. If you agree that the mainstream media has lied to you for the past two years about the presidential election, please note that I am merely an ordinary, democracy-loving American far removed from the mainstream media. Therefore, if you read on you will get a non-biased perspective that is not bought-and-paid-for because this one-trick-pony blog has never...and never will...make a penny from any outside source, including ad dollars, although its Alexa Rank ranking causes me, its only contributor, to get laughable offers. 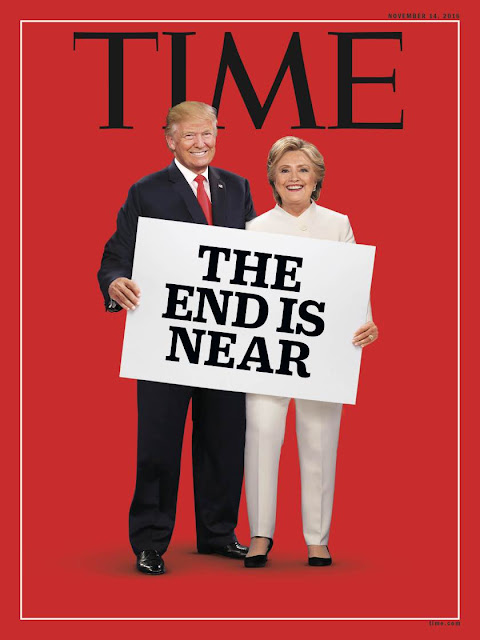 My first edition of Time Magazine this week was dated November 14th but it arrived in my mailbox on November 8th -- election day -- before the election results were known. The cover -- above -- depicted Bill and Hillary Clinton holding up a huge sign declaring that "The End Is Near." They were not forecasting that the end of civilization was near. They were predicting the EASY Nov. 8th election that would SURELY result in Hillary's first presidential term following Barack Obama's two terms, George W. Bush's two terms and Bill Clinton's two terms. I mean, it was an easy prediction that Hillary's Republican opponent, Donald Trump, was totally unqualified to be President and Commander-in-Chief not to mention that he was also a blatant racist and an even greater misogynist. At least, that's what the Democrats as well as many Republicans were preaching. But mostly the extremely biased and incompetent U. S. media -- both print and electronic -- harped on those propaganda themes day-after-day and night-after-night for two solid years. And so, it was a deteriorated U. S. media, more than anything else, that elected a man, Mr. Trump, that I agree at least starts off as totally unqualified to be President of the United States. The media used a whole year of incessant pundit-driven anti-Trump propaganda to make sure that Trump didn't win the White House, naively believing that most Americans still trusted the media that was so well trusted from Ben Franklin's day until the last of the respected broadcast journalists, Walter Cronkite, departed CBS.
The billionaires who now own the entire mainstream U. S. media, such as Time, were and are extremely biased against Trump because they are not sure they can control him as they now control other politicians in Congress or those who aspire to be in the White House. Such control is easily maintained in a system in which billionaires, thanks to a 2010 Supreme Court ruling, can make unlimited political donations to go along with the long-established fact that 30,000 or so well-heeled and very effective lobbyists in Washington do the bidding of wealthy special interests, both domestic and foreign. That leaves out everyday Americans who are struggling but forgotten by politicians who are generally fully bought-and-paid-for. Everyday Americans can't afford to purchase politicians and many have considerable trouble feeding, clothing, sheltering and educating their children. Those everyday Americans recognize that Mr. Trump is unqualified to be President but millions of them believed the alternative -- Mrs. Clinton -- was even worse because they believe she is bought-and-paid-for by rich Americans and foreigners. The night before the election she was on stage with entertainers Jay-Z, Beyonce, Lady Gaga, Katy Perry, Bruce Springsteen, etc., all of whom are worth in excess of $300 million. She would have been much better served if she had appeared with everyday Americans who are worried about adequately feeding the one-in-five American children who go to bed hungry at night.
My first edition of Time this week not only flashed the above cover at me but inside -- published right before the election results -- Time's first major article was/is entitled "How the Media Got Smarter About Calling Elections" to praise the incredible accuracy of all the polls and all the media that assured all of us that Hillary Clinton would be the next President and that Donald Trump didn't stand a chance to get elected. Deeper inside this Time edition that was published the day of the election was the typical propaganda article by typical propagandist Joe Klein whose column was entitled: "Closing Argument: Why Hillary Clinton Is The Only Choice To Keep America Great." What Joe Klein meant, of course, was keeping America great for the rich but ignoring everyday Americans -- whites, blacks and browns -- who are trying so hard to care for their children, such as the one-in-five children who go to bed hungry at night in the richest nation in the history of the world. While the elite media's quest to keep Trump out of the White House back-fired, it may yet spawn continuing violence, and maybe a revolution, in a deeply divided America that is not so unlike the one that confronted President Abe Lincoln back in 1861 on the eve of the Civil War. 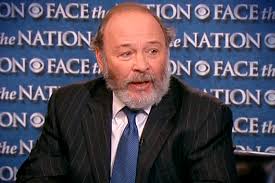 So thanks, Joe Klein, for nothing. 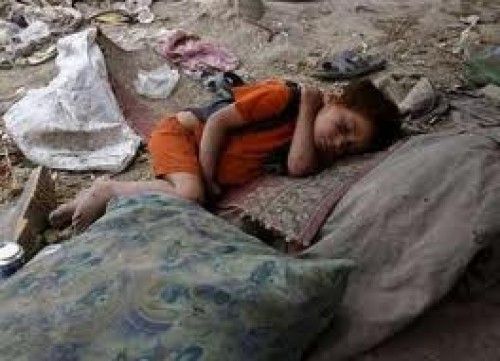 This child sleeps outside although it's hard to go to sleep on the ground when your stomach is hurting because you are hungry. There are 30,000 or so highly paid lobbyists in Washington paid by rich people...rich Americans and rich foreigners...to make sure that Congress and the White House do their bidding, unmindful of over 17 million American children who have hunger problems and millions more beset with other poverty-related ills. Many of those lobbyists are former members of Congress accustomed to selling pieces of the U. S. democracy to the highest bidder. Yes, Mr. Klein, Donald Trump is not qualified to be President of the United States but the voters who managed to squeeze him into the White House are not the "irredeemable basket of deplorables and stupid, uneducated whites who support Trump." Most of the Americans who voted for Mr. Trump, and most who didn't vote at all, were searching in desperation for a political system that didn't just care for the richest Americans but also had at least a modicum of concern for a child that has to try to sleep on the ground even though his or her stomach hurts from acute hunger.
And that's why Time Magazine and the rest of the elitist U. S. media has emerged as the weakest link in the United States democracy, even weaker than the 30,000 or so decrepit lobbyists in Washington. 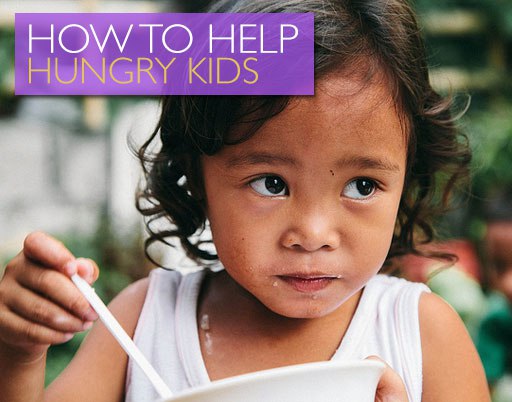 The media, lobbyists and politicians are this child's enemies.
The person who gave her this bowl of food is her friend.
{Even if that person voted for Donald Trump!} 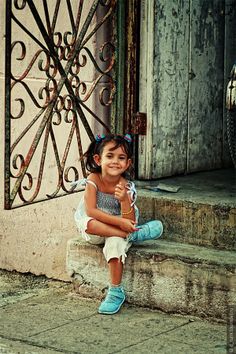 A family in Cuba cares for this happy little girl.
Her Cuban family doesn't deserve to be embargoed.
But pay Congressmen and you can embargo Cuba forever. 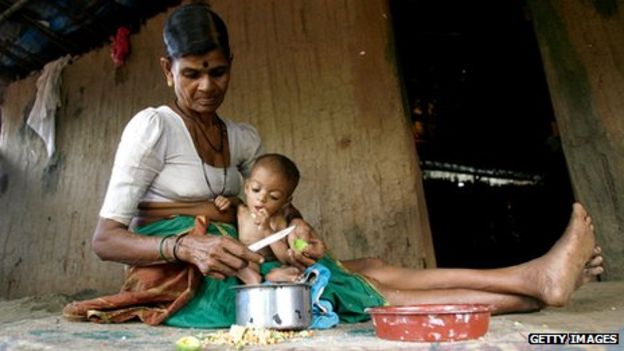 England's news agency, the BBC, used this photo to illustrate a report that said, "A child starves to death every 10 seconds in a world in which an elitist minority stays flush with enormous wealth." Meanwhile, the U. S. media is absorbed with rich celebrities and political propagandists-pundits as opposed to hiring and cultivating print reporters and broadcast journalists. And that's precisely why Americans don't understand how Mr. Trump got elected President or why the BBC -- which does have decent print reporters and unbiased broadcast journalists -- makes such statements as the one inside the quotation marks above. The grandmother shown here is cutting up wild plants or weeds to feed her grand-daughter. The child's mother had starved to death while using the last bit of her food to keep the precious little child alive.