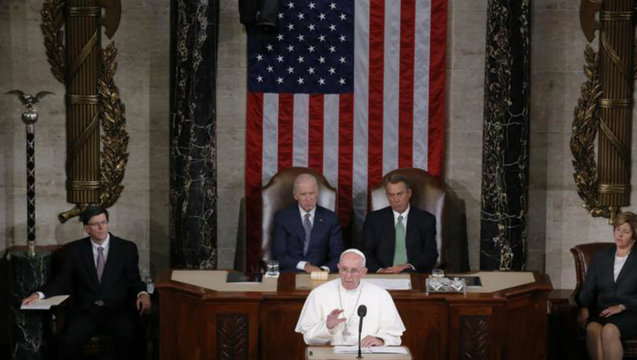 Today -- Friday, September 25th -- Pope Francis made history by speaking to the largest gathering of world leaders, 170 of them including Cuba's Raul Castro, at the United Nations in New York. The day before he made history in Washington by speaking {AP photo above} before a joint session of the U. S. Congress. Pope Francis, behind the scenes, was the key instigator in encouraging Presidents Barack Obama and Raul Castro to begin the process of normalizing the long-abnormal U.S.-Cuban relations. Even after leaving the island for the U. S., Cuba remains very much on the Pope's mind. In the above address to Congress, he devoted a key paragraph to Cuba, saying, in part: "I would like to recognize the effects made in recent months to help overcome historic differences linked to painful episodes of the past...This has required, and requires, courage and daring, which is not the same as irresponsibility." RESPONSIBLE WORDS!! 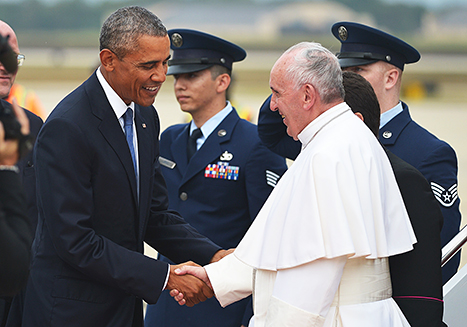 Within moments after welcoming Pope Francis to the United States this week, President Obama thanked him for brokering the detente with Cuba. According to voanews.com {Voice of America}, President Obama told Pope Francis: "Holy Father, thank you for your valuable support in our new beginning with the Cuban people, which gives us hope for better relations between our countries, greater cooperation in the hemisphere, and a better life for the Cuban people." Indeed, the convergence of two great men created the "new beginning." Pope Francis visited the island this month; President Obama likely will visit in 2016. 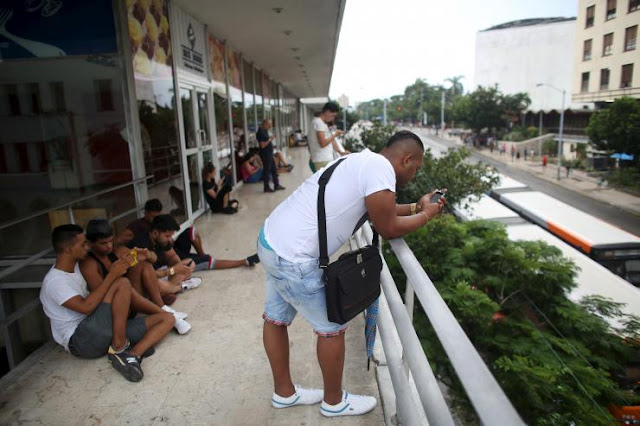 This week, especially after Pope Francis left the island for his trip to the United States, young Cubans in Havana continued to envision a brighter future with their rejuvenated aspirations buoyed sharply by their government's positive reactions to changes proffered by two important men they respect -- President Barack Obama and Pope Francis. This Reuters/Alexandre Meneghini photo shows young adult Cubans absorbed with some new toys -- Smart Phones. Since July, thanks to overtures inspired by the U. S. President and the Pope, the Cuban government has opened 35 Wi-Fi outlets, with more on the way. 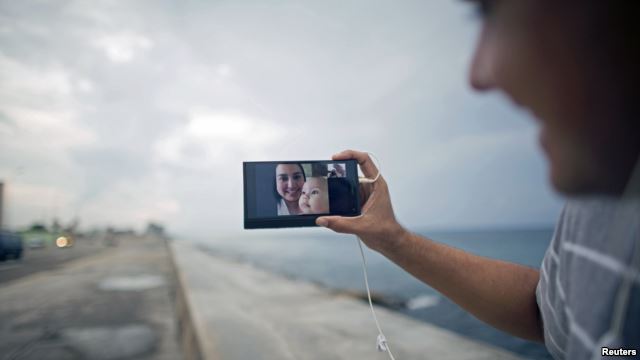 This photo shows Daniel Llerandis, a 31-year-old artist working in Havana. He is talking to and viewing his wife and 6-month-old daughter in Miami. Havana-Miami separations are now more palatable. 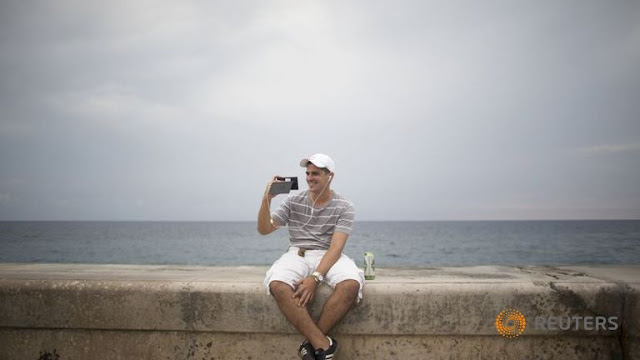 Daniel enjoying his wife and baby in Miami while sitting on the Malecon seawall. 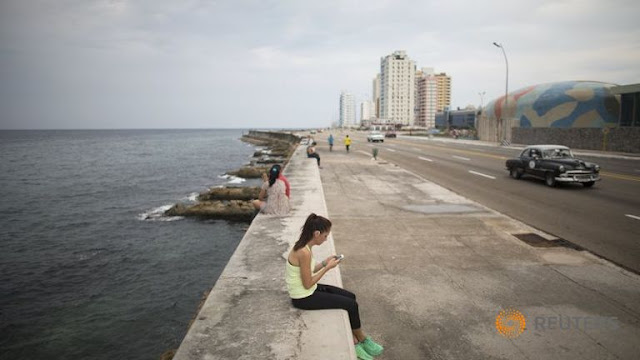 This Reuters photo was taken this week, September 22nd, by Alexandre Meneghini. The young lady sitting on the famed Malecon seawall is Yasemin Lawson from Washington. She is an American taking advantage of the famed medical education Cuba provides her free of charge at its famed and welcoming Latin American School of Medicine. Ms. Lawson, while in Havana, now has easier and cheaper access to telecommunication services as well as daily connections to her relatives and friends in the United States. 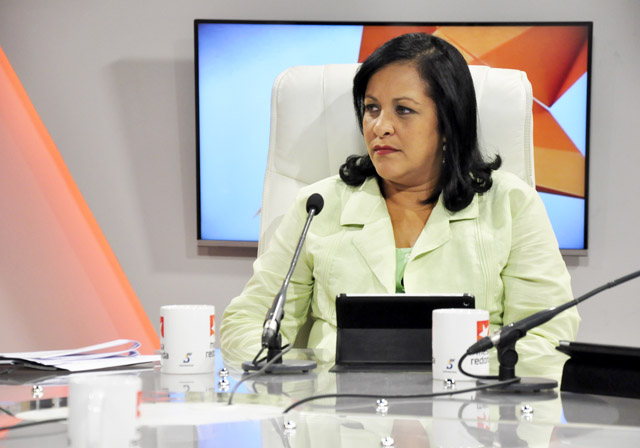 Mayra Arevich Marin is the President of ETECSA, which puts her in charge of Cuba's telecommunication advances. In the above photo she is on Cuba's Round Table television program explaining the Wi-Fi outlets she is opening around the island. "We have opened 35 Wi-Fi outlets now," she said. "and that's just a start." Partly because of the decades-old U. S. embargo against Cuba, the island still has one of the world's lowest internet penetrations. That is changing because of the positive effects of President Barack Obama's executive decisions that have chipped away at the pernicious embargo, which has stifled Cuba's economy since 1962. Cuba has only one underground fiber optic cable and it extends from Venezuela. But President Obama has dispatched the State Department's Daniel Sepulveda to Havana to talk with Mayra about an underground cable from Miami to Havana. She is very receptive: "Our people on this beautiful island, especially our young people, deserve what the modern world has to offer. If we are not restricted by outside forces, we in the Cuban government will do all in our power to make that happen." 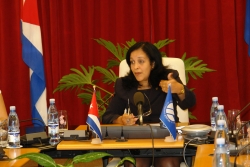 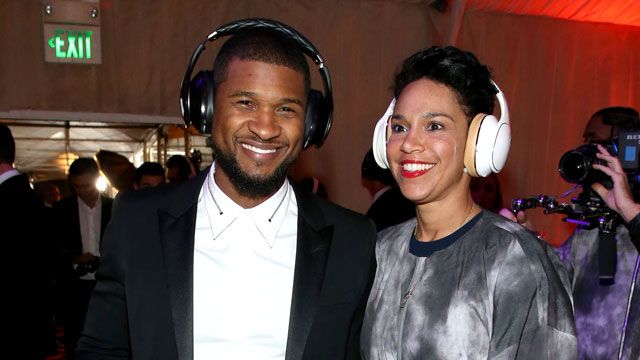 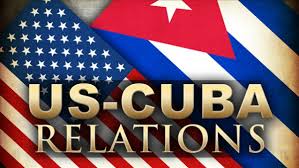 Thanks to some good and audacious people...such as President Obama and Pope Francis...U.S.-Cuba Relations have improved drastically in recent months. To be sure, there are some not-so-good people who are working hard to roll back those gains, but the momentum is already benefiting Cubans like Daniel Llerandis and Americans like Yasemin Lawson. Daniel is the Cuban in the photo above using his Smart Phone to talk to his wife and little girl in Miami. Yasemin is the American medical student in Havana in the photo above using her Smart Phone as she sits on the Malecon seawall. Peaceful and sane relations are always preferable to unfriendly and greedy relations.