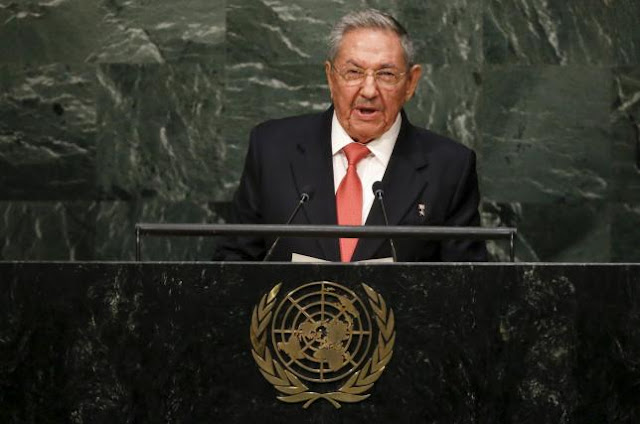 On Saturday, September 26th, Cuban President Raul Castro made his first speech at the United Nations in New York. {Photo courtesy: Reuters/Carlo Allegri}. The U. S. embargo against Cuba dominated his speech and the thoughts of the appreciative audience. President Castro hailed President Obama's efforts at trying to normalize relations between the two nations, calling it "major progress." Then he slammed the embargo, which Cuba calls a blockade, with words such as these: "The blockade is the main obstacle to our country's economic development, while affecting other nations due to its extra-international scope, and hurting the interests of American citizens and companies. Such a policy is rejected by 188 of 190 UN member states that seek its removal." Every year since 1982 the UN has denounced the embargo in near unanimity. Last October the vote was 188-to-2 with only Israel supporting the U. S. policy, a truly amazing statistic considering that the U. S. is by far the most influential economic and military power in the world, and considering the fact that many United Nations members are very close friends of the United States. 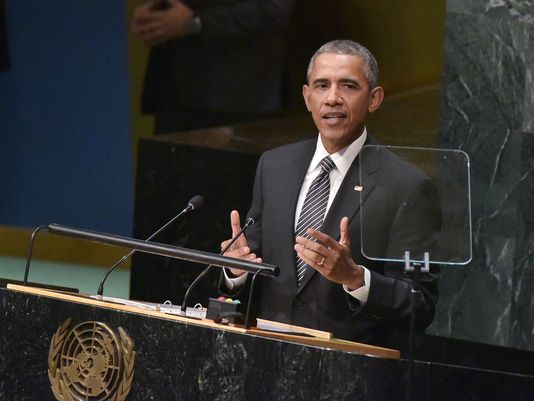 U. S. President Barack Obama also spoke at the UN Saturday, September 27th. {Photo courtesy: Mandel Rgan/AFP/Getty Images}. His main theme was to call for "the eradication of poverty." Echoing the admonitions of Pope Francis on his trips last week to both Cuba and the United States, President Obama in the above speech pleaded with the leaders of other nations to help him, and the Pope, to try to curb the vast and growing disparity between the rich and the poor. Also, President Obama obviously was influenced by President Raul Castro's earlier UN speech calling for an end to the embargo. After President Obama's address to the UN Saturday, the White House confirmed that Mr. Obama and Mr. Castro will have a private meeting at the UN tomorrow -- Tuesday, September 29th. The meeting apparently was requested by President Obama. The 170 or so world leaders congregated at the UN are being informed that the U. S. will "abstain" from supporting its own embargo against Cuba when the UN votes on the issue next month. Such an abstention would reflect Obama's embarrassment and send a rebuke to the obstinate U. S. Congress. 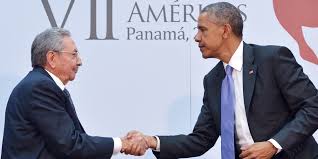 Back in April at the Summit of the Americas in Panama, the two Presidents not only had this friendly handshake but also engaged in a private meeting. Since then they have talked on the telephone, including last week when Mr. Obama phoned Mr. Castro -- just prior to the arrival of Pope Francis in Cuba -- to tell the Cuban leader of further executive orders aimed at normalizing relations between their two countries. 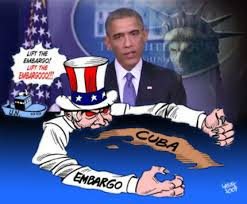 Barack Obama has been President of the United States for almost seven years now. During all that time he has been grossly embarrassed by the U. S. embargo of Cuba -- mandated by and maintained by revengeful right-wingers in the U. S. Congress that, unlike Mr. Obama, could care less about how much the embargo harms everyday Cubans and everyday Americans, not to mention the dastardly hurtful image of America and Democracy that it presents to the entire world. Inspired by Pope Francis, Mr. Obama has worked tirelessly in the past two years to normalize relations with Cuba and the fruition has resulted in many advances, including the opening of embassies in Havana and Washington for the first time since 1961. But only the U. S. Congress can officially end the embargo and it is quite apparent that the congressional Republican right-wingers will not do that, again reminding the world, including the Pope and all of America's best friends around the world, that the U. S. democracy is no longer strong enough to deal sanely with a handful of thuggish right-wingers who are unconcerned with true democratic principles. 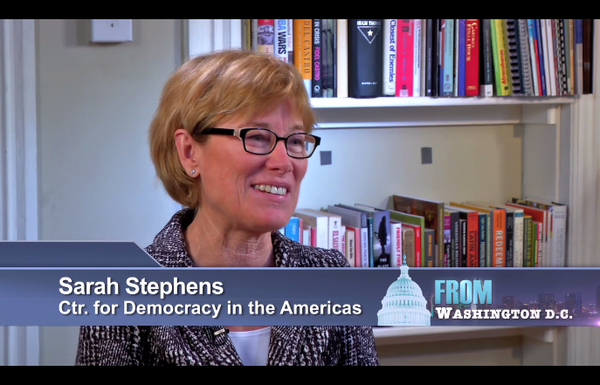 Sarah Stephens is one of America's greatest experts on U.S.-Cuban relations. She is also the founder and leader of the Washington-based Center for Democracy in the Americas. Ms. Stephens believes there is a chance that immense pressure will soon persuade the U. S. Congress to end the embargo against Cuba. In her last CDA "Cuba Central" posting, Ms. Stephens wrote: "The cat has scampered out of the bag. The U. S. policy transition to a post-embargo world is underway, and the forces to make the new policy irreversible are getting stronger." The forces she alludes to are world opinion, the Pope, the Presidents of the U. S. and Cuba, and the strong desire of American businesses and ports to engage in free commerce with Cuba. Normally I believe in and adhere to every word Ms. Stephens emits regarding Cuba. But not this time. I regretfully disagree with the 32 words in her above quotation. I believe, when it comes to Cuba, the cat is still in the bag and the U. S. democracy is incapable of letting it have the freedom to scamper out. 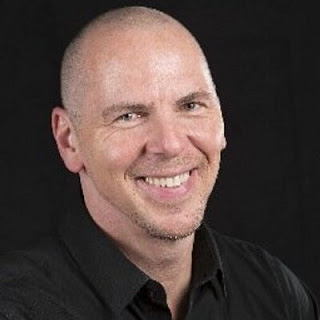 Jeffrey Koterba is the exception to the rule when it comes to the sorry state of mainstream journalism in the U. S. Mr. Koterba since 1989 has been America's best political cartoonist. His gems originate in the Omaha World Herald and are distributed by King Features Syndicate to well over 400 U. S. newspapers. 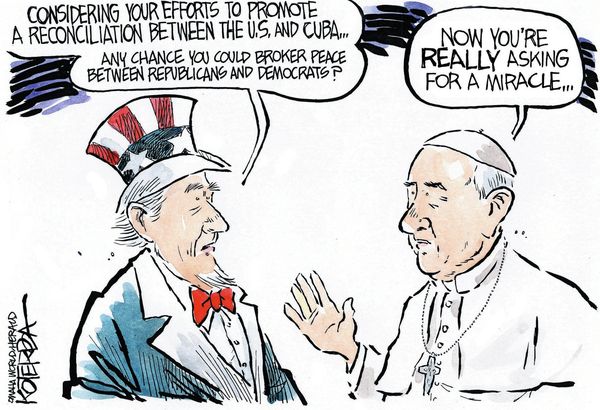 This week Jeffrey Koterba's gem reminded Americans that their two-party political system is no longer the functional democracy that was so majestically crafted by the Founding Fathers in 1776. The U. S. Congress is so out-of-touch with most Americans that its approval rating is in the single digits, yet Americans are helpless to ameliorate the problem. Too many of the 535 members of Congress are right-wing incumbents from specific areas and those miscreants can make or influence legislation that adversely affects the majority of Americans who have no input when it comes to voting such miscreants out of office. Therefore a handful of revengeful Cuban-Americans in Miami aligned with a handful of self-serving politicians -- Jesse Helms, Dan Burton, Robert Torricelli, the Bush dynasty, etc. -- can dictate a Cuban policy that the vast majority of the world's citizens stringently oppose. One of those majority citizens is Pope Francis and another is President Obama. As much {or more} than anything else, America's Cuban policy reminds the world that the U. S. democracy has been usurped and this generation of Americans seems unwilling or incapable of doing anything about it. Jeffrey Koterba, with the above gem, is reminding us that Pope Francis engineered a miracle when he inspired Presidents Obama and Castro to normalize relations between the two neighboring nations. But Jeffrey Koterba also reminds us that not even Pope Francis can inspire Americans to do something about their incredibly dysfunctional U. S. Congress. 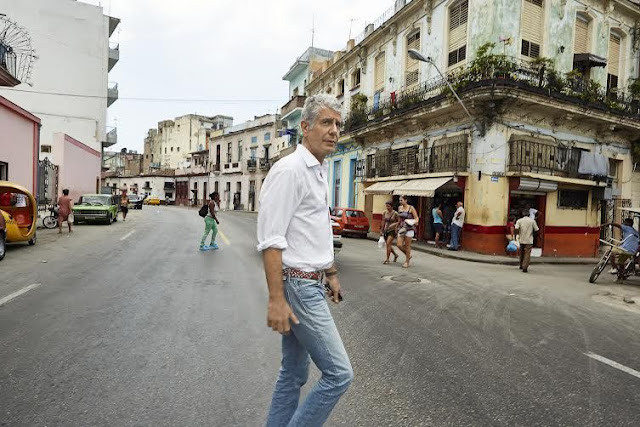 Sunday night, September 27th, CNN premiered the latest "Parts Unknown" documentary hosted by Anthony Bourdain. This one found him in Cuba {Photo courtesy: CNN}. Bourdain's adventurous travels are very popular and if you missed the premier showing from Cuba it will be replayed or you can view it online. It's worth your time and effort. Bourdain spent most of his time with everyday Cubans but also was shown around Havana by a Cuban-American businessman who divides his time between Havana and Miami. Also, Bourdain and his viewers got much insight about Cuba from famed journalist/author Jon Lee Anderson who has lived on the island. Unlike most U. S. journalists or broadcasters when it relates to Cuba, Bourdain is not intimidated by pressure or biased by politically correct protocol. The audacious Bourdain unleashed a myriad of quips from Cuba, including, "Cuba's been sitting here for what, 55 years, basically giving the biggest superpower in the world the stiff middle finger." Bourdain's program from Cuba is worth viewing because he allows everyday Cubans on the island, not provocateurs off the island, to portray the island. 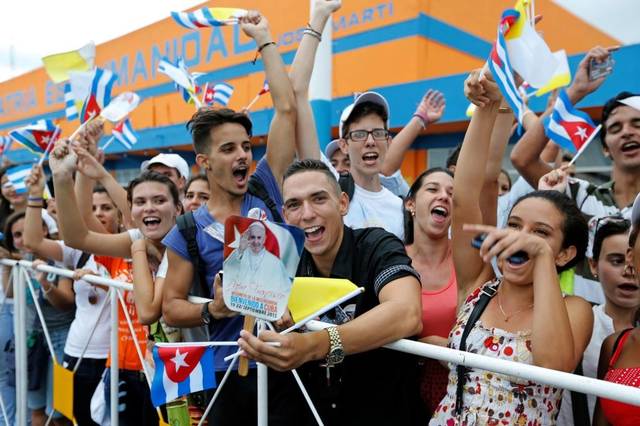 This photo shows a group of young Cubans enthusiastically welcoming Pope Francis to their island last week. Young Cubans like these were described by the aforementioned Anthony Bourdain as "among the most literate, the best educated people in the world." They also crave sovereignty. Left to their own devices, young Cubans like these will chart the post-Castro transition on the island. The U. S. Congress...to the chagrin of President Obama, Pope Francis, and the vast majority of democracy-lovers worldwide...believes that it, not these young Cubans, should dictate Cuba's future just as it has dictated Cuba's past for over five decades. How that dichotomy evolves will mean a lot to Cuba, America, and the world. In a fast-changing and newly reconfigured world, foreign nations should not dictate obscenities to weaker nations. In the views of most nations of the world, that is what the U. S. is doing in regards to Cuba. The extremists in the U. S. Congress will deny that fact, just as they deny the 188-to-2 vote in the UN.