Cuba Is A BIG Island

And A BIG Player On The World Stage 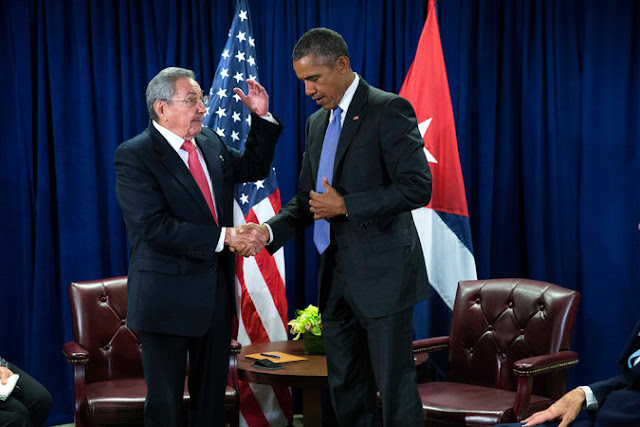 It's becoming a habit. Like old...or at least new...friends, Cuban President Raul Castro and U. S. President Barack Obama had another friendly, private meeting Tuesday -- September 29th -- at the United Nations in New York. The photo above is courtesy of Doug Mills/New York Times. When this photo was snapped, Castro is telling Obama he is surprised "How tall you are," flummoxing Obama for a moment. 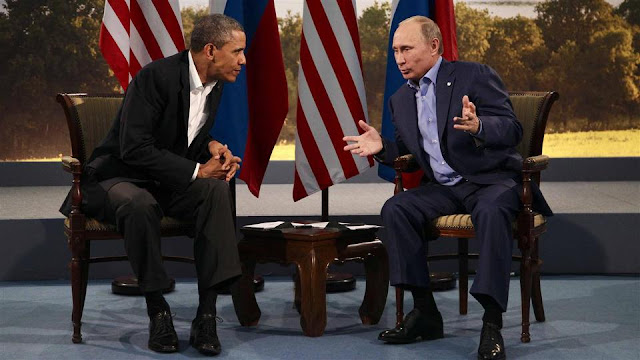 In the last week of September, 2015, this and similar photos flashed around the world many times, and rightly so considering the dangers to humanity around the world. In recent days almost all of the world leaders -- from the Pope to Vladimir Putin to Raul Castro -- have converged on U. S. soil, especially the United Nations in New York. Among the vital issues discussed in UN speeches and in private meetings by American President Obama and Russian President Putin are cataclysmic military operations in nations such as Ukraine and Syria as well as the contaminant international threats from militarily powerful terrorist groups. The situation is becoming more and more reminiscent of World War II when great leaders -- Roosevelt in the U. S. and Churchill in England -- made the crucial decision to align with the Soviet Union's cruel dictator, Stalin, to save the world from the dire threat represented by the German-Japan-Italian alliance. The Soviet Union collapsed economically because of the post-World War II Cold War, but Russia remains a gigantic military nuclear power, one that President Obama may have to align with to confront what may be an even more dire threat than Hitler to Western civilization. In that milieu, President Obama had his hands and mind full of Putin and Russia this week, not to mention the 21-gun salute and the massively flattering White House dinner showered on Communist China's President Zi. But still President Obama took time to pay homage to Cuba, including in his major speech September 28th at the UN and in a private meeting at the UN with Cuban President Castro. Yes, Cuba is the largest island in the Caribbean, right next door to the U. S. But it is still just an island with a very small economy and a very weak military. So why in a big, wide, eclectic, and troubled world is Cuba such a big player on the international stage? The answer is a fait accompli that proselytized Americans are not supposed to have either the courage or the intelligence to consider, resembling a Batista/Mafia-style Banana Republic where overwhelmed citizens are told how, when and what to think. 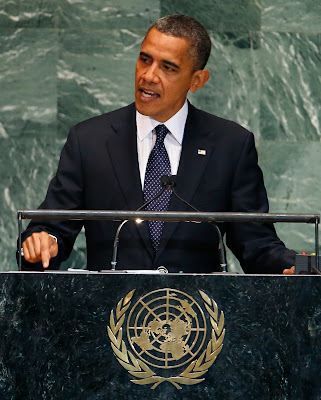 During his speech at the UN Monday, September 28th, President Obama had a lot on his plate -- Russia, China, Iran, powerful terrorist groups, etc. -- but he did not neglect Cuba as he tried to assure the world that his efforts to normalize relations with the nearby island is one of the good things the U. S. is trying to accomplish. He let the world know that the U. S. and Cuba have opened embassies in Havana and Washington for the first time since 1961, as the world has urged the U. S. to do. He also let the world know that he is trying to further appease the world by ending the embargo against Cuba that has hurt Cubans since 1962 and severely harmed the U. S. image around the world. In the above speech Monday, President Obama said: "I'm sure Congress will inevitably lift an embargo which should no longer be there." The whole world agrees with that sentiment but a handful of revengeful Miami members of the U. S. Congress, along with a handful of easily acquired sycophants, can continue to dictate America's Cuban policy, and President Obama, deep into his second term as President, probably knows that but just didn't want to share it. 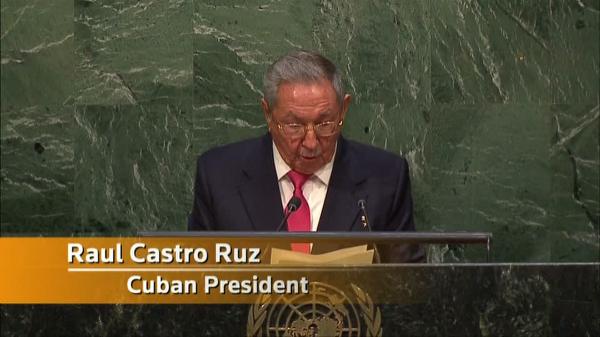 Cuban President Raul Castro this week made his first two speeches at the United Nations. He richly praised President Obama for the "positive progress" he has "bravely constructed" to improve U.S.-Cuban relations. But Raul Castro has also used the UN to point out "an apparently engraved" weakness in the U. S. democracy that permits "a few" to establish "legal legislation" that harms most Cubans, most Americans, most Cuban-Americans, and most citizens of the world because of America's "intra-international" role. 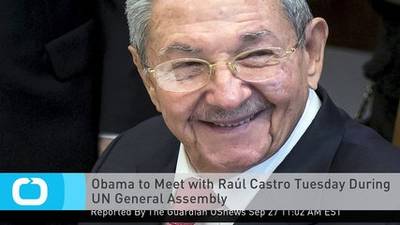 This week at the UN President Obama requested and got yet another private meeting with Raul Castro. They had astonished the world by simply greeting each other at the Mandela Memorial in South Africa and then Obama followed that up by having very friendly public and private meetings with Raul Castro at the Summit of the Americas in Panana in April. Prior to Pope Francis' visits to Cuba and the U. S. this month, Obama telephoned Castro to let him know he was continuing to use his executive authority to chip away at the Congress-mandated embargo. For decades Raul Castro has often been simply labeled "Fidel's little brother" although since the 1950s they both have been larger-than-life revolutionary figures. Fidel is now 89-years-old and still recovering from an intestinal illness that almost killed him in July of 2006. The 84-year-old Raul has been Cuba's President since 2008 when Fidel realized he would never again be physically able to fulfill the job. Since then, Raul has not only worked with President Obama in trying to improve U.S.-Cuban relations, he has sought to inject Vietnamese/Chinese-style capitalism into an entrepreneur-focused Cuban economy. But his relationship with President Obama in recent months has done more than anything else to elevate the images of himself, the island, and the Cuban Revolution. 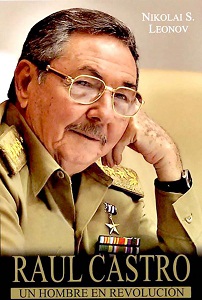 In fact, one of the hot items at the United Nations in New York this week has been a new biography entitled: "RAUL CASTRO: A Man In Revolution." At age 84 the "little brother" is portrayed as a "big hombre." 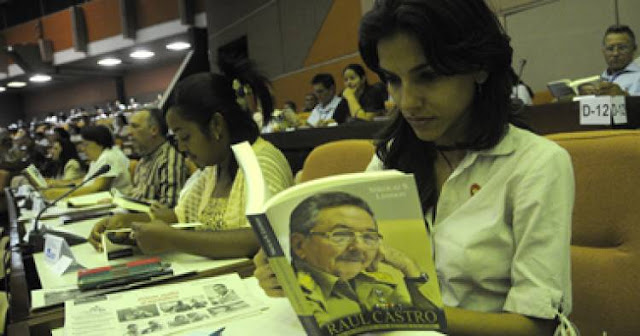 At recent international forums, including the United Nations this week, it seems that a lot of inquisitive people are interested in reading about how Raul Castro has emerged on the world stage. 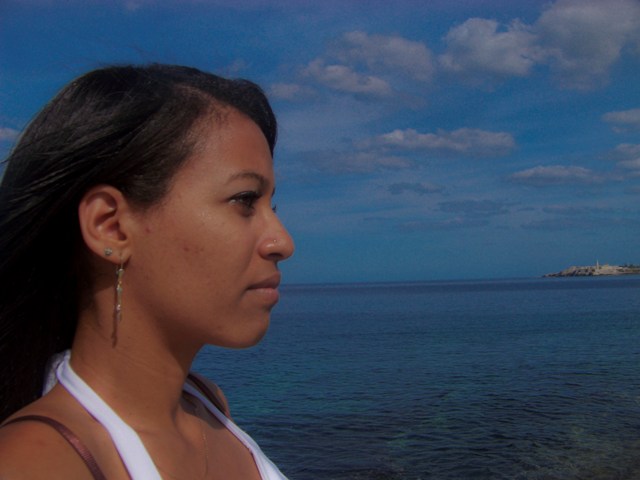 But having said all that, this is the profile of Cuba that is far more important than all others when it comes to Cuba's future, and that includes the ubiquitous profiles of the Castro brothers, President Obama, and Pope Francis. The profile above is gazing in wonderment out from Havana's famed Malecon seawall. She is wondering if, during her lifetime, Cubans on the island -- not in Miami and Washington -- will chart the course that her life will take. She knows what Batista, the Mafia, and U. S. businessmen did to the island in the 1950s; she knows the defensive posture Revolutionary Cuba has been forced to take since 1959. She knows that a few revengeful but now ultra-powerful Cuban-Americans can still punish innocent Cubans in the mostly unchallenged guise of hurting the sufficiently vilified Castro brothers, such as the wildly euphoric and unchallenged shouts in the Miami media -- "It's the biggest blow yet against Castro!" -- when the most celebrated and most protected Cuban-exile terrorists bombed the child-laden Cubana Flight 455 into the ocean on October 6, 1976. The profile above wonders if this current generation of Americans still considers Cubana Flight 455 "the biggest blow yet against Castro." And most of all, the profile above gazes across the Florida Straits and wonders whether a handful of benefactors in Miami will forever over-rule the majority of Americans and Cuban-Americans in setting a U. S. Cuban policy that the rest of the world, as epitomized by the unanimity in the United Nations, considers beneath the principles of a great democracy. The profile above has had a lifetime of foreign greed, revenge, and imperialism. She now wants a chance to have real input in her future, and her children's future. And she deserves that chance, over and above the dictates of a vicious minority in a dysfunctional U. S. Congress that she doesn't understand.
Causation: 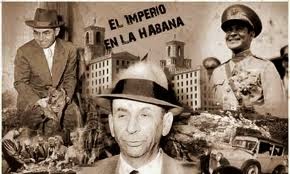 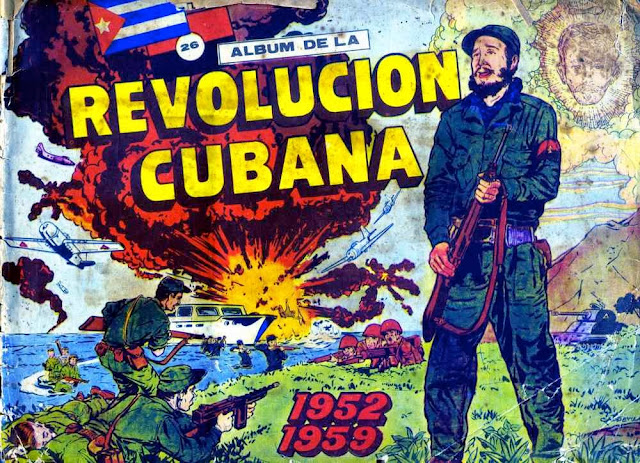 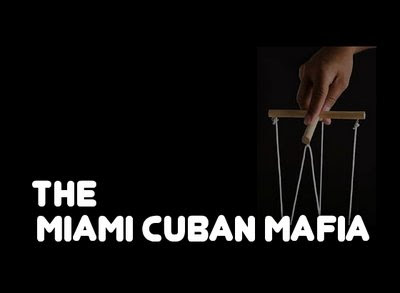 which caused havoc like this.
Americans who do not factor the fate as well as the aftermath of events such as Cubana Flight 455 into the U.S.-Cuban equation are totally disregarding why Cuba is a BIG island on the international stage. No, Cubana Flight 455 was not "the biggest blow yet against Castro," the mantra that pusillanimously unpatriotic Americans were told to accept. {"We, NOT CASTRO, are the good guys!"}. Cubana Flight 455 could better be depicted as "the biggest boost" of the Castro brothers and their revolution, which got its original "big boost" from the excessive greed and obsessive brutality of the U.S.-backed Batista-Mafia dictatorship. To critique the Cuban Revolution, start by critiquing the above graphic. Either it was one of "the biggest blows" against Castro or it was one of "the biggest boosts" for Castro. Study its cause and its perpetrators, and the high-profile politicians -- including current presidential contenders -- who have defended it and them. Then factor it into such phenomenons as the longevity of the Cuban Revolution and why Cuba today is a BIG island. It takes many intricate pieces to make a challenging puzzle. And Cuba is a challenging puzzle with many intricate pieces, many of which are supposed to be unknown so as to make the vast Castro industry in the United States more and more lucrative and powerful, lucrative enough to make you a rich hombre in Miami and, maybe, a big hombre in the White House.