President Is Now Secretary of Cuba!!! 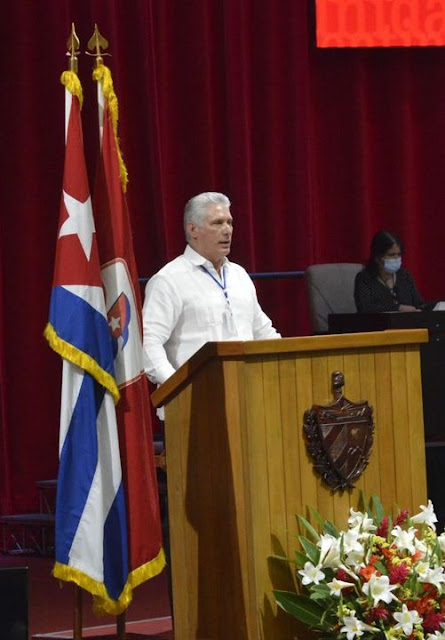 Today -- April 19th, 2021 -- Miguel Diaz-Canel, the President of Cuba since April of 2018, is shown above accepting his new role as the Secretary of the ruling Communist Party. As Secretary he replaces Raul Castro, who is retiring from his last official position in the Revolutionary government. Raul Castro turns 90-years-old in June and he appeared healthy and vigorous during his speeches this week during the Congress that named Miguel Diaz-Canel as his successor. Raul Castro's brother Fidel died at age 90 in 2016. Thus, as of today, there is now -- for the first time since JANUARY 1st OF 1959 -- no one named Castro at the head of the Cuban government!!! 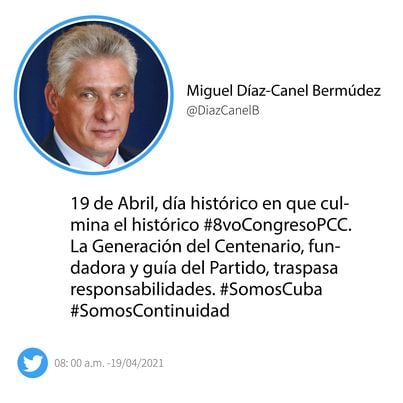 As both the President and Secretary of Cuba, Miguel Diaz-Canel starting today, has total control of the island's top political apparatuses. He was born on April 20, 1960, in the city of Santa Clara. Therefore, he was born after the triumph of the Cuban Revolution that ousted the U.S.-backed and Mafia-backed Batista dictatorship on January 1, 1959. As President of Cuba since 2018 and now as Secretary as of  TODAY {April 19th, 2021}, the task for Miguel Diaz-Canel is daunting. The continuing {since 1962} and excruciatingly genocidal U. S. Embargo/Blockade is now coupled with a devastating COVID-19 pandemic. One thing that will continue to work in Miguel Diaz-Canel's favor is the basic fact that he is well respected and loved by a strong majority of Cuba's 11.2 million people; and they know him very well, starting during his time as the island's very successful Minister of Education.
Having been born on April 20th, 1960, Miguel Diaz-Canel's 61st BIRTHDAY is tomorrow!!! 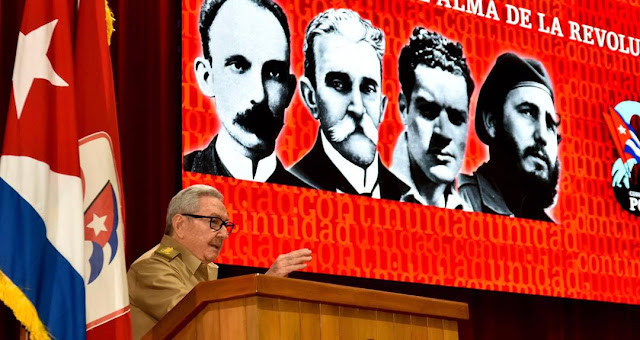 As he presided over Cuba's 8th Congress this week Raul Castro appeared strong with a vibrant voice. He turns 90 on June 3rd, 2021. He chose today -- April 19th, 2021 -- as the day he announced his retirement official. It is presumed that he chose April 19th because on April 19, 1961, Revolutionary Cuba registered a scathing victory at the Bay of Pigs, thwarting an air-land-and-sea attack from the United States and by Cuban exiles trained at Fort Benning, Georgia, and in Nicaragua, which was led then by the U.S.-backed Somoza dictatorship. 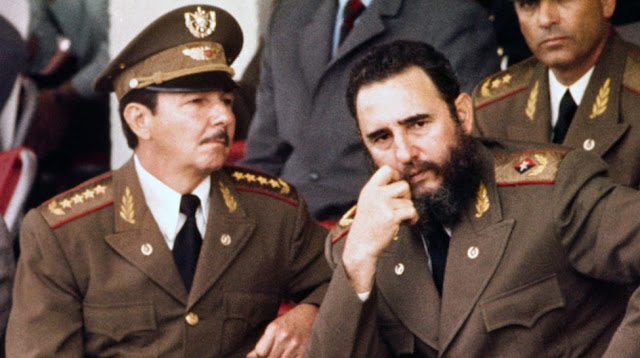 During Cuba's Revolutionary War {1953-1959} and afterward in Revolutionary Cuba, Raul Castro was always at his more famous brother's side, right until the day Fidel died at age 90 on November 25th, 2016. Since then, Raul has made sure that Fidel remains the historic leader of the Cuban Revolution. And now, after Raul's retirement today, his successor Miguel Diaz-Canel will be expected to do the same. 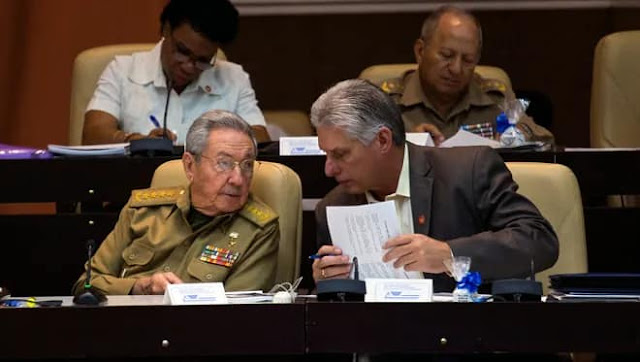 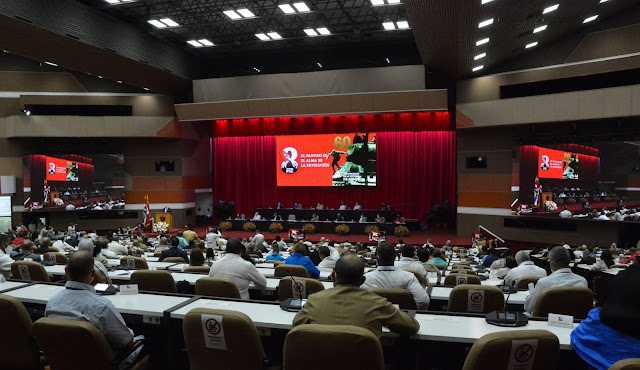 This is a definitive photo taken today -- April 19th, 2021 -- at the 8th Congress in Havana. It show the delegates watching a huge graphic of Fidel Castro leaping from a tank to lead the front-line defense of his Cuban Revolution at the Bay of Pigs in April of 1961. The sensational Cuban victory at the Bay of Pigs was crowned on April 19th, 1961...exactly 60 years ago today. The Bay of Pigs for the ages also has crowned Fidel Castro's historical legacy as the forever leader of Revolutionary Cuba, at least until or IF the U. S., namely Little Havana in Miami, regains control of Cuba. 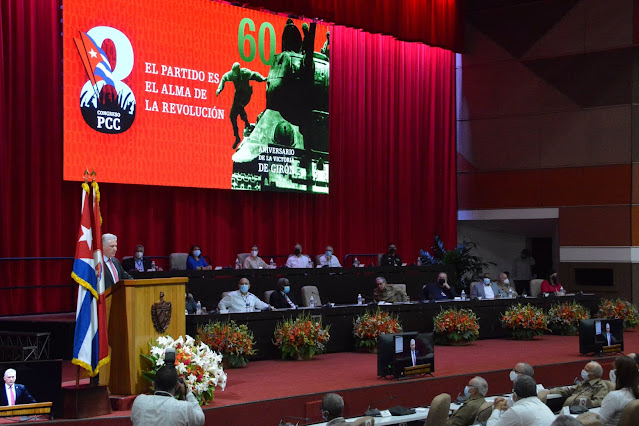 The emphasis today of the image of Fidel Castro's leap onto the frontlines at the Bay of Pigs is a reminder that it, FOR ALL TIMES as far as Cuba is concerned, merely confirms that Fidel Castro will always be the leader of Revolutionary Cuba. Contrary to what is reported in Miami and Washington to this day, the majority of today's 11.2 million Cubans on the island agree with that depiction. 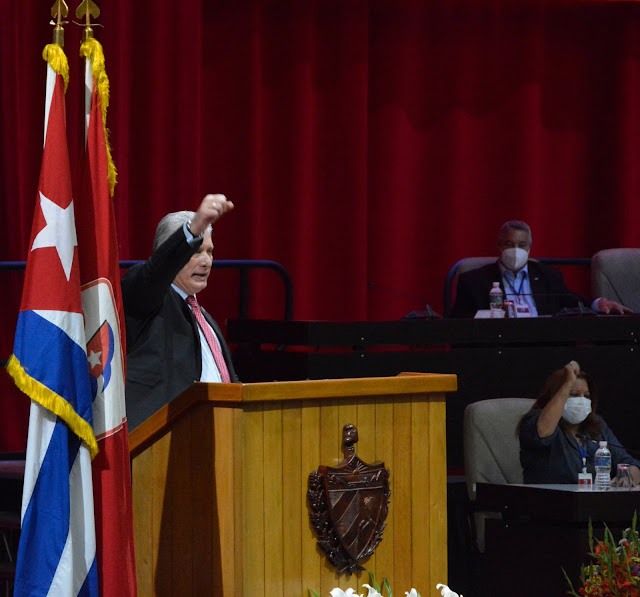 This is the new absolute, undisputed non-Castro leader of Cuba, Miguel Diaz-Canel, saluting with balled fist today -- April 19th, 2021 -- as he stares as the image of Fidel Castro leaping from that tank 60 YEARS AGO at the historic Bay of Pigs frontlines. Yes, as far as Miguel Diaz-Canel is concerned, Revolutionary Cuba will always be Fidel Castro's Cuba. And that is the significance of today's important developments in Cuba today!! 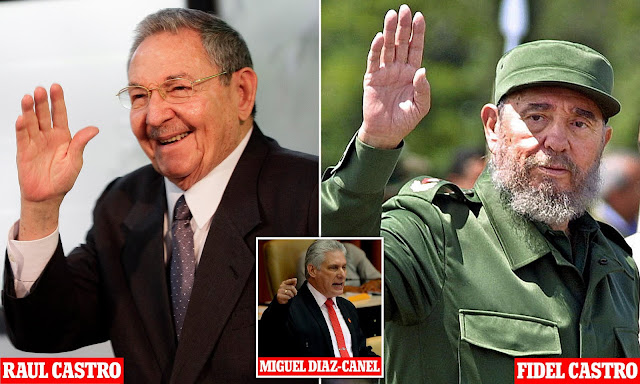 I think you are correct, Armando. But I will study that situation before I comment about it.