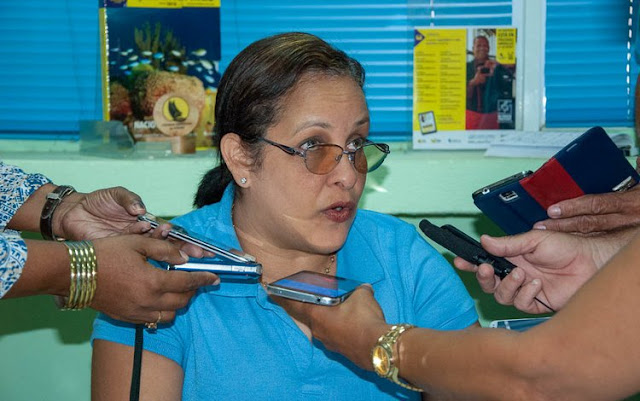 A big announcement from Mayra Arevich in Havana. Mayra is the President of ETECSA, Cuba's Telecommunication Company. Starting this week -- on 12-05-2018 -- Mayra says Cubans across the island can begin receiving full internet access on mobile phones. There are now more than 800 WiFi sites in Cuba and Mayra said Cuba began seriously modernizing internet access in 2014 when U. S. President Barack Obama seriously began normalizing relations with Cuba. "I regret Mr. Obama is no longer America's president but I also want what is best for all Cubans. So we move along," Mayra said. 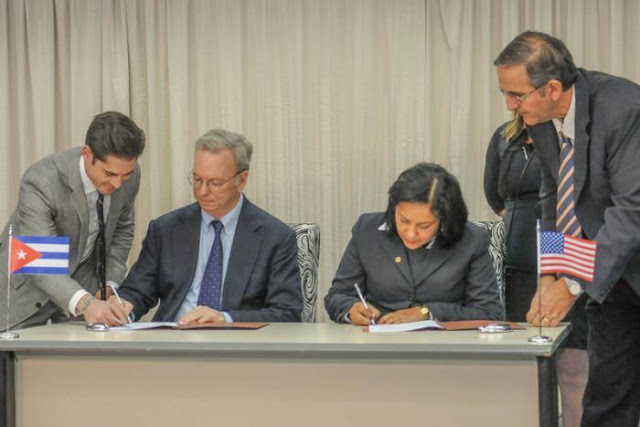 Cuba's desire to modernize its internet service has been slowed by the current Trump administration in Washington but it has a key ally in the internet giant Google. The photo above shows Mayra Arevich, the boss at ETECSA, signing an important deal with Eric Schmidt, the boss at Google. With an office in Havana, Google installed servers that drastically improved connectivity speeds in Cuba. "I am proud of Google," Mayra said, "and I hope Mr. Schmidt is proud of Cuba." 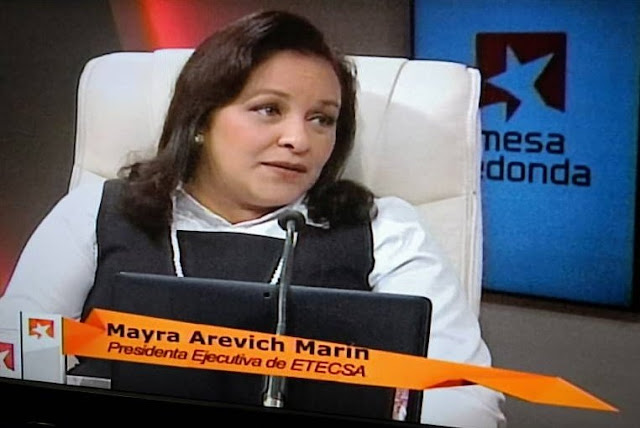 As Cuba's telecommunication boss, Mayra Arevich was asked how many internet sites, starting now, will be blocked out in Cuba on mobile phones. She replied, "Almost none, fewer than in most countries I assure you. We want Cubans to have access to a wide range of information and communication." What about Radio-TV Marti in Miami? "Of course," she replied, "that will be blocked. We would be foolish to facilitate a well-funded propaganda source located in a foreign country whose only purpose is to destroy us and, failing that, to demean us. We do not deserve to be demeaned or lied to by Cubans or anyone else off the island." 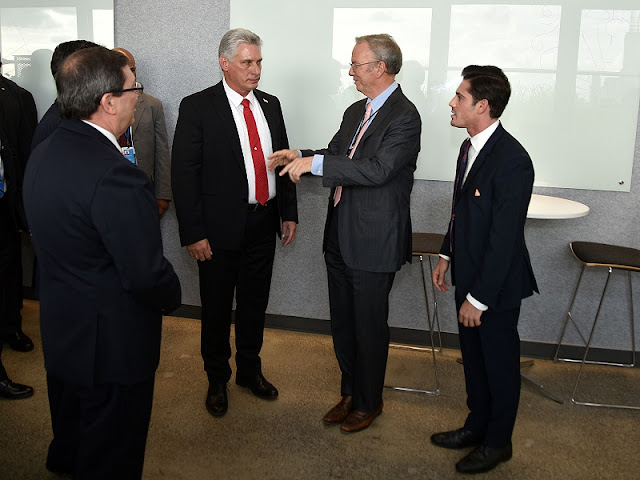 The photo above was taken in New York City on Sept. 25-2018 when Cuba's new President Miguel Diaz-Canel was hosted at Google headquarters by Google's top boss Eric Schmidt. One by one Mr. Schmidt introduced Diaz-Canel to dozens of other American business executives. A strong majority of American business executives, such as Mr. Schmidt, favor doing business with Cuba...as do a strong majority of Cuban-Americans in the United States of America. 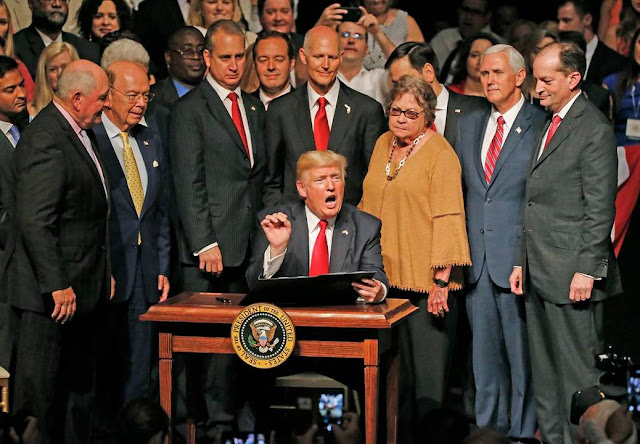 But the United States of America has only a two-party political system -- Republicans and Democrats. And since the 1950s all six Republican administrations in Washington have been tightly aligned with the Batistiano-Mafiosi faction that raped-robbed-and-brutalized Cuba at will from 1952 till Jan. 1-1959, after which the Batistiano-Mafiosi leaders fled the Cuban Revolution to resurrect their new capital of Little Havana in Miami, Florida. And since Jan. 1-1959 -- hiding behind the skirts of the Republican Party and a bit of Miami-related terrorism -- the Counter Revolutionary Cubans have dominated both the U. S. Congress and Republican White Houses. The photo above is a prime example. After Democratic President Barack Obama bravely and decently tried to normalize relations with Cuba, incoming Republican President Donald Trump QUICKLY WENT TO LITTLE HAVANA and shamefully returned America's Cuban policies back over to the Counter Revolutionary Cuban extremists and their self-serving sycophants. And the point I make is this: Any American who is not shamed by the photo above is, IN MY OPINION, either a coward or an anti-American. 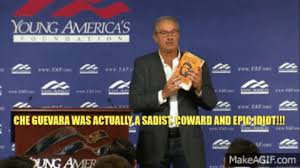 Since 1959 Cuban-born Counter Revolutionaries in the United States have lucratively dictated the Cuban narrative to the American people with the cooperation of an intimidated, incompetent, or politically correct mainstream United States media.

Incessantly since 1959 the United States media has enabled Counter Revolutionary Cuban extremists to paint Batista's Cuba as a Mother Teresa-like paradise while portraying Revolutionary Cuba as the most murderous hellhole in world history.

In 1959 remnants from the overthrown Batista dictatorship in Cuba easily had enough money and enough strong-arm tactics to totally dominate Miami's and Newark's political and economic structures...and that situation has exacerbated outwardly since then, especially to the hallowed halls of Washington. Now a second generation of well-off and ubiquitous Cuban-Americans, like Humberto Fontova, will use the mainstream United States media to tout the "virtues" of Batista's Cuba in stark contrast to the "debauchery" of Revolutionary Cuba.

The fact that the U. S. media lacks the courage to provide equal time to the majority of Cuban-Americans who favor decent interaction with Cuba is, I believe, more America's problem than Cuba's. America's Cuban policies have been condemned by the decency of President Obama and a 191-to-0 vote in the UN; America's Cuban policies dictate that Americans are the only people in the world without the total freedom to visit Cuba, lest they judge it for themselves; and Americans have been programmed not to object to the world's longest and cruelest economic embargo ever imposed by a powerful nation against a much weaker nation...even after de-classified U. S. documents revealed the ongoing purpose of the embargo was/is to starve, deprive, and make miserable the lives of everyday Cubans on the island to induce them to rise up and overthrow their government. Of course, the usually unchallenged rantings and ravings from the likes of Humberto Fontova never attempt to explain how and why Revolutionary Cuba has, somehow, managed to exist for all these many decades. {Could it possibly be that the answer is this: Rebels like Fidel Castro stayed on the island to fight while his enemies fled to safer havens elsewhere?}. 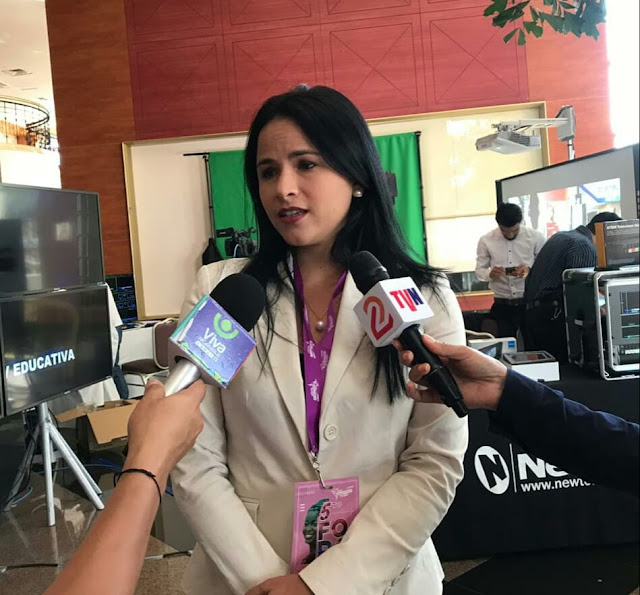 Meanwhile, Cuba's superstar television News Anchor Rosy Amaro Perez has spent this entire first week of December-2018 reporting back to the island from Nicaragua. {Apparently John Bolton's inclusion of Nicaragua in his anti-Cuban tirade in Miami was of interest to Rosy.} You may detect a worried look on Rosy's countenance. 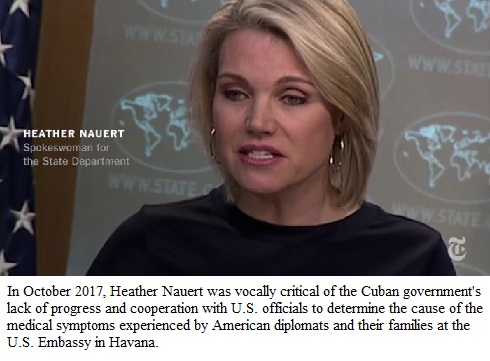 President Donald Trump's choice to succeed Nikki Haley as the United States Ambassador to the UN is Heather Nauert. She is a former Fox News journalist and recently served as primary State Department anti-Cuban spokesperson. It is a fact that Little Havana's U. S. Senator Marco Rubio has the final word regarding any Trump appointment that might even remotely relate to Rubio's regime-change plans for Cuba. Of course, Heather Nauert easily meets Rubio's criteria.