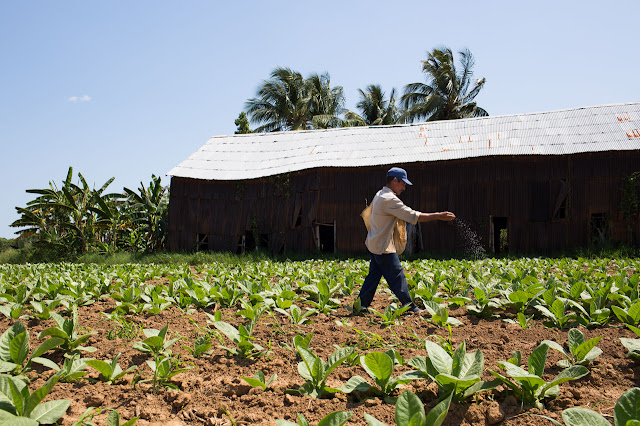 The Wall Street Journal this week published an updated article on the Cuban economy that is trying real hard to survive...and even thrive...amidst President Obama's harmonious sanity and the still lingering cruel insanity of Congress's Batistiano Helms-Burton law that was intended to finish off Revolutionary Cuba back in 1996. The article was written by Tripp Mickle and featured the usual superb photos, such as the one above, by Lisette Poole. It's ominous title was: "Cuba's Cigar Industry Isn't Ready for the American Moment." That assessment is correct. The brief window afforded by President Obama cannot suddenly offset the deeply ingrained imperial bawdiness of the previous ten U. S. presidential administrations, even including three Democratic presidents -- Kennedy, Carter, and Clinton -- whose efforts to loosen the stranglehold were cruelly erased by...an assassination, provocative terrorism, and a bought-and-paid-for Congress. 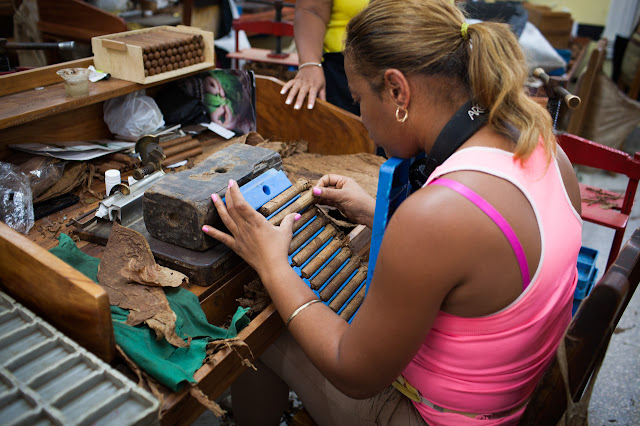 The aforementioned  Wall Street Journal article stated: "Cuba is trying to boost cigar production in anticipation of the end of the U. S. trade embargo but tobacco fields lie fallow, and the country isn't likely to be ready for the demand boom. The fertile soil here in the Pinar del Rio valley has long produced a richly flavored, slow-burning tobacco that is, without exaggeration, the envy of the world. Some of Cuba's best-paid workers roll the cured leaves by hand into cigars carrying the names Cohiba and Montecristo and Partagas, luxury brands as coveted by aficionados as the sparkling wine of Champagne or the simple malt whiskies of Scotland. For more than 50 years, Cuba hasn't been able to sell its cigars to its giant neighbor to the north, the world's largest cigar-market. Now, with the U. S. moving to restore trade with Cuba, excitement is building that a great opportunity is at hand. If the trade embargo is lifted anytime soon, however, Cuba is unlikely to be ready." 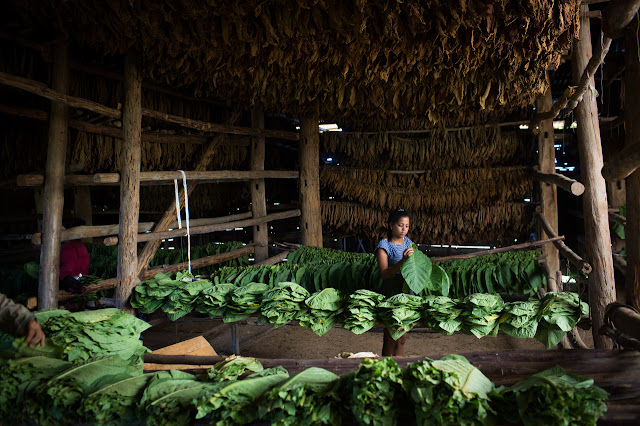 The well-researched WSJ update on Cuba's cigar industry stated that the island "exported 91 million cigars in 2015, down 58% from 2006." With the best soil in the world for tobacco leaves, the WSJ explained that "Thousands of acres of the world's best tobacco-growing soil are now fallow with thorny 8-foot bushes known as Marabu choking the red, rich soil." In other words, Cuba's cigar industry, like sugar and all of its other industries, is the victim of the U. S. Cuban policy that has been dictated by the revengeful remnants of the Batista-Mafia dictatorship that was booted off the island to a safe and lucrative haven on U. S. soil. 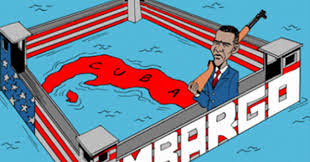 When Barack Obama became President of the United States in 2009, he was forced to march to the dictates of a Cuban policy that he and the rest of the world detested. Amazingly, even with Batistianos and Republicans firmly in control of the U. S. Congress, President Obama has skillfully used his Executive Powers to impose -- in the final months of his two-term presidency -- at least a degree of Cuban-related sanity and decency to the hallowed U. S. democracy that shamefully teamed with the Mafia to support the thieving-brutal Batista dictatorship in Cuba in the 1950s and then exacerbated that disaster by supporting the overthrown Batistianos and Mafiosi on U. S. soil from 1959 till today...at least till the Obama presidency. 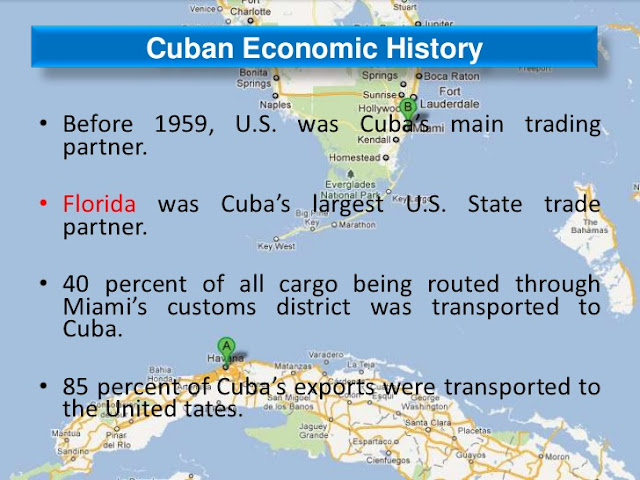 Prior to 1959, meaning prior to the Cuban Revolution, the U. S. and Cuba were the closest of trade partners, with the MIami-to-Havana commerce alone dominating the Florida Straits and the Caribbean. From a dollar standpoint, the nexus seemingly created millionaires minute-by-minute. But there was a problem. The newly minted millionaires were, in the 1950s, Batistianos, Mafiosi and greedy U. S. businessmen and politicians who backed the brutal dictatorship. There was never a consideration of evenly distributing all that commerce and wealth. That fact, coupled with the extreme brutality designed to perpetuate it, spawned the Cuban Revolution that shocked the world on January 1, 1959 by chasing the Batistianos and Mafiosi to the U. S. where, as it turned out, they still had mammoth support from greedy U. S. businessmen who have been able to purchase enough of the U. S. democracy to enact their own Cuban laws in a for-sale Congress. That unsavory cast of characters since 1959 has been trying to recapture Cuba while facing, till Obama, little resistance. The fact that they haven't succeeded remains utterly shocking. 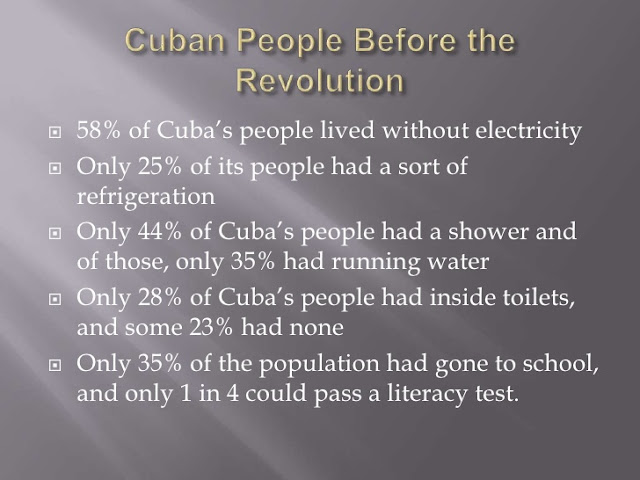 For sure, in Batista's Cuba prior to the revolution the island was awash in money. But almost every penny or peso was hoarded by the Batistianos, the Mafiosi and the politically savvy U. S. businessmen who supported them. The graphic above shows that there was no thought of helping ordinary Cubans and, indeed, extreme brutality was heaped upon them if they complained. In Revolutionary Cuba, despite the embargo since 1962, while everyday Cubans are certainly not rich, they have "metrics" praised by the United Nations, the World Bank, and the World Health Organization, which include free and excellent education, free and excellent health care, free or subsidized shelter, free or subsidized food, and, according to the UN, Cubans are among "the world's safest people." The U. S. rates Cuba's Gross National Product PPC {purchasing power parity} at $212 billion, which is $18,796 per capita. And the U. S. says Cuba's nominal GNP is $79 billion, which is $7,274 per capita. That's different from the "20 dollars a month" the U. S. media harps on. Remittances from Cuban-Americans in Miami to relatives in Cuba total about $3 billion a year. And the vast disparity in wealth from the Batista years is not remotely evident in Revolutionary Cuba. 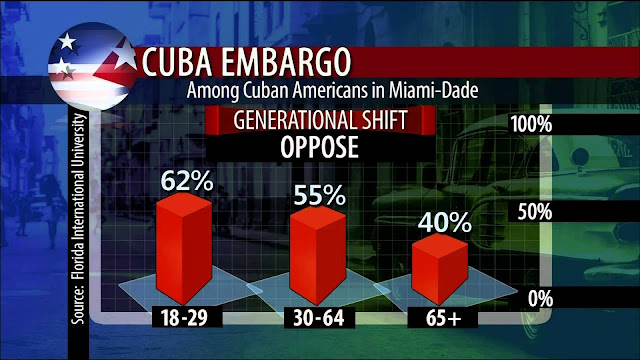 Since 1959, the tactics employed to regain control of Cuba have included assassination attempts, the Bay of Pigs military attack, terrorism that included the bombing of Cuban hotels to discourage tourism, and a trade embargo imposed in 1962 for the stated purpose, according to declassified U. S. documents, of starving and depriving Cubans on the island for the purpose of causing them to rise up and overthrow their revolutionary government, presumably so the Miami-based Batistianos-Mafiosi could race back the next day. For all those decades, the Cuban narrative in the U. S. has been dictated by leading remnants of the Batista dictatorship who also have easily enacted fiercely anti-Cuban and pro-Batistiano laws in the U. S. Congress. In that milieu, the majority of U. S. citizens meekly acquiesced to whatever the Batistianos, hiding behind the skirts of the U. S. superpower, had in store for Cuba...even when it involves {to this day} unlimited streams of tax dollars paying for endless anti-Cuban/pro-Batistiano schemes. Yet, inspired by a more decent President, Mr. Obama, and by a younger generation of Americans and Cuban-Americans, such cowardly and undemocratic acquiescence has markedly subsided. As you can see from the graphic above, today the vast majority of younger Cuban-Americans even in Miami-Dade, which is also known as Little Havana, now favor ending the embargo and dealing sanely with Cuba. Yet, lest we forget, never has the U. S. dealt democratically with Cuba. So, not even remarkable inroads by Obama, even coupled with what appears to be a much more enlightened and patriotic younger generation of Americans, can be expected to forever hold off a few well-heeled and well-backed Batistianos. 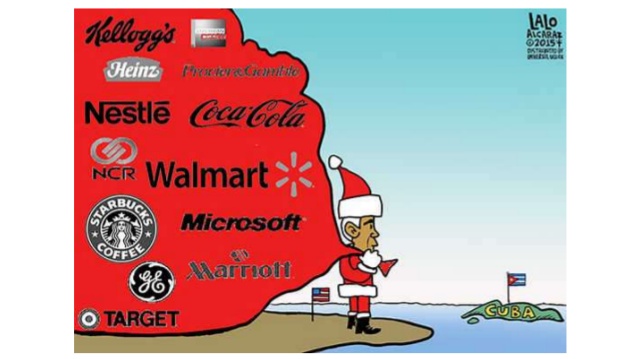 But this graphic offers hope. It shows Mr. Obama dressed as Santa Claus gazing across the Florida Straits at Cuba. A huge goody bag is slung over his shoulder as he embraces the hope that his orchestration of air, land and sea business ties with Cuba will thwart the nefarious designs of a Republican-controlled Congress and even a future Republican president when it comes to Cuba. Obama considers the U. S. a democracy and Cuba a sovereign nation. Republicans consider Cuba a piggy-bank. 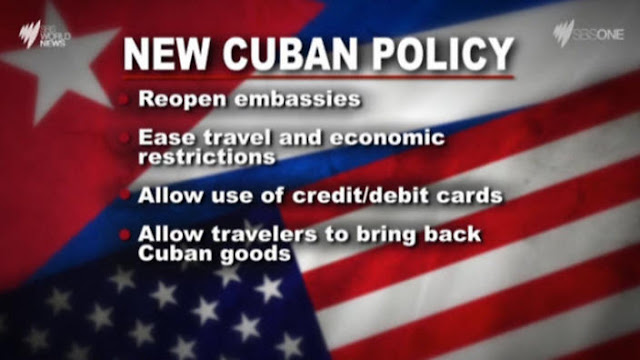 President Obama's historic New Cuban Policy has already put into motion numerous obstacles for the Batistianos and their sycophants who still maintain that they will begin dismantling Obama's positive advances "the day he leaves the White House," which is a day that is fast approaching in January, 2017. As indicated above, Obama is allowing U. S. tourists to bring back some "Cuban goods," even including a limited amount of cigars. This week's Wall Street Journal article discussed the "fallow" fields of soil in Cuba, the best in the world for growing tobacco leaves, being overrun with thorny Marabu bushes. But if the embargo is lifted Cuban farmers would have the tractors and other equipment to revitalize that soil and once again be able to sell their world-class cigars to the world's largest market, the United States. 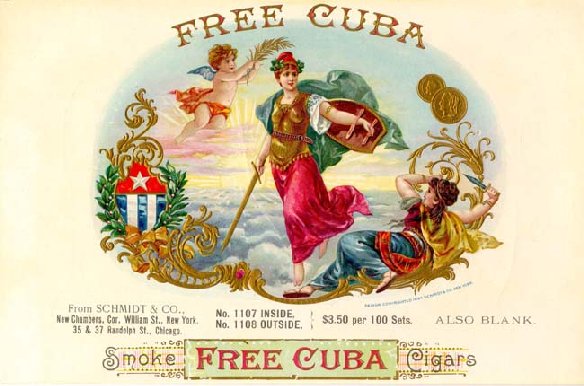 Freed from the embargo, Cuba could sell cigars {etc.} in the U. S.
And speaking of cigars: 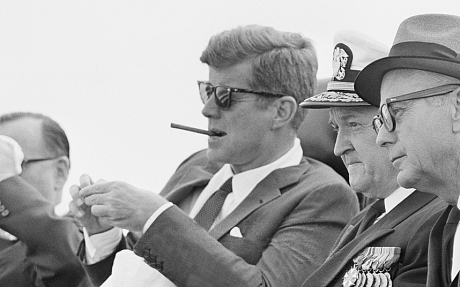 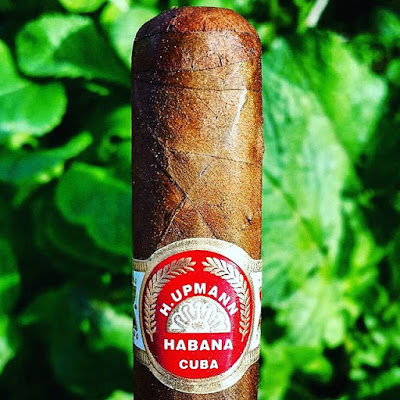 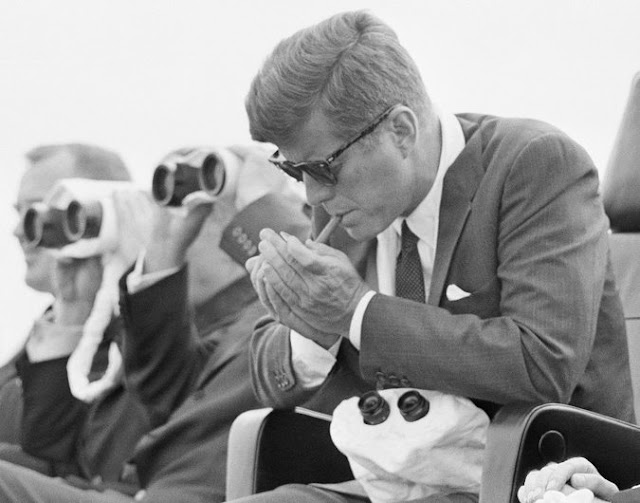 John Kennedy's truncated first-term as President of the United States was tightly tied to the tumultuous U.S.-Cuban quagmire. JFK in 1960 inherited a scheme from the Eisenhower administration to recapture Cuba, a dire plan devised by powerful right-wingers such as Eisenhower's Vice President Nixon and the Dulles brothers, Eisenhower's Secretary of State John Foster Dulles and CIA Director Allen Dulles. JFK carried through on those plans, which included trying to assassinate Fidel Castro, the Bay of Pigs attack, using planes from Florida to bomb sugar and tobacco farms, using speedboats to strafe coastal fishing cabins, etc., etc. But history also registers this fact: On Friday, Feb. 2, 1962, JFK called his Press Secretary Pierre Salinger into his Oval Office and told Salinger to "get me 1,000 of those Cuban cigars." Salinger, also a cigar aficionado, quickly rounded up 1,200 of JFK's favorite Cuban cigars, which were H. Upmann Petits, and gave them to the President the next morning -- Saturday, Feb. 3, 1962. After getting his supply of cigars, JFK immediately reached into his desk drawer, pulled out Document 3447, and signed it into law. Document 3447 was and is the document that legalized the United States embargo of Cuba. 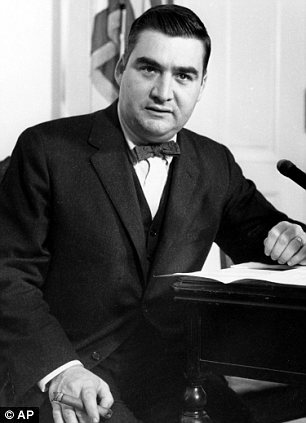 This is Pierre Salinger shown in 1962 smoking a Cuban cigar when he was President Kennedy's Press Secretary. Salinger later became an author and a correspondent for ABC News. It was Salinger who confirmed his purchase of the 1200 cigars that his boss, JFK, insisted on before he would sign the Cuban embargo into law. Salinger also confirmed another historic fact. In November of 1963, President Kennedy called his top aides into the Oval Office, including Salinger, and told them, "After I return from the southern trip to Miami and Dallas, the top priority of this administration will be to normalize relations with Cuba." 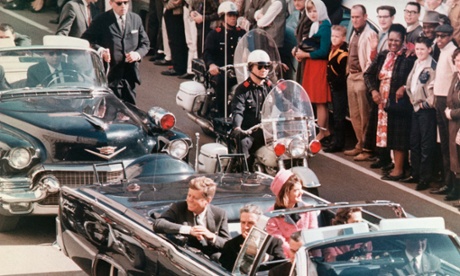 But Kennedy was assassinated in Dallas on Nov. 22, 1963.
He would easily have been elected to a second term in 1964.
His death ended his plan "to normalize relations with Cuba." 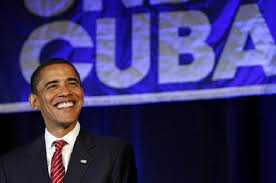