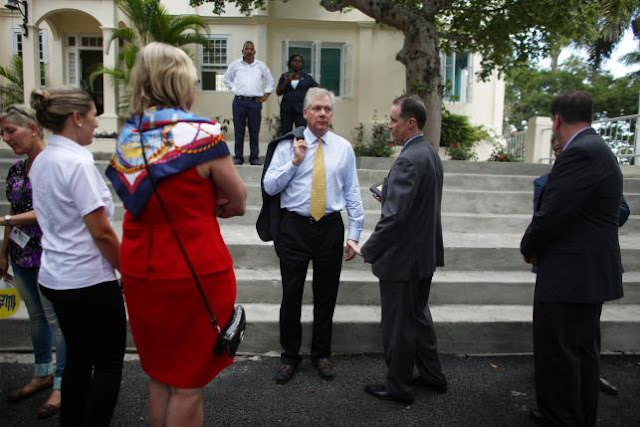 This photo was taken in Havana yesterday {May 11} by Alexandre Meneghhini for Reuters. It shows Doug Oberhelman getting ready to hold a news conference. Mr. Oberhelman is the CEO of Caterpillar, the world's largest maker of heavy equipment with headquarters in Peoria, Illinois. Mr. Oberhelman is among scores of U. S. business executives anxious to do business in Cuba. He loves Cuba's ultra-modern Mariel Port Economic Zone that received a billion-dollar upgrade and is a key to Cuba's economic future. Located 28 miles southwest of Havana, Mariel is, according to Mr. Oberhelman, "an efficient modern harbor that competes with others around the world." Mr. Oberhelman envisions a Caterpillar plant at the Mariel Port. 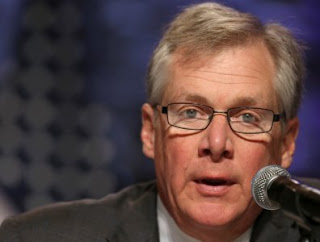 A miffed Doug Oberhelman, the Caterpillar boss, was asked yesterday in Havana when he expects the U. S. embargo of Cuba to end. He said he didn't know but that "It can't come soon enough for me." That sentiment, of course, is echoed by CEOs in all 50 of America's states, but they too are victims, like collateral damage, of their nation's embargo against Cuba.

Caroline McConnie is the top executive at Rimco, a company in the U. S. Territory of Puerto Rico. She says she is already begging the U. S. government to allow Rimco to sell Caterpillar products in Cuba under an agreement she has with Mr. Oberhelman. 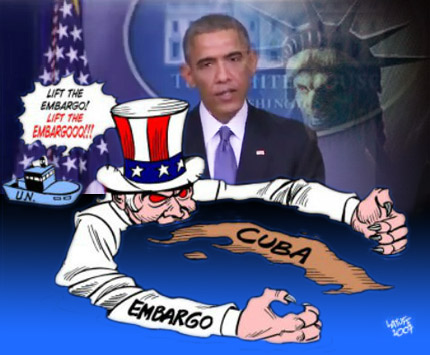 The U. S. embargo of Cuba has existed since 1962. President Obama's historic Executive Actions have sliced remarkably into many of its most onerous aspects but its removal is up to the U. S. Congress that, for many decades, mandated countless U. S. laws at the whims of a handful of self-serving and revengeful Cuban-Americans, many of whom are now second-generation billionaires. According to declassified U. S. documents, the embargo began in 1962 after assassination attempts against Fidel Castro and the 1961 Bay of Pigs attack had failed to regain control of the island from the pugnacious Cuban Revolution. Those documents reveal that the embargo was designed to starve and deprive Cubans on the island to induce them to overthrow Castro. It's now the longest and cruelest embargo in history by a strong nation against a weaker one, an archaic relic opposed 191-to-2 by a yearly vote in the United Nations and one even opposed by most Cuban-Americans in Miami!! The embargo hasn't starved Cubans but it has surely deprived them, just as it would have deprived or might even overthrown nations much stronger than the Caribbean island -- Canada, for example. As Caterpillar's Doug Oberhelman and Rimco's Caroline McConnie attested yesterday, the embargo has deprived a lot of Americans too. Yet, Cuban hardliners and their sycophants in the U. S. Congress could care less. Their lushly funded propaganda machines continue to bellow about overthrowing Fidel Castro before he turns 90 on August 13th. And after Castro, they'll think of something else. The vast Castro Cottage Industry in the U. S. is flush with congressionally approved piggy banks providing unlimited streams of tax-dollars to a selected few, while shaming the U. S. worldwide.