And Feel Sorry For Him! 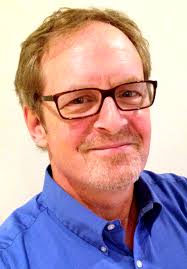 Walt Handelsman, one of America's greatest journalists, reminded me this week of how much I feel sorry for CNN/CBS broadcast journalist Anderson Cooper. Permit me to explain. The 59-year-old Handelsman is the Pulitzer Prize-winning Editorial Cartoonist for the New Orleans Advocate. I also greatly respect Cooper as one of television's rare news journalists with laudable instincts to actually cover the news in an industry that insults its viewers by filling most of its airtime with obnoxious and biased Talking Head pundits who pontificate mouthy junk incessantly. Still reliant on CNN for Breaking News, Americans watching Cooper night-after-night are seeing him be forced by corporate ownership to introduce one Talking Head after another. As opposed to actually covering the news, the Talking Head virus is a classic insult to him, his viewers and his industry. This week, one particular Editorial Cartoon by the brilliant Walt Handelsman reminded me anew of how America's once-proud broadcast industry -- with giants like Edward R. Murrow, Walter Cronkite, Ted Turner, Kate O'Brian, etc. -- has evolved, or devolved, into an unfunny corporate-capitalist joke. That basic fact, considering how vital a thrivingly competent media is to the viability of the U. S. democracy, is cause for acute concern from democracy-lovers. 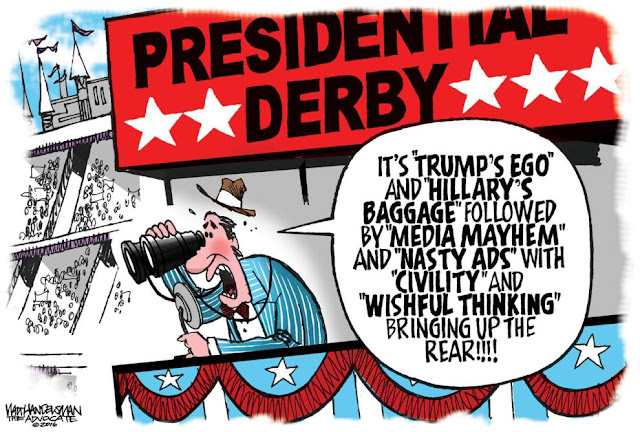 This is the Walt Handelsman editorial cartoon this week that made me shed {almost} some fresh tears for Anderson Cooper and the handful of skilled broadcast journalists whose talents have been swallowed up by the billionaire-owned cannibalistic, pontificating, money-crazed television industry. Go back up and carefully study the cartoon. Handelsman was obviously inspired by last Saturday's Kentucky Derby, which was won by unbeaten Nyquist. Notice that Handelsman's names for his political race horses are: "Trump's Ego," "Hillary's Baggage," "Media Mayhem," "Nasty Ads," "Civility," and "Wishful Thinking." And notice that Trump and Hillary are leading in the ongoing presidential horserace with the other four "bringing up the rear." BRILLIANT, ABSOLUTELY BRILLIANT!! So, now you know why I think that great Editorial Cartoonists are now the best U. S. journalists and why I feel sorry for Anderson Cooper. 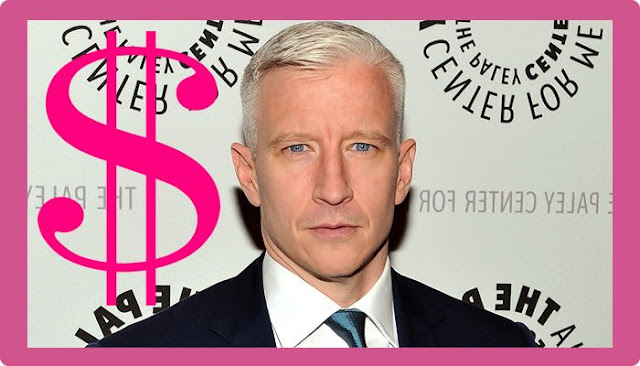 According to Celebrity Net Worth, Anderson Cooper has a personal fortune of $100 million. Although his mother is Gloria Vanderbilt, Anderson has earned his own money. His yearly salary for his CNN and CBS gigs is $11 million. I normally feel sorry for people poorer than Anderson, but nightly as the prime CNN anchor, Anderson is a recipient of my sorrow because his broadcast skills are smothered by the capitalist greed that permeates all "news" networks. The airways are supposedly owned by the public but in reality they are owned by money-crazed and politically minded individual and corporate billionaires such as Rupert Murdoch, GE, Time-Warner, Disney, Comcast, etc. The airways are veritable gold mines, especially so because the billionaire owners can easily pay lobbyists who can then easily purchase enough members of Congress to guarantee that they don't pay their fair share of taxes and can further save money by using studio-bound Talking Heads in place of real journalists who could actually go out and cover news. 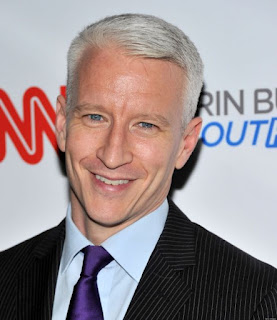 On his prime-time CNN hour each night, Anderson Cooper's facial expressions often exude his regret for not being able to actually call on real journalists from news-spots around the nation and the world. Both Anderson and CNN fail in trying to mask his natural journalistic instincts, which is to utilize the massive technical advantages broadcast networks have to cover the news. Instead, each night and each segment Anderson is forced to introduce two, four, six, sometimes TEN Talking Heads! Following those corporate orders, he does the best he can because typically he tries, at least clandestinely, to tip-off his viewers. His typical introductions are almost explicit: "Let me introduce our panel tonight. On CNN throughout the day you've heard Ana Navarro but we must have her back. Ana is a biased propagandist from Miami. She has made a lot of money and fame promoting Jeb Bush and Marco Rubio. And tonight once again she will tell our viewers how stupid they are for not supporting and funding the richly funded presidential bids of Bush and Rubio. Next to Ana is Amanda Carpenter. She got rich as Ted Cruz's top propagandist. Amanda again tonight will use our airtime to remind our viewers how stupid they are for not voting for, campaigning for, and funding Ted Cruz's presidential bid. And next to Angela is Kayleigh..." This goes on night-after-night, hour-after-hour. The extremely biased Talking Head propagandists can dominate all "newscasts" in the U. S. because the monopolistic nature of the industry, plus a lobbyist-instructed U. S. Congress, can weed out competitors who might want to duplicate the broadcast instincts of Edward R. Murrow, Ted Turner, and Walter Cronkite. 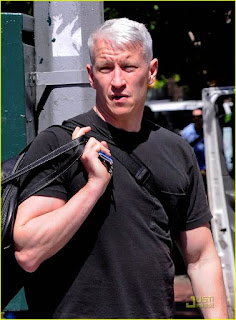 Anderson Cooper carved out his broadcast credentials by actually going out and covering news events -- including dangerous war zones or travesties like Hurricane Katrina as it was devastating New Orleans. Now in a Talking Head-driven industry, Anderson is paid $11 million a year to introduce Talking Heads who, as he undoubtedly well knows, are insults to broadcast journalism and to viewers who need and deserve good, unbiased news coverage. This week, for example, apart from the money, it is believed that, while introducing all those innocuous and biased Talking Heads, Anderson probably left his anchor-chair to go check on real news events: Another week of record murders in Chicago; deadly and historic floods in Texas; deadly and historic tornadoes in the nation's heartland; millions upon millions of Americans in a presidential election year trying desperately to find a non-establishment candidate who is not bought-and-paid-for; the Zika virus threatening America and the region; global warming threatening the world; nuclear powers Russia, China, and North Korea increasingly more bellicose; Iran this week firing off a nasty long-range missile; a new list of individuals and corporations that are hiding money in Panama to avoid paying taxes in America; etc., etc. Anderson should get nightly updates on such events on his own program, but not from Talking Heads. 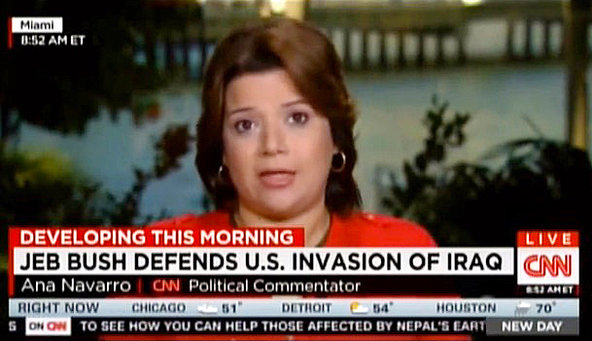 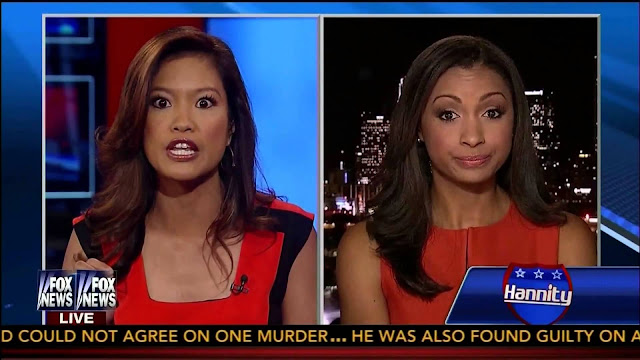 Michelle Malkin vs. Eboni K. Williams; familiar Talking Head pundits on Fox. After this ratings boosting verbal cat-fight lasting ten minutes or so, viewers were supposed to cease thinking for themselves. 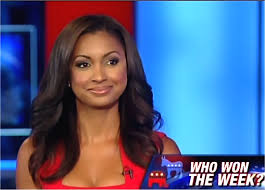 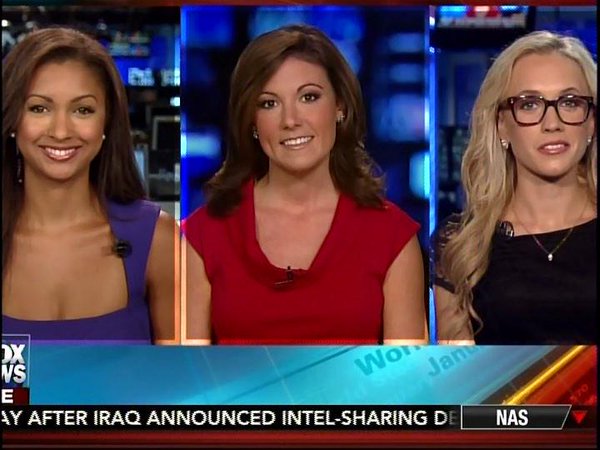 In fact, shortly thereafter Eboni K. Williams also scored knockouts against these two other Talking Heads. Meanwhile, Fox and other cable "NEWS" channels {obsessed with being propaganda machines} were conveniently ignoring dozens of real news-worthy events around the nation and around the world. 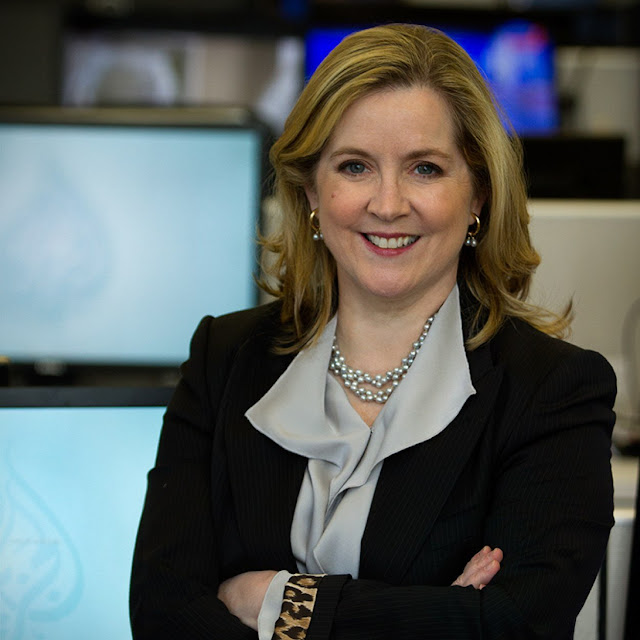 Kate O'Brian is the best broadcast journalist in America today. And that's why she's out of a job. For years as the boss at ABC News, Kate believed in hiring the best reporters she could find. But increasingly her corporate bosses at Disney urged her to hire Talking Heads, not journalists. Kate wanted out. Aljazeera America, owned by Qatar princes, told her if she would head their ambitious upstart network, she could fulfill her broadcast instincts. Kate accepted and immediately hired hundreds of the best broadcast journalists in the world -- including many of the best known anchors, reporters and producers from the best-known networks. As she tried so hard to do at ABC News, Kate at Aljazeera America totally minimized Talking Heads as she created the best journalist-driven broadcast network, not only in the U. S. but in the world. At the outset, Kate announced her love of great broadcast journalists and her dislike for Talking Heads. She also suggested that Aljazeera should be dropped from her network's name, but it wasn't. Kate cried when she was told Aljazeera America was shutting down because of its dismal ratings in the U. S. 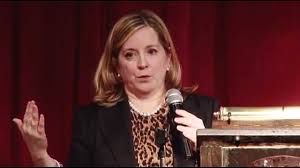 Kate O'Brian remains America's best broadcast journalist but her distaste for a Talking Head-dominated industry leaves her out in the cold. That means America, including its democracy, suffers. If CNN, with its unmatched resources, put Kate in charge of its news coverage, the broadcast industry in America would immediately regain much of its long-lost luster. Then newshounds like me wouldn't have to feel sorry for stifled journalists like Cooper whose broadcast instincts seem to mirror those of the great Kate O'Brian. 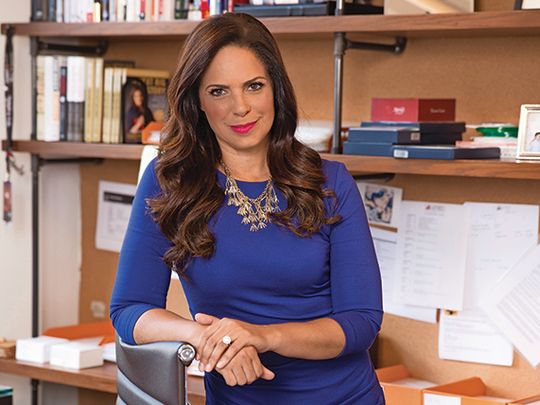 Soledad O'Brien is America's best documentarian. While Kate O'Brian was hiring the best anchors and reporters at Aljazeera America, she also hired Soledad to produce and anchor superb documentaries.

Soledad O'brien -- with the quotation above -- explained why she jumped at the opportunity Kate O'Brian offered her. So did hundreds of other great broadcast journalists whose familiar names you can easily Google. As you see above, Soledad longed for "quality programming" centered around "underreported stories" that yearned to be reported. By using those words, and by being a Kate O'Brian disciple, Soledad was denouncing the insidious Talking Head dominance of America's "news" networks. 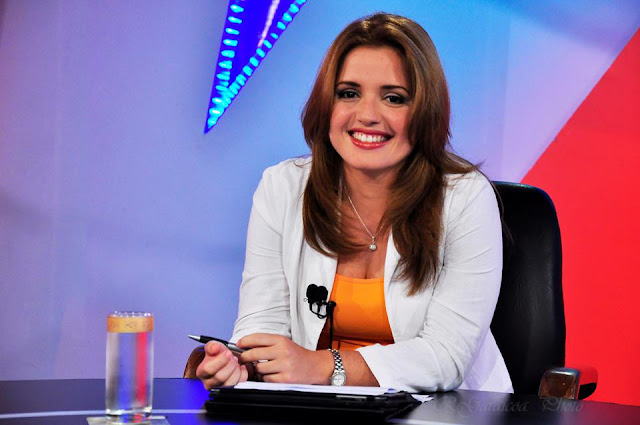 " "But hey," you say, "I punched up Cubaninsider to get Cuban news. What does America's saturation of broadcast Talking Heads have to do with Cuba?" A lot actually. Walt Handelsman's racehorse editorial cartoon also reminded me of Cristina Escobar, Cuba's absolutely brilliant 28-year-old broadcast journalist. A superb news anchor and interviewer, Cristina covered the last of the four Vidal-Jacobson diplomatic sessions in Washington earlier this year. She turned out to be the star at a news conference hosted by White House spokesman Josh Earnest. Later in speeches around Washington and when she was interviewed by U. S. journalists, Cristina made particularly interesting points: {1} "I believe as a broadcast journalist in Cuba I have more freedom to tell the truth about the U. S. than U. S. journalists have to tell the truth about Cuba;" and {2} "The lies the U. S. media tells about Cuba hurts everyday Cubans the most." 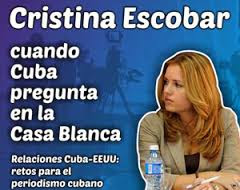 Now whether or not you agree with Cristina Escobar's two significant quotations, I believe you should respect the fact that she sincerely means them. Moreover, as an acute observer of broadcast journalism in the United States as well as being a skilled broadcast journalist in Cuba, she has the insight to provide such critiques. Andrea Mitchell, the high-profile veteran NBC broadcast journalist, made it a point to personally praise Cristina in Washington. Cristina replied that she had "long admired" Andrea's work. So, I wonder if Cristina also feels sorry for America's talented broadcast journalists like Anderson Cooper who are forced to forsake news coverage by saturating the airways with biased Talking Head pundits? 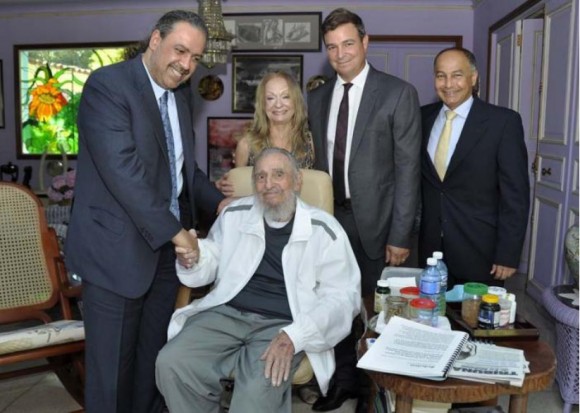 This is a new photo of Fidel Castro this week that his fans and critics will ponder for hints about his health. The two men on the flanks are the two top officials with the International Olympic Committee shown when they visited Fidel in his Havana home. That's his wife Dalia right behind him and she is standing beside their son Dr. Tony Castro. The photo was taken by Alex, another of Fidel's and Dalia's five sons. Photos in his home and on public outings prove that Fidel has been more active recently. Dalia, his doting wife since 1980, confirms it. She said: "Fidel is looking forward to his 90th birthday on August 13th. We all are. Yes, for a man his age and for what he has gone through, I am certainly pleased with his new vigor."
&*************************&