Cuba and U. S. Superstars 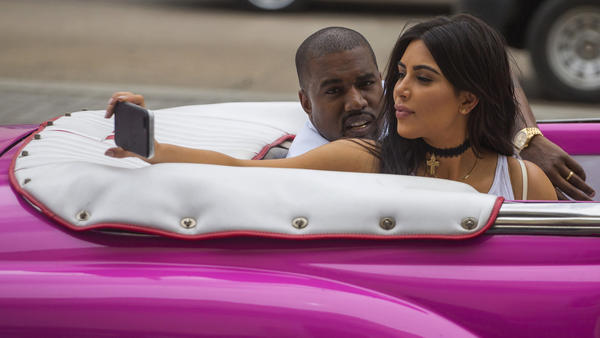 This AP photo was taken in Havana this week by Desmond Boylan. It shows America's famed couple Kim Kardashian and Kanye West being driven around Cuba's capital city in a classic 1950s convertible, as Kim takes a selfie with her Smart Phone. 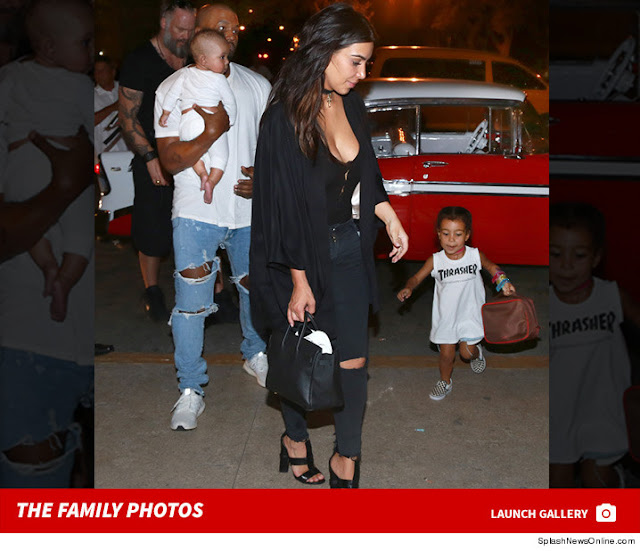 The celebrity-chronicling super blog TMZ used this photo to highlight its massive coverage of Kanye West, Kim Kardashian, and their two children in Cuba this week. But CNN and other cable news outlets also have had field days with this particular celebrity visit to the island, routinely ridiculing it. 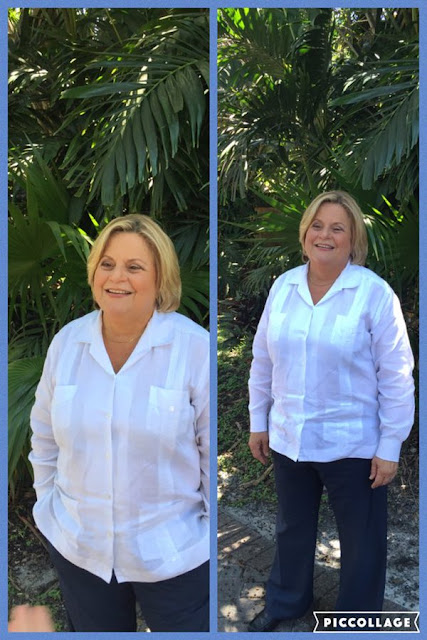 Not surprising, Ileana Ros-Lehtinen -- the Havana-born anti-Castro zealot from Miami who has been in the U. S. Congress since 1989 -- raved the loudest about the U. S. celebrity tourists and President Obama's open-door policy that has sliced into six-decades of the long-unchallenged Miami-directed war-like treatment of Cuba. Ros-Lehtinen said: "Haven't the Cuban people suffered enough? Fidel, Raul Castro, and now the Kardashians?" The cowardly, incompetent U. S. media has lapped up such Ros-Lehtinen quotes this week, a media that doesn't have the guts to remind Americans that the Kardashians are not in Cuba to "hurt" the Cubans on the island but Ros-Lehtinen's historic support of such things as the cruel and endless embargo and her unconscionable support {as bravely detailed by Miami Herald columnist Jim DeFede} of the most infamous Miami-based terrorists have indeed "hurt" Cubans on the island, a "hurt" that President Obama is bravely trying to heal. 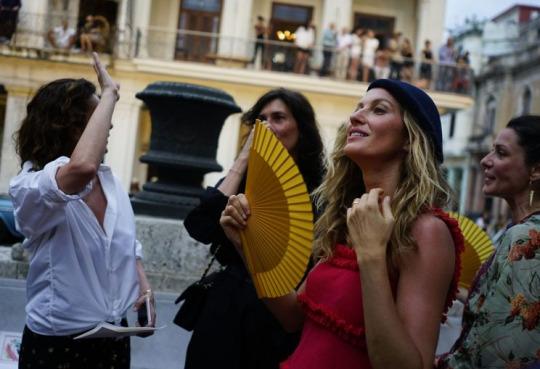 This AP photo shows Gisele Bundchen fanning herself on a crowded street in Havana. She is the world's highest paid supermodel and she is also the wife of Tom Brady, the NFL superstar quarterback. This week it seems Havana is overwhelmed with famous visitors thanks to President Obama opening doors to Cuba that were closed for over half a century, such as allowing cruise ships from the U. S. to Cuba. 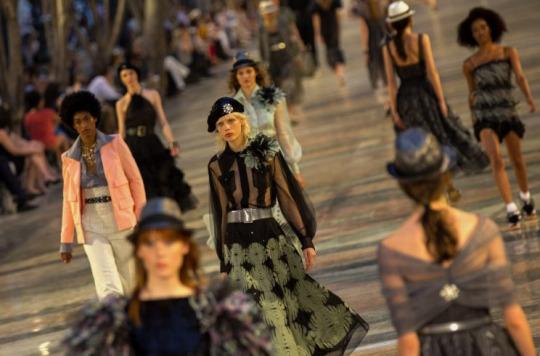 Chanel models {AP} are using Cuba as a runway this week!! 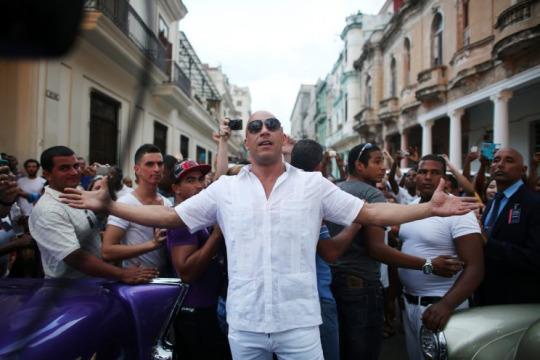 Meanwhile, America's superstar actor Vin Diesel {Reuters} is commanding the next street over in Havana. Diesel and his gigantic Hollywood crew, including a host of other major actors, are in Cuba filming the next huge movie in the wildly popular Fast & Furious franchise. Cubans are thrilled...but awed!! 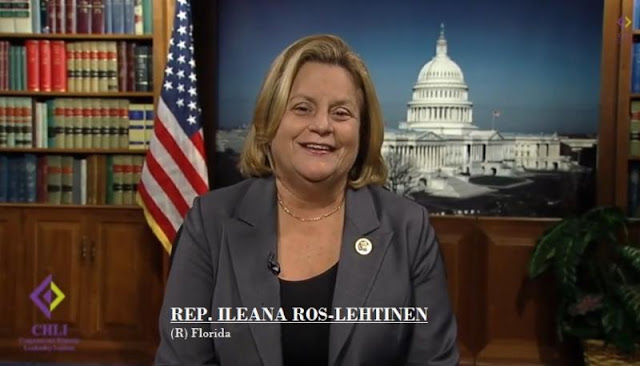 Havana-born U. S. Congresswoman Ileana Ros-Lehtinen takes an extremely dim view of any positive result of President Obama's efforts to normalize relations with Cuba. The Los Angeles Times yesterday had a major article entitled: "Kardashians' Havana Visit Is Part Of A 'Cruel Trick on the Cuban People,' Congresswoman Says." Ros-Lehtinen told the Los Angeles Times, "Both the Karl Lagerfeld Chanel fashion show and the Kardashian trip to Cuba for their TV show is emblematic of celebrity culture at its worst." Ros-Lehtinen was the first of the Bush-aligned Cuban-American anti-Castro zealots in Miami to be elected to the U. S. Congress, a spot she has held since 1989 when her Campaign Manager was Jeb Bush. Although most Cuban-Americans in Miami favor President Obama's sane efforts to normalize relations with Cuba, only anti-Castro extremists get elected to the U. S. Congress or become presidential candidates. Their rants are never challenged by the mainstream U. S. media nor, generally, by intimidated and proselytized Americans. However, such tirades as Ros-Lehtinen unleashed yesterday are emblematic of the worst elements of the failed, flawed and extremely cruel U. S. Cuban policy that, for decades, has been dictated by self-serving and revengeful Cuban-Americans and their sycophants, such as the Bush dynasty that, perhaps, Americans are also finally getting tired of...as indicated by Jeb's and Rubio's laughable presidential bids. 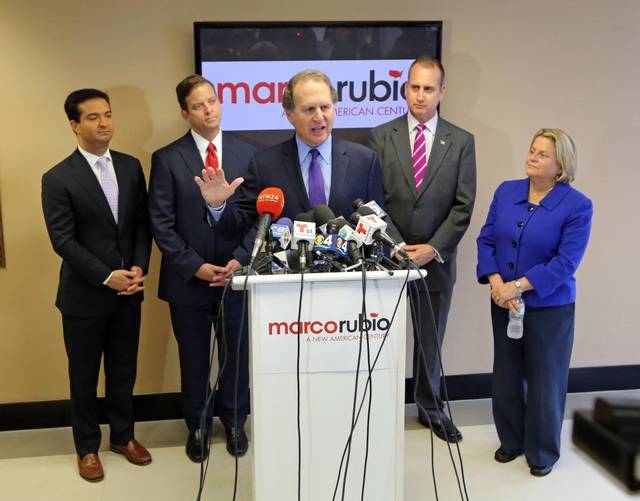 This Miami Herald photo shows five leading ultra-powerful anti-revolutionary Cuban-Americans who dominate South Florida's politics along with the entire area's obligatory Cuban mayors, etc. They supported Jeb Bush's presidential bid till he was quickly and unceremoniously eliminated. Then, at the above news conference, they, of course, fired up support for their own Cuban-American U. S. Senator from Miami, Marco Rubio. Then Rubio was unceremoniously eliminated when non-politician and presumably non-bought-and-paid-for Donald Trump trounced him in the Florida primary. Such results indicate that the firm grasp anti-Castro zealots have had on Miami politics since 1959 may finally have to allow for the moderate opinions that are, in fact, in the majority among the two-million Cuban-Americans who deserve a voice. 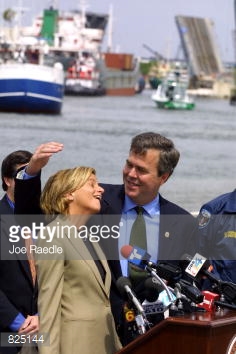 The hallowed halo the Bush dynasty's Jeb Bush so self-servingly spun around Ileana Ros-Lehtinen's head in 1989 has served to totally dominate America's egregious Cuban policy from that day till...well, till America got a very brave President named Barack Obama. Ros-Lehtinen, you know, screamed loudly when she claimed Obama didn't even consult her as he forged ahead with his incredibly brave and positive Cuban policies. Now, I wonder why! Ros-Lehtinen and her ilk can still dictate Cuban policy to Congress but not Mr. Obama and, based on polls and this year's presidential election, apparently not to wiser and braver U. S. voters, including those in Florida and New Jersey. The demise of the lushly funded and dangerously ambitious presidential aspirations of the Jeb-Marco-Ted cabal marks at least a temporary end to both the Bush dynasty and the stranglehold Cuban-American extremists have had for decades on America's Cuban policy. But, of course, retaliatory actions and the 2020 presidential election loom ominously ahead. 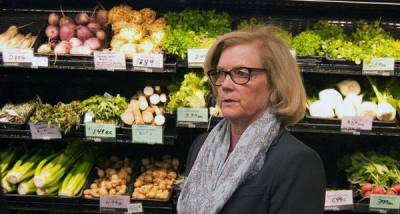 Chellie Pingree has represented Maine in the U. S. Congress since 2009. In stark contrast to Cuban-Americans that get elected to Congress, Congresswoman Pingree has no desire to harm Cubans on the island for revengeful, economic or political purposes. In fact, she was in Havana this week meeting with Cuba's Josefina Vidal. Later, Congresswoman Pingree released a statement saying that she and Vidal "discussed the mutual benefit of fully opening trade between the U. S. and Cuba." There is a growing PRO-Cuban sentiment in Congress that for decades has rendered a Cuban policy purely dictated by extremist Cuban-Americans and right-wing sycophants to the detriment of both Cubans and Cuban-Americans. 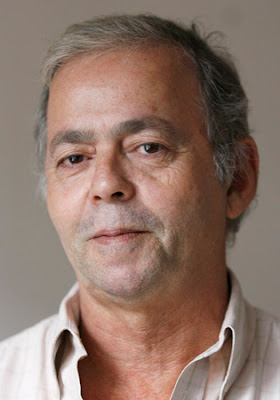 For the past quarter century, Marc Frank has been a superb Reuters journalist reporting from Cuba. He best chronicles the Obama-orchestrated changes currently cascading across the island. This week he marveled at how Cuba is trying to cope with the drastic influx of U. S. tourists such as those that arrived on the first cruise ship allowed to visit Cuba from the U. S. in half-a-century and now Cuba's ten international airports must prepare for the first commercial U. S. flights since 1962. Marc Frank wrote: "To accommodate the planned arrival of U. S. commercial service later in 2016, Cuba's government plans to expand its airports. In the meantime, the construction of new hotels and the renovation of others is already underway."  Of course, the astute Mr. Frank also remains quite aware that the recently beaten Rubio-Bush-Cruz alliance plans to regain dominance of America's Cuban policy as soon as Mr. Obama leaves the White House in January. 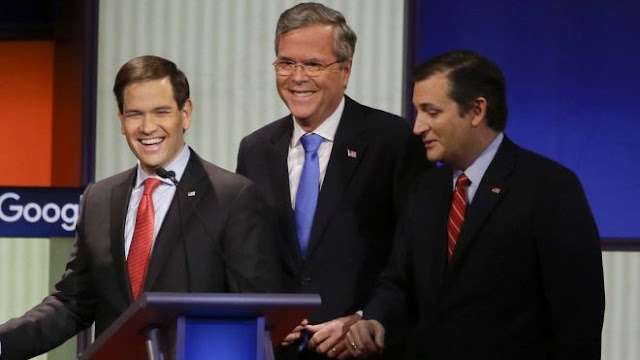 Rubio-Bush-Cruz.
Are they just down, and not out?
Meanwhile:
Cuba is being overwhelmed,
by U. S. celebrities!!
And meanwhile: 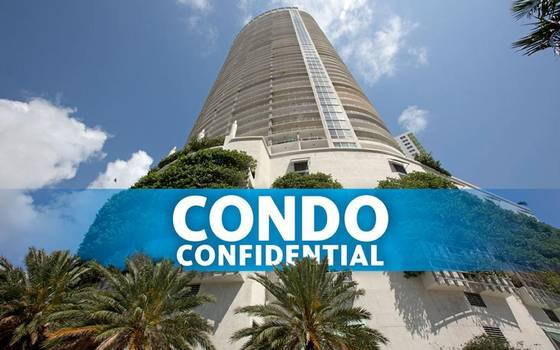 The Miami Herald used the above illustration to highlight a major article you may want to check out. It's entitled "Condo Confidential." It states: "Miami real estate is a haven for money abroad that is sometimes poorly vetted." Now, IMAGINE THAT!! Foreign billionaires plus 100 million rich tourists in Florida each year!! 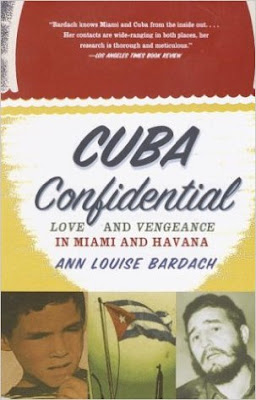 "Condo Confidential" in the Miami Herald reminds me of "Cuba Confidential: Love and Vengeance in Miami and Havana" by the preeminent Cuban author Ann Louise Bardach. Some of the guys she wrote about in such vivid detail -- Luis Posada Carriles, Orlando Bosch, etc. -- were "poorly vetted" in Miami too.