RUBIO Dictates Policies to Biden Too

Just as RUBIO Dictated to Trump!! 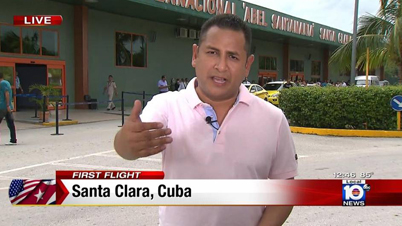 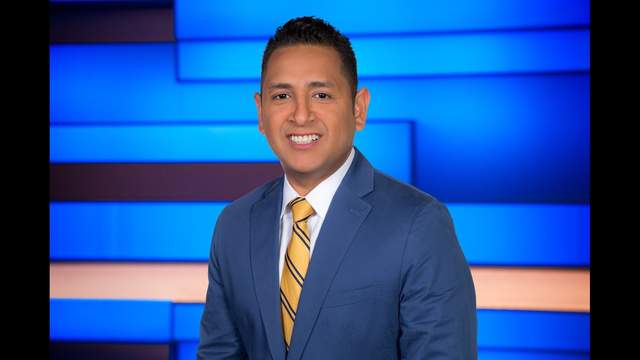 Having been stationed in both Havana and in Little Havana by Miami's WPLG-TV-10-NBC, a fair-minded journalist named Hatzel Vela remains one of the few American journalists courageous enough and competent enough to actually report honestly on U.S.-Cuban Relations. And now -- Friday, Jan. 22nd, 2021 -- Hatzel Vela has the best and most honest update on how the Trump-to-Biden transition in the White House will affect the USA's approach to the Caribbean's largest island. Hatzel Vela, a journalist who knows about such things and is brave enough to tell the truth, penned this update: 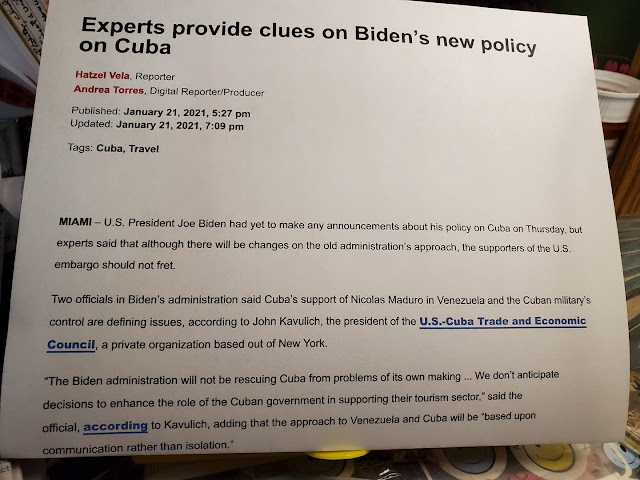 In his first sentence above Hetzel Vela writes: "U. S. President Joe Biden had yet to make any announcements about his policy on Cuba on Thursday, but experts said that although there will be changes on the old administration's approach, the supporters of the U. S. embargo should not fret."
In other words, Hetzel Vela knows that even with a Democrat, Biden, replacing the Republican Trump in the White House, Cuba will not be a top priority for the new U. S. administration. Although Biden spent 8 years as Vice President while President Barack Obama was brave, intelligent, and decent enough to normalize relations with Cuba, Joe Biden is not Barack Obama. In America's two-party political system, every Republican President has been aligned first with the brutal/thieving Batista-Mafia dictatorship that brutalized the island from 1952-1959 and then with the Batista escapees who have ruled Little Havana in Miami since 1959 when the Cuban Revolution evicted them from the island. And thanks to the Bush dynasty that pushed the Havana-born Counter Revolutionary zealot Ileana Ros-Lehtinen from Little Havana to the U. S. Congress for 33 years starting in 1989, a steady stream of Little Havana/Bush-aligned zealots such as Havana-born Lincoln Diaz-Balart, whose father was a top Minister in the Batista dictatorship, have streamed into Congress {including Lincoln's brother Mario} to dictate U. S. policy regarding Cuba, which has been extremely lucrative for Little Havana but also extremely brutal for the masses of Cubans on the island. Among other things, the U.S.-based terror attacks, assassination's, assassination attempts, the 1961 Bay of Pigs military attack, the Embargo since 1962, and the genocidal Blockade orchestrated by the Trump administration all attest to the cowardice of three generations of American citizens who have displayed neither the guts nor the intelligence to object to the thieving and brutal U. S. policy that began in 1898 after the Spanish-American War that was fought in Cuba and then by 1952, also without objections from gutless American citizens, the U. S. democracy teamed with the higher echelon of the Mafia so rich U. S. individuals and companies could partake in the rape and robbery of the luscious island nation, which happened from 1952 till the Cuban Revolution shocked the world by defeating the U.S.-backed/Mafia-backed Batista dictatorship in 1959. Since then, even more SHOCKING than the 1959 victory has been the fact that Revolutionary Cuba, somehow, has remained a sovereign nation for almost seven decades. As Hatzel Vela's article alludes, while the Trump presidency was fully aligned with Little Havana's total dictation of the USA's Cuban policies, don't expect anything too differently during the Biden presidency. You see, while Trump totally agreed with Little Havana using Cuba as a political and economic football and piggybank, expect Biden to be too afraid to question Little Havana's gruesome power. FOR EXAMPLE, in Hetzel Vela's article you will note {as shown below} that the same Little Havana zealot, Marco Rubio, who dictated Trump's Cuban genocide, HAS ALREADY explained that policy to Biden!!! 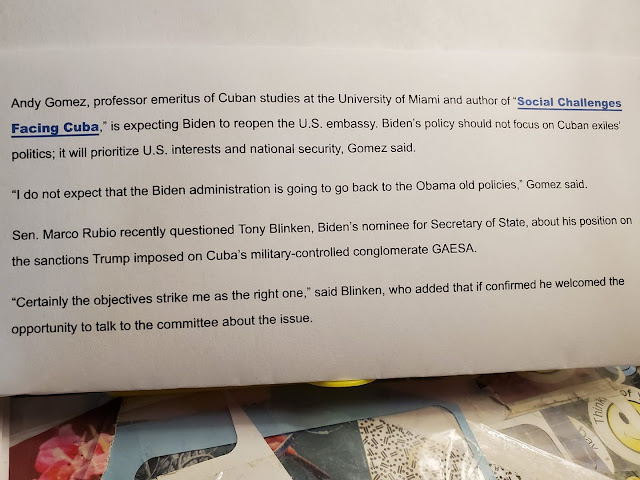 As the brave and insightful Havana-Little Havana journalist and expert Hatzel Vela explains in the above article, Little Havana's Marco Rubio quickly told President Biden's Secretary of State Tony Blinken precisely what Little Havana demands that Biden must do regarding Cuba. 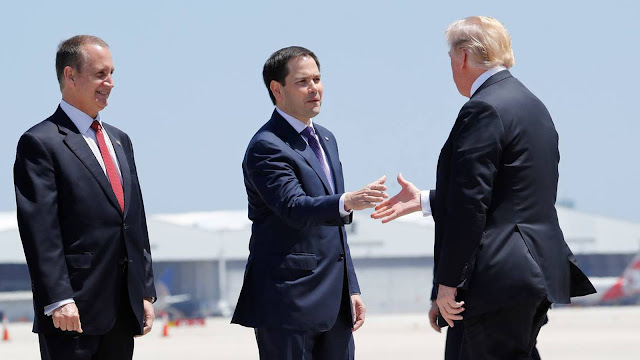 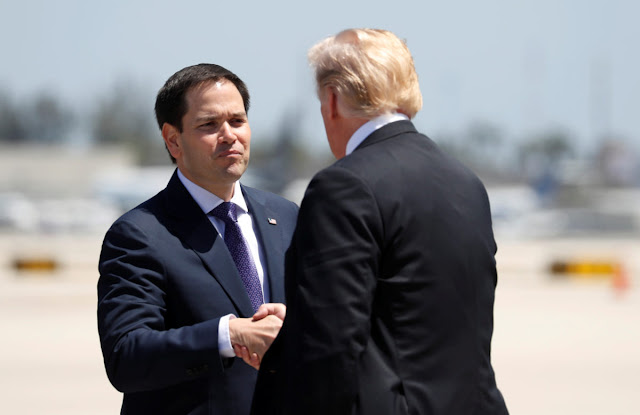 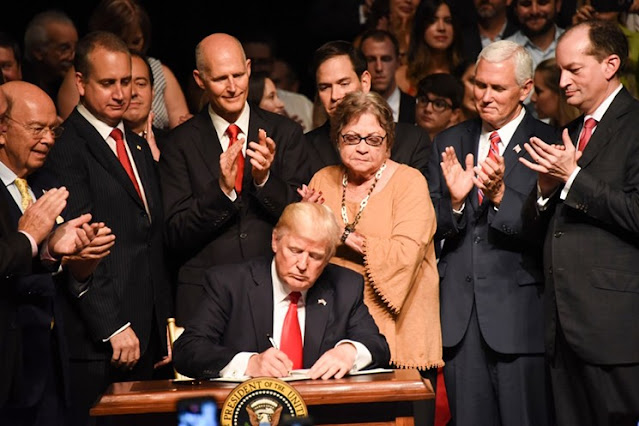 As you can see via the three photos directly above, Trump began his presidency in 2017 by flying to Little Havana and turning over all his Cuban policies to Rubio and Diaz-Balart. Later the Trump handshakes essentially made Rubio the USA's Cuban dictator on U. S. soil. Thus, early in his reign as President Trump went to Little Havana to sign Little Havana-dictated orders with Little Havana zealots and benefactors such as Rubio and Diaz-Balart looking over his shoulders...further legalizing U. S. genocide against Cubans on the island while, of course, further expanding Little Havana's economic and political grip on the USA's Cuban laws and actions. 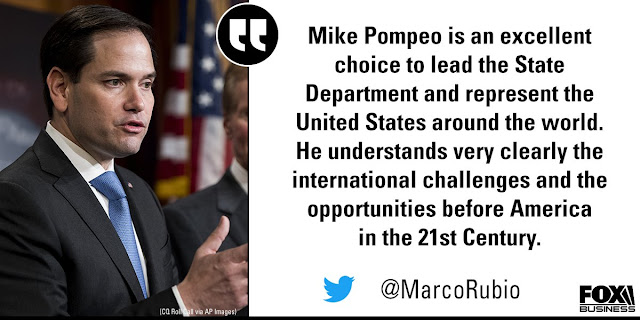 Once he was installed as America's Cuban dictator on U. S. soil by Trump, as shown above Rubio quickly ONLY INTALLED anti-Cuban sycophants such as Mike Pompeo and Mauricio Claver-Carone as the ONLY people who were allowed to make decisions regarding Cuba. Of course, that was the case from January of 2017 until the very last days and hours of Trump's presidency in January of 2021 when Rubio's anointed Secretary of State, Mr. Pompeo, was still announcing new genocidal sanctions against Cubans on the island. 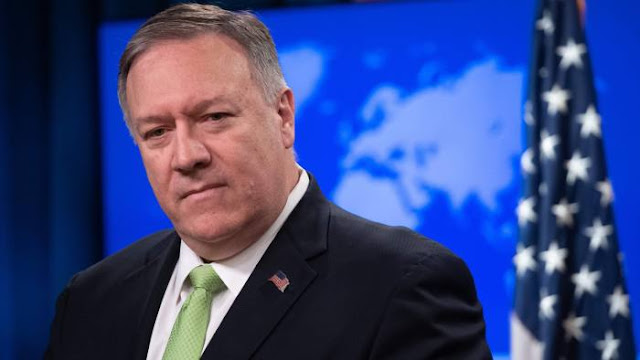 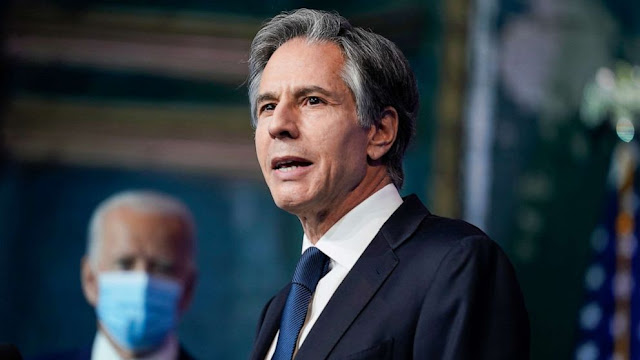 And so, as anointed by Rubio, Mike Pompeo was Donald Trump's Secretary of State and never once did Pompeo vary from Rubio's austere and brutal decisions pertaining to Cuba. And as the brave and excellent journalist Hatzel Vela reports above, Rubio has already gone face-to-face with Tony Blinken, President Biden's new Secretary of State. In other words, it appears that Blinken has already gotten his marching order regarding Cuba from Little Havana. 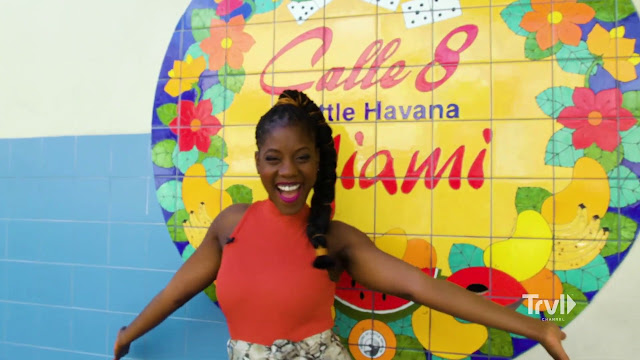 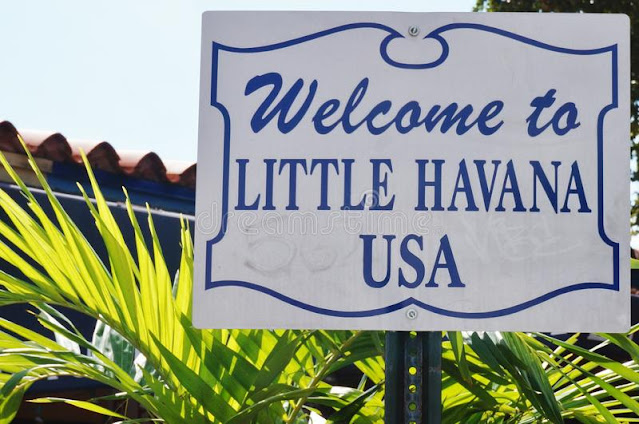