Punching Above Its Weight

Cuba On The World Stage!!

Meet David Asman. He is a liar and propagandist. Unfortunately, he now epitomizes what the mainstream media -- both the print and electronic media -- in the United States has become: A vast saturation of Liars and PROPAGANDISTS masquerading as journalists. David Asman is the host on the Fox Network's "Bulls & Bears" business program. Today -- on December 27th, 2019 -- Asman was one of the typical propagandist panelists on a regular Fox "news" hour -- the kind of "journalists" that sadly now dominate America's television networks that are not obviously no longer concerned with hiring real journalists and letting them gather and dispense real news. Instead people like Asman -- both anchors and the ubiquitous and obnoxious pundits -- are ordered and programmed to provide either left-wing or right-wing propaganda, depending on the political or social persuasions of the ultra-rich network owners, which include either individual multi-billionaires or even corporations worth trillions of dollars. Thus, typically today Asman was just one propagandist pundit on a crowded network surrounded by other pundits dispensing obnoxious punditry. Asman has a fixation on Cuba and, although the discussion wasn't at all about Cuba, he kept getting back to demeaning the island's Revolutionary government. When the discussion evolved into how perfect a nation America is, Asman was inspired to point out that Revolutionary Cuba is the worst nation in the whole world: "When I go to Cuba I see the elites eating on crystal china and the everyday Cubans starving...!!!!!!!" -- or something to that effect. Asman today, as usual, was implying that Revolutionary Cuba is simply the worst nation in the world and Asman was implying that the U.S.-backed Batista-Mafia dictatorship that preceded Revolutionary Cuba was the best government in the world -- a refrain that has been promoted to define the Cuban narrative in the U. S. since the Cuban Revolution overthrew U. S. domination way back in 1959. So, Asman on Fox today was merely a reminder that television network "news" in the United States has now become totally devoid of real journalists while being fully saturated with lying propagandists -- both the anchors and the pundits. Sadly, David Asman, today on Fox, was being nothing more than a lying propagandist, typically of what has replaced real journalists throughout today's U. S. media.

David Asman's performance on Fox today was laughable, of course, because in a punditry discussion that had nothing to do with Cuba he kept returning to defiling Revolutionary Cuba even though the other pundits on the "news" panel were eager and programmed to lie about their own propaganda topics. But David Asman's weird lies about Cuba pointed out one fact: THE ISLAND OF CUBA SINCE THE TRIUMPH OF THE CUBAN REVOLUTION ON JANUARY 1-1959 HAS VASTLY PUNCHED ABOVE ITS WEIGHT ON THE WORLD STAGE.  Otherwise the propaganda punditry today on Fox would never had injected little Cuba to the forefront. And that fact about Cuba is also amply amplified by the fact that, EVERYDAY since January 1-1959, the strongest nation in the world has tried its damnnest to recapture the pugnacious island. 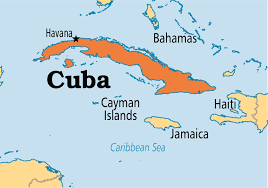