This past weekend on the island of Cuba the 60th anniversary of the founding of Radio Rebelde was celebrated. And such celebrations are appropriate because it played a...or perhaps the...major role in the incredible triumph of the Cuban Revolution on January 1, 1959. And, remarkably, to this day in the last week of February, 2018, it still plays a huge role in the survival of Revolutionary Cuba.
If you discount the above paragraph, then I suggest you do not know much about the history of the Cuban Revolution that has defined the remarkable sovereignty of Cuba while also redefining the imperial history of both Spain and the United States. Radio Rebelde was founded on Feb. 24-1958 by the most iconic of rebels -- Che Guevara, the young Argentine doctor who decided Cuba needed an anti-Batista revolution. At a crucial stage in the revolutionary war, Che secured a ham transmitter and then boldly recruited two technicians, two announcers, and two reporters from Havana's top station, Radio Mambi. At the time Dictator Batista still controlled all broadcast stations across the island...and still had the financial and military support of America and the Mafia. But beginning in 1958 the rebels were capturing key towns in southeast Cuba, holding those towns, and then moving on in that manner toward Havana on the island's northwestern tip. But Che, whom even his critics admitted had an off-the-chart IQ, knew the rebels needed a major radio outlet to keep the necessary support of the majority peasants, the prime victims of the Batista-Mafia rule and the ones whose support was essential to the rebels. Che knew the much-maligned Cuban peasants needed to know the rebels had a chance against the powerful Batista forces. So Che invented Radio Rebelde to keep the peasants informed about the war from the standpoint of the rebels, countering Batista.
On Feb. 24-1958 Che's brainchild, Rado Rebelde -- Rebel Radio -- blasted on the air with remarkable clarity and powerful reach. The first historic words were: "Here is Radio Rebelde, the voice of the Sierra Maestra, transmitting for all Cuba on the 20 meter band at 5 PM and 9 PM daily. I'm Station Director Caption Luis Orlando Rodriguez." The almost instant feed-back, reinvigorating the peasants, surprised even Che. He as well as other top rebels such as Celia Sanchez often spoke to the vital Cuban population about the progress of the war. Che and Celia had one basic rule: "Now that we can reach the people, and Batista, try as he might, can't stop us, we must NEVER LIE TO THE PEOPLE. Whether it's good or bad news in the war, we must tell them the truth and NEVER LIE to them." The location of Radio Rebelde at that time was a remote and well-protected spot at Altos de Conrado. But quickly, 32 smaller stations had sprung out from Radio Rebelde to round out the Liberty Network that the Cuban citizens trusted and therefore they began to realize that, despite overwhelming odds, the rebels COULD win against the combined might of the U.S.-backed Batista.
Throughout 1958 Radio Rebelde truthfully informed the Cuban population about the progress of the war, always reminding them of the latest town the rebels had captured and was holding...assuring the people that they could enter those towns and see for themselves. As 1958 was drawing to a close, and as the rebels were moving closer-and-closer to Havana, the frantic Batista forces could not destroy Radio Rebelde. Moreover, the Cuban population came to totally agree in the veracity of the Radio Rebelde updates on the war...and so did Batista's henchmen in Havana. 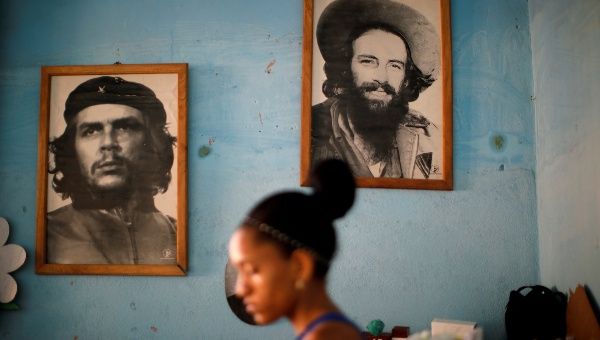 At the start of December in 1958, Fidel Castro and Celia Sanchez were still in charge of rebel units protecting vitally captured Cuban soil in the foothills of the Sierra Maestra Mountains and the vital towns and cities in the vicinity of Santiago, Cuba's second largest city. The rebel force led by Che Guevara and Camilo Cienfuegos throughout December-1958 were routinely defeating larger and better-armed Batista forces, capturing town-after-town. By the time Che and Camilo were on the outskirts of Santa Clara, the last major city leading to Havana, the Batista and Mafia leaders were packing their getaway planes, ships, and boats with cash, gold, and other key assets they had not already shipped off the island. The Battle of Santa Clara was raging even as Batista on Radio Mamba and with telegraphs to Washington was saying, "Everything is fine. The rebels are being annihilated in Santa Clara." Just minutes before midnight on New Years Day -- Jan. 1, 1959 -- word reached Havana that Che & Camilo had captured Santa Clara and "were racing hellbent toward Havana hoping to capture Batista and all Mafia leaders in the Cuban capital city!!" From midnight till 3:00 A.M. on Jan. 1-1959 the last of the Batista-Mafia leaders had fled Havana, with Batista first flying to the Dominican Republic that was ruled by brutal pro-American and anti-Castro dictator Rafael Trujillo. But within days much of the Batistiano leadership and loot had overwhelmed Miami's economic and political structures -- and six decades later that, of course, STILL remains the case. 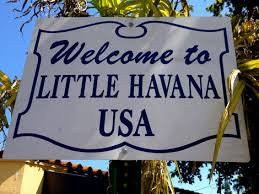 And so, six decades after the triumph of the Cuban Revolution on Jan. 1-1959, Little Havana USA is located in the heart of Miami, Florida -- on U. S. but not on Cuban soil. 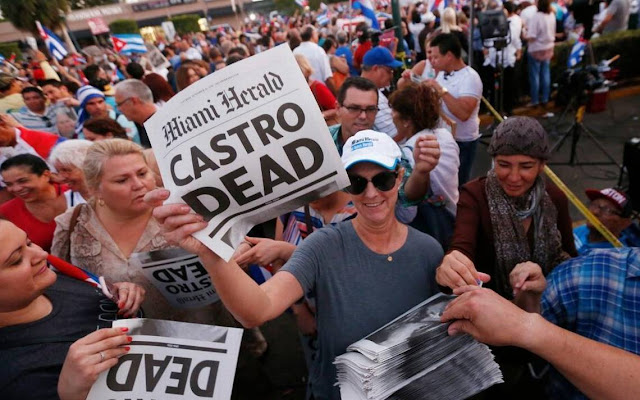 The photo above shows wild celebrations in Little Havana USA on Nov. 26-2016 just hours after the death at age 90 of Fidel Castro in Havana, Cuba. Such euphoria in Little Havana on that day was a vivid reminder that Cuban hardliners headquartered in Miami and Washington had been unable to recapture Cuba despite the backing of the U. S. treasury and the U. S. military. As a matter of fact, that phenomenon created many historic undemocratic records...including what the Guinness Book of World Records calls 638 assassination attempts against Fidel Castro. Despite that record surviving assassinations, Fidel Castro died of natural causes at age 90 in Old Havana.

Meanwhile, Radio Rebelde today is a 24-hour operation that employs 274 Cubans and reaches all of Cuba's 14 provinces. Its news, weather, sports, and live talk shows are still trusted by the Cuban people whose input is essential to its success. Radio Rebelde is often used by individual citizens and groups to voice successful criticism and critiques of their revolutionary government although not to rebel against it.

Since 1959 the Cuban narrative in the United States of America has almost exclusively been the private domain of anti-Castro Counter Revolutionary extremists such as but certainly not restricted to firebrands like Humberto Fontana. In his tirade above on the Fox News network, Mr. Fontana is trying to convince Americans that "the U. S. Cuban embargo has worked like a charm." In one sense, of course, it has. DE-classified U. S. documents prove that the embargo began in 1962 for the purpose of starving, depriving, and making miserable the lives of everyday Cubans on the island to induce them to rise up and overthrow their government. Since 1962 many millions of innocent Cubans on the island have therefore suffered mightily from that cruel and very real premise. So Fontana is right in that the embargo from 1962 till today has hurt millions of Cubans and also garnered a 191-to-ZERO condemnation of the United States in the United Nations. Of course, the second purpose of the embargo has failed miserably because it has not yet overturned Cuba's revolutionary government as it has sought to do from 1962 till this very day.

Now read the image above as Counter Revolutionary stalwart Humberto Fontana uses the vast Fox News airways and other venues to proclaim: "You guys don't have a freakin' clue about Cuba! -- Read my books." In other words, I'm sure Humberto would think that I didn't have a "freakin' clue" about anything I said about the 60th anniversary on Feb. 24-2018 of Radio Rebelde. Well, uh, Humberto, I'm sure even if we don't buy your books that you will tell us all about Cuba -- TRUE AND UNBIASED, OF COURSE. And while you're at it, Humberto, explain to us why the tiny and vulnerable Cuban flag still flies over Revolutionary Cuba. We need to know.