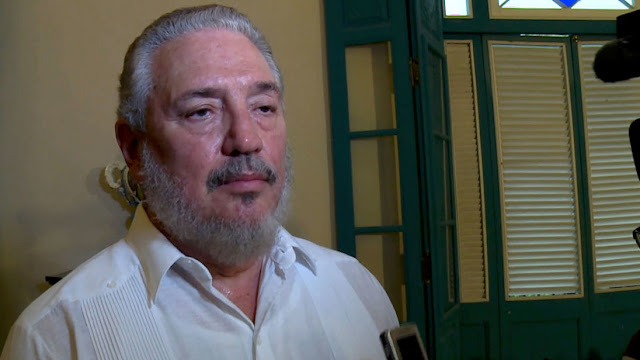 This week -- February 1, 2018 -- the body of Fidel Angel Castro Diaz-Balart was found at the Seguridad Clinic in Havana where he was being treated for depression. Known as Fidelito, he was 68-years-old. The cause of death is listed as suicide. Since the death of his father at age 90 on Nov. 25-2016, it was known on the island that Fidelito was particularly depressed and he had been in treatment for months. 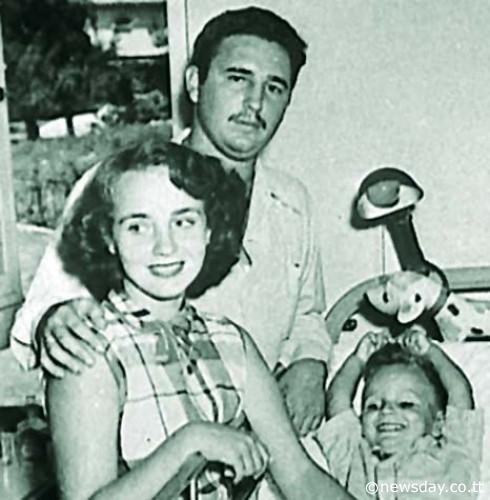 Fidelito was born on Sept. 1, 1949. His mother, Mirta Diaz-Balart, was married to Fidel from 1948 till 1955. Mirta was the sister of one of Fidel's Law School classmates Rafael Diaz-Balart, who was a Minister in the Batista dictatorship that had captured and imprisoned Fidel from July of 1953 till May of 1955. After Fidel's Cuban Revolution overthrew the Batista dictatorship on Jan. 1-1959, Rafael became one of South Florida's richest and most fervent Counter Revolutionaires, actually creating The White Rose as the first anti-Castro paramilitary unit on U. S. soil, and two of Rafael Diaz-Balart's sons, Lincoln and Mario, were elected to the U. S. Congress from Miami. But through it all, Mirta Diaz-Balart -- who lost a custody battle for Fidelito to Fidel -- dearly loved Cuba and was close to her former family and Fidel's second wife Dalia. 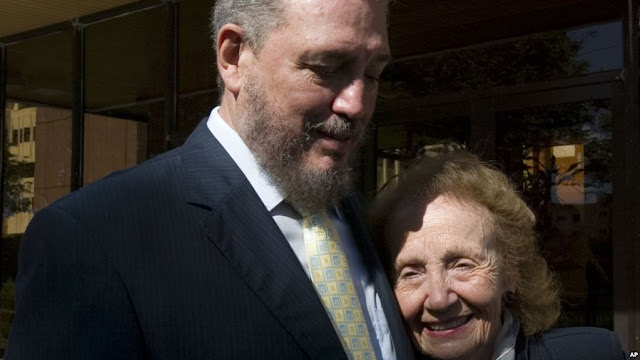 Born on Sept. 30, 1928 in Banes, Cuba, Mirta is now 89-years-old. She is shown above with Fidelito. Mirta remarried after divorcing Fidel in 1955 and lived off the island. But a home was maintained for her in Havana because she frequently visited Fidelito and he in turn took her to visit his father during Fidel's long illness. 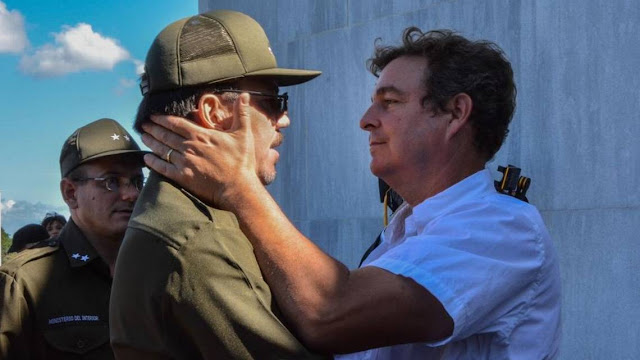 The death of Fidel Castro on Nov. 25-2016 still grips the island. The photo above shows on the left Alejandro Castro, the son of Raul Castro, commiserating with Antonio Castro, one of Fidel's five sons with his second wife Dalia Soto del Valle. It was Antonio Castro, a medical doctor, who begged Fidelito to seek treatments for his depression and both Antonio and Alejandro also tried to keep Fidelito from constantly reading about Fidel and from visiting his father's final resting place. 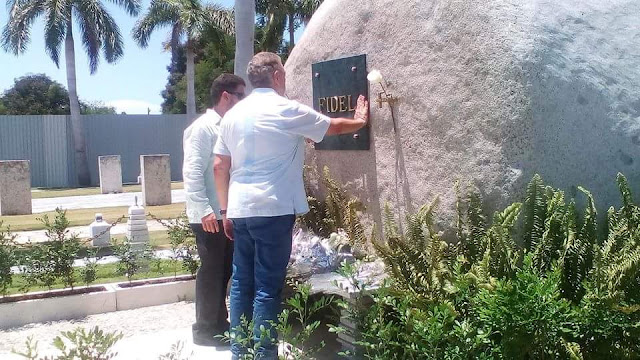 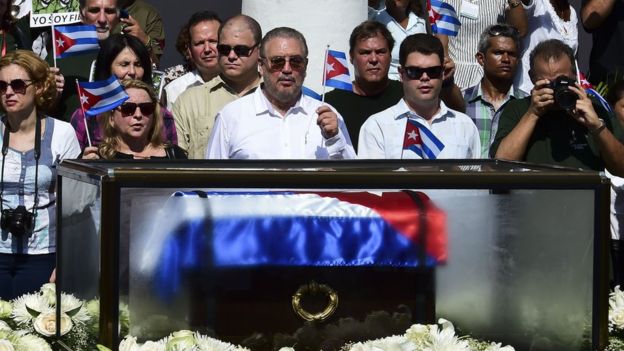 After Fidel's death at age 90 on November 25th, 2016, this AFP photo shows Fidelito -- Little Fidel -- on the sad day he watched the urn holding his father's ashes pass slowly by. That's Fidelito in the middle holding the Cuban flag high. Standing shoulder-to-shoulder to Fidelito's left is his son Fidel Antonio Castro. 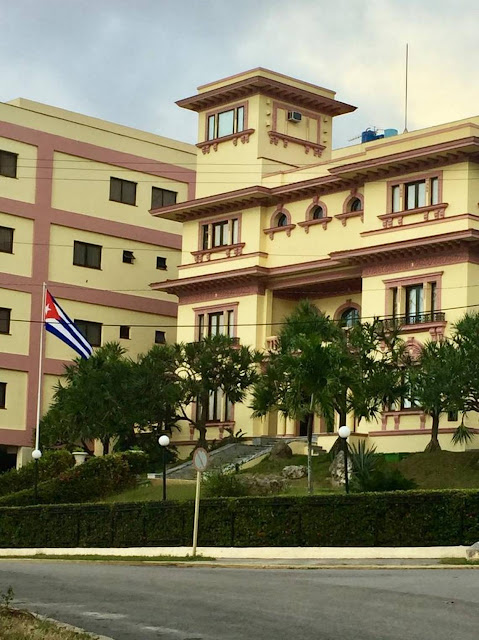 The Seguridad Clinic where Fidelito died. 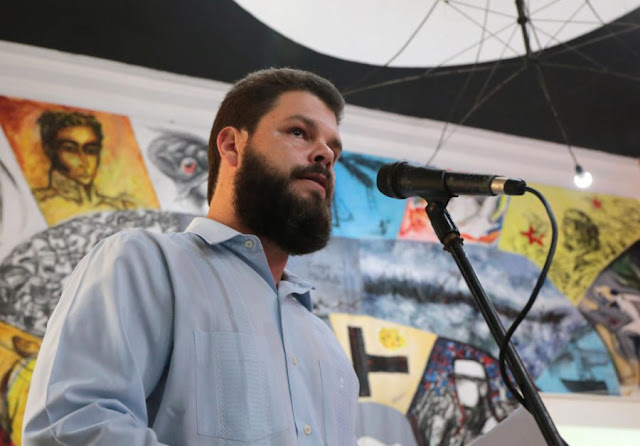 The official family statement regarding Fidelito's death was issued by his son Fidel Antonio. It asked for "privacy for my family members at this sad time." 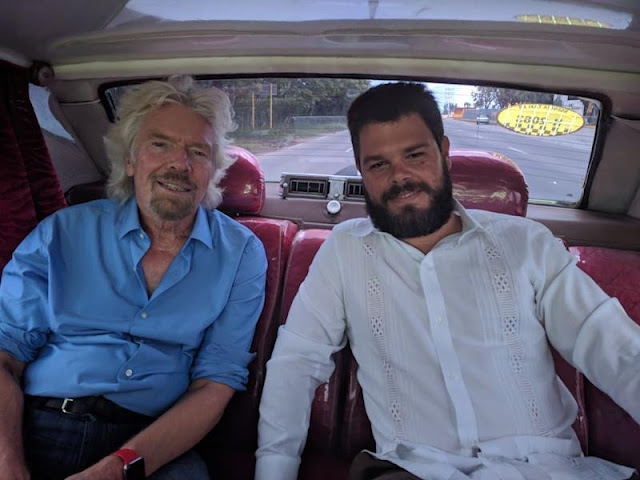 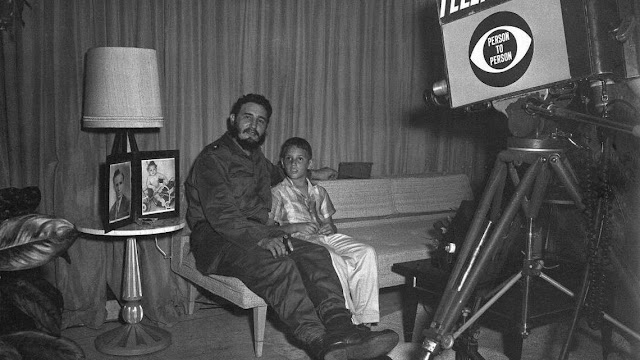 This AP photo shows Fidel and Fidelito on a very happy occasion. It was shortly after the January 1, 1959 triumph of the Cuban Revolution, which shocked the world then and now. The great United States broadcaster Edward R. Murrow interviewed Fidel on the popular American CBS-TV program Person to Person. Speaking English, Fidel included Fidelito in the American broadcast. 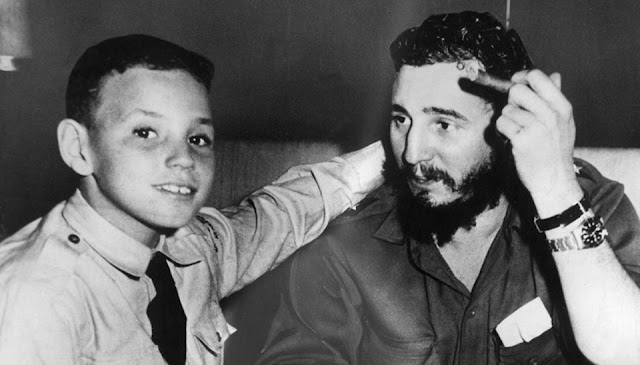 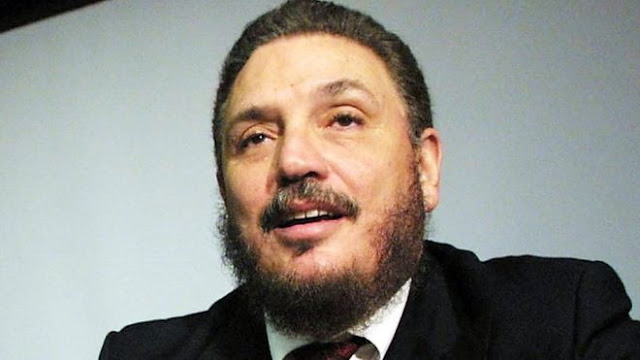 A nuclear physicist, Fidelito was married twice. He had three children, and their first names are Fidel, Mirta, and Jose. At the time of his death, he was an adviser to the Cuban Council of State and Vice President of Cuba's Academy of Sciences. 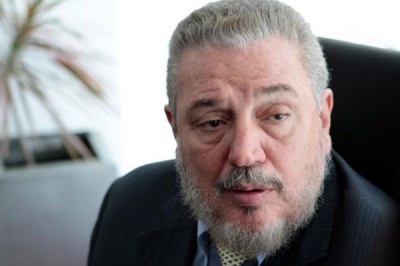