On 1st Anniversary of Fidel's Death: 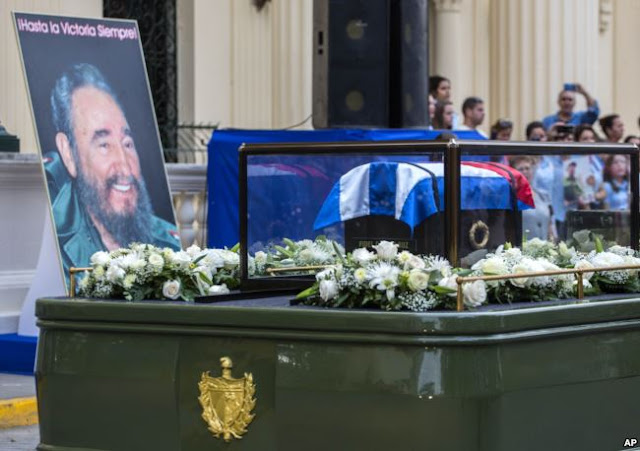 The Voice of America, one of my prime international news sources, this weekend reviewed the life of Fidel Castro, the Cuban revolutionary who drastically changed Cuba and America during his incomparable 90 years on this earth. The VOA used the photo above to illustrate its recap of Fidel Castro's imprint on history to mark the one-year anniversary of the death of the Cuban legend at age 90 on Nov. 25-2016. Its review is entitled: "Cuba Marks First Anniversary of the Death of Fidel Castro" and the report is mostly fair on the multiple VOA venues that include its printed form as well as its radio and television outlets. The video runs 3 minutes and 15 seconds and is included with the printed report on the VOA's informative international website. 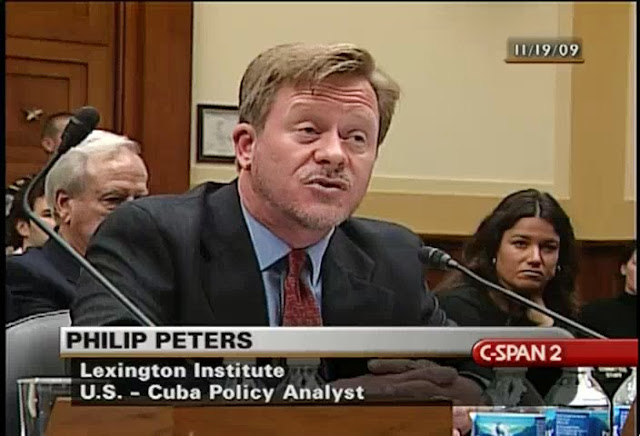 The Voice of America TV-video report on Nov. 25-2017 recapping Fidel Castro's life includes a long statement by Phil Peters, truly one of America's most renowned Cuban experts. Mr. Peters said: "I think all admit Fidel Castro is a very historical figure who won a very impressive military victory in the Cuban Revolution. He maneuvered through very difficult circumstances in the international sphere. He put Cuba on the map far beyond its importance in history and far beyond its economic capabilities." 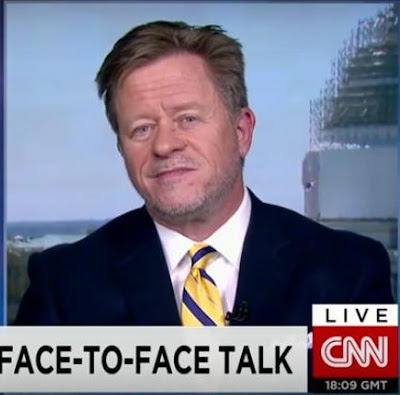 While there are many notable and fair-minded U. S. Cuban experts like Phil Peters, since Fidel Castro's Cuban Revolution in 1959 chased the U.S.-backed Batista-Mafia dictatorship back to Florida from whence it had emerged in 1952, Fidel and his historic significance has impacted the United States every bit as much as it has impacted Cuba itself. That's because, as Mr. Peters knows, the reconstituted Batistianos-Mafiosi on U. S. soil, since 1959, have largely dictated America's Cuban policy that is widely condemned in unanimity by the United Nations and was even condemned by the decent Obama administration in 2016, resulting in the 191-to-Zero condemnation of all the voting nations in the UN. Yet, as Phil Peters and all other unbiased American experts well know, America's Batistiano-driven Cuban policy since 1959 has seen the vaunted U. S. democracy tied indelibly to such unsavory, undemocratic warts as...record numbers of tax-supported assassination attempts beginning in 1959; the expensive but miserably failed Bay of Pigs attack on Cuba in 1961; the longest and cruelest {from 1962 till today} economic embargo ever imposed by a strong nation against a weak nation; and even such things as the terrorist bombing of a child-laden civilian Cuban airplane that will forever be tied to a famed tax-paid career Cuban-American terrorist that at age 90 is still living a free and heralded existence in Miami. While a renowned American expert like Phil Peters minutely could recap such things, propagandized Americans since 1959 are supposed to be too afraid or too ignorant to do so. Therefore when the Voice of America's recap of Fidel Castro's life includes a long quote by Mr. Peters, the VOA on Nov. 25-2017 is acting fairly and bravely regarding Cuba, which is a rare circumstance indeed for any American enterprise. 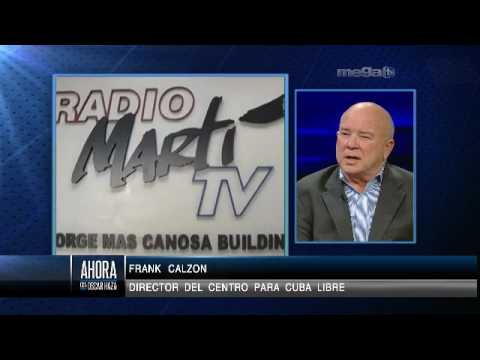 Right after the unbiased Cuban expert Phil Peters made his statement about Fidel Castro in that Voice of America telecast, the VOA aired the opinions of Frank Calzon. Calzon began his depiction of Fidel Castro with these words: "Whatever good he did..." They were, actually, four amazing words because Frank Calzon is a Charter Member of the vast, well-funded anti-Castro propaganda machine that has existed in the United States almost unhindered since 1959. The graphic above depicts Calzon in the plush Miami studios of Radio Marti TV, which is located in Miami in the plush Jorge Mas Canosa building. Calzon, Canosa, and almost all of the richest and most powerful Counter Revolutionary anti-Castro zealots in the United States were and are indelibly entwined with the BUSH economic and political dynasty. The Bush-anointed Canosa was the all-time most powerful anti-Castro Cuban-American exile and the first true billionaire. For example, since the 1980s, thanks to Canosa's Bush-connections, billions of U. S. tax dollars have flowed and are flowing to the Radio Marti TV boondoggle that is just one of the many Canosa products in Miami, along with numerous buildings, etc., named in his honor. So it's fitting, as depicted above, that Frank Calzon, another of the ultra-powerful Bush-connected anti-Castro/Cuban American propagandists, is shown in a Radio Marti TV-Canosa Building graphic.

As I pointed out, Frank Calzon's first four words about Fidel Castro in the VOA television report were: "Whatever good he did..." The rest of Calzon's words were pure anti-Castro propaganda, the kind that have, since 1959, made Counter Revolutionaries like Frank Calzon very rich and very powerful and very much unchecked in a Batistiano-fueled United States. And that's precisely why Frank Calzon, and many others like him, convince me that Fidel Castro and his Cuban Revolution say A LOT MORE about the United States than those two historic legends say about Cuba itself. Cuba, after all, is just a Caribbean island while the United States, so drastically altered by the Cuban Revolution and by the decades of trying to regain dominance over the pugnacious island, is the world's economic and military Superpower. That being said, even when he is given airtime by the Voice of America, Frank Calzon can't explain why Revolutionary Cuba has survived for all these many decades and neither can Frank Calzon justify America's cruel Cuban policy that propagandists like Frank Calzon are largely responsible for. And, of course, Frank Calzon and his ilk ignore two vital facts: {1} The harm the Batistiano-fueled Cuban policy does to America's and Democracy's reputations; and {2} the international condemnation of that Batistiano-fueled Cuban policy. With his opening four words to the Voice of America on Nov. 25-2017, Mr. Calzon admitted that Fidel Castro had done some "good." But frankly, as a democracy-loving American, I can't think of a single good thing that Counter Revolutionary Cuban-Americans like Frank Calzon have ever done for my America. 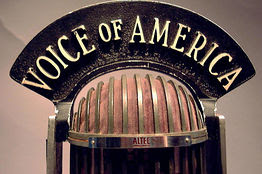 The legendary Voice of America. 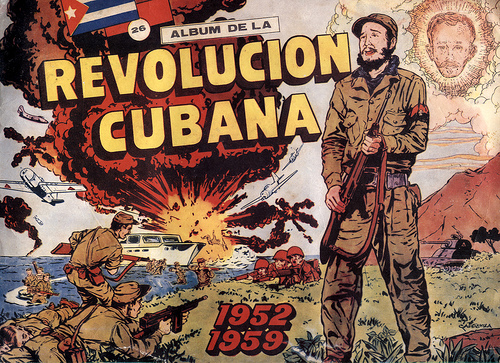