By far the most-watched news program in America is NBC Nightly News with Lester Holt. It airs for a half-hour beginning at 6:30 P. M. each night and easily garners more viewers than the combined totals of the three obnoxious and Talking Head-obsessed cable operations -- CNN, Fox, and MSNBC. But even the three highly once-respected over-the-air news operations -- NBC, CBS and ABC -- have evolved into nothing more and nothing less than powerful propaganda outlets that would make dangerously effective propagandists like Goebbels in the 1930s and 1940s green with envy. It would also, I believe, cause America's renowned Founding Fathers to hide their faces in absolute shame because the remarkable democracy they crafted featured as one of its prime pillars a free, unbiased and informative media. 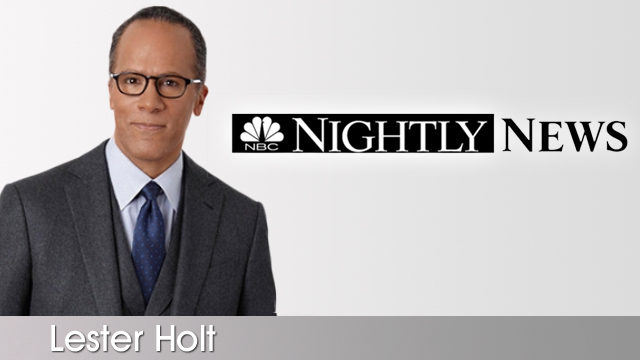 Lester Holt is a superb broadcast journalist and I am sure it pains him...I know it pains me...that his corporate bosses at NBC apparently force him to dispense propaganda on a regular basis, which is par-for-the-course in the mainstream media these days. This week -- Thursday, Sept. 30th-2016 -- Lester Holt typically used valuable time {minus commercials he has only about 22 minutes} on repetitive off-the-wall propaganda against Donald Trump's presidential bid. Please understand that I am not pro-Trump and in fact do not believe he is qualified to be President. But I believe that a news media evolving strictly into a giant, effusive propaganda machine is far more of a threat to the U. S. democracy than Mr. Trump will ever be. Thursday on NBC's Nightly News Mr. Holt stressed some weird charge about Trump "violating America's Cuban laws" many years ago. The media is not allowed to point out that such laws resulted from the sheer fact that the transplanted Batistiano-Mafiosi cabal has been unable, even with the help of the U. S. treasury and military, to recapture the island of Cuba despite its unchecked ability to make such laws. So Lester Holt introduced some off-the-wall character who bellowed that, "You can't go to Cuba and buy a bottle of soda," meaning legally according to archaic Cold War U. S. laws opposed by the entire world, including most Cubans in Miami. Of course, Lester Holt wasn't allowed to put someone on that might espouse a different and more sane opinion about buying a bottle of soda in Cuba. In other words, since 1959 Americans have been force-fed steady steams of unchallenged Cuban propaganda but only recently have major influential networks like NBC and respected journalists like Lester Holt been required to partake in the anti-democratic skull-duggery. Anti-Cuban propaganda this week merged with anti-Trump propaganda. 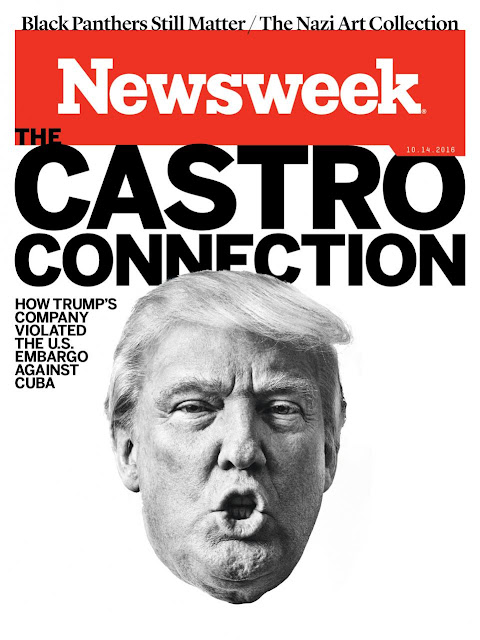 Check out this week's propaganda-riddled Newsweek cover that blares the GARGUANTAN headline: "TRUMP CONNECTION: How Trump's Company Violated The U. S. Embargo Against Cuba." Wow!! Oh, my!! What did he do? Did someone remember that Trump bought a soda in Havana twenty years ago, grossly upsetting the vast Batista-connected and Miami-based Diaz-Balart family that includes NBC anchor Jose Diaz-Balart whose father was a Batista minister? CNN and other corporate-owned propaganda outlets jumped on this Newsweek propaganda smear massively yesterday, ignoring legitimate news events. HEY, AMERICA!! BREAKING NEWS!! "I'm Don Lemon, your host on CNN for the next hour. Stay with us because we will use every minute to tell you why Donald Trump is the worst human that has ever lived and if he is elected President the U. S. will cease to exist as will the rest of the entire world. And we will use this entire hour to explain to you -- with our massive stable of Talking Heads -- why Hillary Clinton was 100% correct when she said the only people who support Trump are 'irredeemable baskets of deplorables,' meaning stupid and uneducated white people. We have just learned that one of those irredeemable deplorables has just been spotted at a Trump rally with a Confederate flag, proving the point yet again that Trump is the worse human in history. After that Breaking News, let me turn to my left to Bakari Sellers, the young black lawyer from South Carolina who will explain to our audience why Trump is the worst human in the history of the entire world and why the only racists in the entire world are the irredeemable and deplorable white people like the Trump supporters. Bakari, take as long as needed because your expert and unbiased expertise on those two topics are why CNN hired you as a ubiquitous Talking Head." "Uh, thank you, Don. Yes, that irredeemable, deplorable, white racist with the Confederate flag proves Trump is..." 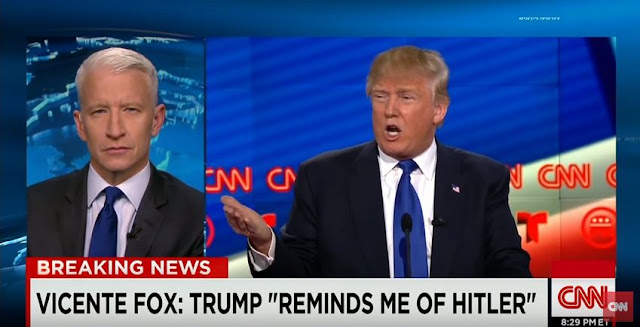 As with Lester Holt at NBC, CNN's best broadcast journalist, Anderson Cooper, seems compelled to follow the corporate line in dispensing one-sided, anti-Trump propaganda. The fact that the networks do this hour-after-hour, day-after-day would be hilarious and even funny if it were not so deleterious to America and to Democracy. The graphic above is an example. In that particular broadcast, instead of providing real news or even informative information for voters, CNN dominated Anderson Cooper's prime-time hour with a Mexican's incessant tirades against Trump -- "REMINDS ME OF HITLER." There are, of course, some decent and non-racist Americans who don't believe Trump "reminds them of Hitler but it seems that the U. S. media doesn't cover that side of the equation. It is also interesting to note, I believe, that Lester Holt hosted the first Trump-Clinton debate this week and guess who will host the next one -- Anderson Cooper. Thus Holt peppered Trump with nauseous questions about birther issues and a long-ago Hispanic Miss Universe that Trump allegedly insulted, but no questions for Clinton about naughty little tidbits like her controversial emails, financial ties to countless Wall Street and foreign billionaires, etc. 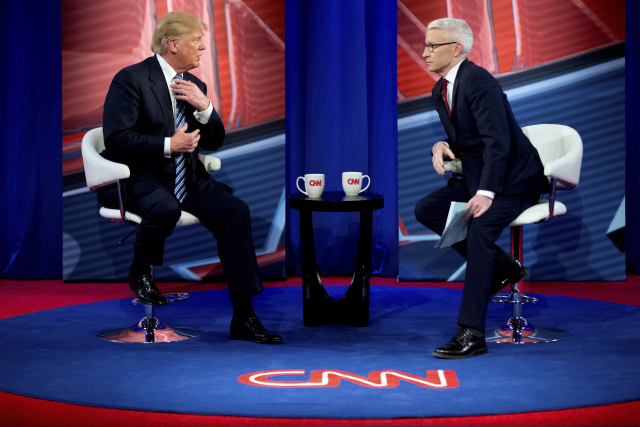 With Anderson Cooper the host of the next Trump-Clinton debate, I'm wondering what Cooper's first question will be. For democracy's sake and for America's sake around the world, I sincerely hope it's not akin to this: "Mr. Trump, you have the first question tonight. As your distinguished opponent, Mrs. Clinton, said, the only supporters you have are irredeemable, stupid, uneducated, and racist white people that we intelligent and informed people do not think should even be allowed to vote. Now the first question is, Mr. Trump...how ashamed are you that not a single intelligent, educated and non-racist American will ever vote for you?" 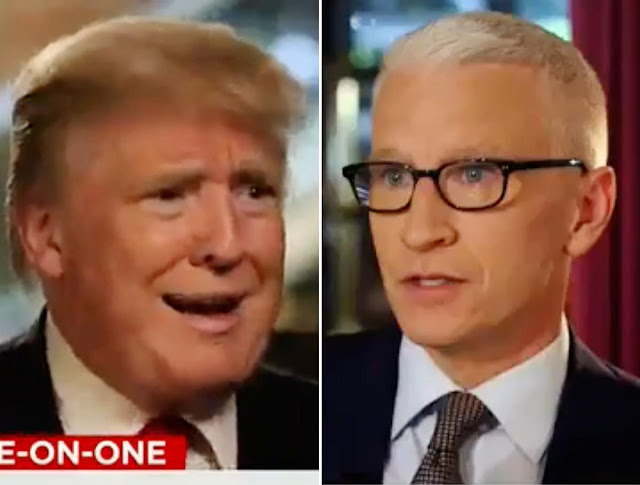 Donald Trump vs. Anderson Cooper.
Even more important than the upcoming presidential election in the United States, I think, are the parameters surrounding it, especially the incredibly undemocratic aspects that have overtaken the process that has dramatic impacts on America, democracy, Cuba, and the entire world. The individual and corporate billionaires who own the mainstream media in the U. S. firmly believe they, not the individual voters, should own the democracy bequeathed to all Americans by the Founding Fathers back in 1776. The last of the checks-and-balances designed to preserve it fell in 2010 when the U. S. Supreme Court sanctioned unlimited billionaire donations for political campaigns. And now the best potential politicians don't even bother to participate in a bought-and-paid-for menagerie. A ubiquitous off-shoot of all that is the sheer fact that a vast majority of Americans disapprove of both candidates -- Trump and Clinton. This 2016 presidential campaign, as well as congressional races beneath it, reflect the cancerous results of a handful of billionaires purchasing America's democracy, such as the billionaires who own all of the mainstream media that is now nothing more and nothing less than one huge propaganda machine for those billionaires. I think Lester Holt and Anderson Cooper are aware of this situation, but have succumbed to it.
And lastly: 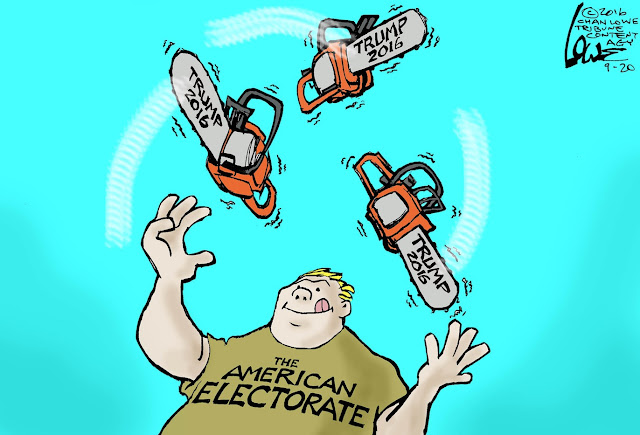 The last honorable bastion for the United States media remains the great Editorial Cartoonists. This gem is by Chan Lowe whose artistry is widely distributed by Tribune Content Agency. Study it and judge it for yourself. Even with billionaires legally purchasing our democracy, we can still have opinions...I hope.