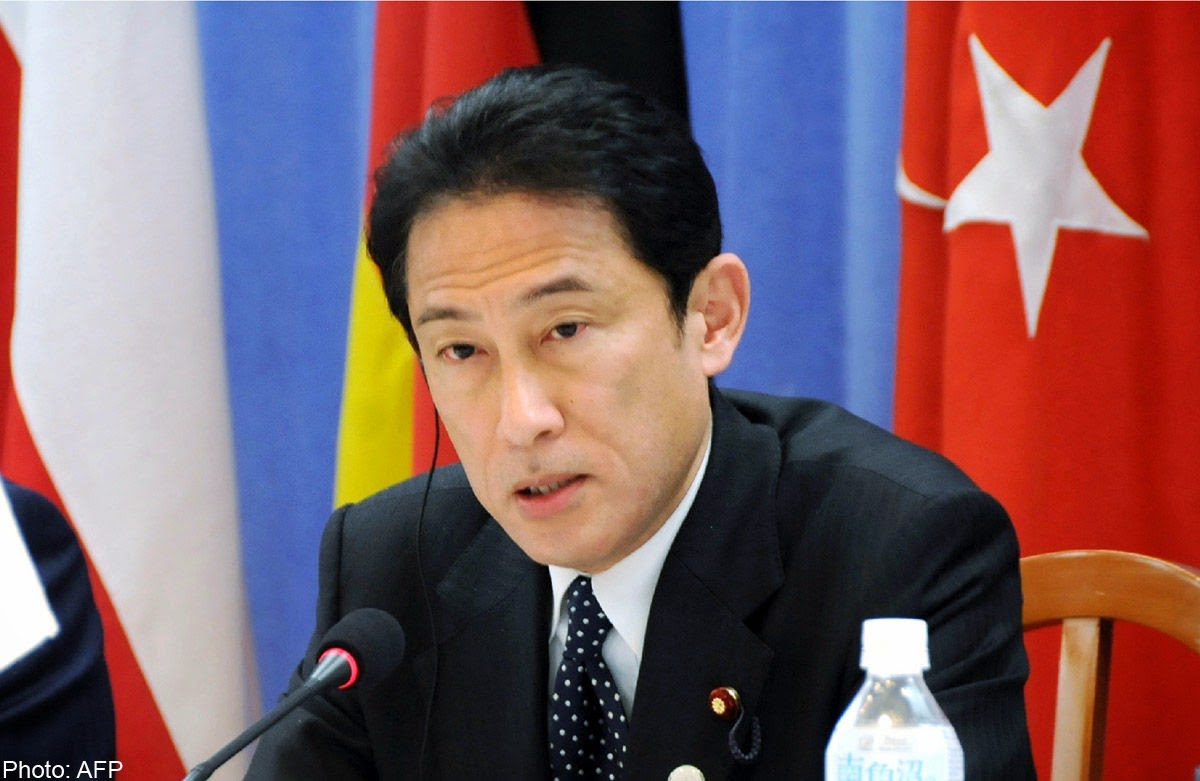 Fumio Kishida is the Foreign Minister of Japan. This week he requested permission to visit Cuba in April. Japan is interested in investments in Cuba, particularly regarding infrastructure projects and mineral resource development. Japan's significant overture is a product of America's ongoing attempt to normalize relations with Cuba, at least in regards to easing or ending the embargo that has been in place since 1962. Because of the U. S. status as the world's economic and military superpower, nations such as Japan have capitulated to U. S. influence when it comes to Cuba. Miami Cubans have taken full advantage of that fact to dictate to the U. S. Congress and to foreign nations that any positive actions regarding Cuba are strictly verboten. President Obama's bold and sane overtures toward Cuba are now being reciprocated by other key nations, including Japan. Of course, such positive developments spawn vicious reactions from Miami Cubans who believe they alone should dictate U.S.-Cuban relations. 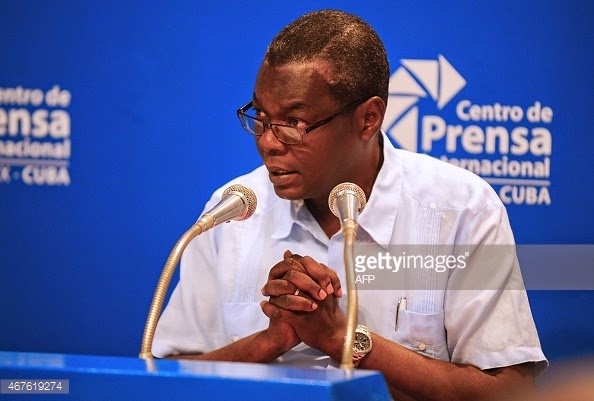 This is Pedro Luis Pedroso, one of the rising stars in Cuba. He already has an impressive title: Deputy Director for Multilateral Affairs and International Law. This week -- Thursday, March 26th -- Pedroso announced that Cuban diplomats will in Washington Tuesday to discuss the touchy issue of human rights. He said, "These conversations about human rights show that Cuba is ready to discuss any topic with the U. S., despite our differences, and from a basis of equality. There are different political systems and models for democracy. We live in a plural world and that plurality should apply to the case of Cuba as well." The U. S. wanted the human rights discussion to take place so the process of opening a U. S. embassy in Havana can proceed prior to the April 10th start of the Summit of the Americas in Panama. At Tuesday's session in Washington Pedroso will make sure that Cuba's side of the human rights equation is considered, meaning that Cuba will stress that U. S. funds and actions designed to encourage dissidents on the island "are something that no sovereign nation, including Cuba and the United States, should ever be subjected to." 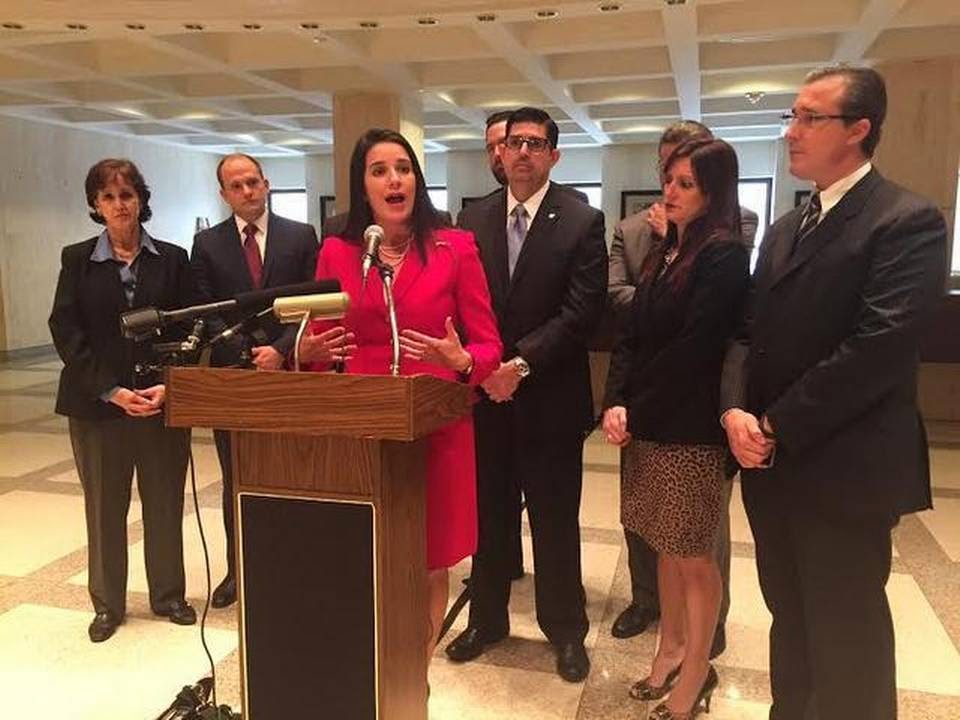 To understand the U.S.-Cuban conundrum in the spring of 2015, one needs to comprehend this Kathleen McGrory/Miami Herald photo that was taken this week in Florida's capital city of Tallahassee. It shows 38-year-old Miami-born Florida State Senator Anitere Flores, supported by other like-minded Republicans, making an impassioned speech in support of a proposal she sponsored to rebuke President Obama's plans to begin the process of normalizing relations with Cuba. Ms. Flores, a University of Florida Law School graduate, represents Miami-Dade County in the Florida Senate. Republican politicians from Miami-Dade continue to defend their decades-old dominance and control of America's Cuban policy. 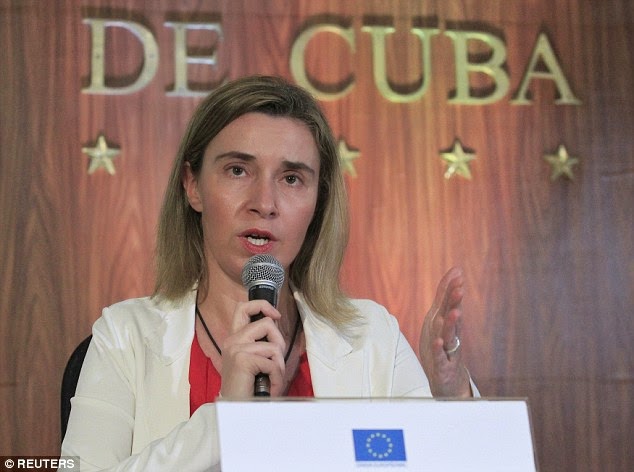 As it happened, the very hour this week -- on March 24th -- that Miami-Dade politician Anitere Flores was holding her volatile news conference in Tallahassee, Florida, this significant lady was holding this much calmer news conference in Havana. She is Federica Mogherini, the European Union's Foreign Policy Chief. On the heels of President Obama's peaceful overtures towards Cuba, Ms. Mogherini is trying real hard to normalize relations between the 28-nation European Union and Cuba. She will even represent the EU next month at the Summit of the Americas in Panama where Cuban President Raul Castro and American President Barack Obama will be featured. In Havana this week Ms. Mogherini began her news conference with these words: "We decided to speed up the rhythm of our negotiations with Cuba, hopefully to manage to finalize the framework of our ongoing dialogue." Around the world many good people such as Federica Mogherini have, from time-to-time in the past five decades, done their best to bring a degree of sanity and decency to U.S.-Cuban relations. Unfortuantely, those efforts have failed. So will Federica Mogherini's. 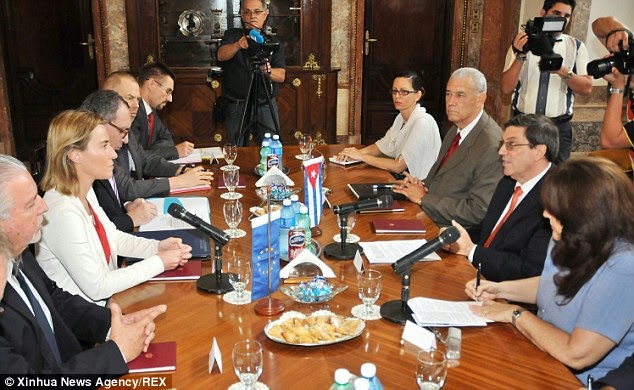 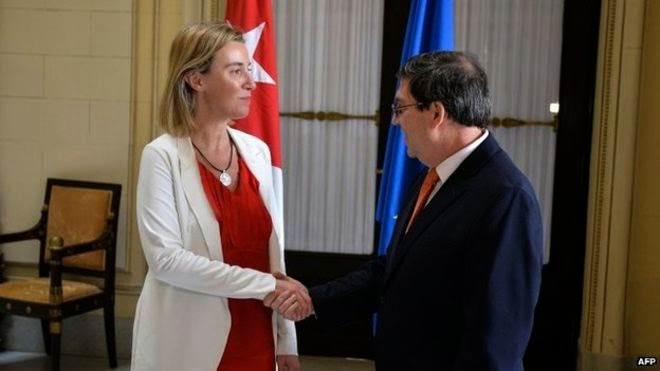 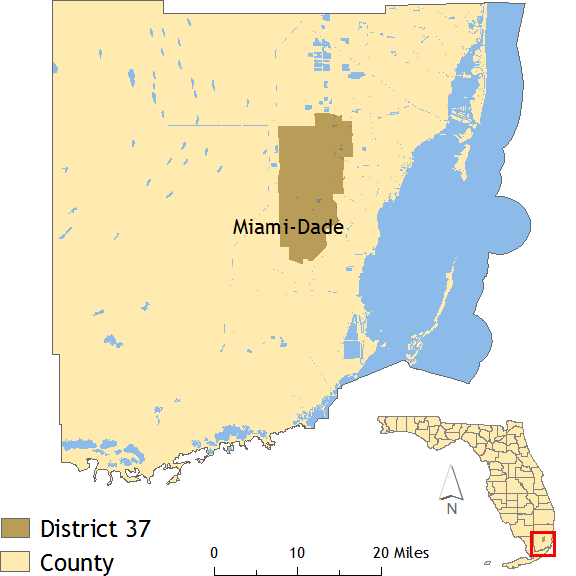 For two generations, Cubans and Cuban-Americans in just one small area of the United States -- Miami-Dade -- have dictated America's Cuban policy. Recent polls agree that the majority of Cuban-Americans in Miami-Dade, along with the rest of the world, want that to change, starting with the end of the cruel U. S. embargo against Cuba that has existed since 1962. But since the 1950s America's Cuban policy has been in the hands of a self-serving few, leaving majority opinions out in the cold. That won't change. 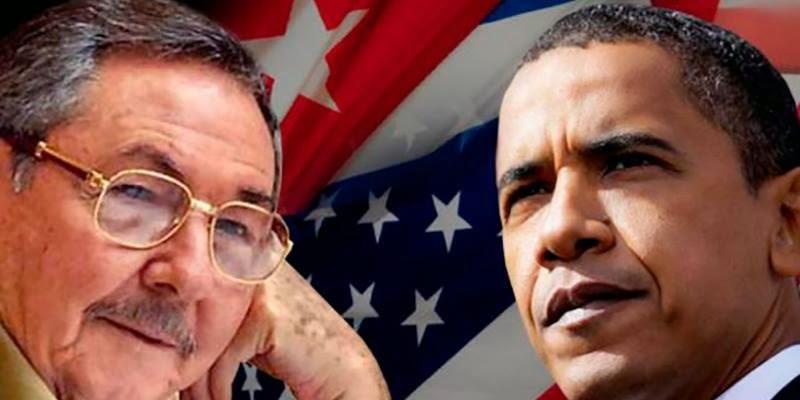 Cuba's President Raul Castro and America's President Barack Obama will both attend the Summit of the Americas that begins on April 10th in Panama. President Obama is tired of being embarrassed at international gatherings because of the universal disapproval of America's Cuban policy. Therefore, Mr. Obama hopes his plans to normalize relations with Cuba will have progressed enough by then to impress the other 33 nations in the Americas, at least enough to spare him from the usual embarrassments. Yet, by April 10th of 2015 -- and far beyond that -- America's Cuban policy will, for the most part, remain firmly in the hands of a self-serving few. The Summit of the Americas next month will be a reminder yet again that the U. S. democracy, even bolstered by the 28 EU democracies, cannot wiggle free of Miami-Dade's grip on America's Cuban policy. Understanding such undemocratic facts of life will help you understand those competing simultaneous news conferences this week -- the one featuring Anitere Flores in Florida and the one held by Federico Mogherini in Cuba. Both were...rather insightful.
******************************
- March 26, 2015