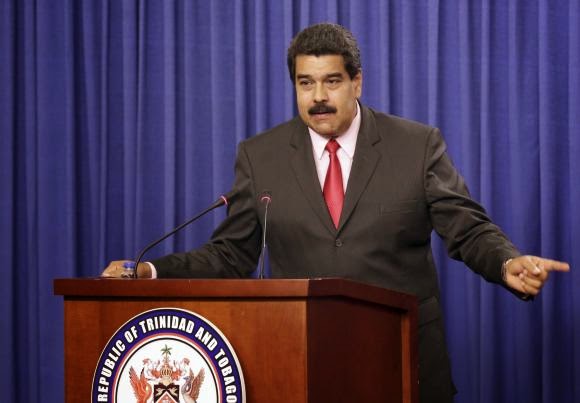 This Reuters photo shows Venezuela's harassed President Nicolas Maduro ratcheting up his viral anti-Americanism. Oil-rich Venezuela -- long an oil exporter to the U. S. -- is suffering. It has extremely high inflation and crime while struggling with basic shortages from household supplies to food. That tsunami of problems was exacerbated by the recent decline in oil revenue. Like his democratically elected predecessor Hugo Chavez, Maduro is a major supporter of Cuba, including a mutually beneficial oil-for-services trade arrangement. And like Chavez, Maduro firmly believes the prime anti-Cuban elements in the U. S. -- namely, the Bush dynasty and Cuban-Americans in the U. S. Congress -- are trying to overthrow his government. In fact, in 2002 the George W. Bush administration alarmed Venezuela and Latin American when it put anti-Castro zealots Otto Reich and Roger Noriega in charge of its Latin American affairs. The alarm came to fruition when a U.S.-involved coup briefly overthrew Chavez and the U. S. State Department quickly recognized the new government as legitimate...till riots in the streets of Caracas reversed it. When the last Bush administration ended, both Reich and Noriega reverted to their lucrative lobbying/consultancy businesses. But President Maduro is still paranoid about elements of the Bush presidencies and Cuban-Americans in Congress supporting a coup against him. Thus in the past week Maduro made headlines by banning former President George W. Bush and his Vice President Dick Chaney from visiting Venezuela. Additionally, Maduro barred the two most virulent anti-Cuban/Cuban-American Senators -- Robert Menendez from Union City and Marco Rubio from Miami -- from visiting Venezuela. 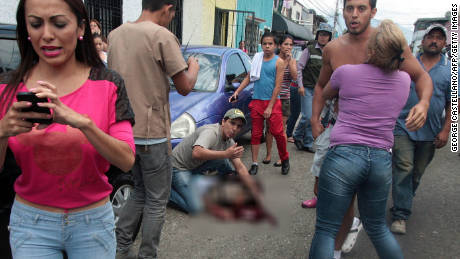 This traumatic street scene in which a teenager was killed was used by CNN to illustrate the increasingly more dangerous turmoil engulfing Venezuela. Streets demonstrations are now commonplace. 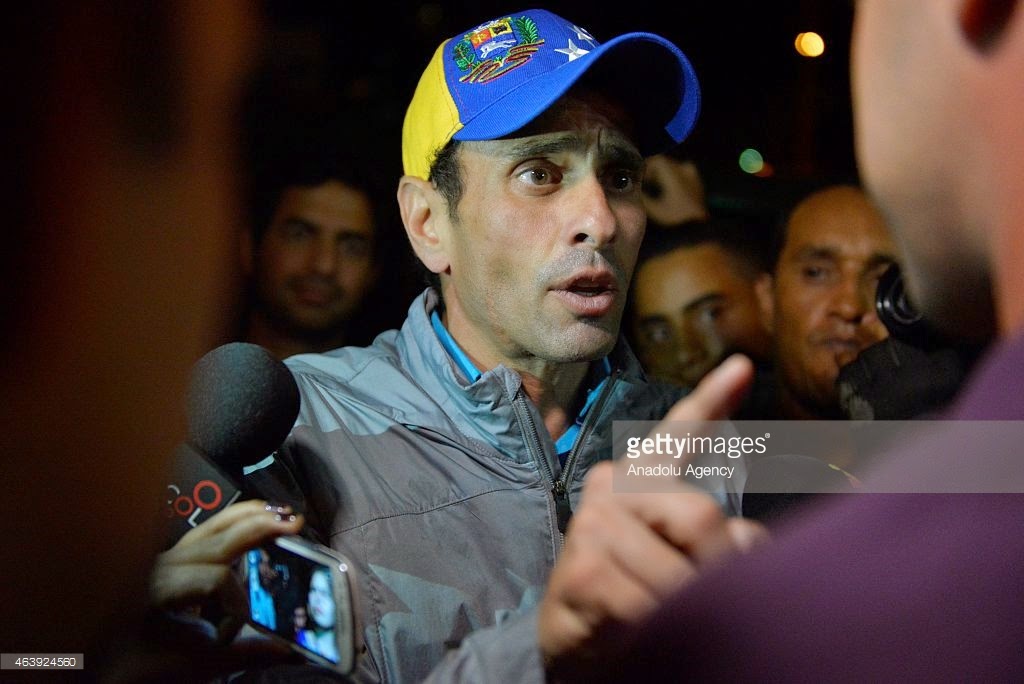 In the past year President Nicolas Maduro has jailed the primary opposition leaders, including Henrique Capriles, shown here, and Antonio Ledezma. Capriles was the governor of the state of Miranda while Ledezma was the Mayor of Caracas. Maduro believes both Capriles and Ledezma are strongly supported by anti-Cuban elements in Miami, Union City, and Washington. Amidst all the turmoil, Maduro's approval ratings have dipped into the 20-percentile region. But he still has the support of the poorest Venezuelans and the military leaders, and he still has resonance whenever he can attach any interference from the U. S. to his mounting problems, which indeed could unleash a very violent, bloody Latin American firestorm. 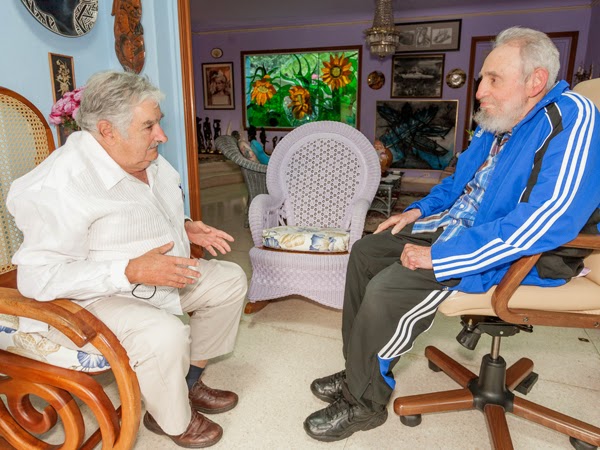 This photo is extremely relevant to both the recent history and the current events now unfolding in Latin America. That's the 79-year-old Jose Mujica being hosted by the 88-year-old Fidel Castro in Castro's Havana home. Last week Mujica finished up his successful 5-year run as the democratically elected President of Uruguay, and Sunday he turned the job over to another left-wing, peasant-loving President, his friend Tabare Vazguez. Like President Daniel Ortega of Nicaragua, President Dilma Rousseff of Brazil, etc., Mujica tried to replicate Castro by becoming a guerrilla fighter against a foreign-backed dictatorship. None replicated Castro's success but their efforts later led to many of them being democratically elected Presidents of their nations. Castro spent almost two years in prison, Rousseff spent almost three years in prison, and Mujica spent 13 years in prison! Twice he broke out of prison, once by tunneling underground into a private home. During his just-ended five years as President of Uruguay, Mujica lived outside the capital city of Montevideo in a very modest farmhouse and drove a 1987 Volkswagen. During the above conversation he said, "Living out your life modestly, Fidel, will add to the considerable legacy you will leave." This week on his last official day in office Jose Mujica made headlines by warning that the Venezuelan diaspora could implode into a bloody, long-term quagmire that "Latin America does not need considering the blood of children being shed elsewhere in wars." Jose Mujica's warning should be heeded. 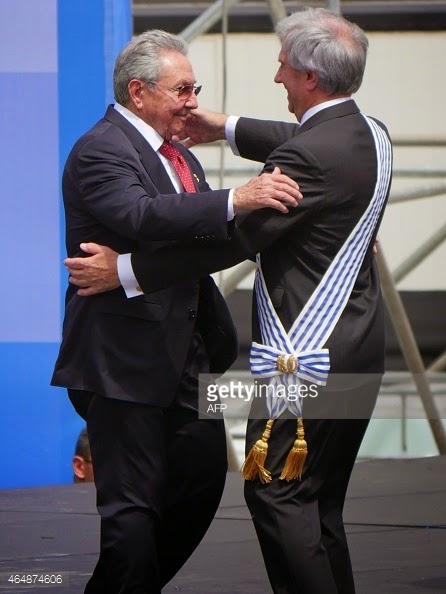 This Getty Images/AFP photo shows Uruguay's new President Tabare Vazguez eagerly embracing Cuban President Raul Castro at Vazguez's inaugural ceremony Sunday {March 1, 2015} in the Uruguayan capital of Montevideo. The 75-year-old Vazguez was Uruguay's President before and left office in 2010 with an approval rating of 80%. He replaces his friend, the 79-year-old and also wildly popular Jose Mujica. Uruguay is a very poor country with a population of only 3.5 million. But it's last two Presidents -- Vazguez-Mujica-and-Vazguez again -- are perceived as being staunch supporters of the majority poor. That's why Vazguez so eagerly embraced Raul Castro Sunday. Hundreds of Uruguayan medical students are receiving totally free educations at Cuba's famed Latin American School of Medicine in Havana. Also, Cuba maintains a skilled staff of 30 Operation Miracle eye doctors in Uruguay and both Mujica and Vazguez credit Operation Miracle with improving or restoring eyesight for thousands of Uruguayans who otherwise would never have had such medical care. In Montevideo Sunday Raul Castro met other Latin American Presidents -- including Dilma Rousseff of Brazil and Michelle Bachelet of Chile -- who are strong supporters of Cuba. Such sessions point out that Cuba has strong support throughout Latin America and just one enemy, the U. S., in North America. Yet, Americans are not supposed to comprehend the significance of this photo. 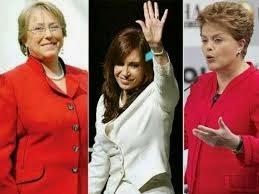 Three of Latin America's most important nations have female Presidents. They are, left to right, Michelle Bachelet of Chile, Cristina Fernandez of Argentina, and Dilma Rousseff of Brazil. Each of these three women has been democratically elected to first terms and then democratically re-elected to their present second terms. However, in 2015 all three are now facing massive internal and external problems that have seen their popular support dwindle. All three of these Presidents are great admirers of Fidel Castro and all three have visited his home in Havana multiple times. And all three, in varying degrees, blame anti-Cuban elements in the United States for some or most of their political problems. President Fernandez in Argentina is the most out-spoken and the most troubled. "Miami," she said, "seems intent on taking down Venezuela, Argentina, Chile, Brazil, Bolivia, Peru, and Nicaragua before that retake Cuba. I wonder if the world is watching this happen. Being blind to such things can destroy Latin American democracy." 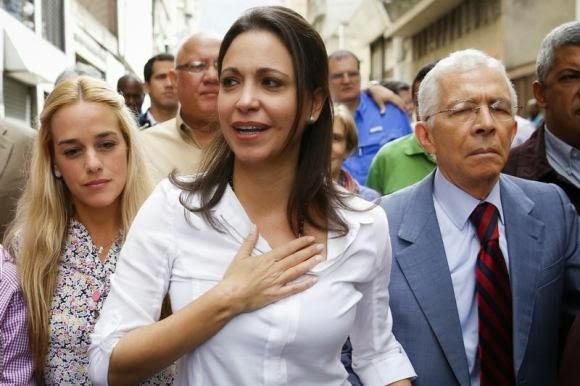 Venezuelan President Nicolas Maduro uses this photograph and other data to tie Maria Corina Machado to the George W. Bush administration and the Bush dynasty. Maduro backers have accused both her and President Bush of strongly supporting the 2002 coup that briefly overthrew democratically elected President Hugo Chavez to install a "U.S.-friendly" dictator, Pedro Carmona. In fact, to this day democratically elected Presidents across Latin America agree with Maduro on that point and, obviously, it makes them cringe. It also accounts for much of America's lack of influence today throughout the region.

The above document reportedly shows the signatures of major backers of the would-be dictator Pedro Carmona. Notice the signature of Maria Corina Machado in the lower left. Indeed, Maria Corina Machado attended dictator Pedro Carmona's official swearing in ceremony as Bush's Latin American experts Otto Reich and Roger Noriega, both notable anti-Castro zealots, in Washington signaled the U. S. recognition of the "new government." Hours later millions of Venezuelans took to the streets, forcing the coup-leaders to return Hugo Chavez to the Presidency. From that day in 2002 till he died in office of cancer in 2013, Chavez was America's biggest Latin American opponent. The Bush, Corina, etc., involvement in the coup never resonated in the U. S. and today Chavez's democratically elected successor, President Maduro, also encounters a total lack of understanding in the U. S. where Maduro, like Chavez, is vilified. Neither the U. S. media nor the U. S. Congress will ever come clean about bloody coups in Latin America -- such as in Venezuela in 2002, in Chile in 1973, etc., that were clearly designed to put U.S.-friendly dictators in power -- such as Carmona in Venezuela for a few hours and Pinochet in Chile for 17 years -- as opposed to democratically elected Presidents -- especially Castro idolaters such as Chavez and Maduro in Venezuela or Salvador Allende, who was killed in the coup that installed the blood-thirsty but U.S.-friendly Pinochet as Chile's dictator for 17 very, very bloody years. {Chile's President Bachelet's father was a Pinochet victim}. Within the last week, President Maduro in Venezuela has directly accused Maria Corina Machado of participating in "a conspiracy to kill me." Regardless of what transpires, as the outgoing and very knowledgeable Uruguayan President Jose Mujica warns, Latin America is now a tinderbox ready to explode. If it happens, Miami Cubans and the Bush dynasty, and thus the United States of America, would be blamed by many, if not most, of today's democratically elected Presidents in Latin America. Americans are not supposed to understand that and if they do they are not supposed to react to it. However, there is one member of the U. S. Congress who not only understands it but also has the guts to react to it. Jose Serrano was born in the U. S. territory of Puerto Rico 71 years ago. Since 1990 he has represented New York in the U. S. Congress. In 2002 as the coup unfolded against Hugo Chavez in Venezuela, Mr. Serrano was the only American politician to excoriate the George W. Bush presidency for shaming the American democracy by participating in such a coup. He famously and bravely said: "We participated why? Because Hugo Chavez is a friend of Fidel Castro." Congressman Serrano also assailed President George W. Bush for openly engaging well-known "Castro enemies" in countries that "should be allowed to elect and keep their own leaders." Regarding the 2002 Venezuelan coup that Mr. Serrano begged President Bush to avoid, the brave Congressman said, "Chavez has been democratically elected several times by the Venezuelan people. Who are we to keep eliminating popular leaders like Allende to install Pinochet in Chile or eliminate a Chavez to install our man Carmona in Venezuela?" Jose Serrano is not the best known Congressmen in America. That might be because he could be the best and the bravest person in the U. S. Congress. Congressman Jose Serrano is also a reminder that a rich and powerful political dynasty should be held accountable for self-serving anti-democratic actions. 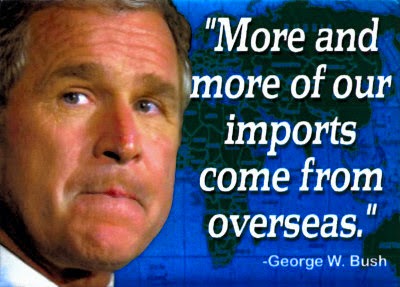 During which of his 8 presidential years did he finally figure that out? 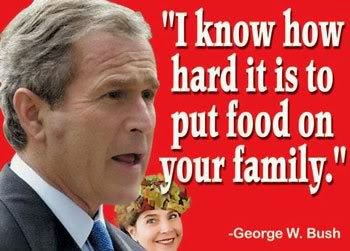 Is that because he had hunger problems growing up in mansions without food? 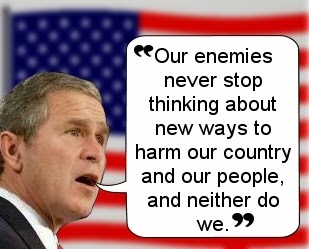 That confession was 8 years too late. 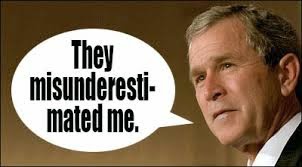 Yes, we sure did. 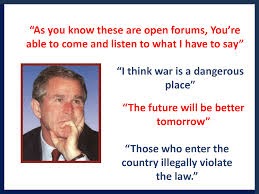 If his last name was Smith, would he have made it to Yale and to the White House? 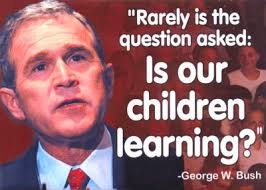 I believe, sir, you are the only one who has asked that. 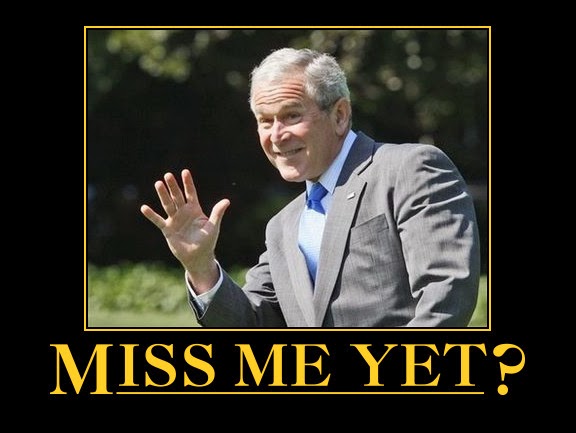