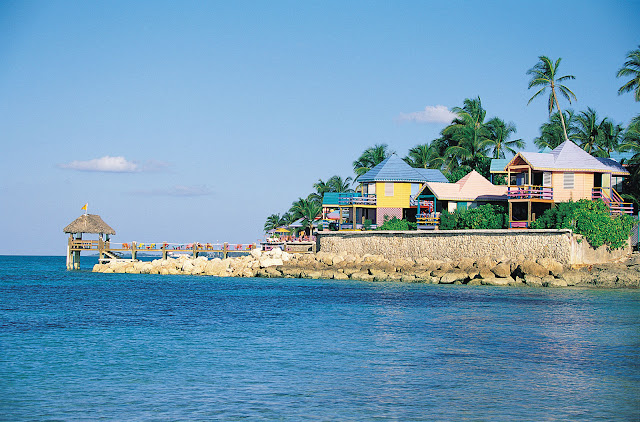 How would you like to own the oceanfront home depicted above. As a primary home, business, or vacation getaway castle it might be just what well-to-do families are looking for. A new oceanfront 18-hole golf course is within easy walking distance. The fishing or sunbathing from the pier is fantastic. The price for either purchasing it or leasing it for 50 to 99 years is quite reasonable. Uh, did I mention it's in Cuba? Sorry, I should have revealed that upfront. But now that it's out in the open, permit me to add that such oceanfront jewels can now be purchased by non-Cubans {otherwise known as foreigners} or they can sign 50 to 99-year leases if that is preferable. 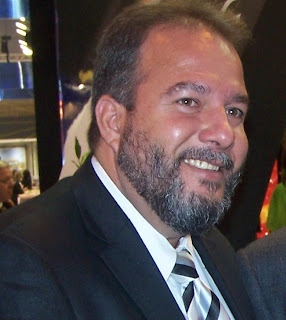 Manuel Marrero {above} is a very affable and decent fellow. He is also Cuba's Minister of Tourism. He says, as of 2011, only two golf courses existed in Cuba. Some well-heeled foreign investors convinced him they would help fund 16 more if Cuba would agree to allow foreigners to purchase or lease prime property. Marrero, in turn, convinced his governmental superiors to depart from the revolutionary past and open up the island's markets. So, initially, golf courses were designed for Holguin in the eastern part of the island, Pinar del Rio in the farthest western province, the main tourist mecca of Veradero, and the capital of Havana. Since then Cubans have been allowed to purchase or construct homes, restaurants, and other businesses with the government or foreign relatives providing loans. A, uh, market economy? "Sure!" Marrero says. "Call it what you want. Times change. We too can adjust to change. Are you...surprised?" 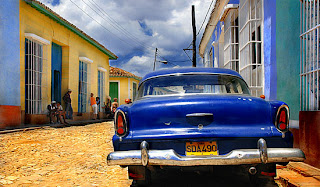 Since the Batista-Mafia era of the 1950s, Cubans have become legendary for their ingenuity in keeping antique cars in shiny, workable conditions even though they have had to improvise constant repairs. Now they can buy and sell cars and other possessions but the fresh bureaucracy is overwhelming at times.

Above is a green 1950 Chevrolet in excellent running condition passing by the luxury hotel at Cuba's plush Varadero Beach resort. The driver is both a skilled hotel worker and an expert auto mechanic. 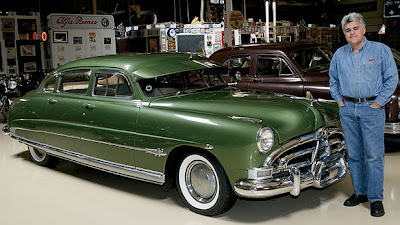 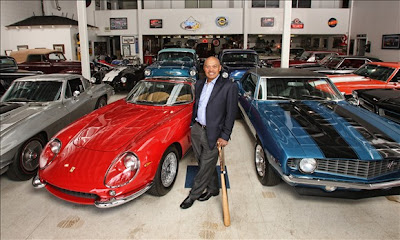 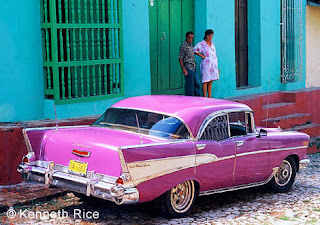 What would Jay Leno or Reggie Jackson pay for this pink and fine-tuned 1957 Chevy in Havana?
And is this "the bright pink Chevy that mobster Meyer Lansky famously drove around Havana?" 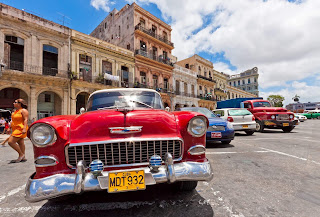 If Jay Leno and Reggie Jackson ever make it to Havana, it will resemble two rich Americans stepping into the world's biggest Candy Store and being greeted warmly by eager, friendly hosts!

Cubans are being given lush plots of land if they promise to grow vegetables and fruit. At great expense, the island currently imports 70% of its food. It's trying to correct that glaring revolutionary failure. 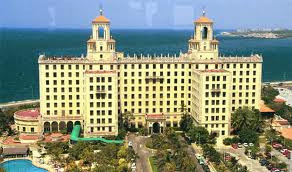 The iconic Hotel National de Cuba has been refurbished, including the room in which Frank Sinatra famously saw some ghosts. Cuba set a record for tourism in 2012 and the Economic Commission for Latin America (ECLAC) estimates an increase of 3.7 percent in gross domestic product (GNP) for Cuba in 2013. 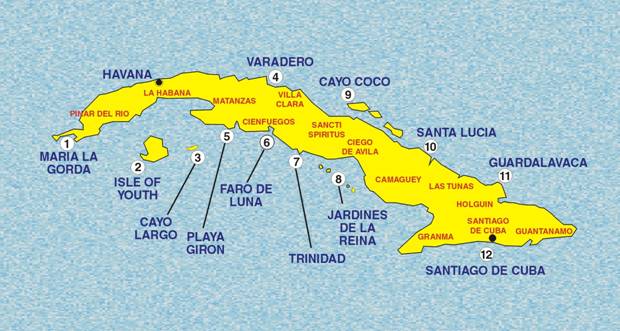 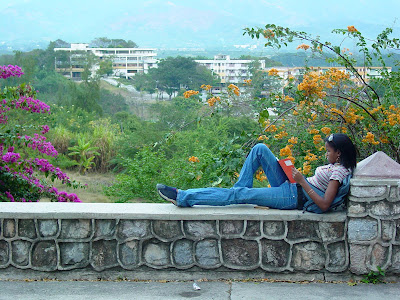 Cubans are among the healthiest, safest, and best educated people in the Americas. The casual young lady above is studying on the edge of Santiago de Cuba, the island's second largest city and former capital. 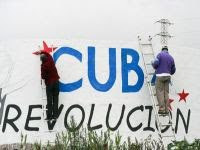 At midnight on January 1, 2013, workers unveiled the above billboard in Santiago de Cuba to mark the 54th year since the triumph of the remarkably mercurial Cuban Revolution over the Batista-Mafia dictatorship back in 1959. 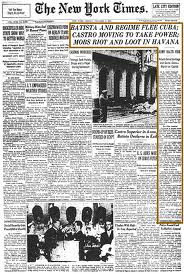 Above is the New York Times front-page that first told Americans about the triumph of the Cuban Revolution. If the NY Times were to update that page in January of 2013 -- 54 years later -- the headline and sub-headlines might read: "REMNANTS OF BATISTA REGIME STILL TRYING TO RECAPTURE CUBA; Efforts Still Backed by Superpower U.S.; Fox News Totally Distraught Over Cuba Still Being Sovereign Nation."

For sure, the eternally coveted and much-targeted island of Cuba still has its problems, such as the hateful 51-year-old U. S. embargo that many also consider a self-inflicted and festering American wound. 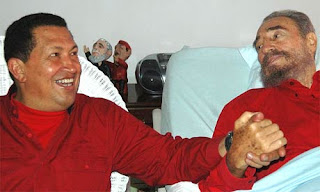 And two people vital to Cuba -- Hugo Chavez and Fidel Castro -- are both now mortally ill. 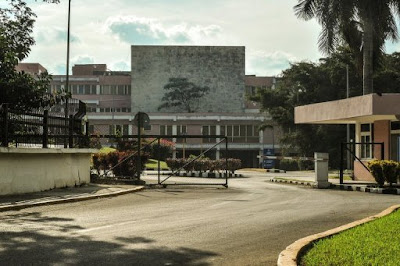 Above is the hospital in Cuba where Venezuelan President Hugo Chavez -- as of Jan. 5-2013 -- appears to be fighting a losing battle after his 4th major cancer operation. Chavez is Cuba's main ally and benefactor. Cuba in 2011 had $20 billion in foreign trade, $8.3 billion of it with Venezuela. Cuba gets two-thirds of its oil -- 115,000 barrels a day -- from Venezuela in exchange for Cuba having 44,000 medical and technical personnel in Venezuela. {The foregoing statistics are accurate and confirmed by both countries}

But Cuba is still there. And it will still be there as the Pearl of the Caribbean after the end of the U. S. embargo and the passing of both Fidel Castro and Hugo Chavez. It is, most of all, resilient and permanent. 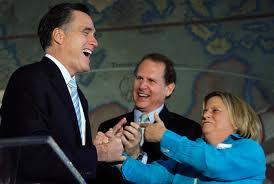 No longer {as above} can U. S. presidential candidates expect to capture Florida's crucial 29 electoral votes by flocking to Miami to promise the dominant anti-Castro Cuban-exile zealots they, when elected, "will be tougher than ever against Castro!" In the past 54 years, Havana has changed; so, too, has Miami.

Cuba, right next door to the U. S., dominates the Caribbean. The key to engaging Cuba is to not continually try to capture it. In 2013 Brazil, China, Russia, Vietnam, and Malaysia are among the important nations increasing their engagement with Cuba. None of those nations are trying to conquer the island. 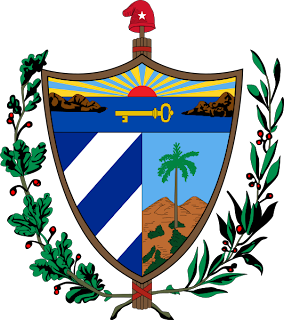 So the key for mutually positive engagement with Cuba is to simply convince the island that you are not trying to conquer it. The United States needs to locate that key and open the door to a changing Cuba. 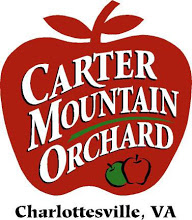 Carter Mountain Orchard has worked tirelessly to legally circumvent the self-deprecating, Cuban exile-inspired U. S. embargo against Cuba. Its Herculean, worthwhile goal is to sell apples to the island. The effort, as frustrating as it is, has mutually benefited Cuba's children,  the Carter Mountain Orchard, and Virginia's economy. The Washington Post article on Nov. 25-2012, written by Laura Vozzela, lauded 77-year-old Henry Chiles for his stellar efforts in managing to overcome obstacles and sell his apples to Cuba.

Mr. Chiles {above}, the patriarch of Carter Mountain Orchard, told Laura Vozzela that the U. S. embargo against Cuba presents "A lot of challenges, a lot of paperwork, holdups. It's difficult." But Mr. Chiles is a prime reason Cuba is "Virginia's seventh-largest export market, more than twice as large as 20th-ranked Britain." Mr. Chiles' two grand-fathers started shipping Virginia-grown Pippin apples overseas in wooden barrels 100 years ago and, Vozzela explains, Mr. Chiles was influenced by the recent economic downturn to fight the embargo so he could ship his apples to nearby Cuba. He fought, and won. Other states, as well as "20th-ranked Britain," need  energetic men like Mr. Chiles to fight back against life's inequities. 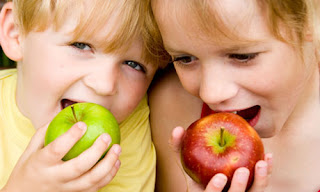 Because of Henry Chiles, Cuban children also get to eat delicious, healthy Virginia apples. And Virginia's economy benefits. So, what's so bad about that splendid double-barreled action? 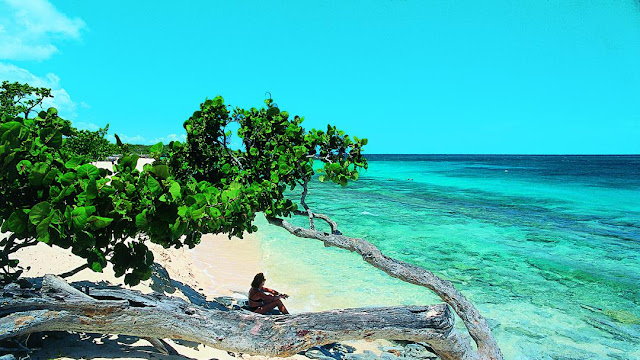 The moral of this story: A nice, lonely Cuban sits solemnly on the shoreline, staring across the Caribbean Sea in the direction of nearby Florida. Pensively and silently, she wonders philosophically to herself: "It's a new year, 2013. It's not 1959. I don't hate you. I never have. So, America, why do you hate me?"
***********