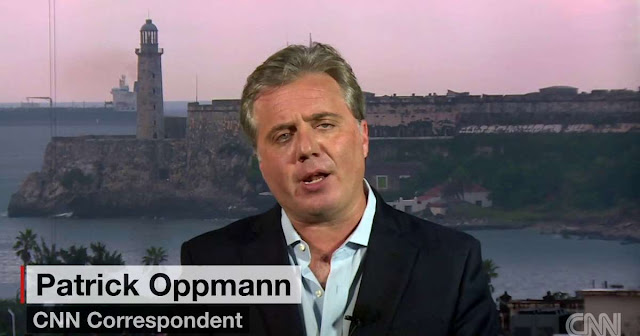 Even this week -- this second week of Feb.-2021 -- as CNN is obsessed with the 2nd Congressional Impeachment trial of former President Trump -- CNN has provided major airtime for its excellent correspondent based in Havana, Patrick Oppmann. 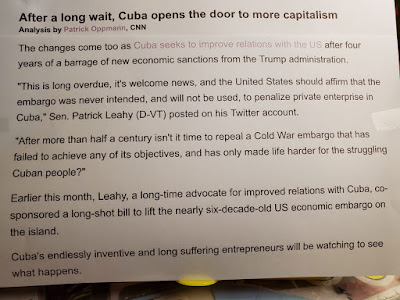 Patrick Oppmann opines, in the last sentence depicted above, that "Cuba's endlessly inventive and long suffering entrepreneurs will be watching to see what happens." Unfortunately, of course, so will some powerful people, even in President Biden's own Democratic Party, who profit from being {or answering to} Counter Cuban Revolutionary forces in the United States. 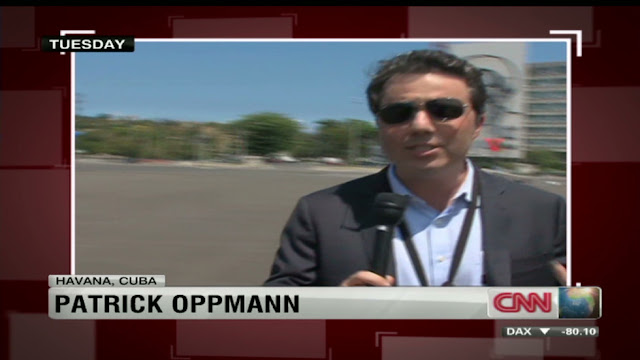 In his CNN report from Havana Patrick Oppmann mentioned that long-time {since 1975} Senator Patrick Leahy has co-sponsored yet another bill in the U. S. Senate designed to finally overthrow the U. S. Embargo/Blockade against Cuba. But, yet again, the cruelty and insanity of the Embargo/Blockade within the bowels of the U. S. democracy has for decades been fueled by the greed or revenge that a few powerful Cuban-Americans and their sycophants derive from maintaining it. 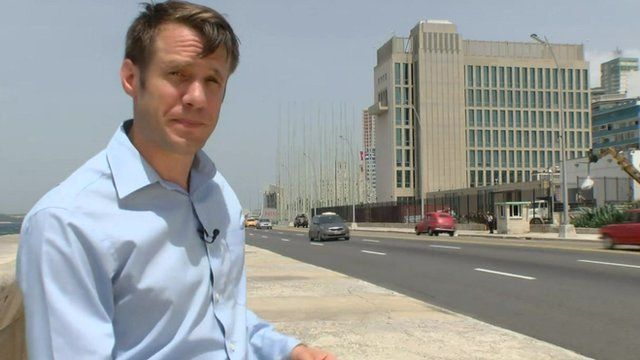 While CNN's Havana-based journalist Patrick Oppmann provides fair reports from Cuba on U.S.-Cuban affairs, so does the BBC's excellent journalist Will Grant. Below the gist of Will Grant's article this week is all about Cuba's effort to energize its economy during the Age of COVID-19 that has been coupled with the Trump administration's dire efforts in the past four years to totally wipe it out. Those twin perils in the past year have reduced the overall Cuban economy by another 11%. Below read what the BBC's Will Grant says the island is trying to do about it. 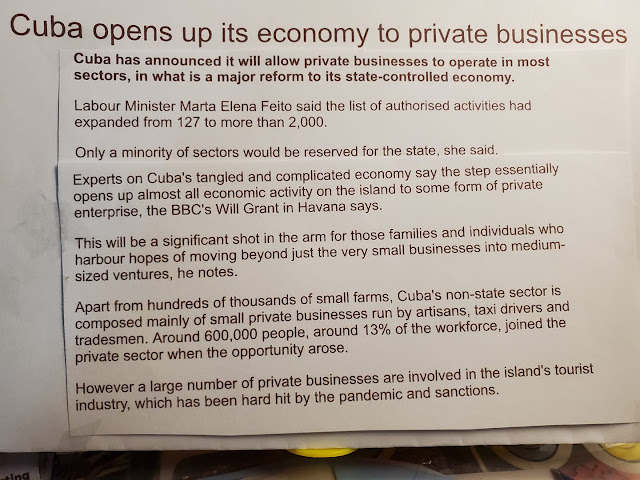 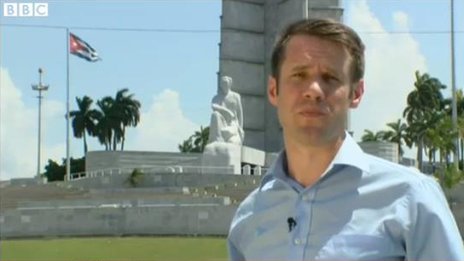 The BBC's Will Grant, as well as Patrick Oppmann of CNN, this week reported fairly on what the Cuban government is implementing to help entrepreneurs revive the economy, and as well as reporting on how the Cuban people are reacting to the changes. 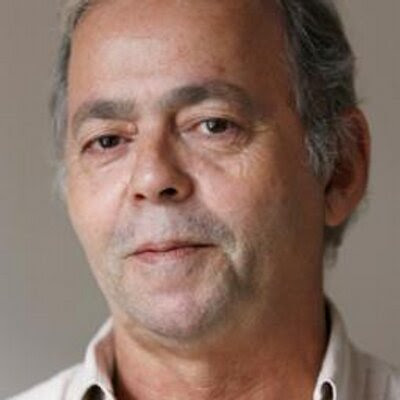 Another good source for fair journalism regarding US-Cuban relations is Reuters's Marc Frank, a great journalist who has been based in Cuba for decades. This week his latest article reported on significant efforts by the Cuban government to help small business entrepreneurs. 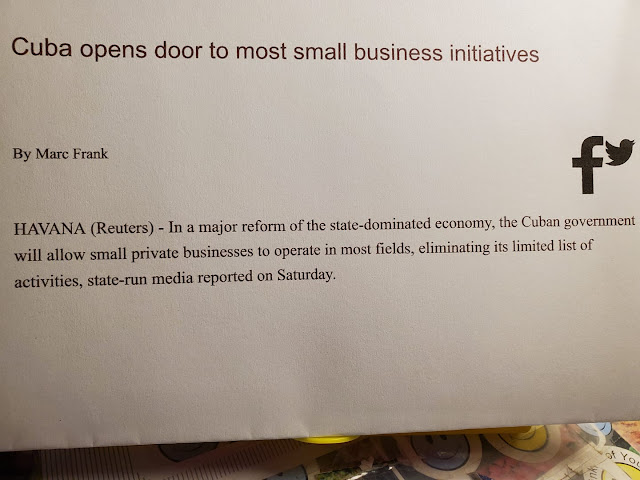 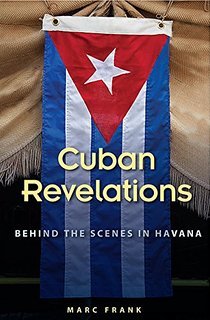 In his great book CUBAN REVELATIONS, Marc Frank discussed many of the revelations he gained from actually living for many years among the Cuban people on the island, such as these succinct words: 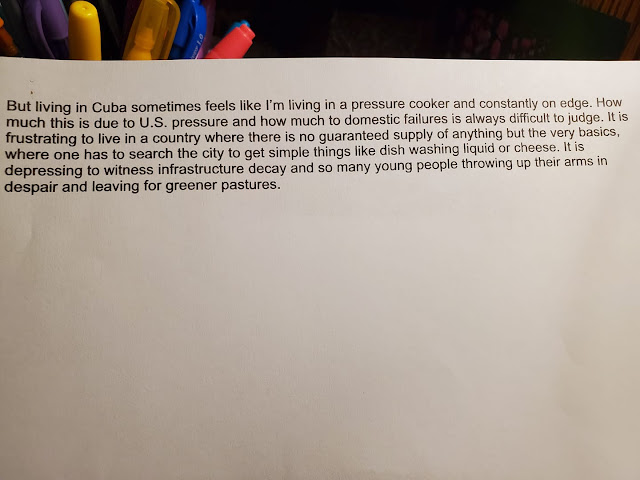 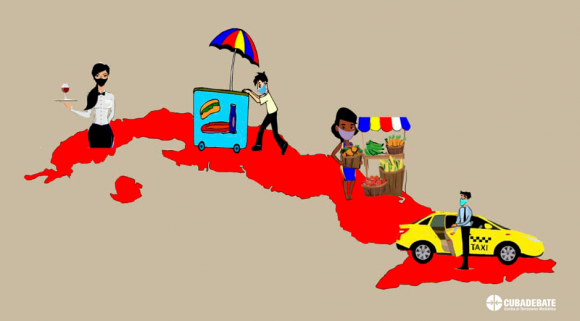 Patrick Oppmann, Will Grant, and Marc Frank are...for sure...three fair-minded journalists who report real news from Cuba. Of course, most U. S. sources...such as The Miami Herald, Miami's Radio-TV Marti, The Washington Post, etc., are dispensers of only anti-Cuban propaganda...which makes real journalists such as Oppmann, Grant, and Frank all that much more important for finding the truth about U.S.-Cuban relations. 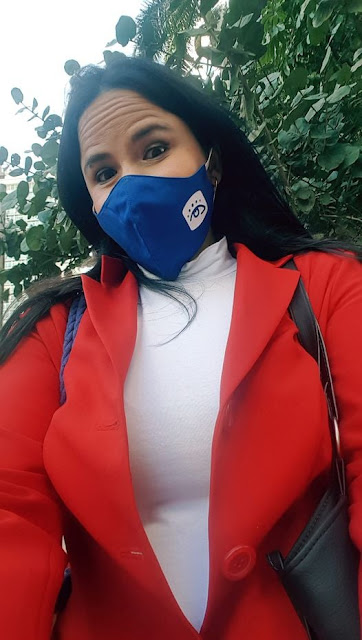 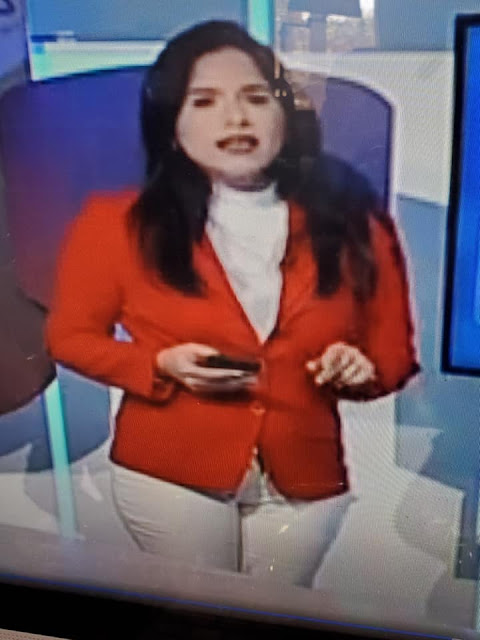 Actually, most of the 11.2 million Cubans on the island are now geared to ubiquitous Internet social media platforms to discuss their lives and opinions, including complaints about the government if they feel like it. And most of the 11.2 million Cubans depend on and have learned to accept as true and viable the news and its efficacy that they get from state radio, television, and newspaper sources. TV anchors such as Rosy Amaro shown above are well educated and talented journalists who live with the people and understand that if their newscasts and reporters are not honest with the people that their listeners, viewers, and readers will know...and let them know about it. Rosy Amaro, for example, is a star on Cubavision International News but on both social media and on the airways she has criticized the government when she feels everyday Cubans are treated unfairly. 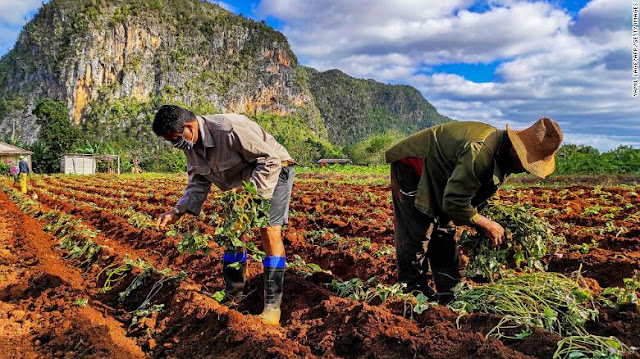 Now entrepreneurs in Cuba, such as these farmers in Vinales Valley, are getting more support from the government to expand their businesses and profit more from their efforts. 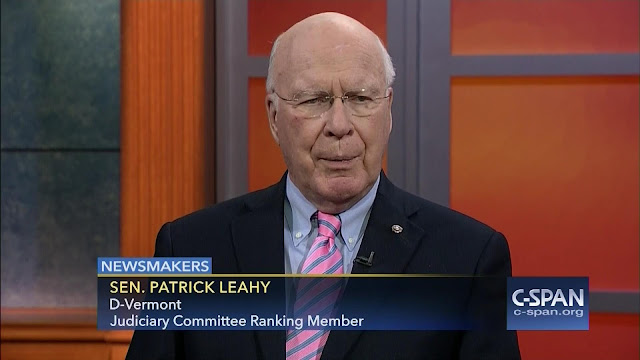 In the United States no one has worked more tirelessly than powerful Democratic Senator Patrick Leahy from Vermont to bring sanity to the insane and self-serving U. S. policies regarding Cuba that, for all these decades, have been crafted to enrich and empower a minority of rather unholy and greedy individuals. As noted by fair journalists, such as those mentioned above, Senator Leahy this week noted the entrepreneurial changes taking place in Cuba and said again: "This is long overdue and it's welcome news, and the United States should finally affirm that the Embargo, from 1962, was never intended to last forever and to forever penalize private families and private enterprise in Cuba. In this year of 2021 if we cannot fairly and honestly deal with that it says more about us than it says about Cuba. Or we, permit me to say, too mired in having created too many generations of people who have profited immensely from such insanity and cruelty." 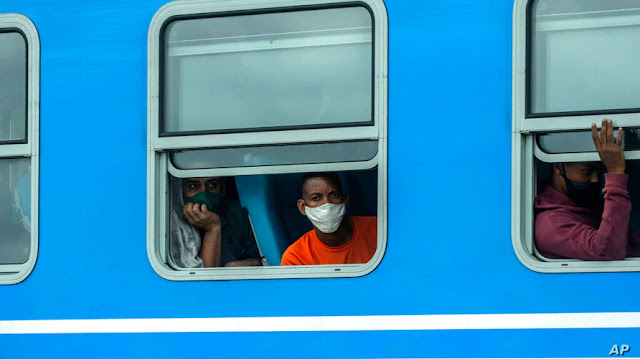 Cubans on the island, such as the ones shown above arriving in Havana on a train, have been pawns for centuries...for sure since the 1898 Spanish-American War that transferred dominance of the island from Spain to the United States from 1898 to 1959. In 1903 the U. S. exercised its prerogative and stole the plush Guantanamo Bay, where to this day the U. S. has an unwanted military base there along with an infamous prison. And in 1952 why and how did the U. S. democracy team with the highest echelon Mafia leaders to support the brutal Batista dictatorship. {And why hasn't the U. S. democracy never had to really explain such things??}. Of course, since 1959 Revolutionary Cuba has dominated the island but, for sure, almost seven decades of trying to recapture the island while destroying or  punishing the people who live on the island has created a vastly lucrative Cottage Industry in the United States even though somehow the pugnacious island has held off the world's Superpower FOR ALL THESE DECADES. Of course, in the U. S. only the few prime benefactors are generally allowed opinions about that dichotomous dilemma but, if truth be known, in the Internet Age we can now assume, for example, that the young man in the red shirt and wearing the COVID mask above has a Smart Phone and knows not only what his own government is doing to affect his life but also he knows what the U. S. government is doing to affect his life. The point I make is this: That young man shown above has opinions, and his opinions are IMPORTANT too. And, in fact, his parents and grandparents also have opinions that self-serving Americans don't think they should be allowed to have!!!