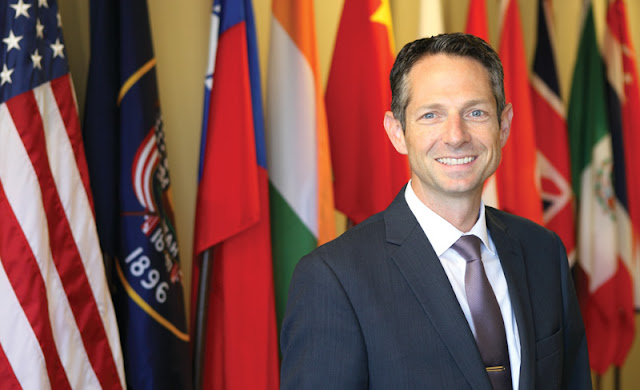 The President and CEO of World Trade Center Utah, Derek Miller, is the latest American to lead a large delegation of business executives to Cuba. He points out that Utah is now #6 and the fastest growing U. S. state in exports with $12.1 billion in goods and services exported in 2016. He told the Deseret News that, despite U. S. restrictions on dealing with Cuba, "The Cubans welcomed us warmly and said they wish they had better relations with neighbors across the way. They are still in a state of limbo in terms of a new U. S. administration coming in. Next year Cuba will have an election to choose its next leader, the first non-Castro since 1959, and who that next President is and what his or her policies will be will set the tone for the next several years if the U. S. loosens its grip." Among the Utah business executives in Cuba was Vance Checketts, the General Manager of Dell EMC, which employs 1,300 people in Utah. Mr. Miller said his organization is very anxious to "conduct normal or near normal legal trade with Cuba and it is apparent that thousands of other business interests in the U. S. want the same thing." 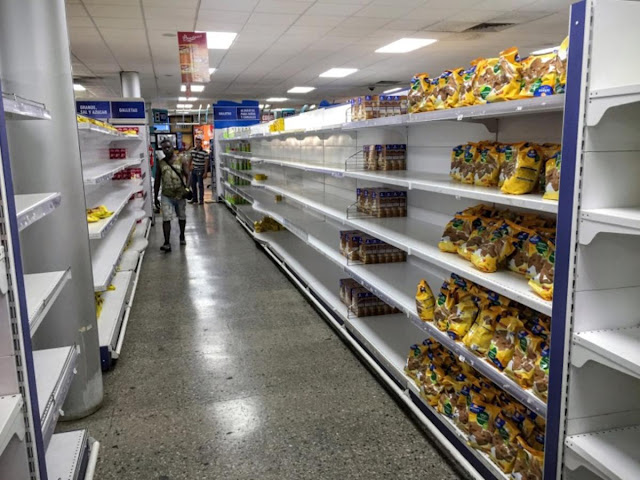 This photo was taken by Derek Miller to show empty shelves at a grocery story in Cuba. He used it back in Utah to point out that, except for the U. S. embargo of Cuba since 1963, normal trade relations between the U. S. and Cuba would "benefit both Cubans and Americans if friendship prevails." 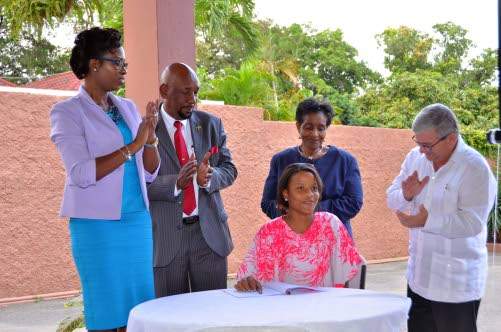 Also this week the Cuba-friendly Jamaica Observer used the above photo to make this point: Cuba's only "unfriendly" neighbor is the United States, a decision made indelible for over half-a-century by a few self-serving and revengeful Cuban-exiles and their sycophants in the U. S. Congress. This photo shows Taneisha Atkinson sitting at a table in Kingston during a ceremony in which the Cuban embassy awarded eight full and totally free medical scholarships to Jamaicans like her. It's a long-standing Cuban gesture. 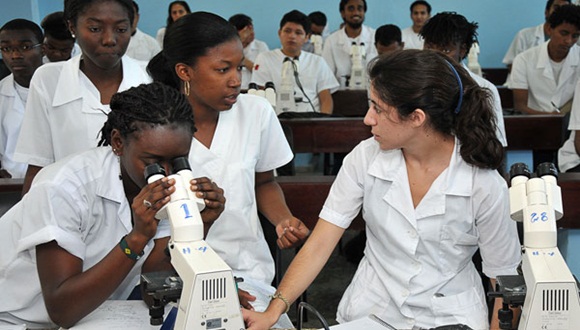 Except in the mainstream U. S. media, which basically is not allowed to mention anything positive related to Revolutionary Cuba, Cuba is renowned for having the largest medical school in the world. Moreover, Cuba has awarded totally free medical scholarships to thousands of eager foreign students from extremely poor regions, including from the United States of America, and Cuba only asks that, upon graduation, such students as Jamaica's Taneisha Atkinson return for at least five years to serve in the poor areas from whence they came. 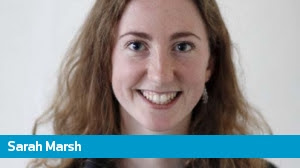 While the U. S. media is neither brave enough nor competent enough to fairly report on Cuban issues, the international media giants based in London -- the BBC and Reuters -- are brave enough and competent enough to fill the void. Sarah Marsh of Reuters is one such journalist who excellently covers Cuba from Cuba. In doing so she, of course, keeps a close eye on Miami and Washington. Thus, her article this weekend is again the best in preparing Americans and Cubans for this coming week's long-awaited decision by the Trump administration regarding whether to indecently assault Cuba or to sanely keep in place or even expand on former President Obama's positive overtures to the vastly important nearby island -- vastly important to America because no other topic sheds as much hubris or negativity on the U. S. as does its Cuban policy, which has been largely dictated since 1959 by only the most vociferous counter-revolutionaries in Miami and in Congress. Americans who disagree with that conclusion, of course, either ignore or pretend that there is no current vote in the United Nations with a 191-to-0 unanimity condemning America's Cuban policy. {Probably no other topic could possibly attain such glaring worldwide unanimity}.

That being said, if you are interested in whether President Trump this coming week will begin the process of finally destroying Revolutionary Cuba OR allowing it to exist as a pugnacious and sovereign little nation, start by ignoring anything you read or see in the mainstream U. S. media and depend on braver or more objective foreign media -- especially the BBC and Reuters in England, El Pais in Spain, etc. This weekend's Sarah Marsh-Reuters article -- "U. S. Lawmakers Reintroduce Bill to End Restrictions on Cuba Travel" -- is a place to start if you want a fair projection; of course, the mainstream U. S. media is always available if you just want anti-Cuban propaganda. So, let's stick with Sarah Marsh. After discussing the bill introduced last week by 55 U. S. Senators in the 100-member U. S. Senate, Ms. Marsh explained that, of course, was a bipartisan attempt by "the majority" of U. S. Senators to finally bring at least a degree of sanity and decency to America's Cuban policy. But then Ms. Marsh correctly explained that never...NOT ONCE...since 1959 has majority opinion been a factor in crafting America's Cuban policy that righteously and correctly currently gets that 191-to-0 condemnation in the United Nations. Ms Marsh astutely surmised that the Republican leaders in the Senate would not even allow "the measure to come up for a vote." 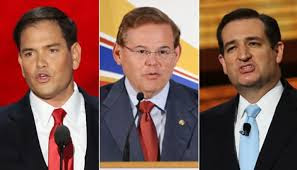 You see, in the 100-member U. S. Senate there are three visceral Cuban-American counter-revolutionaries -- Marco Rubio, Bob Menendez, and Ted Cruz. Although every poll shows that a strong majority of Cuban-Americans EVEN in Miami favor President Obama's sane and decent Cuban policies, there seems to be zero chance that such moderate or pro-Cuban Cuban-Americans could get elected to Congress. And further, whether in Miami or in Congress, only visceral Cuban-American counter-revolutionaries seem eligible to either voice or cast opinions in regard to Cuba. {Remember the car-bombing in Miami of moderate Cuban-American journalist Emilio Milian when he tried to voice his opinion? You probably don't because you are not supposed to either remember it or to Google it}. 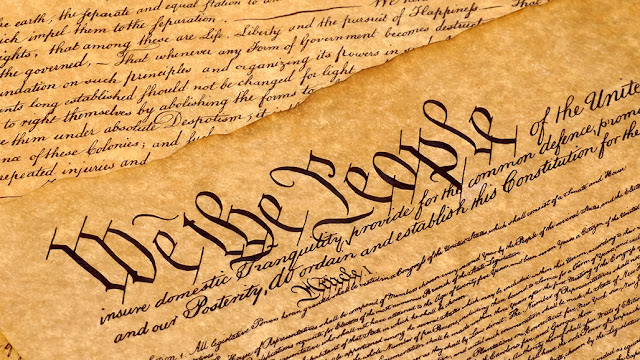 The U. S. democracy took a severe hit in 1952 when right-wingers in the Eisenhower White House teamed the United States with the Mafia to support the Batista dictatorship in Cuba. When the Cuban Revolution stunned the world by overthrowing that vile, thieving dictatorship in January of 1959, the leaders merely reconstituted themselves on United States soil, mostly in the Miami area. What evolved since then has been an even bigger and even more significant assault on both Cuba and the U. S. democracy. A vast multitude of documentations attest to that sheer fact, which was merely punctuated yet again this weekend when Sarah Marsh of Reuters pointed out that the bill in the U. S. Senate designed to bring some decency and sanity to America's Cuban policy...a bill supported by a strong bipartisan majority of Senators...would not even be allowed to "come up for a vote." That, folks, is Democracy-in-Action as it pertains to Cuba, an action that currently defames America and Democracy by a 191-to-0 UN margin.

So while propagandized Americans are not supposed to comprehend it, a visceral and extreme minority of counter-revolutionary Cuban-Americans will continue to dictate America's Cuban policy, the policy opposed in unanimity worldwide, and that includes all of America's very best international friends. 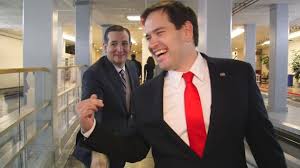 As a pusillanimity-plagued majority of Americans and Cuban-Americans sit back passively, Ted Cruz and Marco Rubio have laughed their way to the U. S. Senate and both presidential wannabees believe they can laugh their way to the White House. Odds are...that will eventually happen, and those who let it happen will deserve it. However, the United States democracy will not deserve it, nor will millions of innocent Cubans.