Yesterday -- August 24th, 2016 -- a major article in the Miami Herald blared this headline: "IRS Goes After Pastors for Peace for Sending Aid to Cuba." Americans are not supposed to realize it but the article is a reminder that the Batistianos & Mafiosi booted off the Island by the Cuban Revolution in 1959 were largely kicked only a short distance -- resulting in a quick but soft landing in Miami where recapturing Cuba is still a big dream.
The Miami Herald article pointed out that the founder of Pastors for Peace, Reverend Lucius Walker, has been "received like a hero" for helping everyday Cubans who have long suffered from such assaults as the U. S. embargo, which has been in effect since 1962 when it was imposed, according to declassified U. S. documents, for the purpose of starving and depriving Cubans to induce them to rise up and overthrow Fidel Castro...after U.S.-based assassination attempts, the 1961 Bay of Pigs attack, etc., had failed to accomplish the reinstatement of the Batistiano-Mafiosi rule in Cuba. The Miami Herald yesterday mentioned the aid Pastors for Peace has managed to get to needy Cubans and then reported: "But Pastors for Peace now faces punishment for its charitable acts from...the Internal Revenue Service. The organization was recently informed that it will lose its tax-exempt status for failing to disclose its shipments to Cuba." Yet, as indicated by the above photo, Pastors for Peace has long made no secret of its many shipments of aid to Cuba. 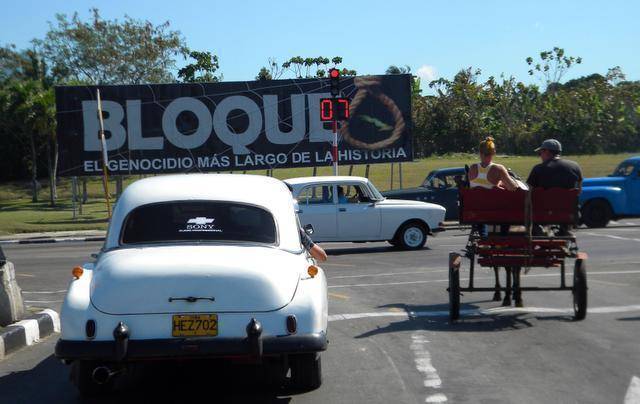 The U. S. embargo against Cuba...Cuba calls it a blockade...has since 1962 severely harmed millions of Cubans on the island while also severely harming the worldwide image of the United States and democracy. But that fact, of course, doesn't concern those who have insisted on maintaining it for the past half-century and plan to keep it in place for the next half-century, or at least until the Batistiano remnants and their easily-acquired congressional sycophants reclaim the plush island. 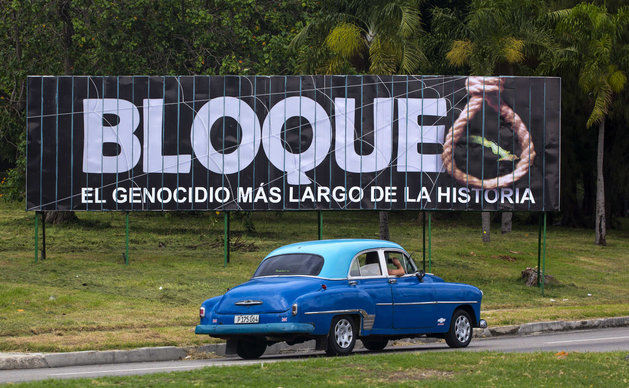 Despite the ongoing efforts of good people like President Obama, Senator Amy Klobuchar, Congresswoman Kathy Castor and Pastors for Peace, the longest and cruelest embargo/blockade ever imposed by a powerful nation against a weak nation remains very much in vogue to sate the revenge, political and economic appetites of a small but powerful minority very willing to mock the U. S. democracy as well as the 191-to-2 yearly vote in the United Nations that vehemently opposes them. 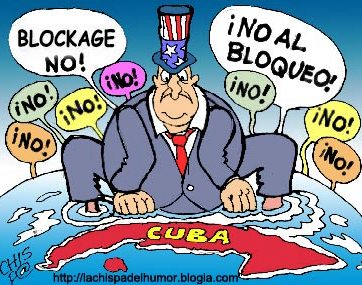 This image of America pleases a few but shames many. 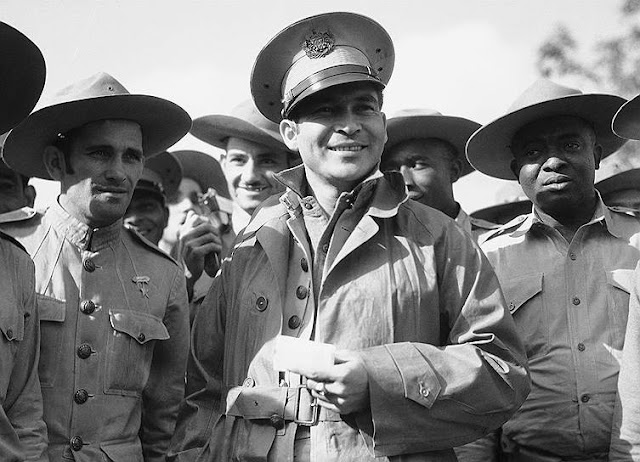 The two-bit army sergeant Fulgencio Batista had one lucrative stint as Cuba's ruler in the 1940s. But it's his second stint as Cuba's brutal, thieving dictator -- from 1952 till 1959 -- that shames America the most to this day. 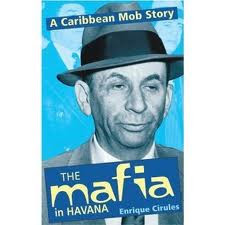 Meyer Lansky was the financial brains of the U. S. Mafia, second in power only behind his buddy Lucky Luciano. Both men had long craved Cuba, as had many politicians in Washington. It so happens that one day the semi-retired Lansky mentioned to his retired friend Batista, "I've always wanted the Mob to own its own country." That comment gave author Enrique Cirules the title and sub-title for his book: "A CARIBBEAN MOB STORY: The Mafia in Havana." Batista, following his rule of Cuba in the early 1940s, still had friends in Washington and Havana. So in 1952 Batista easily fulfilled Lansky's long-time dream. 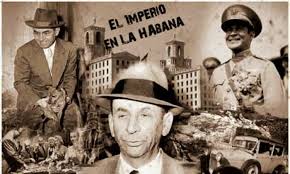 Beginning in 1952, the trio above -- Luciano, Lansky and Batista -- relished their brutal, thieving dictatorship in Cuba that was powerfully and shamefully supported by the world's most powerful and most famed democracy, America. It seems that key people in the Eisenhower administration...Nixon, the Dulles brothers, etc...in 1952 thought Lansky's dream about the Mob owning its own country, nearby Cuba, was a wonderful idea. 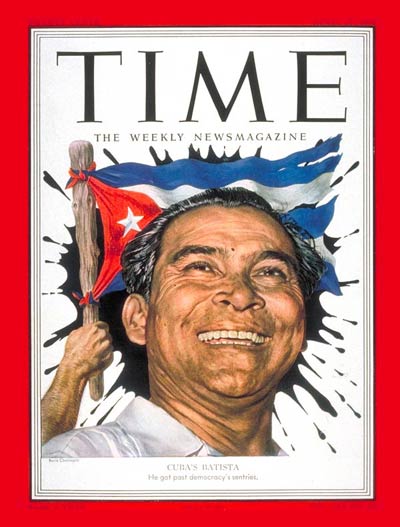 The April 21-1952 edition of Time featured Batista on its cover. 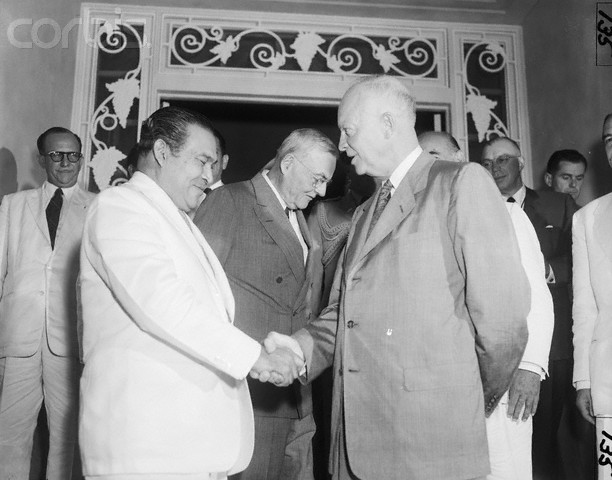 This photo shows U. S. President Dwight Eisenhower warmly shaking the hand of Cuban dictator Fulgencio Batista. In the center with his head bowed but softly grinning is Secretary of State John Foster Dulles whose brother Allen was CIA Director. Later...decades later...it would become known that the omnipotent Dulles brothers had strong connections to the United Fruit Company, the most infamous of the many American companies that benefited from U.S.-friendly dictators in the Caribbean and Latin America. 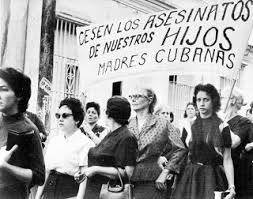 But robbing the island blind while starving the peasants was not the reason the world's most improbable revolution began a do-or-die rebellion against the Batista dictatorship that was considered unbeatable because it was backed by the U. S., the strongest nation in the world, and by the Mafia, the strongest criminal organization in the world. However, the biggest mistakes Batista and the Mafia {and thus Washington} made in Cuba were the routine murders of children designed to quell dissent. It had the opposite effect, spawning marches like the one depicted above in which very brave "madres Cubanas" -- Cuban mothers -- vividly and loudly protested the murders of their "hijos" -- children. Americans were aware of these marches because top New York Times reporter Herbert L. Mathews told them exactly what was happening in Cuba. The Americans didn't care. But a young Cuban lawyer...his name was Fidel Castro...took note of the marches. He then concluded that women brave enough and outraged enough to do that would join a revolution as guerrilla fighters. Many did -- Celia Sanchez, Haydee Santamaria, Vilma Espin, Tete Puebla, etc., etc. -- and Fidel Castro repeated as late as April of 2016 that "I believe my judgment about Cuban women was unique at the time and is the best one I've ever made." 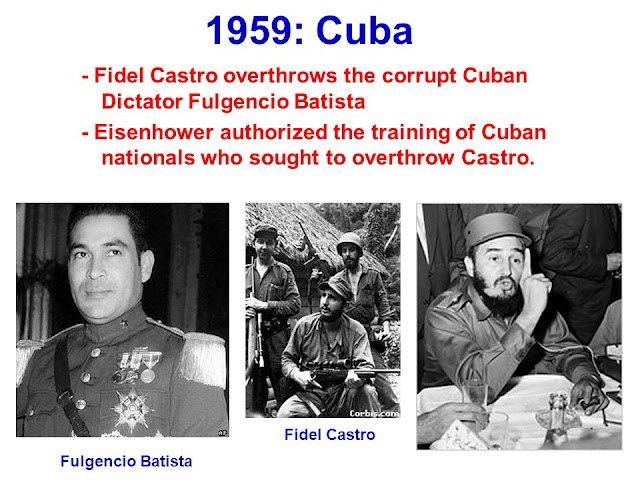 The U. S. trained the Batistianos at Fort Benning, Georgia;
Then in Nicaragua for the failed Bay of Pigs attack in 1961. 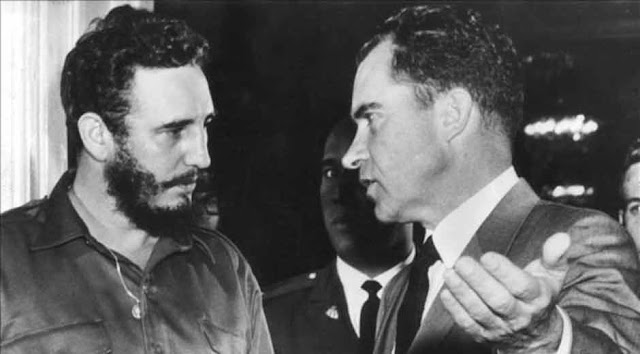 After overthrowing Batista, Fidel Castro in April of 1959 spent 12 days in the United States as a well-received U. S. hero. He believed the Eisenhower administration would permit Cuba and the U. S. to normalize relations. But this photo revealed that wasn't to be. Vice President Richard Nixon surprised and infuriated Castro by proclaiming that the U. S. and the Cuban exiles would quickly "regain control of Cuba." 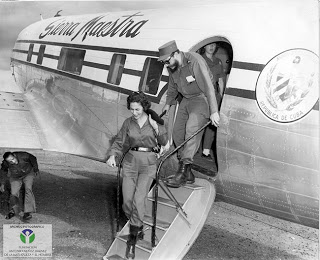 After those Nixon-marred 12 days in the U. S. in April of 1959, the two most important revolutionaries -- Celia Sanchez and Fidel Castro -- returned to the island determined that Nixon's bold prediction would never come true. By the time she was back on Cuba soil, Celia Sanchez...not Fidel Castro...was the one envisioning the Soviet Union, the world's other nuclear superpower, as the only counterbalance to the United States. It was Celia Sanchez who countered Nixon's proclamation with one of her own: "The Batistianos will never regain control of Cuba as long as I live or as long as Fidel lives." Celia died at age 59 of cancer in 1980 but the now 90-year-old Fidel is still alive. And thus, so is Celia's proclamation to this day. 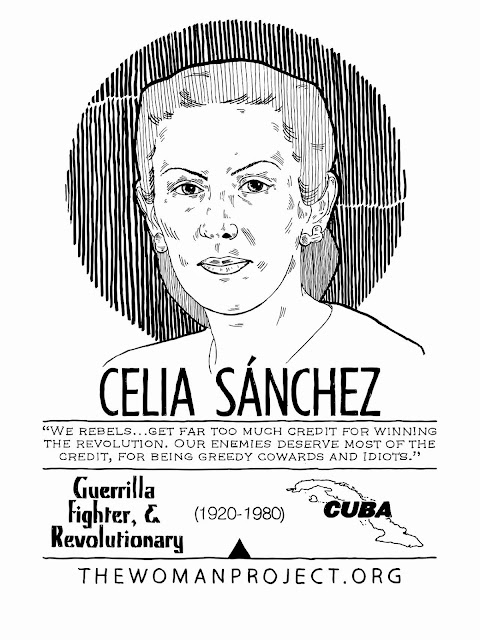 My favorite Celia quotation is her very prophetic rebuke of Nixon. But THE WOMAN PROJECT.ORG favors the one above: "We rebels...get far too much credit for winning the revolution. Our enemies deserve most of the credit, for being greedy cowards and idiots." I suppose, if she were alive today, Celia Sanchez would assign the same credit to the Batistianos and Mafiosi for the longevity of her Cuban Revolution. 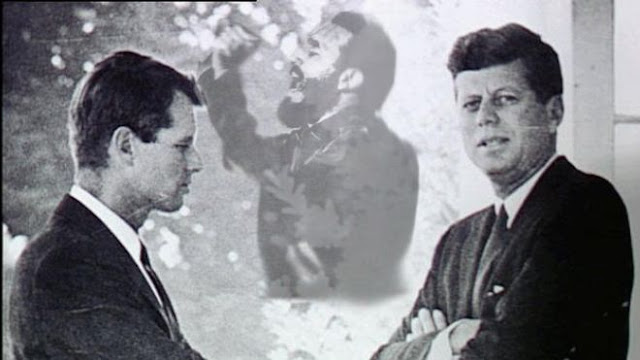 In 1960 the nascent Kennedy administration -- President John and Attorney General Robert -- inherited secretive Eisenhower administration plans to recapture Cuba. The Kennedy brothers dutifully carried through with multiple assassination attempts against Fidel in 1959, the Bay of Pigs attack in 1961 and the embargo/blockade in 1962. But by 1963 the Kennedy brothers both considered their Cuban actions their "biggest regret," as John told key aides such as Pierre Salinger and Robert told close associates including his wife Ethel. At one point, President Kennedy -- far angrier with the CIA than with Fidel Castro -- famously bellowed out loudly that he wished he could "blow the CIA to Smithereens!!" Indeed, in November of 1963 -- prior to his fateful trip to Dallas -- President Kennedy told his top aides that his top priority when he returned to Washington was to normalize relations with Cuba. If he had returned to Washington alive, the popular young President basking in Camelot glory probably would have accomplished that priority. 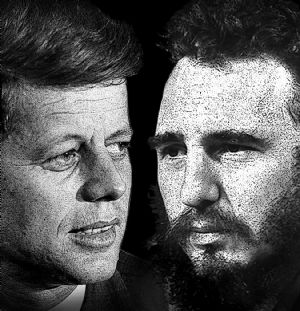 For a myriad of reasons, the 1000 days of the Kennedy presidency were deeply intertwined with Fidel Castro's Cuba because of what Kennedy had inherited from the Eisenhower-Nixon administration. 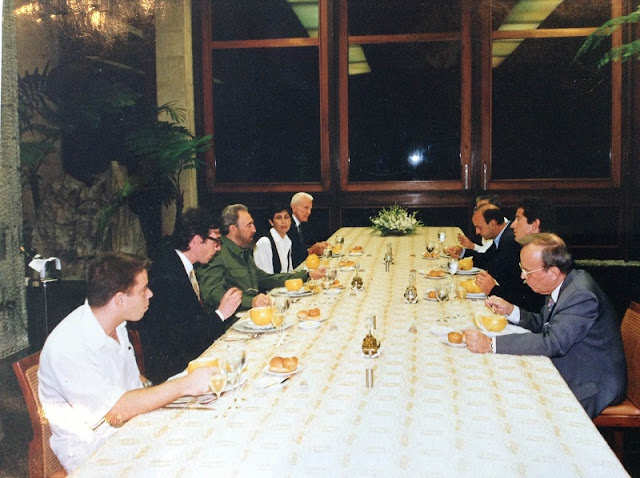 The strikingly handsome and awesomely popular John Kennedy Jr. went to Havana to personally show that he had no animosity towards Fidel Castro and "neither did my father." This photo shows John Jr. directly across the dinner table as he talked to Fidel. John Jr. tragically died in a plane crash in 1999. 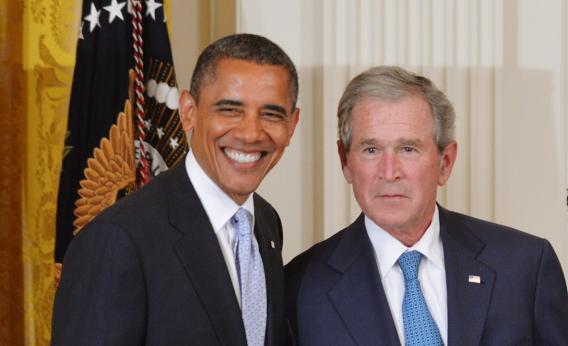 Just as Kennedy inherited the anti-Cuban vitriol from Eisenhower, President Obama has inherited massive anti-Cuban venom from the George W. Bush administration as well as from a Republican-dominated Congress. Yet, Obama has managed to apply more decency and sanity to U.S.-Cuban relations than all U. S. Presidents since 1952 combined. But still, remnants of the Batista dictatorship, ousted in 1959, still control most of the Cuban narrative and much of the Cuban policy in the United States. 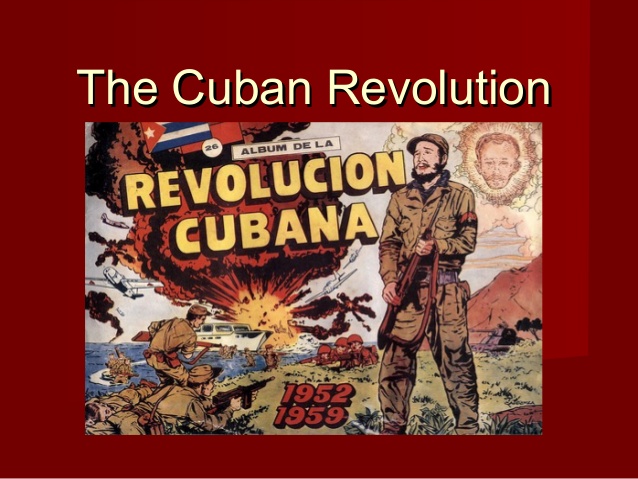 The revolution that ended the Batista-Mafia rule in Cuba. 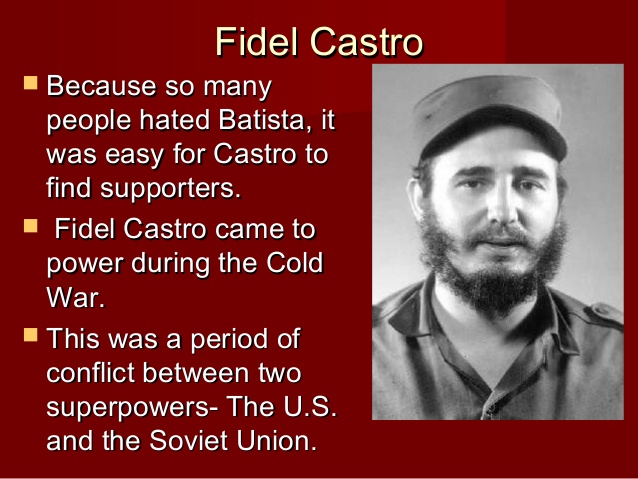 After overthrowing Batista, Castro spent those fruitless 12 days in the U. S. in April of 1959 hoping that the Eisenhower administration would allow Cuba to have somewhat normal relations with America. 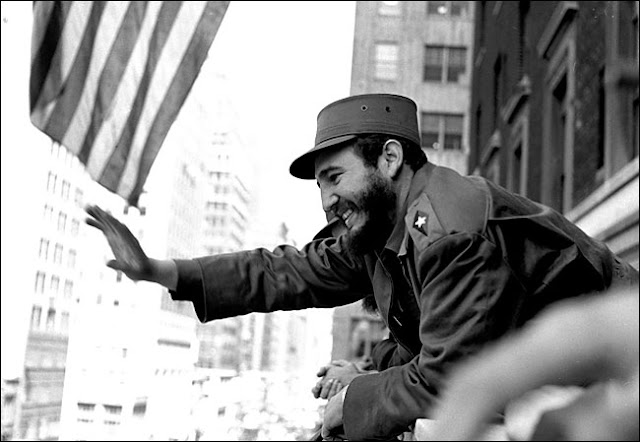 Roberto Salas took this photo of Fidel in New York in April, 1959.

Celia Sanchez in New York City in April of 1959. 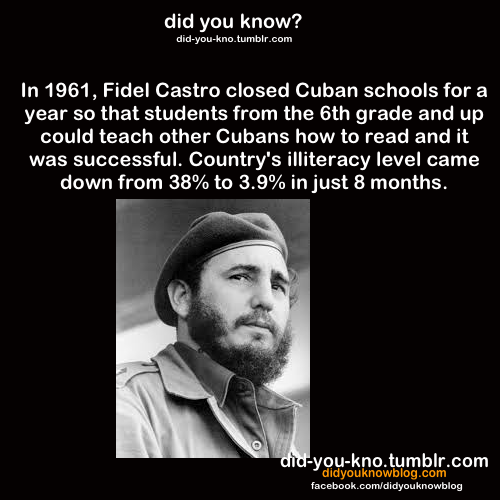 Free educations and free health care as well as free food and free shelter, if needed, have been some of the successes of the revolution, along with failures and setbacks. While the U. S. has helped many countries and people around the world, it has yet to help Cuba and its people, at least prior to Mr. Obama. 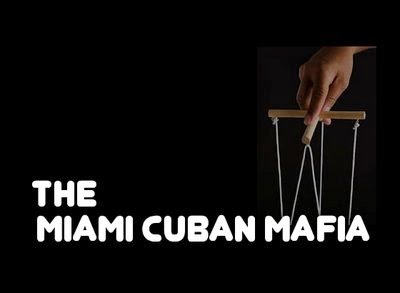 From 1959 till today -- Aug. 25-2016  -- the so-called Miami Cuban Mafia has been able to dictate, to an inordinate degree, America's Cuban policy. Yesterday's Miami Herald article about the U.S./IRS "punishing" Pastors for Peace for shipping some aid to needy Cubans is a case in point that shames America. 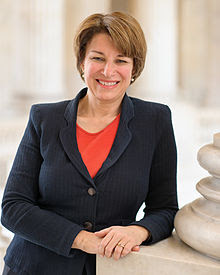 Senator Amy Klobuchar of Minnesota is co-sponsoring a bill that would help President Obama end the embargo and normalize relations with Cuba. But it seems the unpopular 535-member U. S. Congress simply does not have enough people with her combination of courage, astuteness, decency and patriotism. 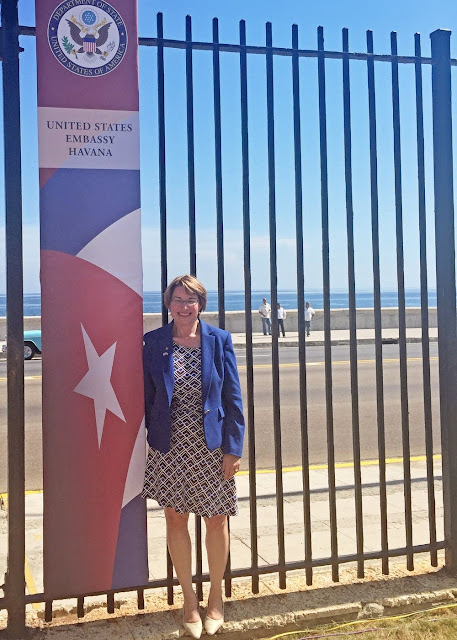 Senator Amy Klobuchar proudly posted this photo on her Senate website. It shows her in Havana celebrating the reopening of the United States Cuban embassy that had been closed ever since 1961.