It Was Doomed From The Start 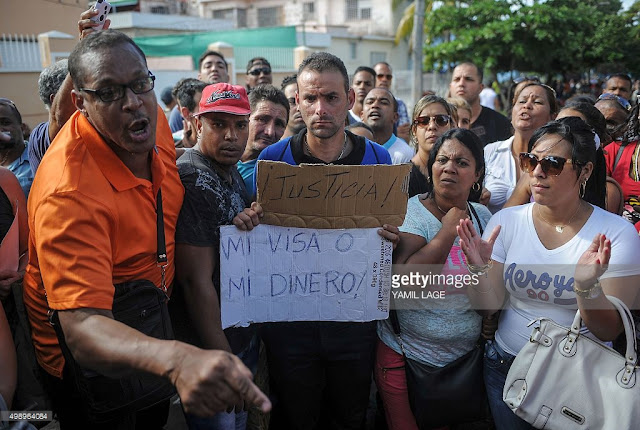 This photo was taken yesterday -- Friday, November 27th, 2015. It shows angry Cubans protesting at the Ecuadorian embassy in Havana. The sign, translated to English, reads: "Justice! My visa or my money." Ecuador had been the only nation that allowed Cubans onto its soil without a visa. But that, coupled with fears that U.S.-Cuban detente might spell the end to United States laws that favor only Cubans, prompted thousands of Cubans to fly to Ecuador and then trek north before finally stepping onto U. S. soil at the Mexican border. Cubans, and only Cubans, have permanent U. S. residency and instant welfare the moment they step onto U. S. soil. Thousands were on that journey till they were stopped by Nicaragua at its border with Costa Rica. Tired of the turmoil, Ecuador changed its no-visa rule for Cubans. These Cubans still in Havana were demanding either their visas or the prompt return of the money they had paid for them. 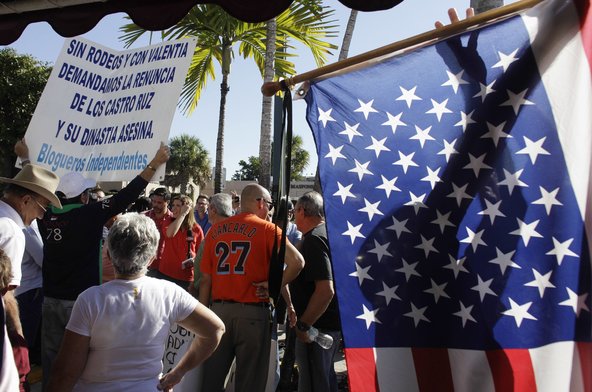 The New York Times this week used this photo to show anti-Cuban demonstrations in the section of Miami known at Little Havana. From Kennedy in 1963 to Carter in the 1970s to Clinton in the 1990s, Democratic U. S. presidents have tried to normalize relations with Cuba. Each time fierce opposition, originating in Miami's Little Havana neighborhood and then easily extending to the U. S. Congress, has not only stopped those plans but resulting conflicts have been used to sharply strengthen America's anti-Cuban policy. That's why the 1966 Cuban Adjustment Act was followed by the Torricelli Bill and the Helms-Burton Act -- all essentially dictated to the U. S. Congress by Fidel Castro's most visceral Miami opponents. {To fully understand those congressional laws you need to study two seminal books: Ann Louise Bardach's "Cuba Confidential: Love and Vengeance in Miami and Havana" and Julie E. Sweig's "What Everyone Needs to Know About Cuba."}. Those decades-old congressional laws have had two purposes: {1} to hurt Cuba; and {2} to enrich and empower Cuban exiles and Cuban-Americans. They have succeeded in both ventures -- hurting Cuba while enriching and empowering Cubans who defect to the U. S. For example, since 1966 what is known as the Wet Foot/Dry foot law encourages Cubans to defect to the U. S. and once their front foot touches U. S. soil they have permanent residency and instantly begin receiving welfare. That law benefits only Cubans and discriminates against all other would-be migrants, not to mention unwitting U. S. taxpayers. It also casts, around the world, an undemocratic image of the U. S. Yet, Wet Foot/Dry Foot has prevailed since 1966 and it will remain. The conflict on the Costa Rica-Nicaragua border is merely an ephemeral offshoot. If it doesn't end Mr. Obama's detente, something else will soon evolve that will. 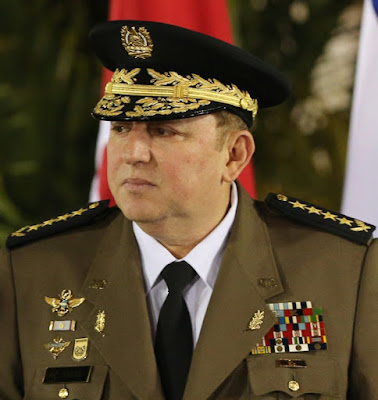 This is Nicaraguan General Julio Cesar Aviles. It is his soldiers that have blocked the border between Costa Rica and Nicaragua. He says, "People entering or passing through Nicaragua must do it legally. That includes Cubans benefiting from special United States laws that harm everyone else, creating real chaos." 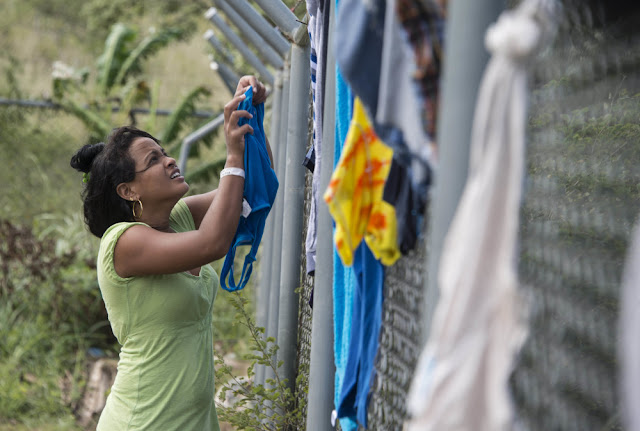 This AFP photo shows a Cuban woman, stranded at the Costa Rican-Nicaraguan border for a week, drying her clothes yesterday. She is now just one of thousands in the same very irritating predicament. 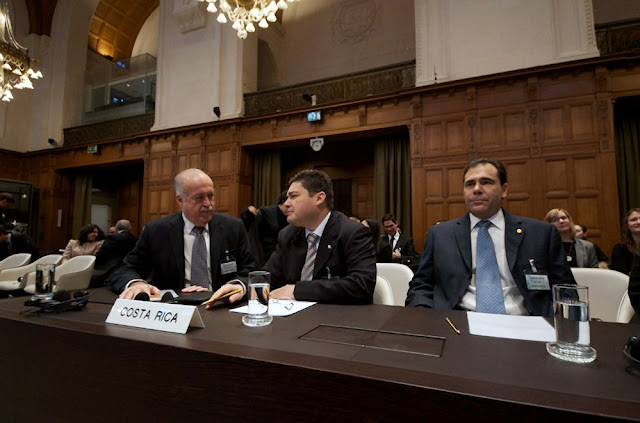 This AFP photo shows Costa Rica's Ambassador to the Netherlands, Jorge Urbina, testifying at the International Court in the Hague concerning Costa Rica's heated border disputes with Nicaragua that date back to 2010. Now the blocking of Cubans at that border by Nicaraguan soldiers is tossing fuel onto the smoldering flames and bringing other nations into the fray to try to de-escalate the rising tensions. 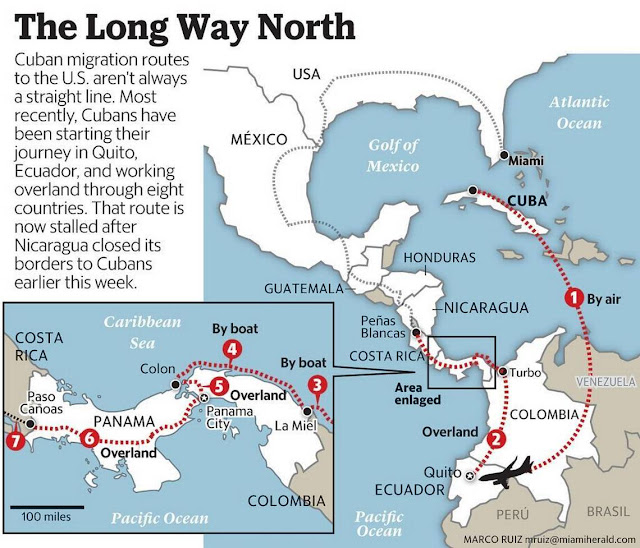 This Marco Ruiz/Miami Herald graphic explains why many Cubans are stuck at the Costa Rica-Nicaragua border. The juicy 1966 Wet Foot/Dry Foot law this month had a confluence with President Obama's efforts to normalize relations with Cuba, causing many Cubans and many human traffickers to think that lucrative incentives for Cubans only might finally end. Ecuador, till this week, was the only nation that allowed Cubans to fly in without a visa. Then from Ecuador they would travel north through Colombia, Costa Rica, Nicaragua, Honduras, and Guatemala to reach the U.S.-Mexican border where they would be home free with welfare the moment they touched U. S. soil. But Nicaragua, one of Cuba's closest allies, altered those plans just a bit by closing its border with Costa Rica. It's a headache the region didn't need. 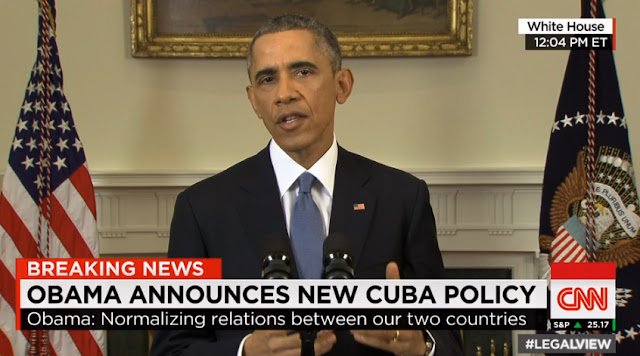 It was at high noon on Demceber 17th, 2014, that President Obama went on television to tell the American people that he and Cuban President Raul Castro had agreed to normalize relations between the two countries. Indeed, since the Cuban Revolution chased the Batista-Mafia dictatorship off the island {mostly to Miami} on January 1, 1959, Obama has come much closer than his ten predecessors to actually normalizing relations with the largest Caribbean island. He took Cuba off the Sponsors of Terrorism list; he exchanged notable Cuban prisoners in the U. S. for two notable American prisoners in Cuba; he orchestrated the reopening of embassies in Havana and Cuba for the first time since 1961; he removed some of the restrictions on Americans visiting Cuba; etc. However, President Obama -- like the three previous Democratic Presidents Kennedy, Carter, and Clinton -- will discover a hard fact of life regarding Cuba: There are too many people making too much money from America's Batistiano-like Cuban policy for him to change it anymore than he already has. In fact, when Kennedy, Carter, and Clinton tried to change it, they were so powerfully rebuked that harsher anti-Cuban laws resulted each time -- such as The Cuban Adjustment Act, Wet Foot/Dry Foot, The Torricelli Bill, and The Helms-Burton Act. The same thing will happen to President Obama's honorable efforts regarding Cuba. Sure, the impasse on the Costa Rica-Nicaragua border will resolve soon enough, but other provocations are just around the complex Cuban corner. 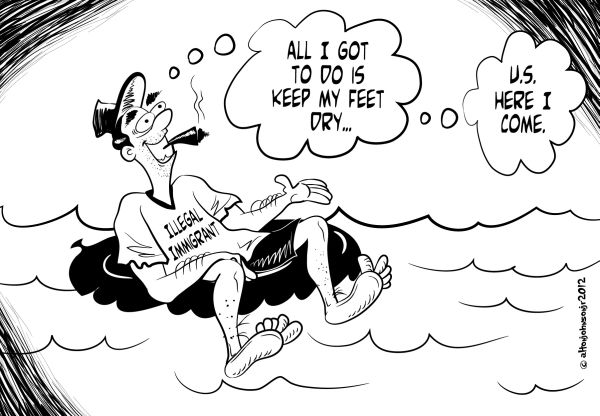 Cubans enticed to defect to the United States are not the only ones laughing out loud at U. S. laws -- such as Wet Foot/Dry Foot -- designed to enrich and empower Cubans and only Cubans. The rest of the world, except for the embarrassment it causes America's best democratic friends, is laughing out loud too. 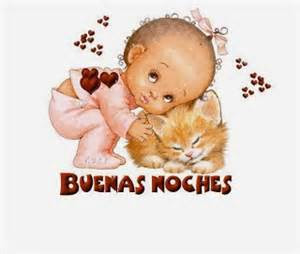