Cuba Squeezed Between U. S. and Russia 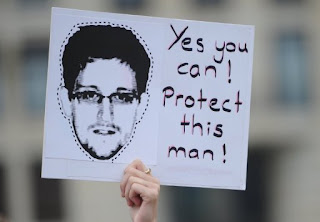 The ongoing saga of 30-year-old Edward Snowden has thrust Cuba into the chasm that separates nuclear powers America and Russia, reminiscent of the Cold War era. The U. S. considers Snowden a fugitive of the first order for releasing a batch of embarrassing intelligence data amassed by the National Security Agency. Snowden for three weeks has been holed up in a Russian airport but he seeks asylum in Venezuela, Bolivia, or Nicaragua -- three close Cuban friends -- but fears any flights on the way to those destinations might be interdicted by American jets or jets of American allies. However it evolves, anti-American and human rights organizations will champion Snowden's efforts to bring transparency to the operations of the world's great democracy. In the photo above, a typical sign featured in a major pro-Snowden march near the Brandenburg Gate in Berlin resulted from international news that U. S. allies had dangerously refused to allow a plane carrying Bolivia's President to fly over their territory because it was suspected Snowden might be on board. That Berlin demonstration might be a harbinger of what will come if the U. S. is perceived as bullying Snowden or as a democracy saddled with shielding nefarious deeds. 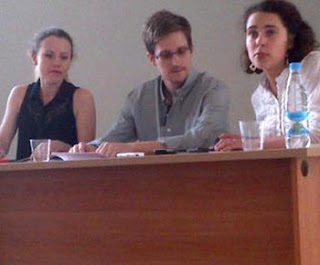 This week Snowden held an international news conference at the Russian airport. Flanked by human rights activists he expressed fear for his future on a day U. S. President Obama phoned Russian President Putin to ask the old KGB chief not to shelter Snowden, who has considerable international support. 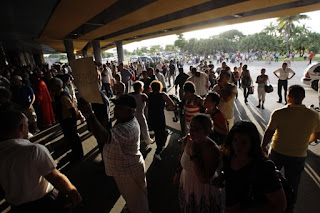 This REUTERS/Desmond Boylan photo shows a crowd, including journalists and spies, at Jose Marti International Airport in Havana this week awaiting passengers from an incoming Russian airplane. 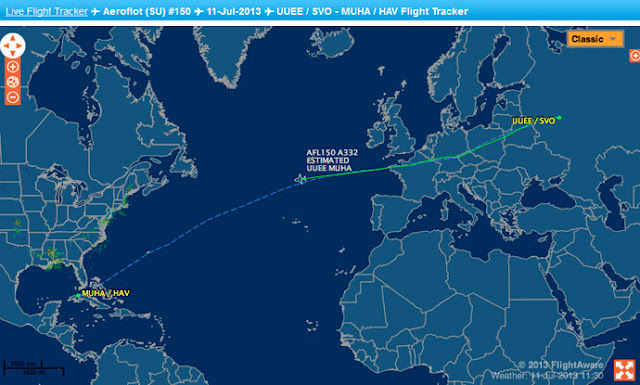 Russia's Aeroflot airline has five weekly flights from Moscow to Havana with this the most direct route. 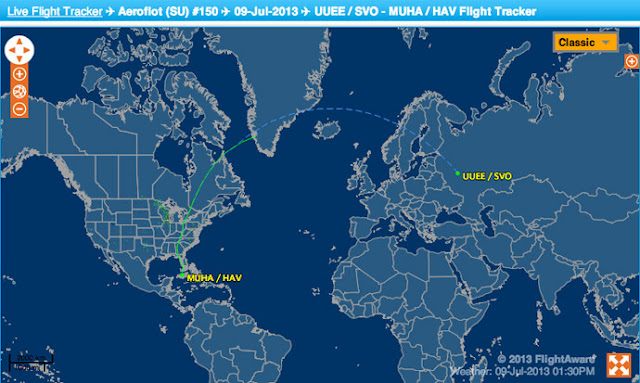 But this is the normal route Aeroflot planes take in flights to Cuba, meaning they fly over major stretches of Canadian and American land. Would the U. S. intercept such a flight if Snowden was on board? 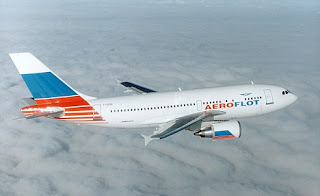 But Aeroflot does not fly into Venezuela, Bolivia or Nicaragua -- the presumptive Snowden destinations. Thus, Cuba is the logical transit point. But the island is seeking to improve relations with the U. S. and is a major U. S. ally when it comes to battling drug and human trafficking as well as recently returning fugitives from the U. S. over to American authorities. And Russia is a real big boy not as easily bullied as an island. 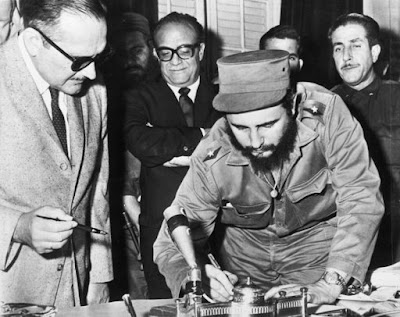 The above photo was taken on February 16, 1959. It shows Fidel Castro signing the Instrument of Office document in Havana naming himself Cuba's Prime Minister. Standing to Fidel's right ready to sign was Cuban President Manuel Urrutia, a judge who had backed Fidel's rebel movement that overthrew the dictatorship of Fulgencio Batista on January 1, 1959. From Jan. 1-1959 till Feb. 16-1959 the U. S. didn't know exactly how to deal with the popular and newly famed Fidel. From Feb. 16-1959 till today, however, the U. S. has not been so undecided. Before and after ousting Batista Fidel considered a democratic Cuba. 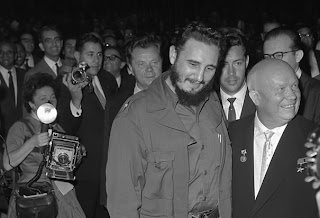 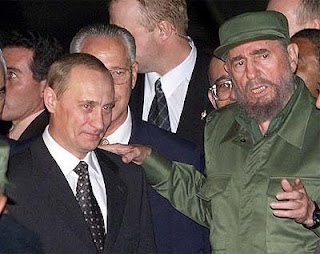 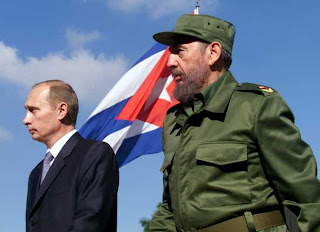 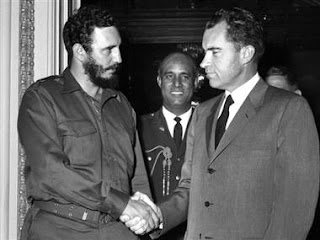 A perplexed, flummoxed Fidel in April of 1959 listening to U. S. Vice President Richard Nixon.
This was the pivotal moment when Nixon told Fidel, "We'll recapture Cuba within three weeks." 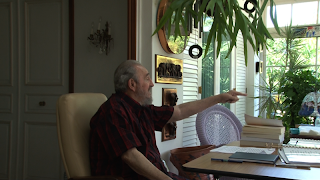 Fidel was never overthrown but a corrupt Nixon presidency was. 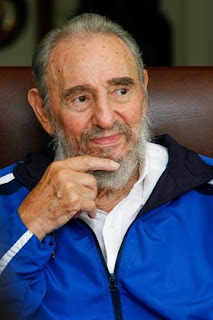 So, Fidel had the last laugh, or smile, when it comes to the Richard Nixon boast in April of 1959. 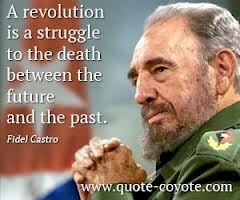 The impact of Fidel's revolutionary legacy will also outlast Nixon's political legacy.
In fact, Fidel's legacy may retard U. S. influence in Latin America for decades to come. 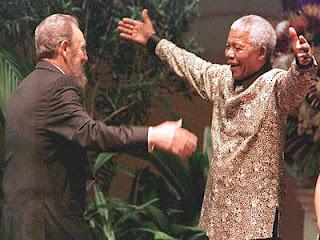 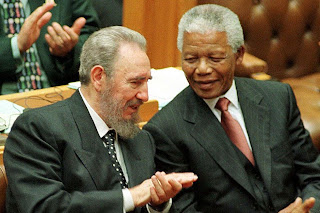 For decades, the two men have stayed close and communicated often, even through dire illnesses. 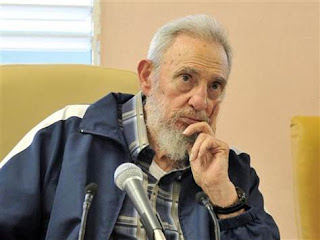 Fidel Castro turns 87 in less than a month, on August 13th. He has many things to ponder....
...Nixon, Khrushchev, Putin, Snowden, Obama, Mandela. Many things. 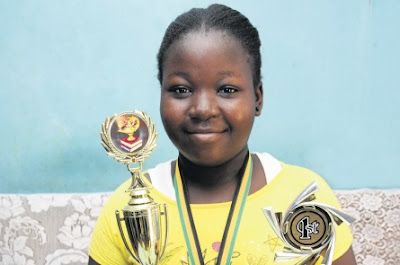 Latonya scored 99.6 over-all with 99 in mathematics, 100 in science, 99 in Social Studies, 100 in Language Arts, and a perfect 12/12 in Communication Tasks! Latonya attends St. Jude's Primary School and she lives in the inner-city community of Olympic Gardens in Kingston. She is a Caribbean jewel.

Congratulations, Latonya, for being beautiful, dedicated, palpably focused, and SMART! 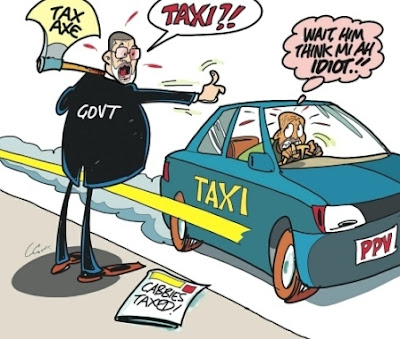 And by the way, the Jamaica Observer daily features the world's best and most topical political cartoons. This week the government raised taxes on the island's taxi drivers. The cartoon above {Sunday, July 14th} shows a driver's reaction to the government official who, the driver believes, does things like that because he believes the majority of people on the island are cowards and idiots for putting up with it.
********************