To Appease A Few Cuban-Americans!!

As Americans Programmed To Say "OK" 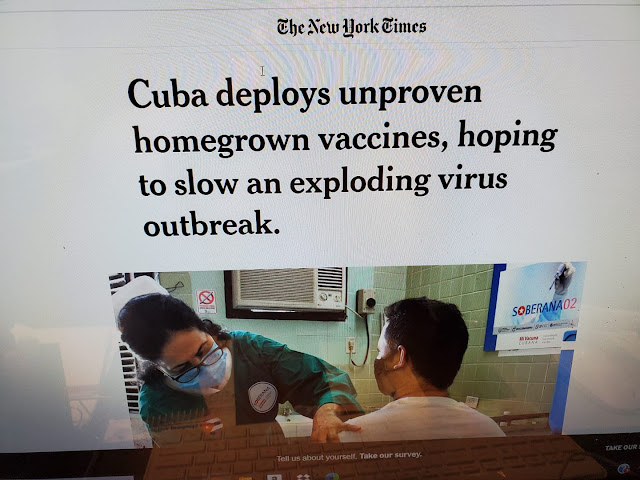 Today -- May 12, 2021 -- even the New York Times used the article depicted above to join the chorus of major foreign newspapers to mention that the USA is taking advantage of the Pandemic to further expand its genocidal Blockade of Cubans on the island to appease a handful of Cubans named Rubio, Menendez, Diaz-Balart, etc. Meanwhile, 330 million Americans are programmed to support or condone genocide against masses of people in Cuba as long as it benefits or whets the revenge motives of a few "real nice" Cubans in the United States in Little Havana or in the U. S. Congress. At least this New York Times article today, written by Ed Augustin, had the guts to mention that the U. S. Blockade of Cuba is taking advantage of the Pandemic to further put the squeeze on Cuban families on the island. 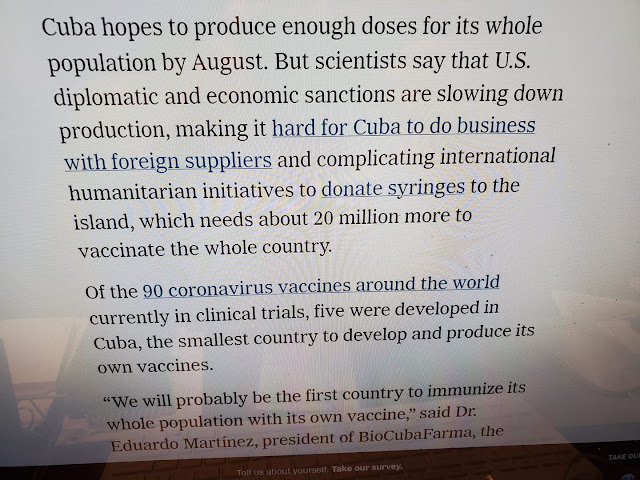 For showing some rare courage and integrity in reporting about Cuba, I guess the New York Times and Ed Augustin should be congratulated. In the three paragraphs shown above they implied that a handful of benefactors in a Superpower nation should not be allowed to take advantage of a deadly Pandemic to enlarge its genocide against innocent families in a much smaller nation, even if that nation is Cuba!!! Wow. {Now I'm wondering if the New York Times got permission from Rubio, Menendez, Diaz-Balart, and Claver-Carone before publishing an article today that shows a little compassion for families in Cuba that are facing the dreaded perils of genocide?}.

Each day this week Cuban television has had to inform its viewers that the island is now having about 13 deaths {fallecidos} from the COVID pandemic. Until Cuba opened its airports to international tourism back on March 15th, the island was going days without any deaths from COVID. But now, I assume, the Cuban-Americans in the U. S. Congress and in the Biden White House are pleased to know that genocide related to their endless Blockade is severely assaulting Cubans on the island.