The 2 Sides of Cuba

Both Sides Are Pertinent! 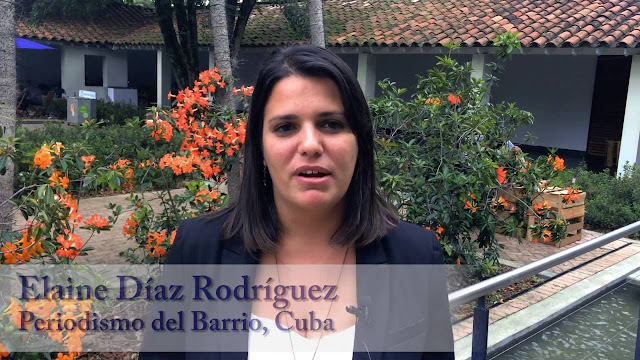 To know a 31-year-old Cuban named Elaine Diaz Rodriguez is to know that there are two sides to Revolutionary Cuba {1959-2017}. Elaine is a journalist on the island, and a good one. She is Editor-in-Chief of the Havana-based independent news digital magazine Periodismo del Barrio. More so than U. S. journalists who report on Cuban issues, Elaine writes copiously about Cuban positives and negatives. Yes, she has been "detained" by Cuban authorities because of her fair-minded journalism. But she also has the integrity and guts to write about Cuba's revolutionary positives, separating her from much-better-funded, foreign-backed counter-revolutionary journalists and dissidents such as...Yoani Sanchez, Laura Pollan, El Sexto, etc. Therefore, to not know Elaine Diaz today is to not know both sides of Revolutionary Cuba.

For the last couple of decades, Fernando Ravsberg has been the most respected journalist reporting from and about Revolutionary Cuba. Like his disciple Elaine Diaz, Fernando covers both sides of the enigmatic Caribbean nation. His blog -- "Cartas Desde Cuba" {"Letters From Cuba"} is the best Cuban blog, with many of his articles getting international coverage. He has also written for the BBC, NY Times, etc. 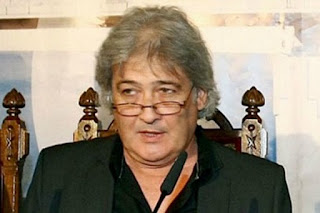 So, when Fernando Ravsberg writes about Revolutionary Cuba, people read and heed -- or at least they should. For example, his Oct. 26-2016 article -- still online -- was entitled: "The Cuban Government's Communicative Strategies." He wrote: "In 1990, it was impossible to work without credentials. Today, there are Cubans working for the world's largest newspapers without having to ask anybody for permission. New blogs are created everyday that inform Cubans, from Cuba, about a country that doesn't appear in government media. We are told stories with the freshness of somebody who lives immersed in Cuban life and who doesn't have to ask for permission to write or authorization to publish their work." That Ravsberg-documented fact-of-life in today's Revolutionary Cuba is not-supposed-to-be-known in the United States, one key reason I maintain that the Cuban Revolution says a lot more about the United States than it says about Cuba. Two generations of counter-revolutionaries from the Batista-Mafia dictatorship have controlled the U. S. narrative about Cuba, assisted by an intimidated or largely incompetent U. S. media as well as vast and hugely funded counter-revolutionary propaganda machines such as the blog Capitol Hill Cubans, Washington Times, Breitbart News, Fox News, MSNBC, CNN, etc. If you depend on any such sources for your Cuban updates, you will soon be believing that Revolutionary Cuba spends most of its time torturing, imprisoning, and murdering its citizens...and if there happens to be a pre-arranged staged photo or video showing a Cuban soldier or policewoman restraining a dissident, ALL THE BETTER! Revolutionary Cuba is one of the world's safest nations but WHEN IT IS NOT SAFE Americans need to get such reports from the BBC, Reuters, or other top non-American news outlets. Or from Fernando Ravsberg or...Elaine Diaz. 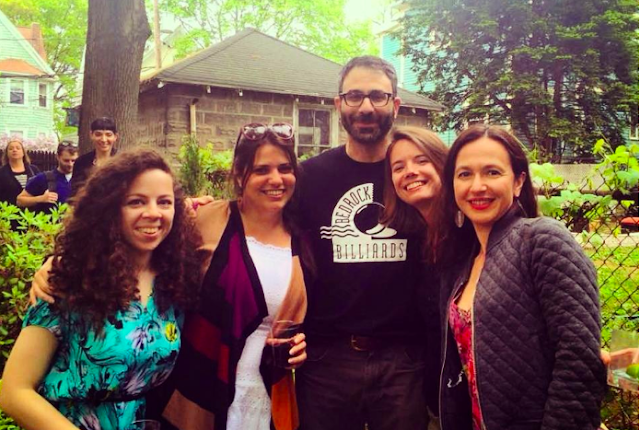 This photo shows Elaine Diaz...she's second from the left...and other Cuban journalists just before they were arrested-detained in Guantanamo City, which is just outside Guantanamo Bay. In the aforementioned Fernando Ravsberg article, he referenced that detainment but also told both sides of the story. 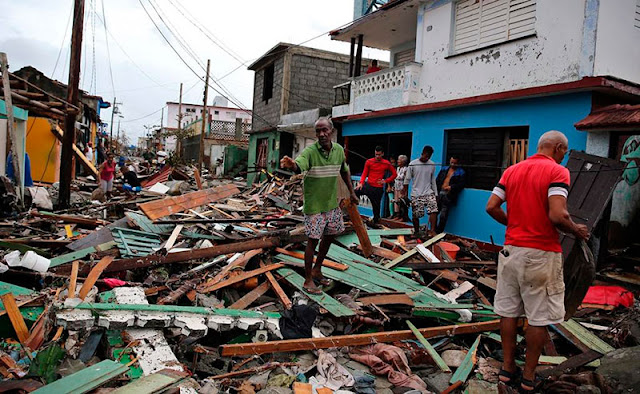 Elaine Diaz and the other four detained journalists were earnestly covering the severe devastation, as depicted above, caused by mighty Hurricane Mathew in Guantanamo Province in October of 2016. 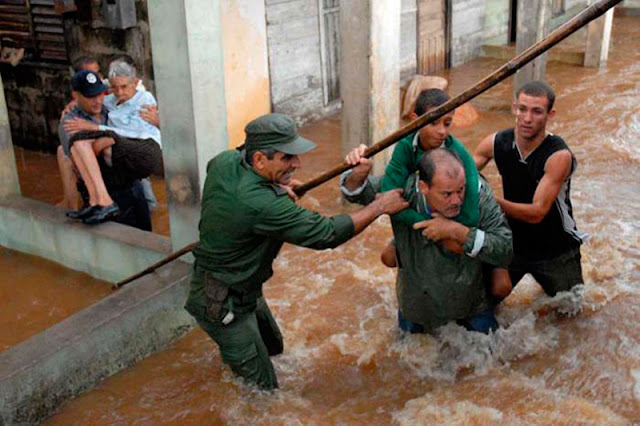 Even U. S. journalists have pointed out that the U. S. and other nations should study Cuba's rescue efforts during natural calamities, such as the effects of Hurricane Mathew depicted above. It is generally accepted that Cuba's rescue operations are the best, even "amazing" according to one NY Times article related to Hurricane Mathew. Cuba only briefly "detained" Elaine Diaz and the other Cuban journalists and then explained it did so "only because rescue operators complained that journalists were interfering with their important work," which is shown above as the rescuers rescued old and young Cuban civilians. 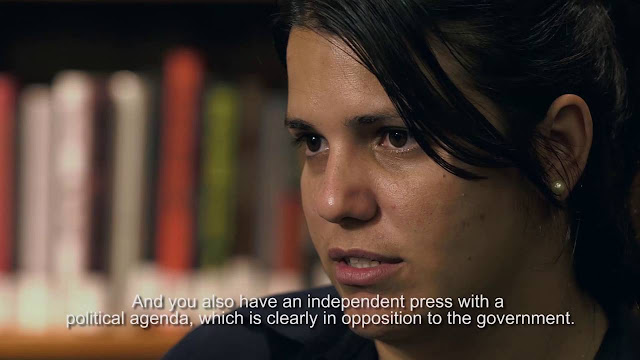 To be sure, as a fair-minded Cuban journalist Elaine Diaz complained about being detained in Guantanamo City but she also presented the other side of the story, which was the government's desire to have the rescuers do their work without interference. Agreeing with the fair-minded Fernando Ravsberg, Elaine Diaz -- with the above quotation -- confirms that Cuba has an "independent press" that can be "in opposition to the government." She is also well aware that in the United States there are newspapers, all three cable news operations and right-wing operations such as Capitol Hill Cubans, Breitbart News, etc. that wouldn't dare report on both sides of two-sided Cuban stories but only on a badly slanted negative side. 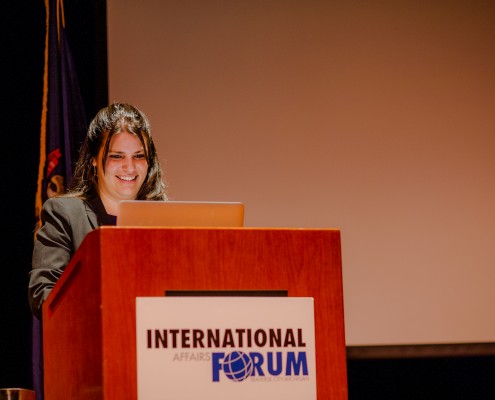 An excellent speaker, Elaine Diaz as well as Cuban journalists such as counter-revolutionaries like Yoani Sanchez travel to the United States and other nations and then return to do their work in Cuba. So the well-educated Elaine Diaz is well acquainted with American journalism and American politics. This historic week, Elaine's primary article was entitled: "Dear Donald Trump: A Letter From Cuba." She concluded her long letter with these exact words:
"It is your duty, Donald Trump, as the President of the United States of America, to represent all of your citizens and not only a couple of politicians who keep speaking on behalf of the Cuban people without having ever set foot on the island.
"It is my president's duty to represent all Cuban citizens, even those who have left the country for economic or political reasons.
"Both leaders {Raul Castro and Barack Obama} have spoken loudly: We want relationships, we want embassies, we want the negotiations to keep going, we want to reach an agreement in every area and we are open to dialogue. We want people to be close, not far. We want to build bridges, not walls."
Those words in quotation marks above are the exact words that closed Elaine Diaz's long letter/advice this week to America's new President, Donald Trump. Elaine Diaz represents the emeging power of independent journalism on the island of Cuba and she understands the rhythms, hopes and dreams of her fellow citizens. When she disagrees with the government, she says so. And when she agrees with the government, she says so...not as a counter-revolutionary but as a journalist. In 1976 the top Cuban-American journalist in Miami, Emilio Milian, was car-bombed after he voiced opposition to such terrorist acts as the bombing of the civilian Cuban airplane Cubana Flight 455. American journalists today who are too afraid to address such things as the car-bombing of Emilio Milian and its aftermaths are, of course, unafraid and even anxious to assail Revolutionary Cuba for far less violations of human rights. 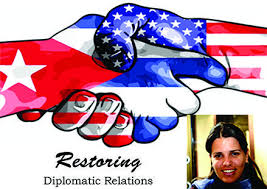 So Americans who don't want to know who Elaine Diaz is and who want to only get their Cuban news from the likes of Breitbart News or Capitol Hill Cubans, fine. Meanwhile, with a ready passport and American options galore before her, Elaine Diaz is intent on remaining in Cuba as an independent journalist telling both sides of Cuban stories. At the same time, study the graphic above that depicts who Elaine Diaz is: The HUGE U.S.-Cuban handshake; a plea for Restoring Diplomatic Relations between the two neighboring nations; and a smiling photo of a hopeful Elaine Diaz. As a journalist and as a human being, she is a cut above the minority of Cuban-Americans and Americans who want to destroy Elaine Diaz and her Revolutionary Cuba even as their salacious motives and policies create a resounding 191-to-0 condemnation of America's Cuban policy in the United Nations. As Elaine Diaz suggested this week in her letter to U. S. President Donald Trump, he has a plethora of American problems to deal with before he mounts his anticipated regime-change schemes in Cuba. The last U.S.-backed Cuban government -- the 1952 to 1959 Batista-Mafia dictatorship -- may be forgotten in America but Elaine Diaz won't forget it.