Would Benefit Americans & Others 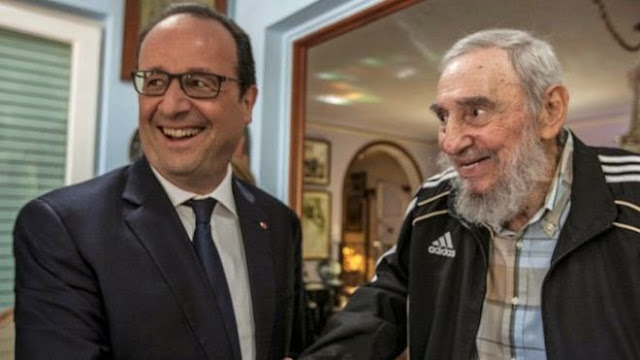 Francois Hollande, the President of France, finally got his wish yesterday. For years he has expressed a desire to meet Fidel Castro. Yesterday, even before he met with Cuban President Raul Castro, President Hollande insisted on being driven to Fidel Castro's home. The French leader was giddy with delight when he was told that Dalia, the 88-year-old Fidel's wife, confirmed that "Fidel is well-rested and very anxious to see you." After spending over an hour with Cuba's revolutionary icon, President Hollande was still giddy. He tweeted in French to Laure Bretton, a journalist: "I had in front of me a man who made history!" 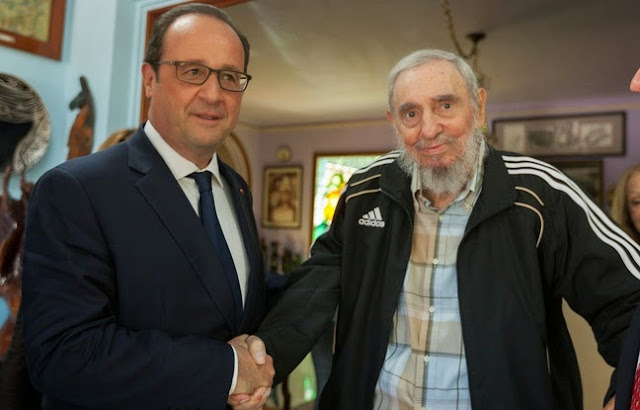 Francois Hollande with "the man who made history." 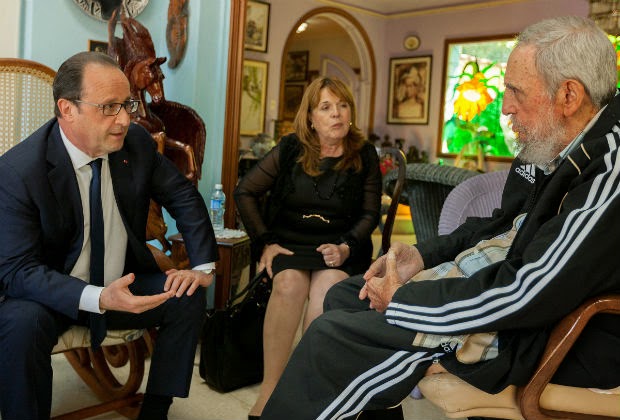 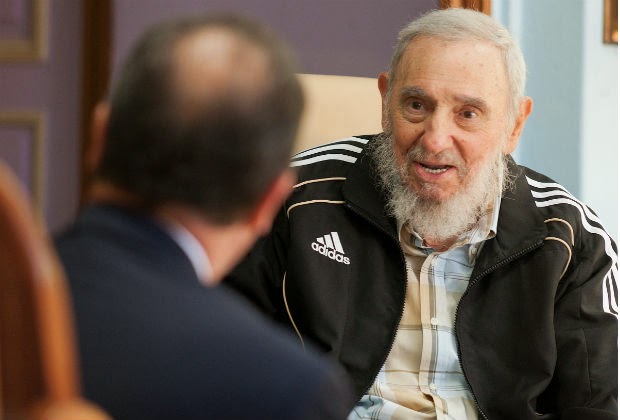 A close-up of Fidel Castro talking to Francois Hollande on Monday, May 11th.
Fidel's son Alex takes all the photos inside the Castro home.
{Adidas needs to sign an endorsement deal with Fidel Castro} 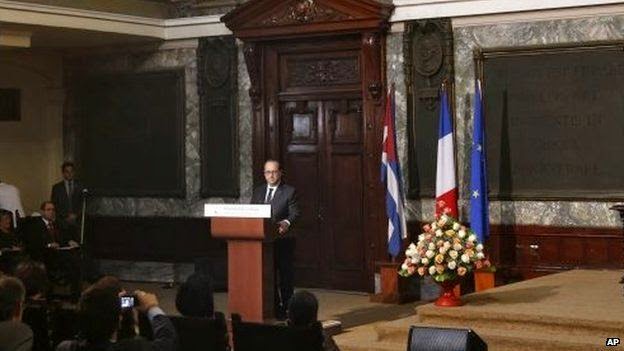 After meeting Fidel Castro, French President Francois Hollande {above} made a stirring address at the University of Havana. He said, "All the world, including France and the European Union, applauds what President Obama is trying to do against great odds to help Cuba's people. The U. S. embargo and other damaging aspects of America's Cuban policy should be relegated to the dust-bins of history. The embargo for decades has damaged everyday Cubans on the island most of all, and it has damaged democracy's reputation." 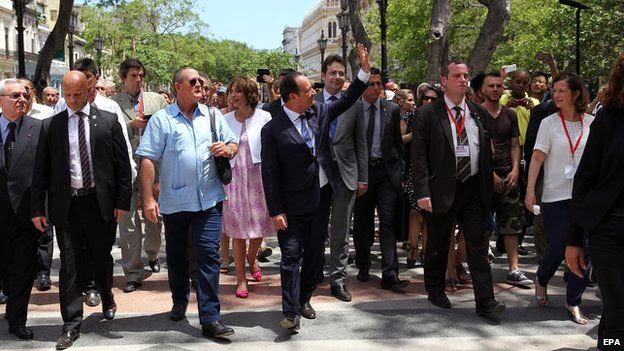 Mr. Hollande admitted he was "emotional" as he toured Havana yesterday. 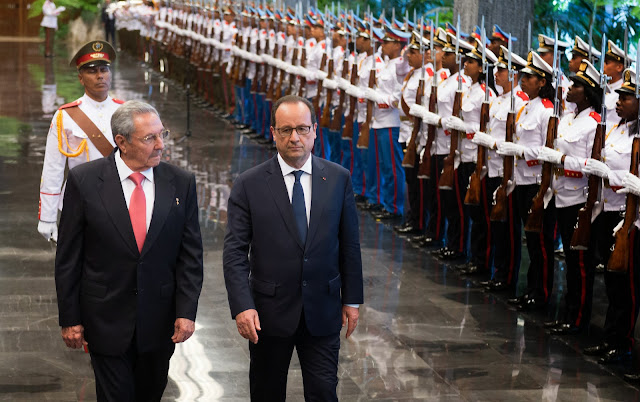 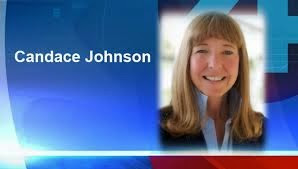 Candace Johnson has made headlines this week that explain how America's Cuban policy, dictated for decades by two generations of revengeful exiles from the overthrown Batista-Mafia dictatorship, has harmed the vast majority of Cubans and Americans. Ms. Johnson is the CEO of New York's Roswell Park Cancer Institute. Typical of the headlines she is generating is: "Cuba Has A Lung Cancer Vaccine -- and America Wants It!" That revelation is one of the many positive offshoots of President Obama's efforts to normalize relations with Cuba. When New York Governor Andrew Cuomo visited Cuba last month, Ms. Johnson made sure her Institute was represented. It signed a deal with Cuba's Center for Molecular Immunology regarding the lung cancer vaccine that Cuba invented and Ms. Johnson covets. "Because of the U. S. embargo," she says, "Cuba has had to do more with less, so they've had to be more innovative." She pointed out that, in addition to the lung cancer vaccine, Cuba has developed a plethora of drugs to treat Dengue Fever, Meningitis, kidney ailments, and many other medical problems. Ms. Johnson said, "Cuba has a preeminent immunology community that is ready, willing, and able to help Americans." 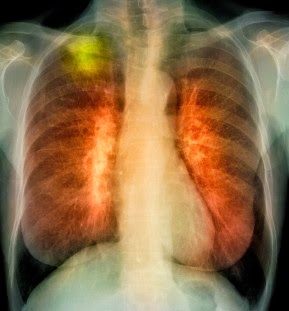 Cuba's "preeminent immunology community" has discovered not only a lung cancer vaccine but many other medical innovations that have helped millions of non-Americans. People like Candace Johnson at the Roswell Park Cancer Institute have believed for a long, long time that Americans, too, should be allowed to benefit from cooperating with Cuba, as opposed to their tax dollars continually being used to assail the nearby island. President Obama is trying to accommodate Candace Johnson and others like her but, of course, a handful of Cuban-American extremists believe they alone should dictate the American Cuban policy that the rest of the world abhors, not to mention decent Americans such as Candace Johnson. Her emphasis this week in maintaining how much Americans could be helped by Cuba's lung cancer drug is a reminder of what pusillanimous Americans, since the 1960s, have allowed a few Miami-Washington extremists to dictate even when the lives of innocent Americans are at stake -- such as the George W. Bush administration cruelly and stupidly refusing to allow Cuba's renowned 1500-person medical/rescue team to fly to New Orleans on the eve of Hurricane Katrina. However, regardless of what extremists do to Cuba, such as blowing up a child-laden civilian Cuban airplane, Americans are not supposed to have either the intelligence, the courage or the patriotism to raise a dissenting voice. Candace Johnson, at her Cancer Institute, is trying real hard to combat that blight on the U. S. democracy. 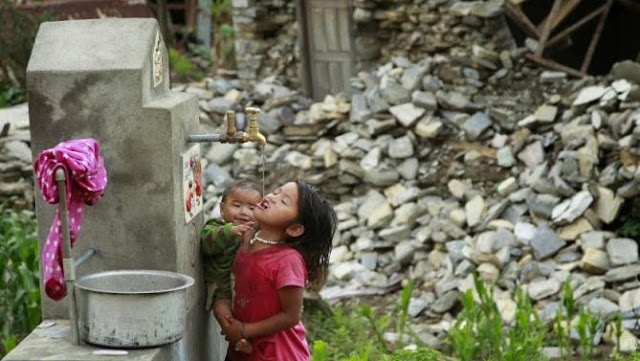 This, I believe, is the most gripping and most important photo I've seen this week. It was taken by Wally Santana for the Associated Press. The little girl holding the baby and sipping water from a spigot is in the Nepalese city of Balva, which was near the epicenter of the earthquake that destroyed Balva and killed well over 8,000 people in Nepal two weeks ago. Many nations quickly pledged billions of dollars in aid but aide-workers say little of the money has arrived and, in any case, they mostly need medicine and other supplies. And then last night, yet another 7.4 earthquake hit Nepal. Notice the smile on the baby's face as he plays with the necklace around the little girl's neck. I hope the little girl has been able to save herself and the baby, and I hope the world conspires to help them. Natural and man-made disasters around the world particularly affect the most innocent among us, such as these two precious Nepalese children.
******************************
- May 12, 2015