And, of course, America Too 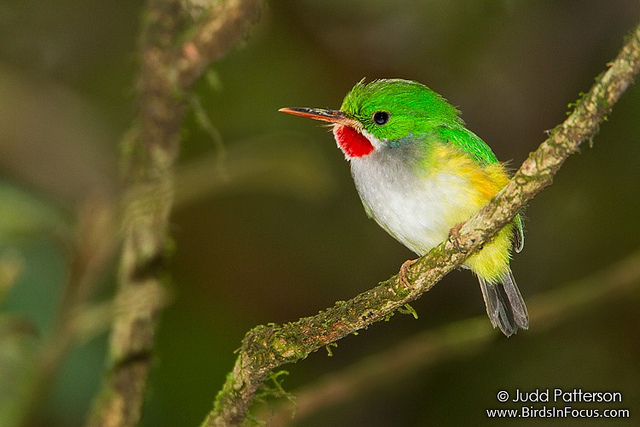 The island of Cuba is a prime location for bird watchers. The little guy above is a Cuban tody. The adults are always red, white, green, and yellow. The current edition of Birds and Blooms magazine raves about the tiny tody's vocarious appetite. An expert team of birders tallied between 924 and 1,596 insects one tody ate in one day! 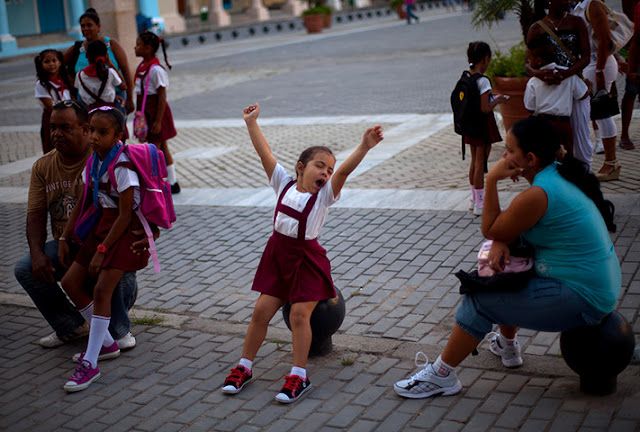 England's major newspaper, The Guardian, this week featured a huge pictorial highlighting the first day of the new school term for Cuban children. The photographer was Ramon Espinosa. In the photo above a mother watches her little girl exuding a huge yawn as they await entry into the school. 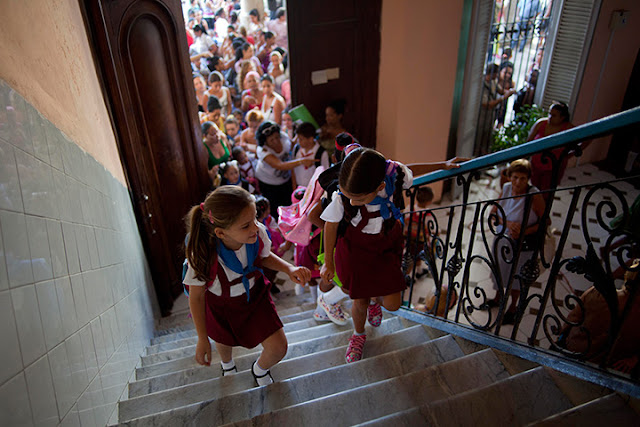 As their mothers anxiously observe, the two little girls above are mounting the stairs leading to their classroom. 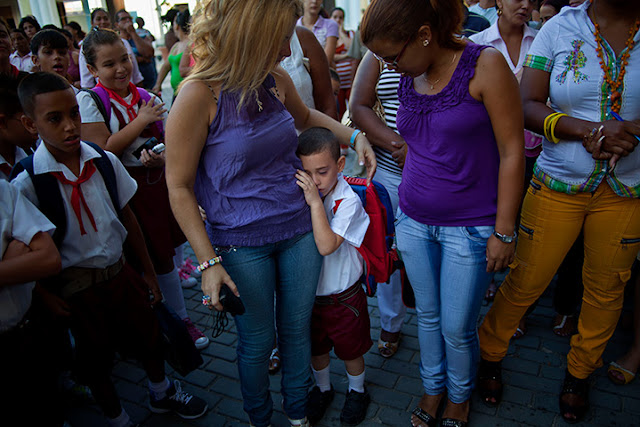 In the above photo, a mother and aunt console a little boy who is not quite ready to venture all alone into the vast unknown -- his first day in the first grade. 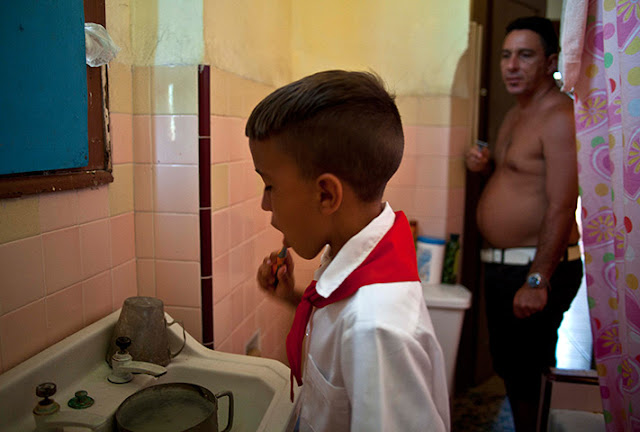 The third-grader above is all dressed for his first day back at school as his dutiful Cuban father makes sure his son brushes his teeth before embarking on the big day. All of which, unfortunately, is a reminder of the huge (and unnecessary) divide between Cubans on the island and Cuban exiles in Miami.......................... 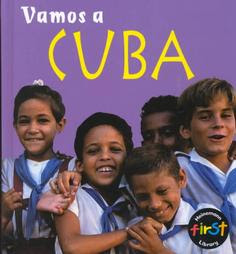 "Vamos a Cuba," the children's book depicted above, was banned [and removed from 34 schools) by the Miami-Dade County School Board, apparently because it showed Cuban children on the island actually smiling.  Americans, it seems, are not supposed to know that children on the island actually smile and, in fact, are actually loved. Of course, neither the ACLU nor the U. S. government mounted a defense of the little book, which is nothing more than one in a respected series of non-political children's books that introduce children in one country to those in a foreign country. 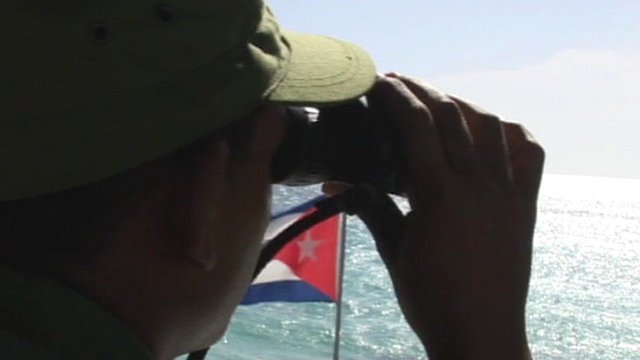 The London-based BBC, the world's most renowned news organization, this week used the above photo to illustrate a long article-and-video presentation stressing that Cuba is the one nation in the Caribbean with a "zero tolerance" for illegal drugs. Sara Rainsford was the reporter and producer. The BBC video revealed how the Cuban Coast Guard is the world's most diligent at both capturing drug-runners and then disposing of the drugs in furnaces while also taking possession of some really nice speed boats that then become efficient anti-drug tools.

Sara Rainsford and her BBC cameramen followed Yoandrys Gonzalez Garcia [above] on one of his typical days of battling illegal drug activity in Cuban waters. She began the article and video with these words: "The golden beaches of Cayo Cruz lie at the long path through a nature reserve. It is an idyllic stretch of Cuba's northern coast but this is key territory in the fight against international drug trafficking. Cuba sits between the world's major narcotics producers in South America and the biggest market for those drugs, the United States." [The report can be found at www.bbc.co.uk/news/world-latin-america-19538588]

The BBC's Sara Rainsford visited notorious drug-trafficker Boris Adolfo Busto [above] at Havana's Condesa Prison where he and dozens of other renowned traffickers are serving long prison sentences. Busto admitted that Cuban waters should be avoided by his compatriots still plying the drug trade. 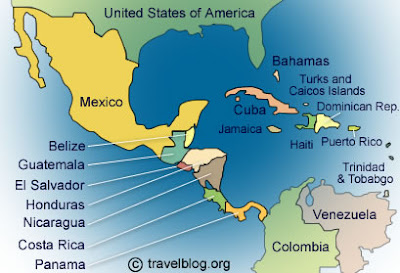 In a region notorious for drug-trafficking and the resultant plague of vicious criminals, Cuba stands out as a success story. Rainsford explained that Cuba routinely cooperates with the U. S. Coast Guard in its efforts to deter the drug cartels that have discovered the perils of using Cuban waters to transit their illegal drugs to their huge customer-base in the United States. The BBC report revealed why Cuba has virtually no drug or crime problem, something that the U. S. and its territories (Puerto Rico, for example) should, perhaps, aspire to. If Cuban forces don't catch traffickers in its own waters, it quickly alerts the U. S. Coast Guard to commence the chase. Such revelations regularly appear in the BBC but rarely in the U. S. news media because the BBC exercises its freedom to present positive as well as negative views of the island, whichever is considered both warranted and newsworthy. The BBC report stated: "Cuba has called for a formal co-operation agreement with the U. S. to help stamp out smuggling in both directions." Unofficially, the U. S. lauds Cuba for its cooperation in fighting drug trafficking but, in deference to radical Cuban exiles, refrains from publicly making such declarations. The BBC report also stated that European nations, recognizing Cuba's anti-drug diligence, not only help fund it but try to learn from it. The U. S. news media simply does not report such Cuban positives. 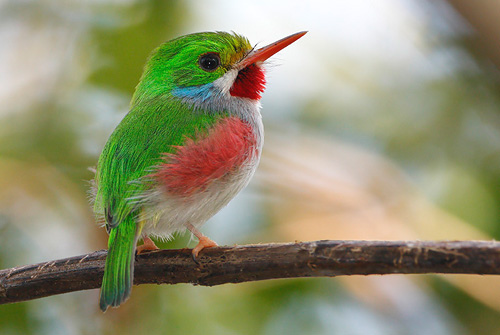 Meanwhile, here's another view of the Cuban tody, one of the world's most beautiful and most useful little birds. He is a mortal enemy of mosquitoes and other harmful insects while possessing looks, expertise, and grace that fascinates bird watchers. The tody is found only in Cuba and has never considered fleeing to South Florida. Yet, even the U. S. media gives him positive coverage.
******************************