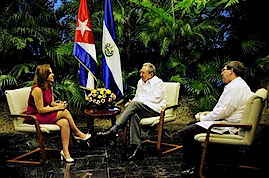 Dr. Vanda Pignato [above left] was a very important visitor in Havana today. 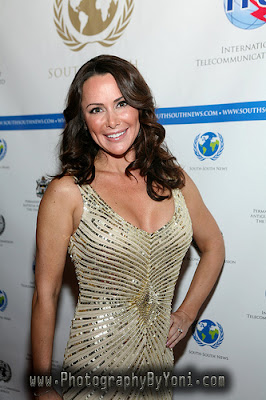 Dr. Vanda Pignato, to put it mildly, is a very interesting lady. For one thing, she is one of the planets most vociferous proponents of the Cuban Revolution, which she credits with inspiring two generations of Latin American women to "fully realize that we have enormous power far beyond the bedroom. So, it is up to us to use it or abuse it." Dr. Pignato, as you might imagine, has chosen to use it, not abuse it. She is today the powerful and very energetic First Lady of El Salvador.
Dr. Pignato's husband, 52-year-old Mauricio Funes, was inaugurated as the democratically elected President of El Salvador on June 1, 2009. On that very day, in keeping a promise he had made to his rather influential wife, President Fumes signed an order that resumed full diplomatic relations with Cuba. For the previous five [often very bloody] decades, El Salvador's right-wing leaders had followed U. S. dictates, refusing to have official relations with Cuba. So today [Sept. 19, 2012] in Havana, Dr. Pignato not only represented El Salvador as First Lady but also as her country's very friendly diplomat. She also represents a regional transformation. 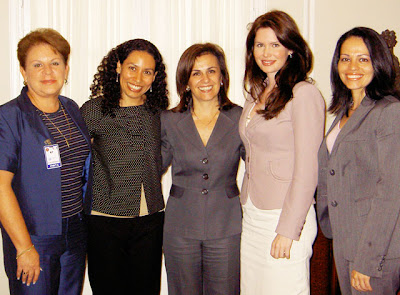 Dr. Vanda Pignato, shown above with four other prominent female wheelers-and-dealers in Latin America, has honored the Cuban Revolution and her gender as El Salvador's First Lady. Her prime focus has been fiercely devoted to improving the lives of the poor, especially the women and children in her country and the region. 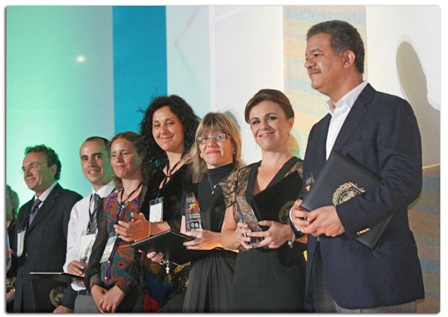 Dr. Vanda Pignato of El Salvador [above] was presented the 2011 Americas Award at the Renaissance Jaragua Hotel in Santo Domingo, the capital of the Dominican Republic. It was in recognition of her stellar work on behalf of women and children in Latin America, with the voting conducted by the United Nations Institute for Training and Research. 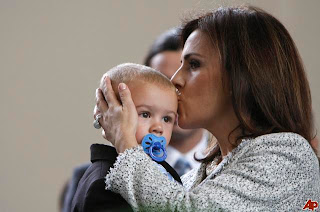 Dr. Vanda Pignato above is kissing her son Gabriel. 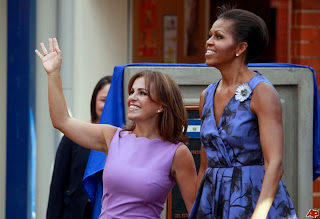 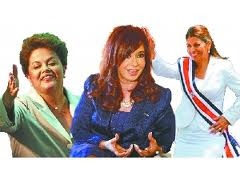 Three exceedingly important Latin American nations -- Brazil, Argentina, and Chile -- have recently democratically elected female Presidents, and all three have acknowledged that they were inspired by Cuba's three famed female fighters and revolutionary leaders. Hopefully, more nations will continue the trend because female leaders are generally less greedy than men and far less inclined to send young people to fight endless wars, and thus progressive Western nations like Germany and Australia have better leaders today than the males that dominated their past. Dr. Vanda Pignato herself is prime presidential material and if she reaches that plateau she will continue to thank Cuban women who, beginning in 1952, began the toppling not only of the brutal Batista/Mafia dictatorship in Cuba but also the puncturing of the long-held machismo dominance throughout the Caribbean and Latin America. 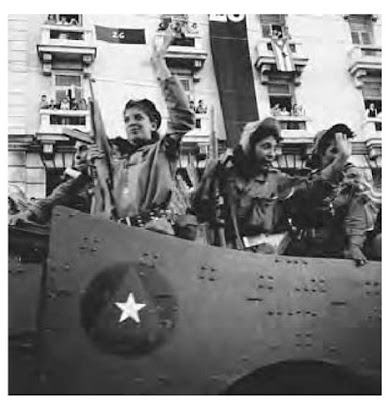 Women guerrilla fighters, as shown above, deserved to be the first rebel soldiers to take control of Havana in the first week of January, 1959, because these same women and their daughters were the first to take to the streets and denounce the brutality of the Batista/Mafia regime that particularly preyed on their children. 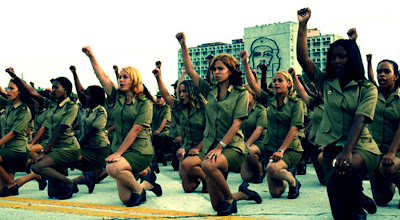 The Cuban Revolution was the first in history to create all-female fighting units and a half century later they are still prime defenders of Revolutionary Cuba.

The origin of the Cuban Revolution was stamped by Cuban women who took to the streets to denounce the Batista-Mafia dictatorship that, at the time, was considered invincible because it was supported by the world's superpower, the United States. The above march, in fact, emboldened and educated a young lawyer named Fidel Castro regarding the power, the bravery, and the fury of Cuban women. 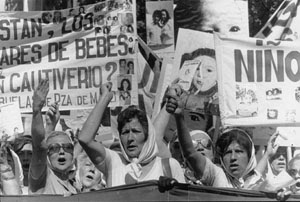 The most emphatic and the less surreptitious revolts in Latin America have been led by brave, outraged, upfront, unmasked women, with the precedent-setting 1950s Cuban Revolution at the forefront. If not for Cuban women, the Batistiano-Mafia control of Cuba would undoubtedly still exist to this day and, moreover, without them there would have been no model for other women to follow. Most male-oriented revolts hid behind ribbons of lies, such as, "We killed all those peasants because they threatened the region," instead of the truth, which usually was, "We killed all those peasants so we could steal their resources." Latin American female revolts were more honest and unflinchingly precise: "We will fight to the death to protect or to avenge our children." Ninos and bebes, not money and power, fueled female revolts. 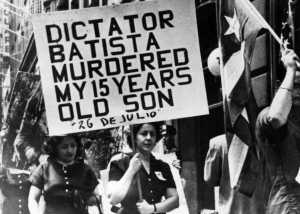 The biggest mistakes the Batista regime made in Cuba were infamous murders of Cuban children and then underestimating the reaction of their mothers. 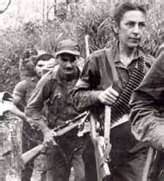 That's why females, like Celia Sanchez [above], were the best guerrilla fighters in Cuba's Revolutionary War, although that fact is dismissed by the machismo-leaning losers who find it preferable to blame their defeat on the more macho, and more easily pilloried, Fidel Castro. 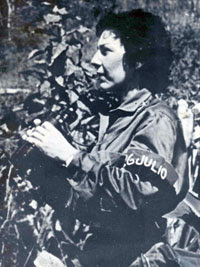 And that's why females, like Celia Sanchez [above], were the bravest and the most level-headed decision-makers in Cuba's Revolutionary War, although that fact, too, is dismissed by the machismo-leaning losers. 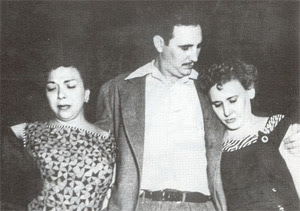 The biggest and most decisive contribution Fidel Castro made to the Cuban Revolution was his recognition that Cuban women, half of the island's population, were the prime victims of the Batista-Mafia dictatorship. Moreover, he believed, if afforded the opportunity, that feminine half of the population could turn the tide in the revolutionary war. That judgment was both unique and astute, and it will stand as the cornerstone of the Fidel Castro legacy. A young Fidel is shown above consoling two of those brutalized Cuban women -- Melba Hernandez and Haydee Santamaria. Melba and Haydee, of course, would later become fierce guerrilla fighters in the Revolutionary War. 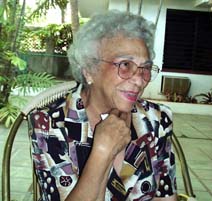 Melba Hernandez [above] to this day remains a staunch supporter of Revolutionary Cuba. If you ask her why, her reply will be, "If the alternative is Batista and the Mafia, there is, you know, no alternative." Ask her how, against all odds, she and the other rebels won, she will say, "We were the most motivated. That  proves, I guess, that money is not in all cases the greatest motivator."  Ask her how, against all odds, Revolutionary Cuba has survived all these decades and her answer will be, "Cubana Flight 455 and all the other motivations Miami has provided us."

Indeed, two generations of Cubans on the island, beginning on Oct. 6, 1976 [above], have been motivated by the terrorist bombing of Cubana Flight 455.

Liaena Hernandez, once all the nuances of Revolutionary Cuba are analyzed and then sifted through multiple lenses [including Marco Rubio's], is a fairly good bet to one day become the democractically elected President of Cuba. That's her goal and back in June a real Cuban insider, Fidel Castro, told his son Alex: "Let her know she has my blessing and my hope." That blessing and that hope, as well as that speck of clairvoyance, still has meaning on the island of Cuba. 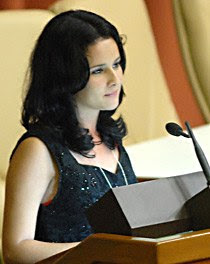 At age twenty-two, Liaena Hernandez already has a strong political voice in Cuba as an elected member of the National Assembly. Her influence among the island's youth seems to grow with each passing day. And that's the faction that will predicate Cuba's future path. If it's a peaceful march to democracy, Liaena will be content to wear pretty dresses, like the one above. But if it's a revolutionary path that would be necessary to defend the island against outside forces, Liaena still keeps her uniform handy, like in the photo above the podium photo. It's that spirit, rationale, and determination that makes her attractive to growing legions of youthful followers, and also attracted the attention and approval of the island's most famous old rebel who -- long, long ago -- took full advantage of Batista's most glaring mistake. And so, that's where we are today: The old rebel is very sick and 86-years-old; Liaena Hernandez is very healthy and 22-years-old. The torch will soon be passed...to her or someone like her if the much-maligned island is fortunate.
******************************