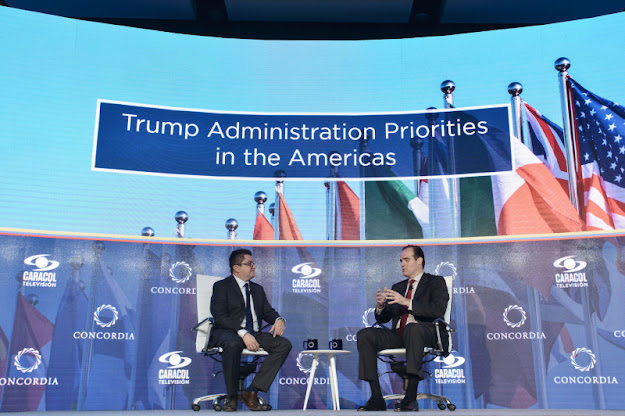 The photo above is courtesy of Gabriel Aponte/Getty Images. It is extremely important because it illustrates in September of 2020 that U. S. President Donald Trump, coveting Florida's vital 29 Electoral Votes in the Nov. 3rd-2020 presidential election, has finished making vicious anti-Cuban zealots in Little Havana/Miami the absolute dictators of not only the USA's Cuban policies but also the supreme dictators of the entire Caribbean and Latin America region. Back in the 1950s, a cowardly generation of Americans didn't object when right-wing Republicans teamed the U. S. democracy with the Mafia to support the brutal, thieving Batista dictatorship in Cuba so rich American companies could partake in the rape and robbery of the Caribbean's largest island. That insult to Democracy spawned the Cuban Revolution that, on Jan. 1-1959, shocked the world by chasing the Batistianos to their new sanctuary -- Little Havana in nearby Miami. Similarly in another insult to Democracy, in September of 2020 expect another cowardly generation now to not object as right-wing Little Havana zealots who control the Trump administration's Cuban policies have now also created a Little Havana dictatorship in all of Latin America.
The photo above shows Mauricio Claver-Carone, on the right, being presented to Latin America as its new dictator -- courtesy of U. S. President Trump's obsession to win Florida's 29 Electoral Votes on November 3rd. Claver-Carone is the most vicious anti-Cuban zealot in the United States. His hometown newspaper in Florida...the Naples Daily News...had an article entitled: "A Closer Look At The Man Advising Trump On Cuba." It explained that even when he was playing football at Bishop Moore High School, Claver-Carone would go "berserk" if he heard anyone mention "Fidel Castro" or the "Cuban Revolution." And since his high school days, Claver-Carone has devoted his entire adult life trying to overthrow Revolutionary Cuba and also destroy other governments considered pro-Cuba. Now as trade-off for Florida's 29 Electoral Votes President Trump has given Claver-Carone a chance to dictate Cuban policies and Latin American policies. 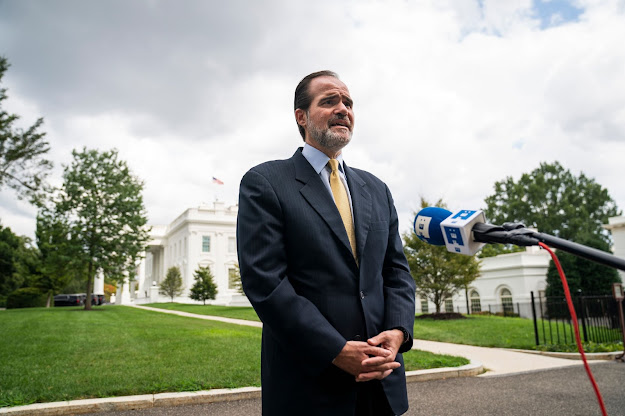 In that milieu, perhaps it is time that the remaining Democracy-loving Americans at least know who Mauricio Claver-Carone is and also care at least a little bit that President Trump has strong-armed Claver-Carone into the position as the Latin American dictator, with Claver-Carone's "berserk" obsession about recapturing Cuba for Little Havana remaining his paramount goal. 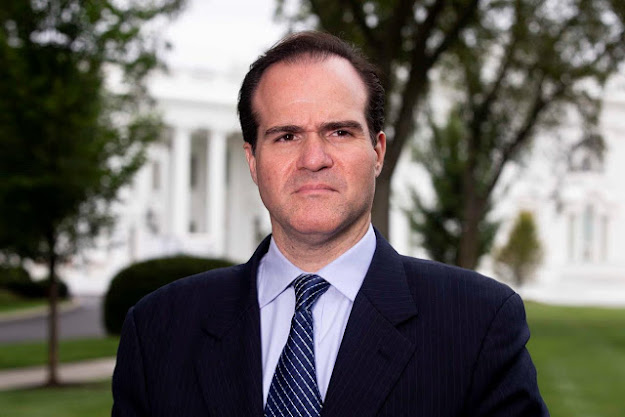 This weekend -- Sept. 12-13, 2020 -- extreme anti-Cuban zealot Mauricio Claver-Carone began a five-year term as the President of the World Bank, the powerful Washington-backed  Inter-American Development Bank. Since its existence, only people from Latin-American nations have been the Bank's Presidents, which was the rule till Trump broke standard procedure by strong-arming Claver-Carone into the position. Although right-wing governments in Brazil and Colombia are Trump disciples, all the rest of the bravest Latin Americans leaders literally cringe about Claver-Carone. Chile, Argentina, and other nations tried their best to prevent this insult to Latin America but 30 of the Bank's 48 governors voted for Claver-Carone, bowing meekly to the U.S.'s economic clout that is showered on such sycophants.

Once President Trump anointed Marco Rubio and Mauricio Claver-Carone...two lifetime zealots whose economic and political fortunes have been always tied to recapturing Cuba for Little Havana denizens...it has been well-known that their anti-Cuban fervor would spill over into the rest of the Western Hemisphere. Thus...as the great investigative journalist and Cuban expert Tracey Eaton has repeatedly revealed on his Cuba Money Project blog...a myriad of U. S. agencies, such as USAID, dole out tax dollars in the form of aid and, under Trump, allowing the likes of Rubio & Claver-Carone to be in on the DOLING has already had an impact...even prior to Claver-Carone taking over the plush job as the President of the World Bank. 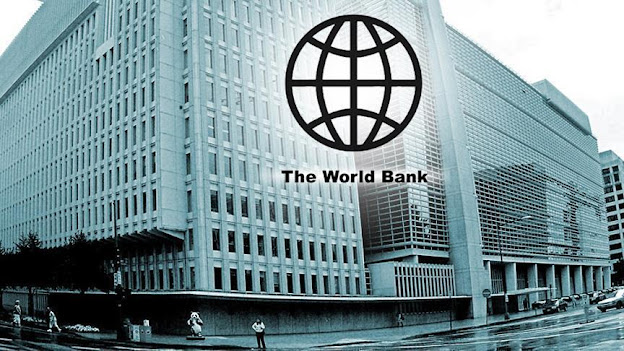 The World Bank is a massive force in Washington. The New York Times, in lamenting what Claver-Carone's reign as President will mean, said: "The position is one of the most influential in the region {Western Hemisphere}, involving regular contact with heads of state to dole out about $13 billion every year, and the presidency has always been held by a Latin American." 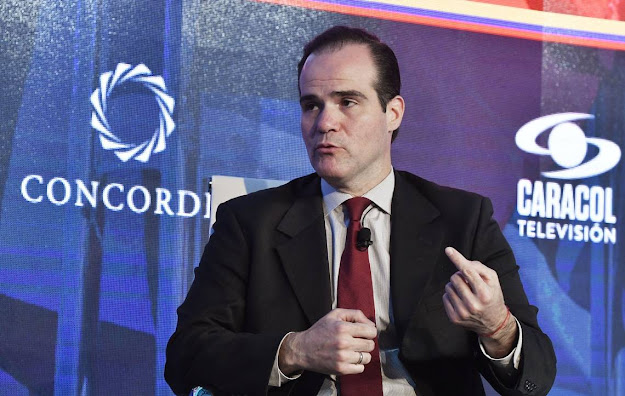 In his high school days in Florida Mauricio Claver-Carone was known for going "berserk" at any mention of the Cuban Revolution. His adult life has been raising and collecting "berserk" amounts of money to overthrow Revolutionary Cuba, including wads of dollars to help put anti-Cuban zealots in Congress and wads of dollars to influence things such as the infamous Helms-Burton Act that Congress crafted to overthrow Revolutionary Cuba while also, of course, making rich anti-Cubans much richer. But now...beyond Helms-Burton...Mauricio Claver-Carone, as the Trump-anointed President of the World Bank, can dole out billions of dollars to further his "berserk" obsession, which is to overthrow Revolutionary Cuba...presumably so Little Havana in Miami can reclaim Cuba as in the luscious, herculean days of the 1950's when the U. S. teamed with the Mafia to support the brutal Batista dictatorship. WONDERFUL!!!!! With Claver-Carone now the President of the World Bank in Washington, it can truthfully be said that LITTLE HAVANA has finally completed its quest to extend LITTLE HAVANA'S money-crazed rule of Miami to Washington. 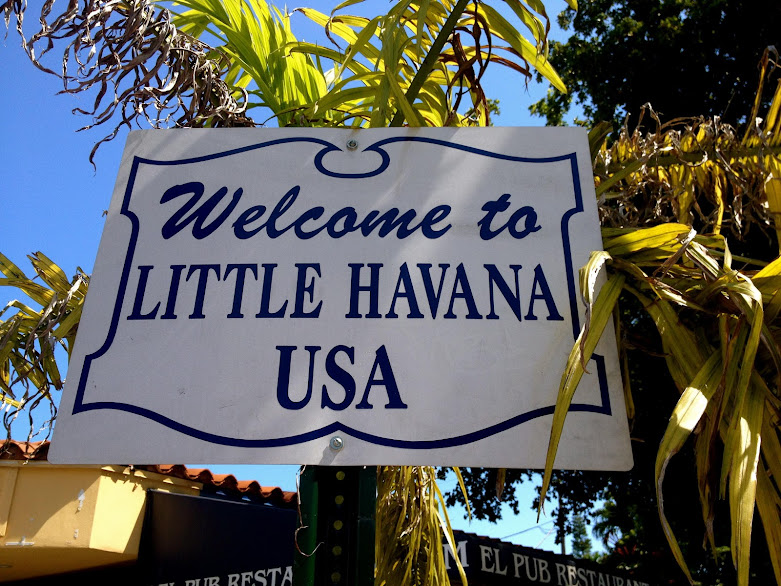