As The Hard Part Begins 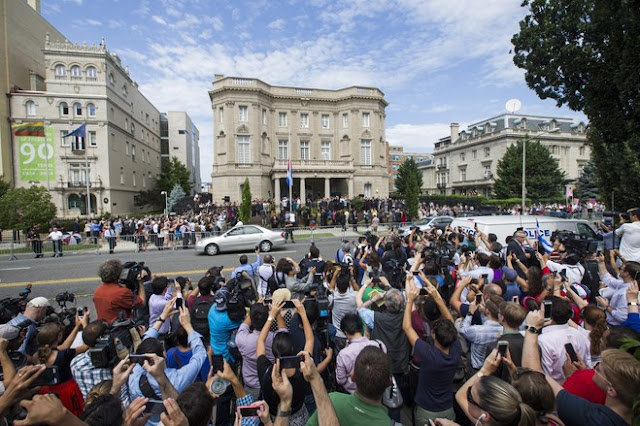 Yesterday -- July 20th, 2015 -- was an historic day in U.S.-Cuban relations. This Wall Street Journal photo shows the opening of the Cuban embassy in Washington for the first time since 1961. An extremely bold and pragmatic U. S. President Barack Obama, in the homestretch of his two-terms in office, pleased most of the entire world -- everyone from Pope Francis to the majority of Cuban-Americans in Miami -- with his Herculean efforts to normalize relations with the nearby island. The opening of embassies in Washington and Havana is emblematic of that boldness. Yet, it displeases a visceral array of Miami Cubans, behemoths who are both rich individually and powerful politically. Thus, the hard part, and the most dangerous part, now commences with what will certainly be a continuum of stupefying confrontations pitting a majority against a minority that is, at best, merely a standoff, like a small nuclear nation holding its own against a much larger, non-nuclear nation. The world's greatest democracy has proven incapable of dealing democratically with Cuba. And surely, that scenario will not end anytime soon, unfortunately. 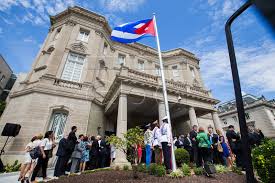 Still, this was a truly remarkable scene in Washington yesterday as the Cuban flag was raised in front of the stately mansion that will now be home to the Cuban embassy. Yes, those were three Cuban soldiers standing at the base of that flagpole, ceremoniously guarding the Cuban flag on U. S. soil. For sure, Mr. Obama has a legacy whether or not the diplomacy he has orchestrated succeeds. He at least has tried. The building housing the Cuban embassy in Washington is magnificent. 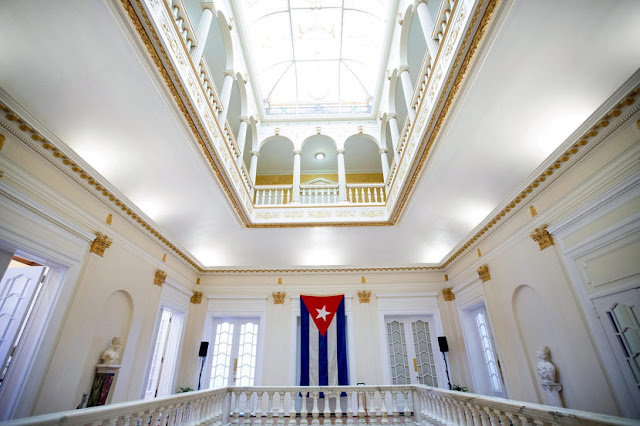 Inside the huge mansion is ever more ornate and more magnificent. 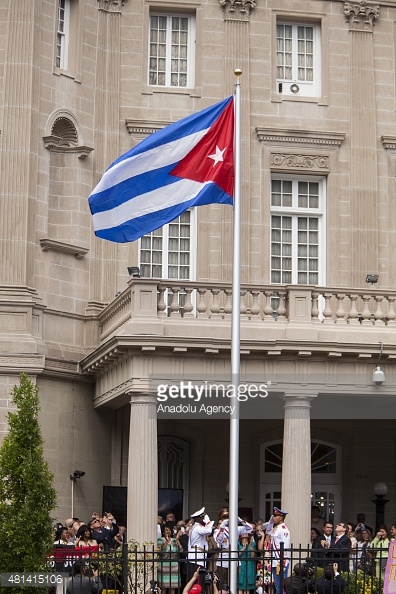 And did I mention the Cuban flag now flies high in Washington? 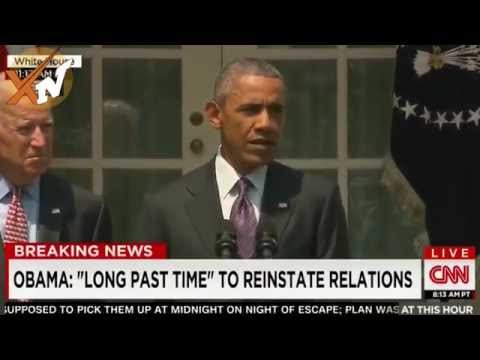 President Obama went on television to explain his gigantic Cuban overtures: "It is long past time to resume relations with Cuba. We must not be imprisoned by the past. This is a new chapter with our neighbors in the Americas." With those three sentences, a brave President was reminding the world that he is ashamed that America's Cuban policy has hurt the United States in the unanimous opinions of all other nations in the Americas -- namely the Caribbean and Latin America. He is also aware that such unanimity does not faze a handful of Miami Cubans who believe their views and goals should supersede America's. 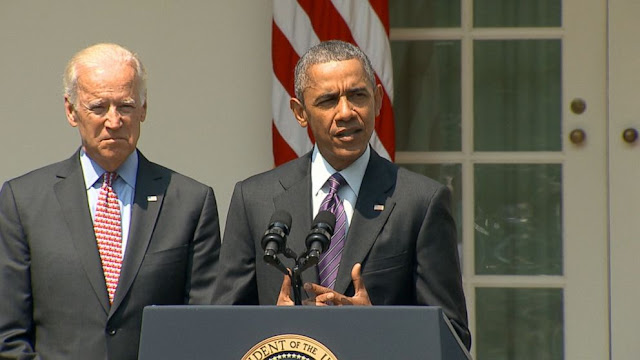 President Obama; July 20, 2015.
"It is long past time to resume relations with Cuba."
"We must not be imprisoned by the past."
"This is a new chapter with our neighbors in the Americas." 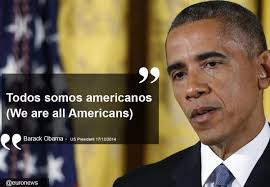 "We must move forward with Cuba, not backwards."
It took a brave and decent President to utter those four quotations. 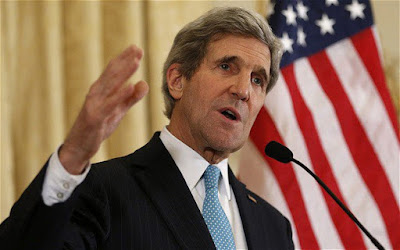 U. S. Secretary of State John Kerry will be in Havana on August 14th to attend the ceremonial opening of the U. S. Embassy in Cuba. Meanwhile, thanks to Obama and Kerry, the embassy is already opened. 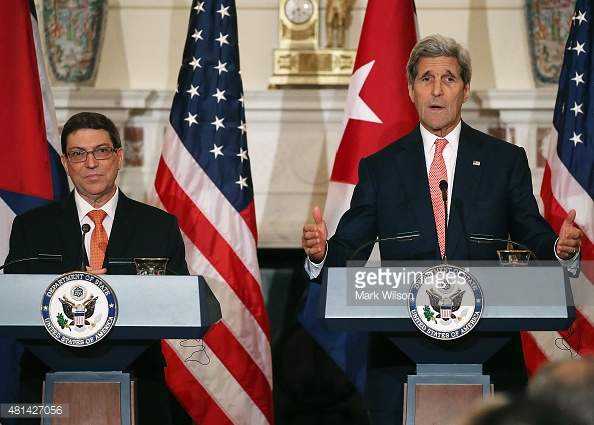 Yesterday -- July 20th, 2015 -- Cuba's Foreign Minister Bruno Rodriguez and America's Secretary of State John Kerry held a joint news conference to explain the opening of embassies in Washington and Havana. Mr. Rodriguez said, "This is a new beginning for our two countries and for our region." Mr. Kerry said, "Nothing is more futile than trying to live in the past." The aforementioned six quotations -- four by President Barack Obama, one by Foreign Minister Bruno Rodriguez, and one by Secretary John Kerry -- are, of course, indisputable. Yet, there remains a vicious and self-serving few who will not only vigorously dispute them but they also have the ability to dictate to the U. S. media how to vilify them. 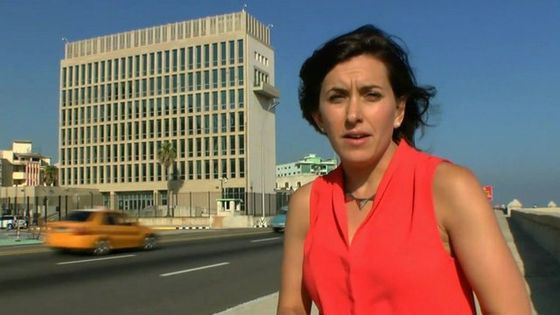 Generally speaking, the U. S. media, especially cable television "news," are too intimidated or too politically and socially correct or simply too inept to fairly cover U.S.-Cuban relations. However, London's BBC is not nearly as restrained in those three vital journalistic areas. The BBC this week has one of its best reporters, Katy Watson, in Havana to cover the reaction of Cubans to the opening of embassies in Washington and Havana. That's Ms. Watson above standing between Havana's famed Malecon seawall and America's new 7-story embassy. Her BBC report expressed the fact that the vast majority of Cubans on the island are both excited and enthused about the thawing of relations between the two nations. Ms. Watson, unlike U. S. journalists, also utilized her freedom to call the U. S. embargo against Cuba "a blockade" and define it, in the view of most Cubans, as "the longest genocide in history." In other words, Katy Watson of the BBC has the courage and the integrity to report on both sides of the two-sided Cuban conundrum.

This map says, "Guantanamo Bay (USA)." That's one-side of a two-sided story. Cuba calls it "Guantanamo Bay, Cuba." That's the other side. All the Caribbean and Latin American nations, as well as the United Nations, agree with Cuba regarding the rightful or wrongful ownership of Guantanamo Bay. Miami Cubans believe having a U. S. military base on Cuban soil shames Cuba. Most non-Miami Cubans believe it shames America, reminding the region and the UN of past imperialism and U.S.-backed dictators such as Batista, Trujillo, Somoza, Pinochet, etc. President Barack Obama and Secretary John Kerry seem intent on erasing or easing such shame between now and the advent of the next presidential administration in 2017. 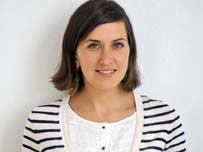