The Origin of Banana Republics

Even Where Democracy Once Reigned

Meet Orville Lee Wollard. Even if you were an expert at using the Google search engine, you would have a hard time finding a more decent, passive, crime-free, successful person than Mr. Wollard. He has a Masters degree and was a highly respected college professor. He is now 58-years-old and has served six years of a mandatory-without-parole 20-year sentence in a Florida prison. If he survives, he will be 73 when his sentence is completed. I understand that you probably are not interested in Mr. Wollard's problems. However, if you are interested in the preservation of democracy, I believe you should research how Mr. Wollard was criminalized by a Florida judicial system that is famed for not criminalizing renowned criminals, especially when the issue involves Cuba. After your research, I believe you would conclude that Mr. Wollard should have been praised and given a medal for performing a deed on behalf of his family that got him a compulsory 20-year prison sentence in Florida, a state that, since the triumph of the Cuban Revolution in 1959, has, in many discernible respects, more resembled a Banana Republic than the Banana Republics created in the 20th century.

This is Mr. Wollard and the family that he defended so heroically. {NOTE: He was asleep in bed recovering from surgery when he was awakened by his older daughter and informed that his younger daughter, 16, was being loudly and brutally assaulted in her bedroom by a young man who was 17 and was known to be "violent" and a "drug user." He got his very legal pistol, entered the bedroom, and when the young man came at him with clinched fist, he fired one harmless warning shot into the wall, chasing off the attacker. Two months later, instead of being awarded a medal for defending his daughter, he was sentenced to 20 years in a Florida prison without the possibility of parole} To comprehend his predicament, "Orville Lee Wollard" is how you should begin your Google search, not because you care a whit about him or his family but because you care about yourself, your family, and maybe even democracy. The comprehension of Mr. Wollard's plight should include a basic understanding of what the term "Banana Republic" means, starting with how the American democracy gave birth to them.

Judge for yourself whether or not South Florida resembles a Banana Republic.

This graphic makes the point that Banana Republics were created in the Caribbean and Latin America by rich American businessmen who had the military and financial support of the U. S. government. The strategy was to install their own military strongmen in helpless and poor nations that were blessed with coveted natural resources that could be siphoned off. Andrew W. Pearson's Boston Fruit Company pioneered the practice and by 1929 it had evolved into the United Fruit Company that owned or controlled 650,000 acres in Honduras, plus the country's railroads and ports. Indigenous Hondurans were utilized in slave-like conditions till they revolted in 1932. That's when U. S. troops were used to back up the foreign fruit barons. By the 1950s, World War II hero Dwight Eisenhower, a good man, was U. S. President. But Ike was old, tired, and very malleable. Ike's key aides -- especially John Foster Dulles {Secretary of State}, Allen Dulles {CIA Director} and Henry Cabot Lodge {key adviser} -- had financial interests in the United Fruit Company as well as dire influence over the U. S. military and the U. S. treasury. Ed Whitman, the United Fruit Company's primary PR man, was married to Ann Whitman, Ike's personal secretary. With those connections, the United Fruit Company had no trouble getting the ubiquitous help from the U. S. military and the U. S. treasury to support pillaging helpless nations. It was as easy as taking candy from a baby.

From 1776 till today, perhaps the greatest weakness of the U. S. democracy has been the ability of leaders to classify, or hide, their worst deeds from the American people who need to know such things in order to function democratically. Sometimes dastardly deeds are hidden forever to protect the perpetrators but often, usually decades too late, some things are de-classfied. Note above that in 2003 the U. S. government released a CIA document that was written on May 12, 1975 when the CIA finally confessed to some of its role in the overthrow of the democratically elected Arbenz government in Guatemala way back in 1954. You will note that the de-classified document was stamped "release as sanitized" to indicate that far more damaging details were still being kept from the American people. 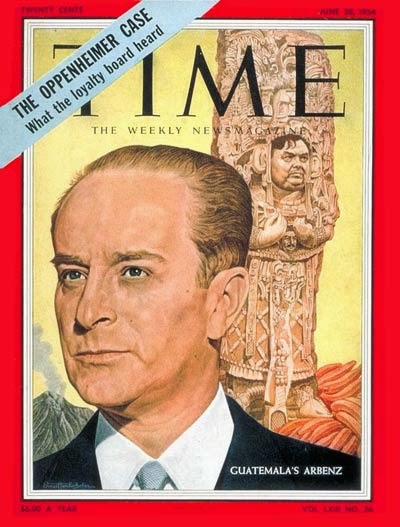 Today Guatemala's Arbenz is remembered fondly for what he tried to do for his people.

But the United Fruit Company, getting no resistance from helpless countries or from the unwitting or uncaring American people, was not stymied by the bad publicity it got from the eviction of Jacobo Arbenz Guzman's democratically elected Guatemalan government. Thus, the United Fruit Company envisioned finishing off the Latin American map, even including Brazil, Argentina and Chile as this map suggests. Three young women in those three countries -- Dilma Rousseff, Cristina Fernandez, and Michelle Bachelet -- objected to the United Fruit Company as much as the young doctor Guevara and the young lawyer Castro. So, it is worth noting that in the year 2014 Rousseff, Fernandez and Bachelet are the democratically elected Presidents of Brazil, Argentina, and Chile. Trying to shed its image but not its lucrative foreign monopolies, the United Fruit Company in 1970 changed its name to United Brands Company.

While Americans may not know the history that binds the United Fruit Company to the United Brands Company and then to Chiquita Brands International, rest assured that Caribbeans and Latin Americans do know that nexus as an integral part of their history and heritage. It also has not one but two ironic and very pertinent twists: {1} The United-to-United-to-Chiquita nexus helped usher in the waves of democracy that began flowing across the Caribbean and Latin America in the 1970s; and {2} in its wake many observers believe that the United-to-United-to-Chiquita nexus, by helping to create the tsunami known as the Cuban Revolution, left behind debris that many observers believe includes a Banana Republic on American soil, namely South Florida, where most of the rich and powerful dictators in Cuba landed after fleeing the victorious Cuban Revolution. That changed, some say debased, the landscape of South Florida immediately and permanently and, over time, has altered the fabric of the American democracy.

This graphic by Warren Sloat came decades too late to help Guatemala. 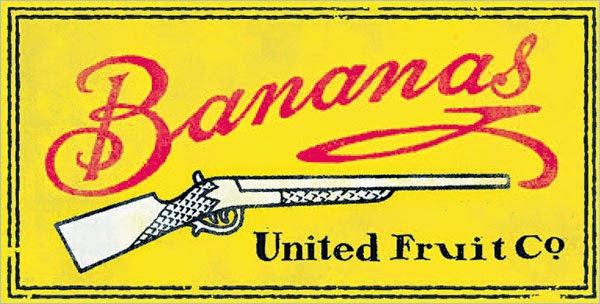